I headed up to Callicoon to visit friends this week-end so I didn’t hit too many bars, but that isn’t to say I didn’t have too many drinks. We will not go into any details about that though, Bar Man has an image to maintain. A somewhat blurry image to be sure, but an image nonetheless. 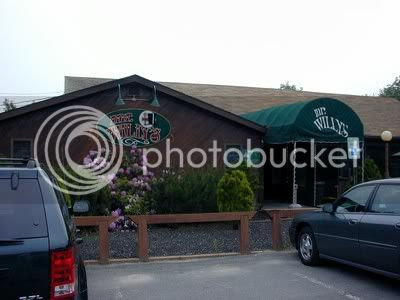 If you are ever in Monticello do not miss this place. It is great, from the service to the food. One time the Mysterious Chinese Woman and I came up here to meet friends for dinner. We took the bus and arrived about 3 hours before the appointed hour and 2 hours before the place opened. We knocked on the door and explained our plight and they let is in, gave us a couple glasses of wine, and let us sit and watch television and read our newspapers until everyone showed up. Now that is service with a capital S.

Maria, The Very Friendly Bartender This Evening
She made me take three pictures until I got it right. 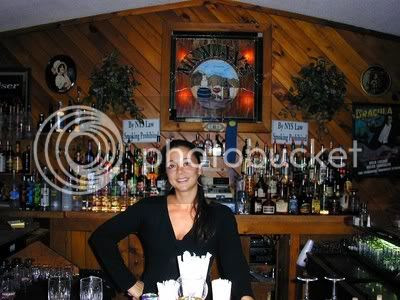 The bar has a comfortable recreation room feel to it, if you have a large recreation room. The bar is a light colored wood with a brass rail. The bar chairs have metal legs and wood framed maroon seats and back with a Mr. Willie’s logo in white on the backs. The walls are knotty pine and there are ferns hanging below two narrow skylights. There is also a large fish in a basket. The walls have pictures of the regulars and the softball teams that the bar sponsors hanging on them and they are illuminated by green glass shaded lights.

The Belmont Stakes was on television and major action was taking place. Twenty-five cent straight up bets. By the time I arrived there were only a couple of horses left so I ended up with Nolan’s Cat, a 50 to 1 long shot. Who says life is fair. When the gates opened the tension was so thick you could cut it with a butter knife. Needless to say I lost and The Judge cleaned up winning almost two and a half dollars in quarters. 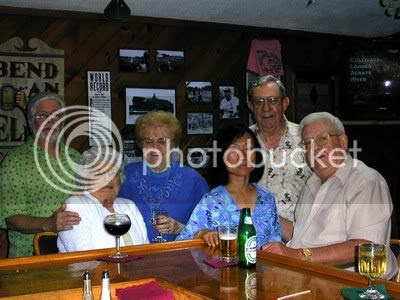 Shirley, it isn't my fault you made a silly face when the picture was being taken.

After the race we headed to the dining room and at least I ate like a winner. The King Kut prime rib could also be cut with a butter knife.

I had a V.O. and water at the bar, several actually, and a few more with dinner topped off by a Rusty Nail. Bar Man was not driving though so everything was cool.
Posted by Bar Man at 8:43 PM

Hi there, I was surfing the internet and I found your blog. I like the way how you have put it all together. I'll be coming back again.

how to sell a timeshare