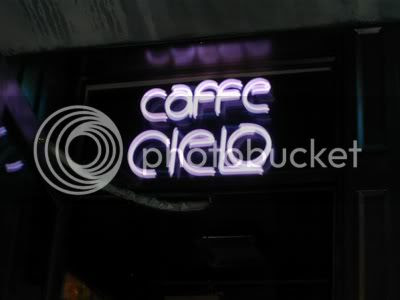 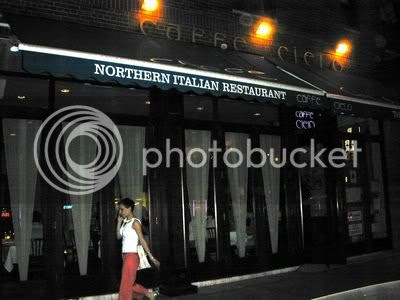 It was the Mysterious Chinese Woman’s floating birthday so fighting back the tears after not being able to get our Pink Squirrels we decided to go to Caffe Cielo for dinner. It wasn’t far away, 881 8th Avenue between 52nd and 53rd Streets. Staying true to my standards I bellied up to the bar and had a beer there before sitting down to dinner.

This is a pretty classy Italian restaurant doing a pretty brisk pre-theater business. It has a nice dark wood bar with a brass rail that runs pretty much the length of the place, although this isn’t a particularly deep space, fairly wide though and the front has a number of lace curtained windows. Mixed nuts on the bar to help spoil my appetite. There is a large mirror with cut glass edging flanked by two smaller mirrors behind the bar. Glass shelves in front of the smaller mirrors hold fancy bottles, glasses, and a picture of the owner’s lovely daughter. There is a tasteful painting of a nude at one end of the bar and a decent sized wine-rack at the other end. There is fairly hefty track lighting over the bar with baskets of ferns hanging from it.

The walls are mostly pale vanilla colored with a few sections covered with pale hued plaid patterned wall paper. There is a round, somewhat non-descript mottle circular depression in the ceiling that is intended to be decorative. I didn’t quite get it though. One marble column sits in the middle of tables that are covered with white linen tablecloths. Half nautilus shaped lights hang on the wall. The carpet is kind of a worn brown.

I had a bottle of Birra Moretti. 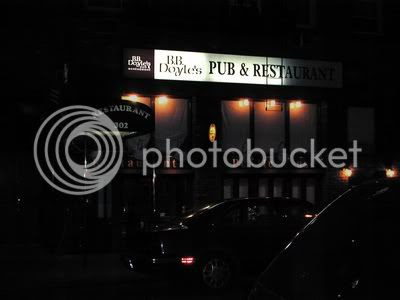 The downstairs, where the bar is, is a bit of an eclectic Irish pub. It is about five steps down from street level and has a somewhat beat-up wooden bar with a brass rail. The setup behind the bar is fairly standard, a couple of mirrors with the name of the bar etched into them, three televisions, tiered shelves holding the liquor, and a large chest full of ice and beer.

The walls are kind of a pale green with multi-colored rectangles of various shapes gave the place a bit of a retro 1950’s look. Lights mounted on the walls were curved metal with square cut-outs. There are three televisions in the back. Two smaller ones and one fairly large one surrounded by what looks like a large wooden picture frame. The floor is a very nicely tiled. There is a fairly large recessed fish tank but, alas, no fish. The last one went to the great beyond just a short time ago. They are going to be closing for a bit to do some remodeling (but the retro-look will remain the same) so they aren’t going to get any new fish for awhile. Somehow the discussion of the deceased fish turned to the parrot that used to live at Montero’s that also passed away and then to a discussion of parrots in general. Funny the conversations that occur when you have had a few drinks. The bartender, waitress, and the guy sitting next to me were all very friendly and interesting so this would be a great place to make a regular watering hole if only it was a bit closer to where I lived.

I didn’t get upstairs but they have a dining area up there that looks, from the pictures, to be very nice.

Just two for the day, one more than planned though, but no Pink Squirrel. This made 549 for the day and leaving 451 to go.
Posted by Bar Man at 7:45 PM

As a gift to the Mysterious Chinese woman for her floating birthday, Barman 100 Bars will be engraved on an aging barrel of Makers Mark Bourbon.
Love, Barmans Sister.

Thanks for you visit said...

I Really think you have a great blog here, and see you have a very high page ranking, I found this info out from this page. http://pr.blogflux.com/ Try it out.

I have several pages of my own,

I'ts about femme Clothing. This site is in French language.
My second site is about Chaussures that is Shoes in french and bottes that is boots in french.

My Third site is about Chocolate that is made in France. The Frech language just drops to e at the end so it is chocolat

I will add this blog to my favorites right away. i run a website based on personalized wedding gifts and think you will find it a useful resource.

##NAME##, I think I love you. Well, I know that I'm in love with your blog. Just 30 minutes ago, I was searching for ##LINK## websites and I'm blessed to run into your blog from surfing. Great Information!

Although ##TITLE## wasn't quite what I was searching for, I must say I am truly impressed. Keep up the great work I love your information! I was searching for ##LINK## related sites but I'm so lucky to had found your blog ##NAME##. Thank You!

Interesting blog, be sure and check out my site / blog when you get a chance at www.shoes-apparel-discount-fashion.com/ Thanks and have a great day.