Dive Bar is affiliated with Tanner Smith's and has been around a lot longer. Twenty-seven years longer. Great place and one I had never been to before. New York City is like a lot of different villages and this is one I don't get to very often. Upper West Side about a block from Central Park. 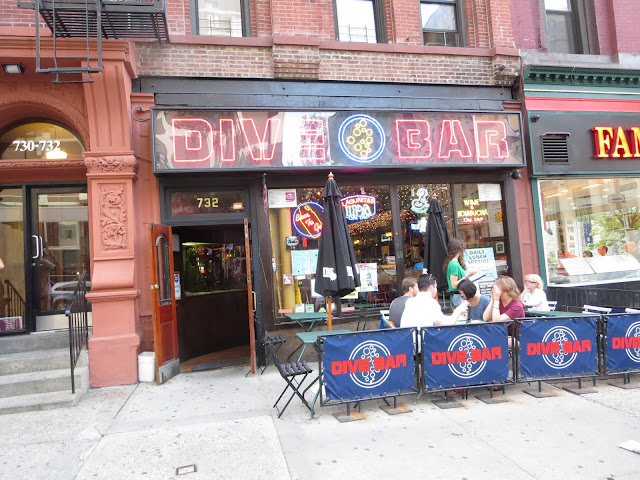 This place, like Tanner Smith's, was packed. Pretty much a sports bar with a lot of televisions and a bunch of softball teams drinking pitchers of beer. 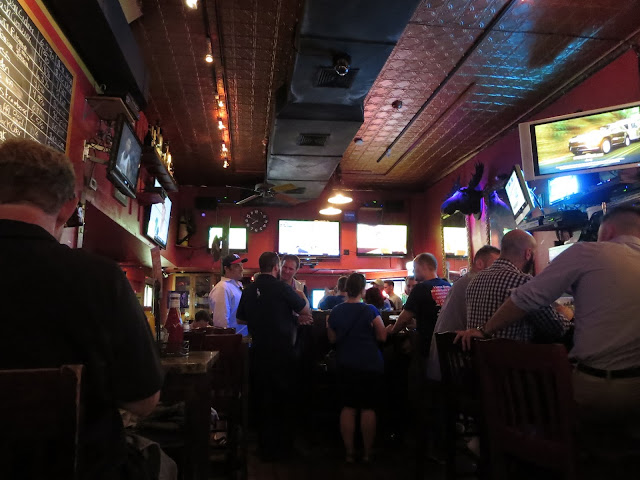 A representative from from Central Waters Brewery was there showcasing some of their offerings. I only had one of their beers though because, well, the one I had, Bourbon Barrel Cherry Stout, was 10% ABV and they went up from there. 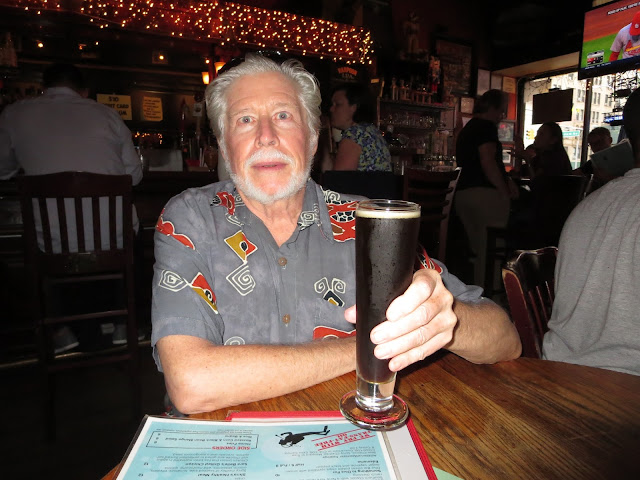 This was quite the beer, and you will probably never have a chance to drink one unless you hurry. Only four kegs were shipped to New York, and only two to New York City. Dive Bar got one. I think they do sell it in bottles, though.

This beer had more flavor than just about any beer I have ever had. Lots of toffee and coffee with just a hint of cherry. And the flavor just stayed in your mouth for a long, long time. It would be a great winter beer, but I can't see drinking more than one at a sitting. Well, I can, but I would probably regret it. Aw, hell, Who am I kidding? I wouldn't regret it at all. It is aged in used bourbon barrels and at the end aged for another week or two with cherries.

I had an Elysian Split Shot Espresso Milk Stout (5.6% ABV) afterwards and under normal circumstances I would have thought that was a flavorful brew. After the Bourbon Barrel Cherry Stout, though, it tasted thin. The (Mysterious Chinese Woman) said it looked like a Guinness, and she was spot on. Like Guinness it is kept under nitrogen. This is brewed with Stumptown coffee and the flavor really comes through.

Started out the evening with a Bell's Amber Ale (5.8% ABV) and that was also quite good. Like Tanner Smith's they have a really nice beer menu here. I was going to just have a half-pint but it was happy hour and the waitress said I had to have a pint for the same price. Who am I to argue?

Food here was really good as well. We started with the bourbon chicken wings, spicy and tasty. Then we had a catfish taco that was also very good. I will be back even, though it is a bit of a subway ride.

Now this wasn't your traditional dive bar, but there was a dive theme to it. 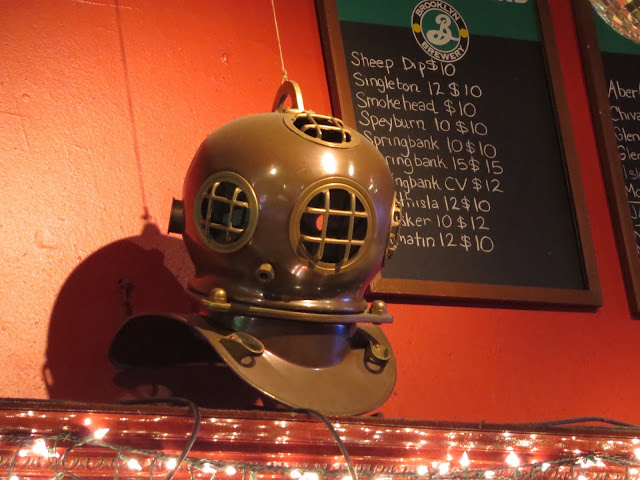 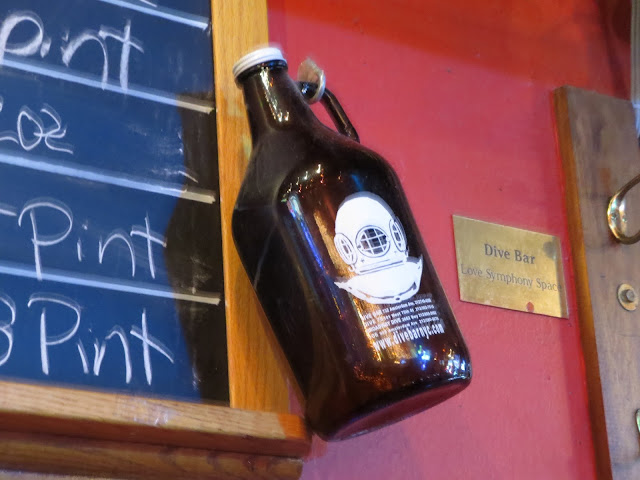 Not sure how the moose fit into the theme, though. Maybe one of the owners shot it, or had it for a pet, or something. 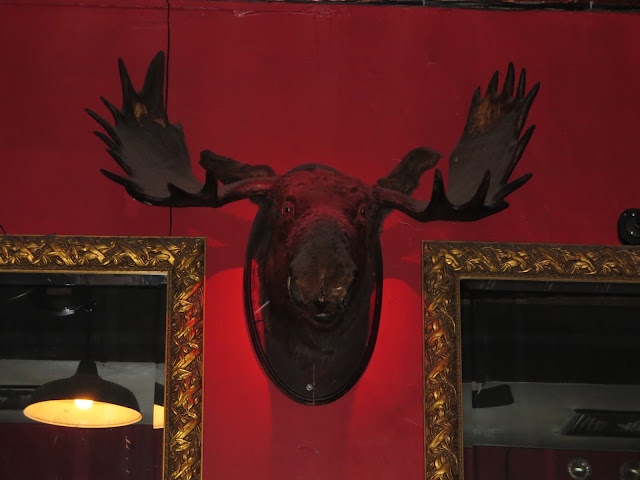 I hope they aren't heavily into recycling here. And I hope that just drains and doesn't go into one of their beer lines. 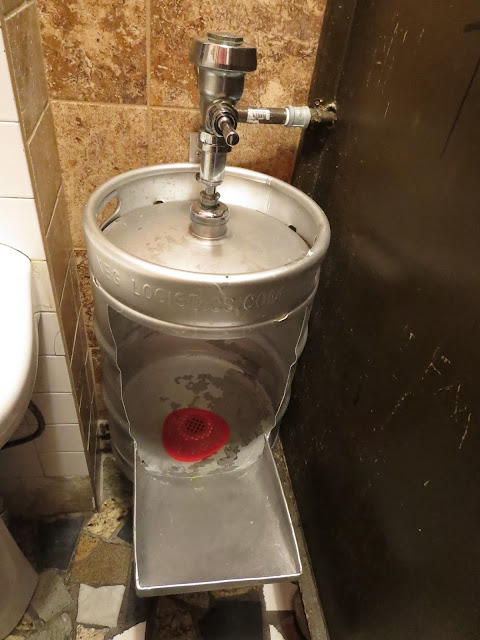 Had a great time and now I will have to try the third bar these guys own, Three Monkeys.

I was invited to a beer tasting last night at a fairly new bar and restaurant, Tanner Smith's. I was quite impressed. The place was packed when I got there, but not with people for the beer tasting. There were only about eighteen of us at that. It was for people who blogged or wrote about beer. I guess I got grandfathered in, somehow.

It was a nice tasting, eight different beers and each paired with a small dish. First, let me say the small dishes were excellent. They make everything (well, not the beer) on the premises and I will definitely make a return visit. An owner of the place introduced himself and the person conducting the tasting was a nephew of the owner. Very friendly people.

But on to the beers, in the approximate order that I remember drinking them.

First was Tricycle Grapefruit Radler from 49th Parallel Brewing. This was a low alcohol (3.5% ABV) that tasted pretty much like grapefruit juice. I could not really discern any alcohol at all. It is refreshing, but I would just as soon have a Greyhound with a bit of a kick to it. At Tanner Smith's they use it as an ingredient in some of their cocktails, but I think plain grapefruit juice would work just as well. Not exactly my cup of tea.

American Honey Blonde from Yonkers Brewing. A bit stronger (4.5% ABV) and made with Hudson Valley honey. It isn't sweet and I didn't discern any notable honey flavor. It is a bit tart with nice maltiness and a bit of hops back-end. A nice drinkable beer.

Downright Pilsner from Port City Brewing. Moving up a bit in alcohol (4.8% ABV). I found it to be quite dry. Has a bit of a murky color and didn't really appeal to me.

Labrador Lager from Thirsty Dog Brewery. Now this one I really liked. This was a beer with some meat to it (6% ABV). It was very smooth with what I thought was a dry, faint citrus, after taste. It is a Dortmunder style lager which is similar to a pilsner but the water they use is a bit sulferic (not that you would notice) and that is supposed to bring out the hops. It is also a bit more carbonated than the average beer.

Citradog IPA from Thirsty Dog Brewery. This beer has a lot of citrus notes to it, all from the Citra hops that are described as a high acid alpha hop (not sure what alpha hop means) with a strong, yet smooth, floral and citrus flavor and aroma. It was both citruy and hoppy and had a bite to it at 6.5% ABV. Very drinkable but citrusy beers are really not my thing.

Simtra Triple IPA from Knee Deep Brewery. Well, this could get you knee-deep in trouble if you drank much of it. Quite strong (11.25% ABV) and very bitter, as you would expect a triple IPA to be. It uses the Citra hops along with Simcoe hops, and hops you will taste. It is a real stomach warmer and I quite liked it. Probably would never have more than one, though. A pint would do a job on you, especially if you drank it like a beer instead of sipping it like a wine.

Mudpuppy Porter from Central Waters Brewery. This was a nice, mild (5.5% ABV) that went down smoothly. One of those porters that you could drink on a hot day. Your basic porter taste, somewhat coffee and chocolate, but nothing over-powering. Very drinkable.

Siberian Night Imperial Stout from Thirsty Dog Brewery. Now this was kind of like a good balance between the Sinatra Tripple IPA and the Mudpuppy Porter (9.7% ABV). You get plenty of flavor, chocolate, coffee, and toffee with the bitterness of an IPA. I liked the bitterness because often Imperial Stouts can be a bit too sweet and cloying for my taste. This was most excellent and would be a nice after-dinner drink. It would pair well with a chocolate dessert. Or you could just guzzle a couple of pints like I would probably do.

My hats of to Tanner Smith's for throwing a most excellent beer tasting. I had never even heard of, let alone tried, any of the beers before. The hosts were very friendly and knowledgeable and I thoroughly enjoyed myself. The owners have another bar, Dive Bar, on the upper west-side of Manhattan and I plan on visiting them tomorrow night. I will try to take some pictures this time. My camera battery went dead and I didn't have my cellphone with me. My bad. They also own Three Monkeys Bar on 54th so that is also on my list for a future visit.

By the way Thomas "Tanner" Smith was somewhat of a rogue, the founder and leader of an Irish gang called the Marginals who met an untimely demise, shot in the back while playing poker.