Kids, Don't Let This Happen To You

Bar Man will be posting yesterday's journey a little bit later. Some tactical errors were made. Two delicious Belgian style beers at the second stop followed by three Saphire Bombay Martinis at the appropriately named Buzz Bar. I blame this on Chris, the guy who was doing a photo shoot of me. Bar Man is hardly ever to blame for anything. This was followed by meeting a couple of friends (Ron and Ben, are you reading this) at Fraunce's Tavern and more Bombay Martinis. I couldn't even count Fraunce's because I have been there already. I am only going to one place today but it should be a doozy. I am going to have a Pink Squirrel at the Horseshoe Cocktail Lounge in the Howard Johnson's in Times Square. I hope it is still there. This was suggested to me by a loyal, but somewhat demented, reader named Jonathon Lewis and it struck a responsive note. It will be like taking Pepto Bismol.

Today is the Mysterious Chinese Woman's floating birthday. She was born in China under the lunar calendar so another of her mysteries is when she actually has her birthday. Sometimes, I know, she has several in the same year. She likes cake and candles. Mysterious Chinese Woman's mother always makes sure I know (I think she is slipped a bit of cake on the side for this service). 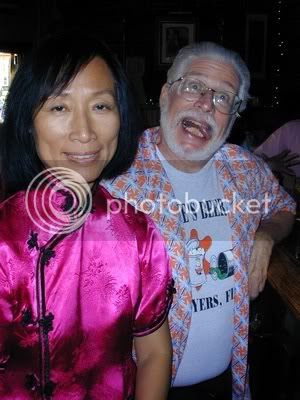 I have mentioned more than once how I got started on this venture New Year's Day when my brother-in-law and I went out to get milk and somehow hit three bars before we found the Supermarket. Those bars do get in the way sometimes. I am posting his picture so you can see the culprit. I think you can tell by the expressions on our faces who the instigator is.

Beware Of This Man 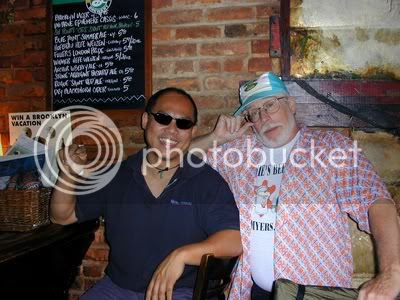 I am really impressed by your blog and was inspired to start my own blog "My Mule" for people who really read and write good. You are an inspiration and whenever I get in a pinch I will think WWBD What Would Barman Do