Well, not really pizza. But it is an easy to prepare breakfast or lunch that get's rid of your leftover pasta from the night before. This works well with almost any pasta dish but homemade pasta puttanesca is my favorite. I have also made it with leftover linguini in a white clam sauce though.

First step, and not necessary, you caramelize some onions. This is the most time consuming part because it takes a good hour over low heat to really get nice caramelized onions.

Quite Delicious When Finally Done 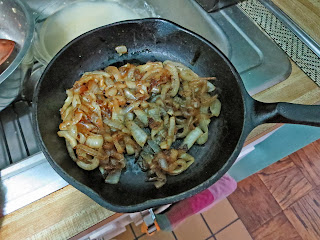 Then you grate up a bunch of Parmesan cheese. I find a small food processor works well for this, unless you really want to give yourself a workout. And don't be stingy with the cheese. 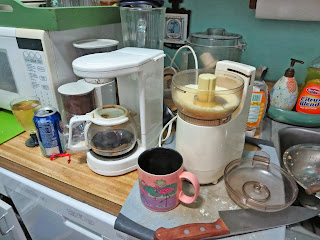 Now for the fun part, mix the leftover pasta (homemade pasta puttanesca in this case) with a couple of eggs and about a cup of the grated cheese in a bowl and then plop it into a frying pan (I prefer cast iron) with about a tablespoon of olive oil to coat the bottom. 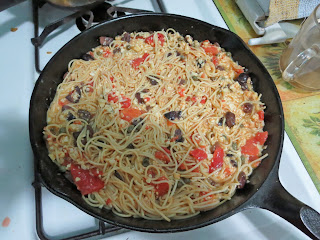 Now you just turn on the heat to a low medium and then leave it until bubbles start to form on top and most of the cheese is melted. Then you top it with about another quarter of a cup of grated Parmesan cheese and put it under the broiler for about ten minutes or until the cheese starts to brown. 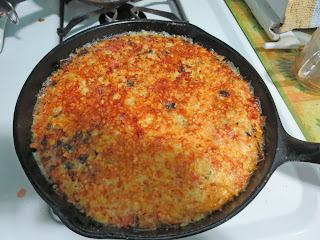 Next you top it with the caramelized onions. 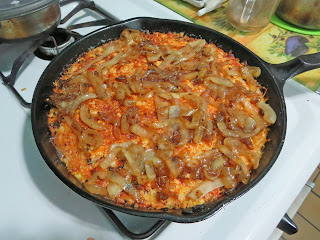 Well, not quite. I cover the pan with foil and let it rest for a good ten minutes. Otherwise you end up with a mouthful of hot melted cheese. Then I like to slice it like a pizza and have it with a nice glass of Chianti. 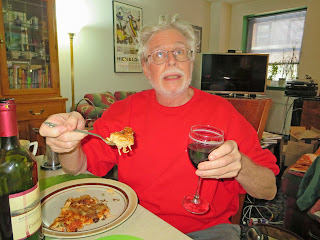 This is good hot or even cold if you have leftovers of the leftovers. The Mysterious Chinese Woman always makes extra pasta just so she can have this the next day. Try it, you will like it.
Posted by Bar Man at 2:50 PM 19 comments:

Wow, I actually got somewhat lost today, and in my neighborhood. I hope this isn't the early onset of Alzheimer's. I was coming back from my eye doctor in Manhattan and decided to take the N train back to Brooklyn instead of the usual local 6 to the Brooklyn Bridge and then transferring to either the 4 or 5 to Brooklyn. Anyway, the N skipped the stop where I usually get off (don't ask, it is the New York subway system). I got off at Atlantic Avenue/Barclays Center, another stop I am familiar with. But I exited somewhere, well, different. They have redone the station so there are new exits. With all of the new buildings and the mirrored front of the Barclays Center I got confused and started to walk the wrong way for a couple of blocks. Then, when I recovered my bearings, to my horror I discovered that Hank's Saloon now opens at 11:00 AM instead of 8:00 AM so I couldn't stop in for an Old Crow and water to steady my nerves that were unsteadied after that horrific disorientating experience. Luckily I could get a beer in a paper bag (hah, they ruled against stop and search, although I don't really fit the profile anyway) at a deli just down the block. I am better now.

For those of you not familiar with New York laws, you can't buy beer in a liquor store. Or anything other than liquor and wine. for that matter. No mix, no olives, no nothing. All beer is sold either in delis or bodegas (small convenience stores), grocery stores, supermarkets, beer distributors and, interestingly, drugstores. But even my local drugstore has a good selection of beers.
Posted by Bar Man at 3:33 PM 15 comments:

A buddy of mine, John, has been trying to drag me to his American Legion for the longest time. It is a bit out of my wandering range, a couple of miles away, but it was nice out yesterday so The Mysterious Chinese Woman and I decided to walk there. Well, we got there but no John. Oh well, for $1 gin and tonics and 50 cent glasses of beer I could afford to wait for awhile. But after a bit we decided to head down the street to pop into a place we passed on the way. 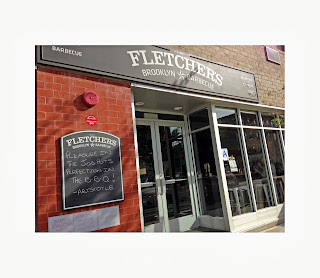 As you can tell, I am having a bit of a problem with pictures. The Mysterious Chinese Woman took these with her iPhone and I am not sure how to go about formatting them to get rid of that big white margin. Oh well, I will use my camera from now on.

Anyway, let me tell you that this little place is a real gem. I take pride in my own smoking and barbecuing, and I am not going to suggest that this place had better ribs than mine, but they did have dynamite ribs. Dry rub with sauce on the side, just the way they should be served. And Brooklyn Brewery's Sorachi Ace on tap. Sorachi Ace is named for the lemony smelling hops that were created by the Japanese in 1988 when they crossed the British “Brewer’s Gold” and the Czech “Saaz” hops. It is one of my favorite beers and is a relatively strong 7.6% ABV (Alcohol By Volume).

Aces Will Get You High

So I settled in and had myself some ribs and beer. Seemed like the thing to do.

What Could Be Better? 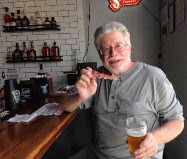 The people here were quite friendly, including the guy I was sitting next to. We discussed smoking and barbecuing and Matt, the Pitmaster and Executive Chef joined in. It turned out that he had spent time in Minneapolis and we liked some of the same music (Tom Waits, The Replacements, Hold Steady). Stuffed pork shoulders were coming out of the smoker and he generously provided us with tastes. Quite delicious. 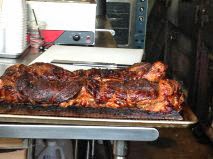 They did there own smoking on the premises and they had some pretty significant smokers.

A Bit Big For My Apartment 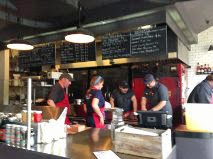 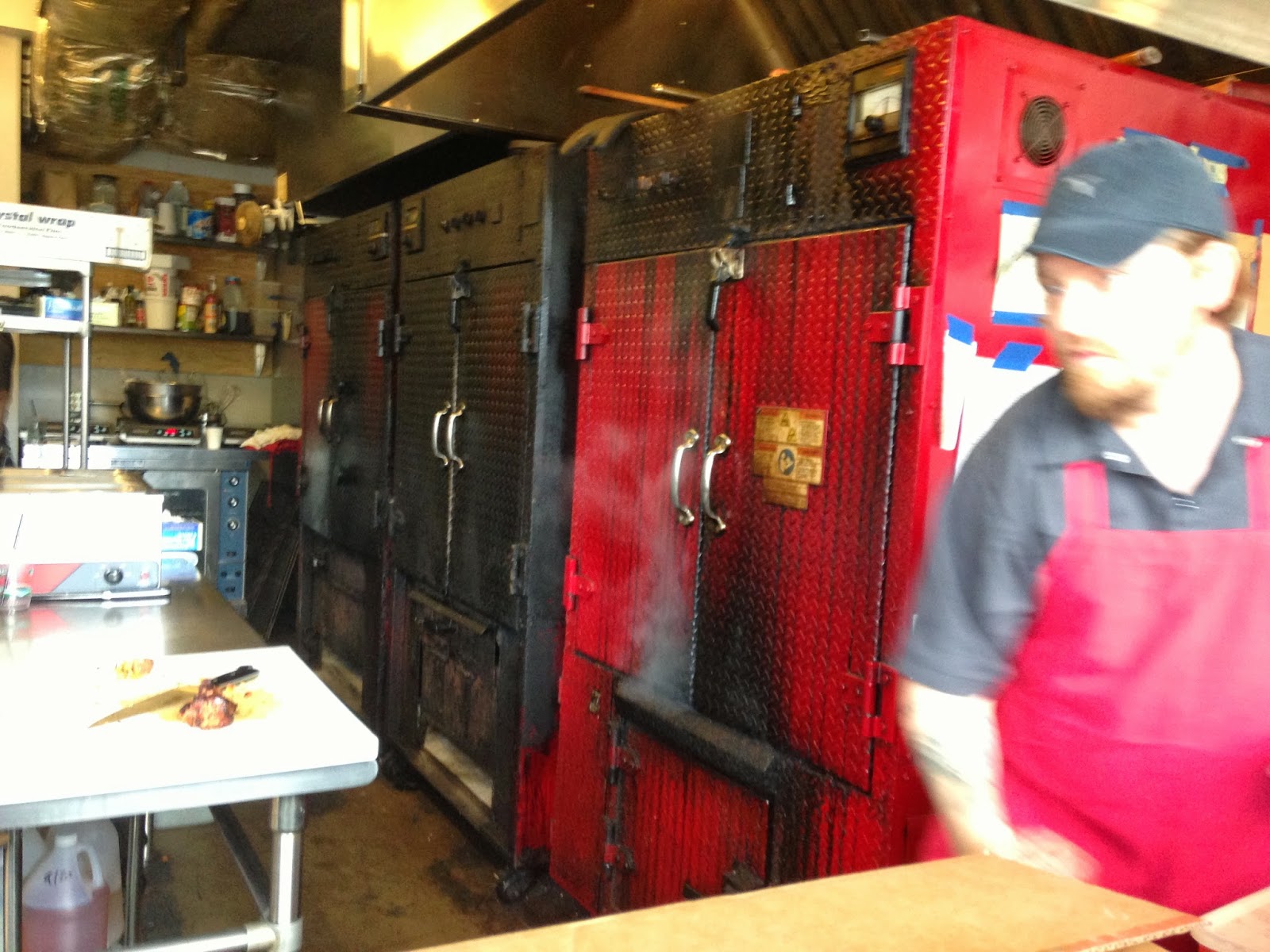 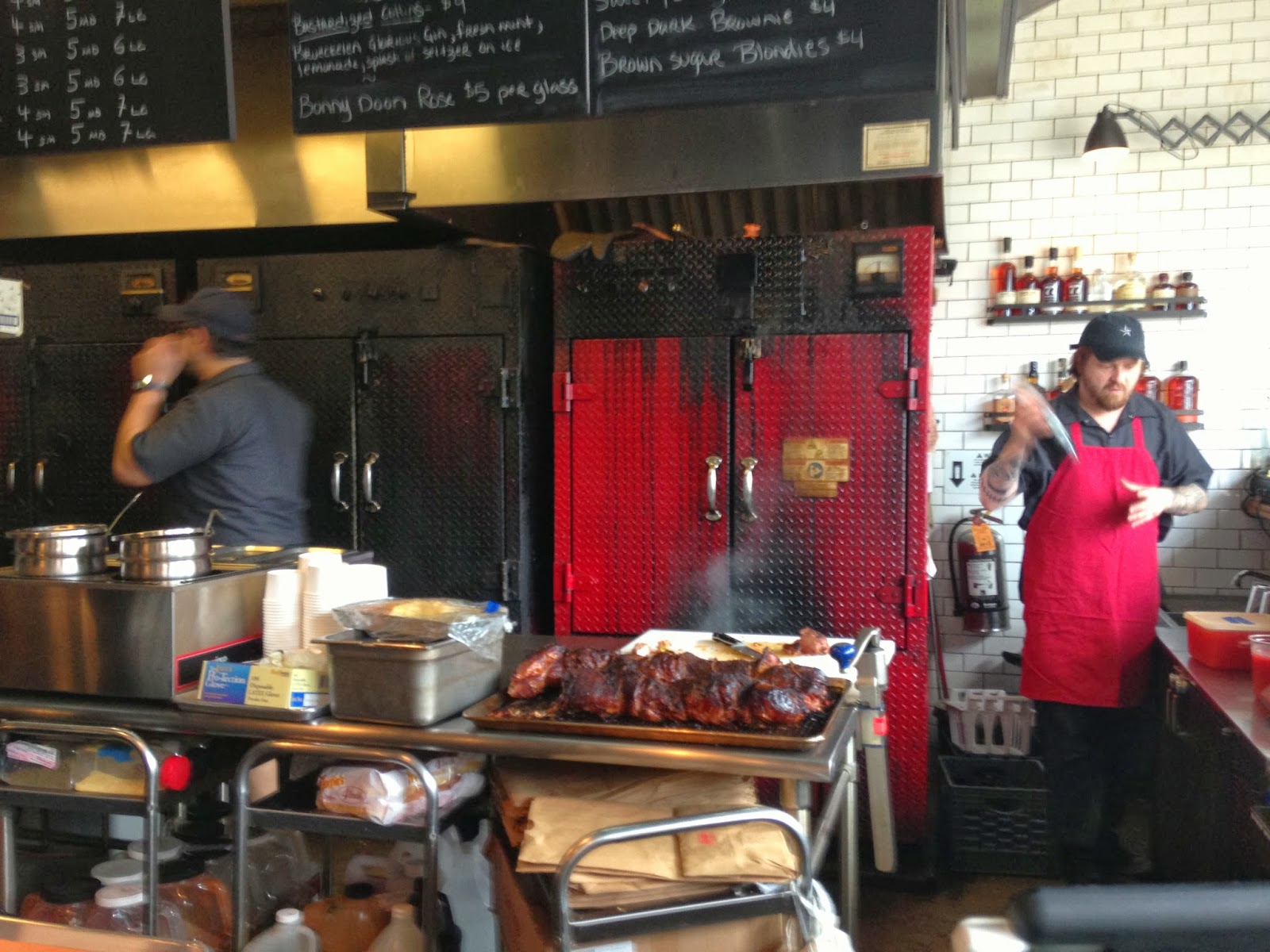 I can give a whole-hearted recommendation for this place. It is located at 433 Third Avenue in Brooklyn, between 7th and 8th Street. A bit out of the way but you can easily walk from two nearby subway stops and it is on a bus line. Well worth the trip. Oh, I did pop into Hank's Saloon for a quick Old Crow and water for old times sake. I hear that it only has about another couple of months left before the building is torn down and replaced with Who knows what? The place really should be land-marked.
Posted by Bar Man at 10:29 AM 4 comments:

Don't get excited, no more thousand bar treks or anything like that. But I have been going to some interesting places and I am beginning to miss blogging a bit after almost a year layoff. So if I do or see something interesting I will make it a point to blog about it. I have been far too lazy for far too long.

I did get potted at Harry Potter's favorite pub. 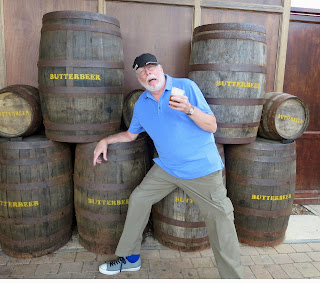