Went to a fun birthday party for my friend Arden. He is one of the many regulars from Pete's Waterfront Ale House who are kind of like an eleventh lost tribe. We tend to congregate wherever a former Pete's bartender is working or for special occasions. This was both and we congregated at the Hop Shop on Columbia Street in Brooklyn. 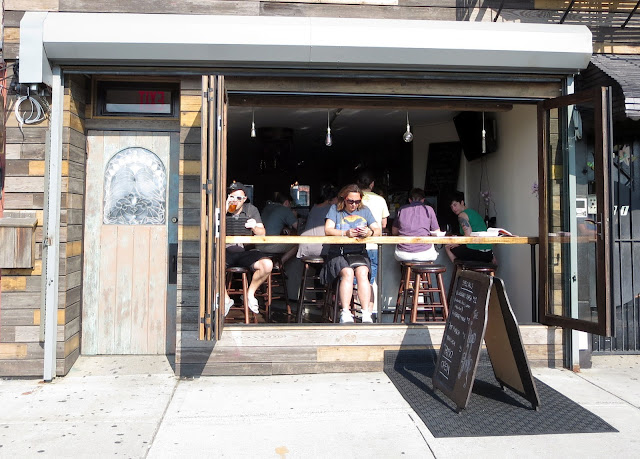 The Hop Shop is kind of waterfront if you consider the water to be the East River and the front to be across the street from a container terminal.

But hey, who goes to a bar for the view in Brooklyn? Well, maybe if you go to Ruby's in Coney Island. This is the view I was most interested in. 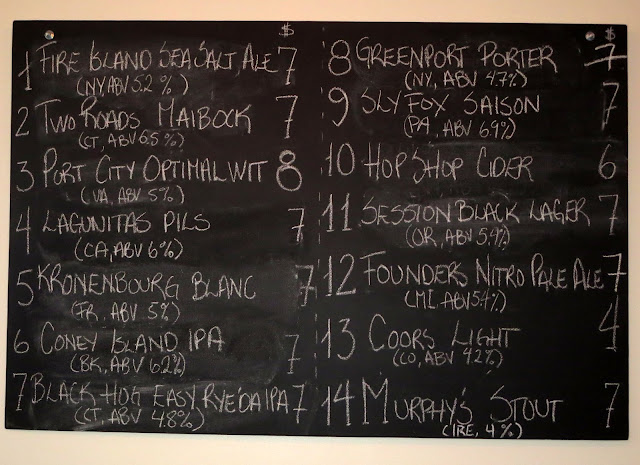 I started out with a Fire Island Sea Salt Ale. Not too strong (5.2% ABV) and a fairly hoppy IPA. Dry and crisp but I didn't notice any salt. And I sometimes put salt in my beer, especially 3.2 beer. Not bad. That was followed by a Sly Fox Saison that had more of a kick (6.9% ABV). A very good hot-weather beer. But enough about the beer, this was about Arden, the birthday boy. 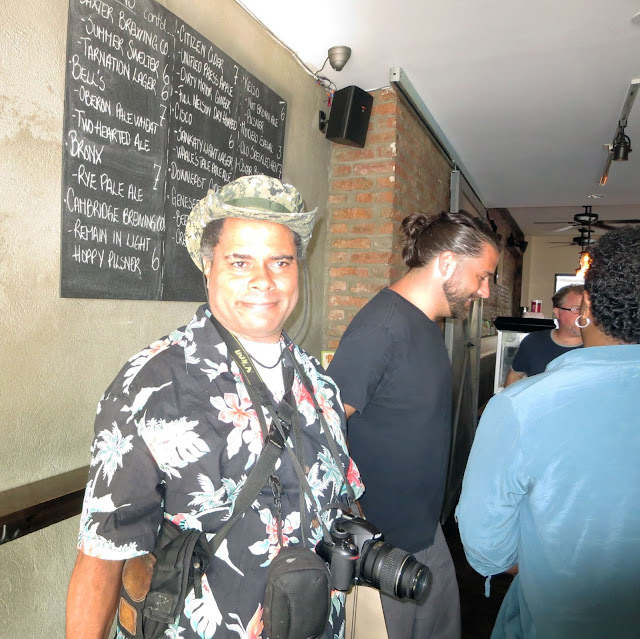 Quite a crowd turned out because Arden is a crowd favorite. And quite an accomplished photographer. I have been going to Pete's Waterfront Ale House since it was across the street from where it was before it closed. Arden has been going there when it was down the block, just Pete's, and was an ice-cream place. 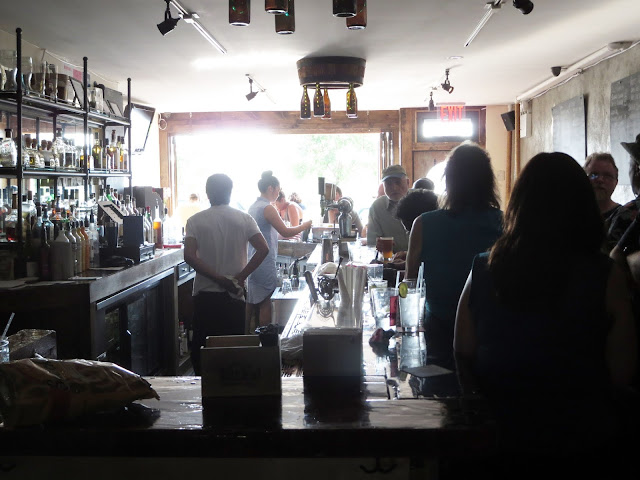 And no birthday party is complete with out cake or, in this case, cakes. 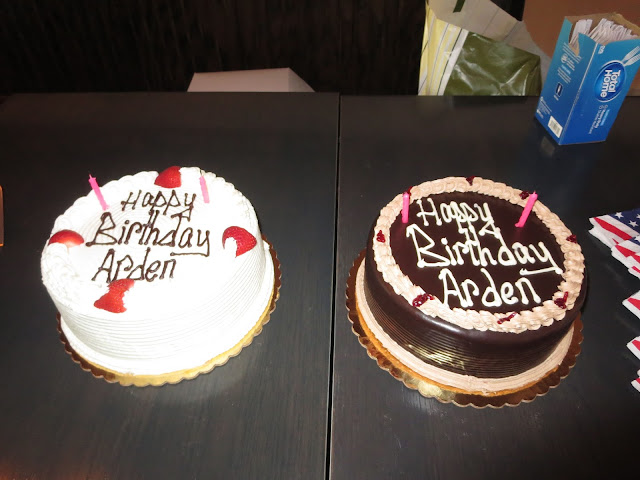 So for Arden this was great, two of his favorite things, cakes and taking pictures of cakes. Just doesn't get any better. 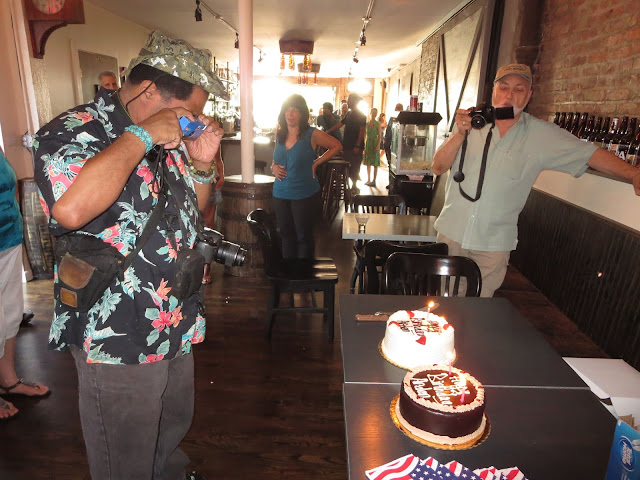 And food. The Mysterious Chinese Woman and I were heading out to dinner so I limited myself to a small Sloppy Joe and an excellent deviled egg brought by a former Pete's Waterfront Ale House cook. Just the deviled eggs. Not sure who brought the Sloppy Joes. 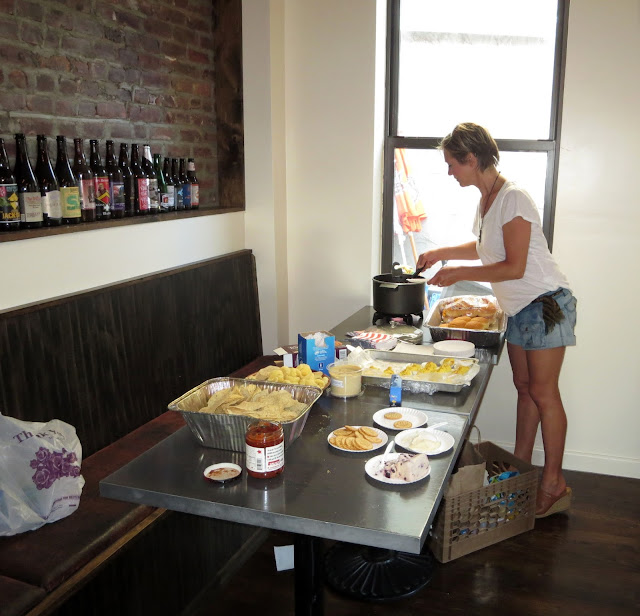 The Mysterious Chinese Woman had two pieces of cake. You can't stop her, you can only hope to contain her. She wouldn't let me take a picture of her eating it, but this is her with our friend Susan. 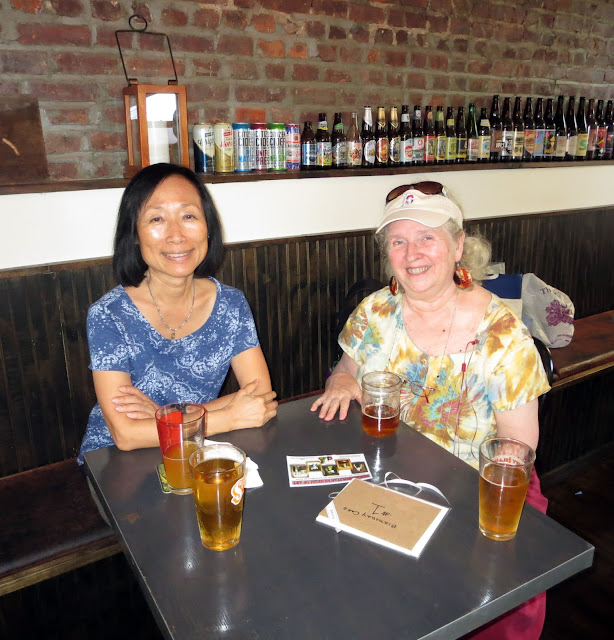 And here is Arden with more of his admirers. 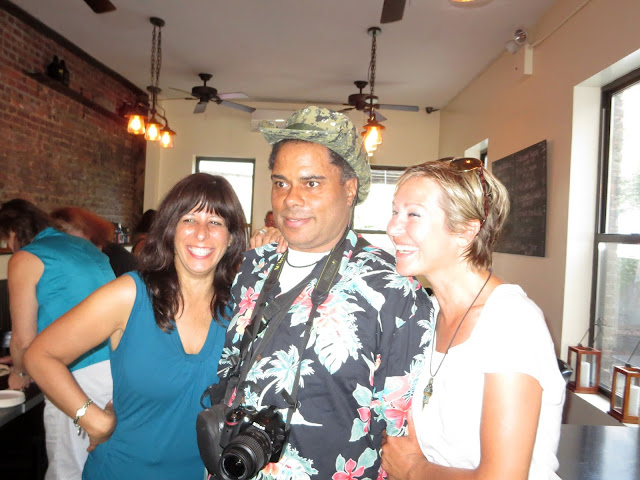 The Hop Shop doesn't have a kitchen, yet. They are in the process of putting one in. It does have a nice little outdoor area, though. I will probably re-visit when they start having food. 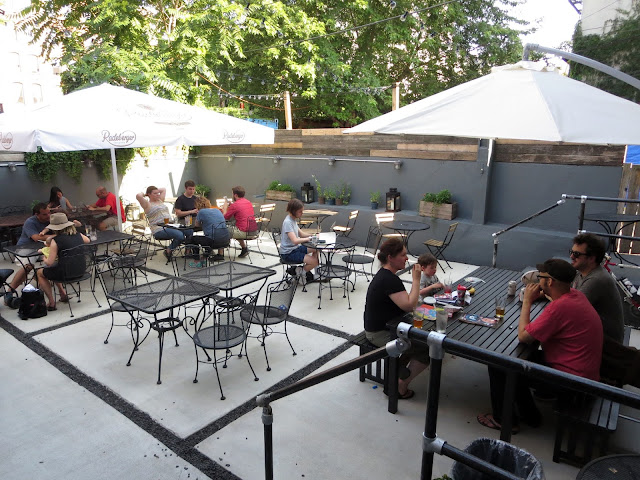 After the party was over The Mysterious Chinese Woman and I headed to a very nice restaurant that could easily become one of my favorites. 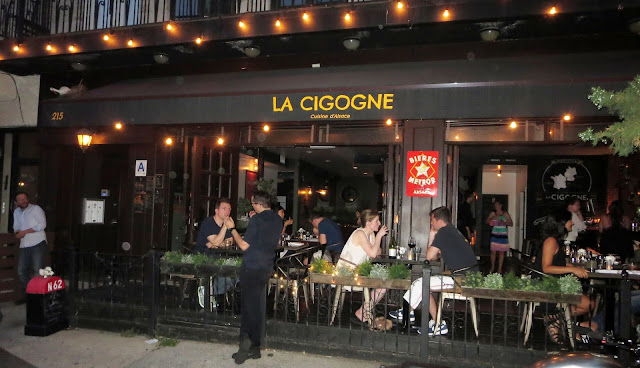 La Cigogne is an Alsatian restaurant and Alsace is known for their storks as well as for their food and wine. La Cigogne means stork in French but, disappointingly, there was no stork on the menu. I had a delicious beef stew over spaetzle but ended up taking most of it home. A couple of beers, the Sloppy Joe, as small as it was, and deviled egg kind of filled me up. The Mysterious Chinese Woman had no problem polishing off her pistachio coated salmon though. I don't know how she manages to do it. She only had one beer, but I don't really know what she ate at the birthday party other than the cake.

We had a nice time at the party, the meal at La Cigogne was very good, and even the Knicks game I recorded was okay. Only second-tier and newer players played, but Porzingus looked pretty good, twelve points, three rebounds and two blocks in eighteen minutes. Good free-throw shooter as well, which is somewhat unusual for a big man, for some reason. The game was worth watching just to see Clyde in a polo-shirt instead of one of his more flamboyant outfits.
Posted by Bar Man at 12:32 PM 2 comments: