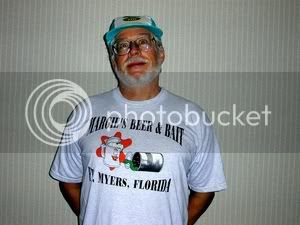 Bar Man is well known for his sartorial splendor. As might be expected by anyone who sets a certain stylistic standard, I get many questions such as "Wow, where can I get a cheesy looking shirt like that?" My "Margie's Beer & Bait" tee-shirt seems to attract a lot of attention. Believe it or not I have been told by people that they have had a drink there and might even have seen me. That would be interesting indeed. There is no such place.

This Is Not The Place

My sister, who is almost as demented as me, and I came up with the idea for this shirt one night while we were, I know this is going to be hard to believe, drinking. We were discussing the movie Fargo and the scene where Margie has to stop to pick up bait (nightcrawlers) for her husband so he can go ice-fishing. Well, one thing led to another and we thought a bar named Margie's where you could also buy bait would be a great idea. We also thought everyone who worked there, including the bouncers, should be named, or at least go by the name, Margie. We, unfortunately, could not actually afford to open the bar but we could afford to have a couple tee-shirts made. My sister did the design work so I can take no credit for that. My sister lives in Fort Myers so that is where we decided the bar should have been located. Anyway, that is the story behind the not even ephemeral Margie's Beer & Bait.
Posted by Bar Man at 6:59 AM

If y'll do decide to open Margies, let me know. I'll be there for the opening ;-)

this is the greatest website I have ever seen. you are truly an inspiration for barflies everywhere.

I haven't any right to criticise books, and I don't do it except when I hate them. I often want to criticise Jane Austen, but her books madden me so that I can't conceal my frenzy from the reader; and therefore I have to stop every time I begin. Everytime I read 'Pride and Prejudice' I want to dig her up and beat her over the skull with her own shin-bone.
- Letter to Joseph Twichell, 9/13/1898
Mark Twain

How did they resolve the issue? Did you have to call them or email them?
Payday Loans Cash Advance

Great bit of blogging! Hope you get a chance to look at my site bar stools