Three gentlemen from Chicago who read my blog came to New York to catch the Belmont Stakes. One of them sent me an email and we agreed to meet and hit a few bars when they got here. They are quite the traveler/drinkers themselves, having gone to bars all over the world. They too try to limit themselves to but one drink in a place so they can see as many as they can. The operative word there being try. Bar Man took them to three places in New York where they had not been before and we spent a most enjoyable evening sharing a few drinks and swapping stories. They had more of them (stories, not drinks) than I did. 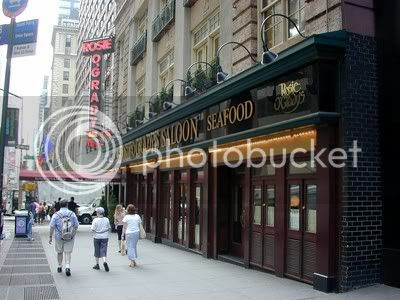 The people I was meeting from Chicago started out at the 21 Club so I picked a spot not far from there. Rosie O'Gradies is a really classy Irish pub at 800 7th Avenue on the corner of 52nd Street. Within a few minutes of meeting these guys we were all chatting like old friends. 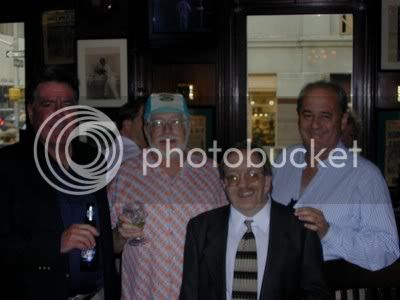 The bar is a rectangle that is open in the center. The end furthest from the door as well as part of the adjacent edge is devoted to servers and the storage of glasses. There is a brass rail. Above the bar is a similarly shaped set of wood and glass cabinets that hold all kinds of knick knacks, ranging from fancy crystal vases to a small copper still. There were also large models of cars and trucks and a good sized figure of a baseball player wearing the number 3. Lots of pictures of Yankees, Dodgers, and Giants players adorn most of the walls up front along with framed newpaper pages announcing significant wins, some from long ago. The back corner was covered with pictures of what looked to be golf outings.

The fancy dining area is separated from the bar by a partition topped with windows that had narrow lace curtains on the bottom. The windows on the 52nd side of the bar had similar windows and there were tables along that wall.

I had a couple of Tanqueray and Tonics. 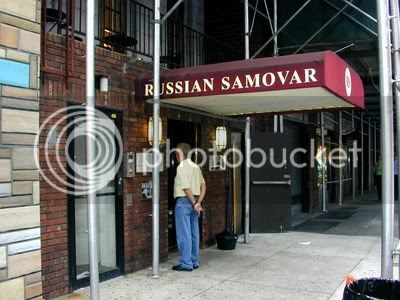 Just down the street a bit at 256 West 52nd Street is this interesting Russian bar and restaurant. Lots of bright red and tourquise lights hanging from the ceiling but the place still has a bit of a dark ambience to it. There is a piano up front so I imagine that at some point everyone breaks into song. There are a lot of strange looking concoctions behind the bar that wouldn't look out of place in laboratory. Just about any kind of vodka concoction you could imagine, horseradish, garlic, dill, as well as more traditional mixtures such as pineable. A very pleasant and attractive bartender administered to our needs, at least as far as drinking was concerned.

We still saw her even with her eyes closed. Oh boy did we still see her. 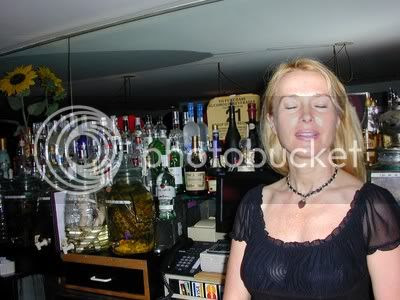 I had a bottle of Baltika 3, a flavorful Russian beer.

Just across the street at 265 West 52nd Street is another Russian bar. Now this place seemed to be a bit smaller and more of a bar than a restaurant. But maybe that was just because of the layout. Also, this place was really crowded so it was hard to get a good look around. They had a happy hour going on so that probably explained it. They had a piano too and before we toddled off the pianist sat down and began playing. This bar was set up similarly to the one at the Russian Samovar and also had a large variety of vodka mixtures available. 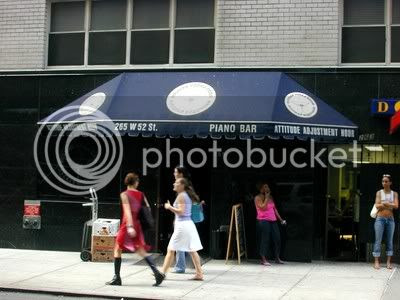 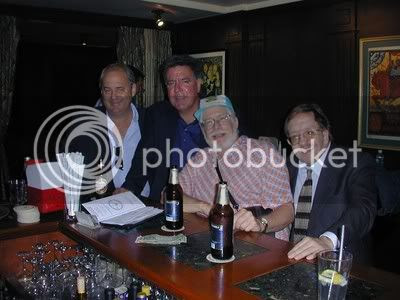 I had another Baltika 3. I know, I know, I should have had a shot of horseradish or garlic vodka in at least one of these Russian places, but I wimped out.

Wow made triple nickel,that is "Good Luck". Keep on track Bar Man.It`s along way to December 6.

I think that was so cool, people flying in from elsewhere and having a drink with you.

Hopefully if I am in NYC, will try to catch up.

Thank you for the informative blog
Here Is some additional
Classmates.com Resources. Find you old friends from way back when if you or your readers are interested.

As a special token of my appreciation for all your kind help and the wonderful business you have sent my way---I want to give you a free gift.
It is called the "$25000.00 Idea". It will help you in all your endeavors.
Click here: FREE GIFT

The fact is that the INTERNET is making people RICH! Shouldn't YOU be one of them? Click here: FIND OUT NOW!

Hi my friends! I'm writing to you because I just came across a business that I think has great potential. It lets you save money on almost everything. Make money from almost everything, Including home loans- plus... help lower your taxes--best of all--it requires absolutely no investment. I thought you might be interested and like to check it out...

Earn Extra Income Part-Time Anytime Anywhere. How Much Does Your Opinons Worth? Supplement Your Salary. Earn Extra Money Part-time.