A Boat Trip To Williamsburg

They have introduced a new ferry service that makes stops at a few places in Manhattan and, more importantly to me, sercice to Willamsburg.  This is great because it takes forever to get there by either bus or subway, at least from where I live.  As an example, the mysterious G train with service to Williamsburg is like a mythical beast.  You know it has been there because you can see its tracks, but that doesn't mean you will see the beast itself.  In other words, service sucks.  So the best way is to take a train into Manhattan and at 14th transfer to the L train back into Brooklyn, and one stop later you are there.

But, the ferry, which is free untlil the 24th, gets you there really quickly and very comfortably.  There are stops at South 6th Street and North 6th Street in Williamsburg.  The Mysterius Chinese Woman and I picked the ferry up down by the Brooklyn Bridge, right next to the River Cafe, and got off at South 6th Street.

The Pier By The Brooklyn Bridge 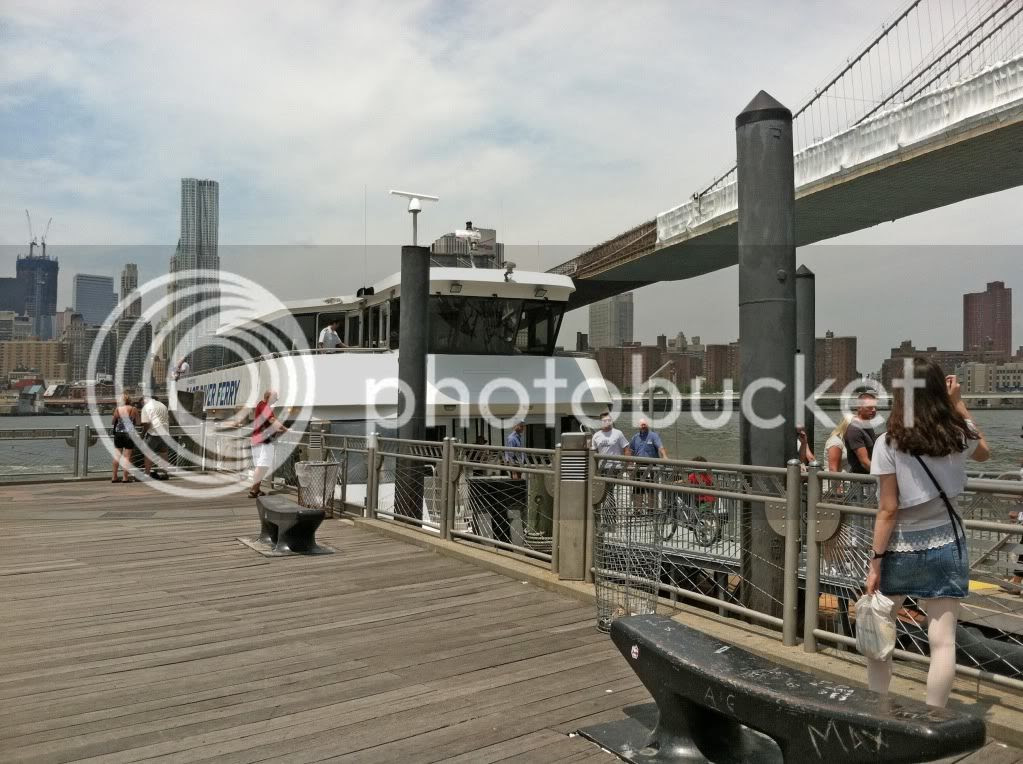 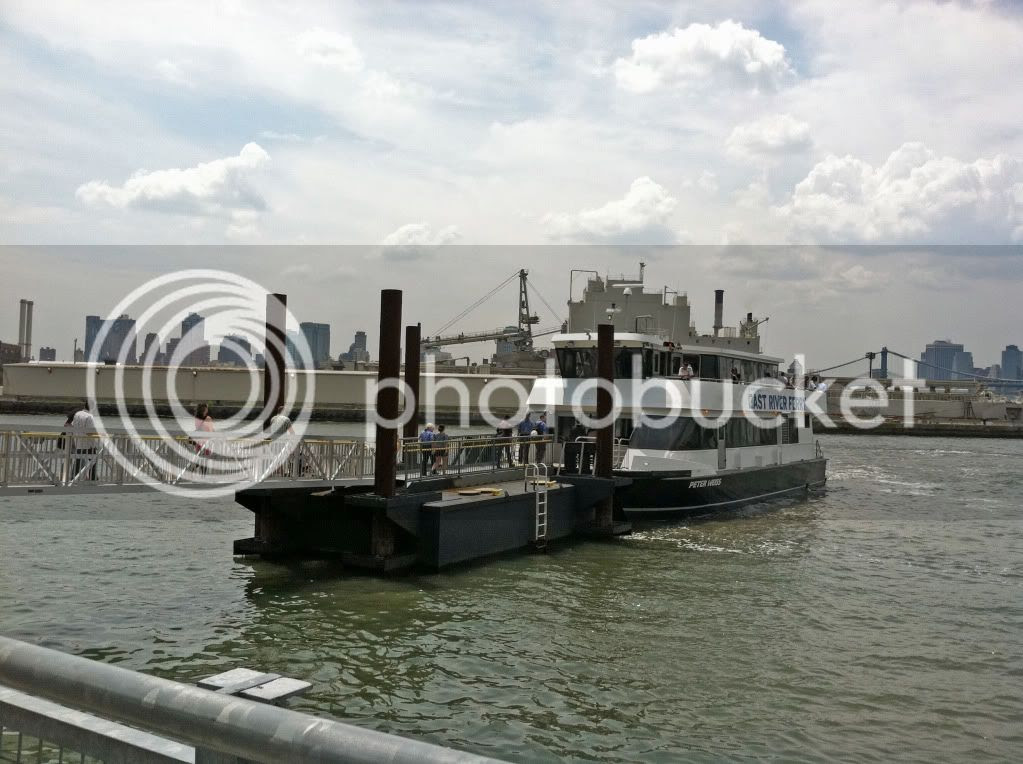 It is just a quick jump over to Williamsburg where we disembarked. Now a lot of Williamsburg has gone upscale in the past few years. It is now the home base of our "hipster" community. Not sure what exactly that means, but there must be money involved because prices skyrocketed and a building boom started. Then, with the economic downturn a lot of the development just kind of stopped midstream.

And The Edges Are Still A Bit Rough 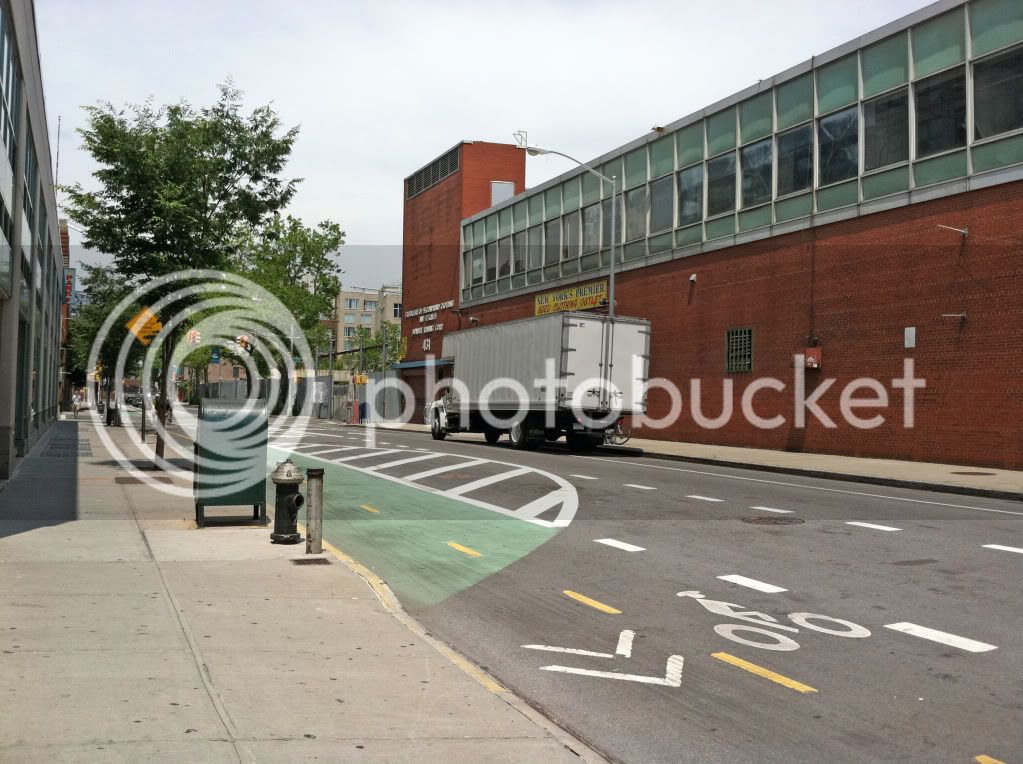 I guess by rough I mean kind of light industrial and older buildings. And you can't get much lighter than this: 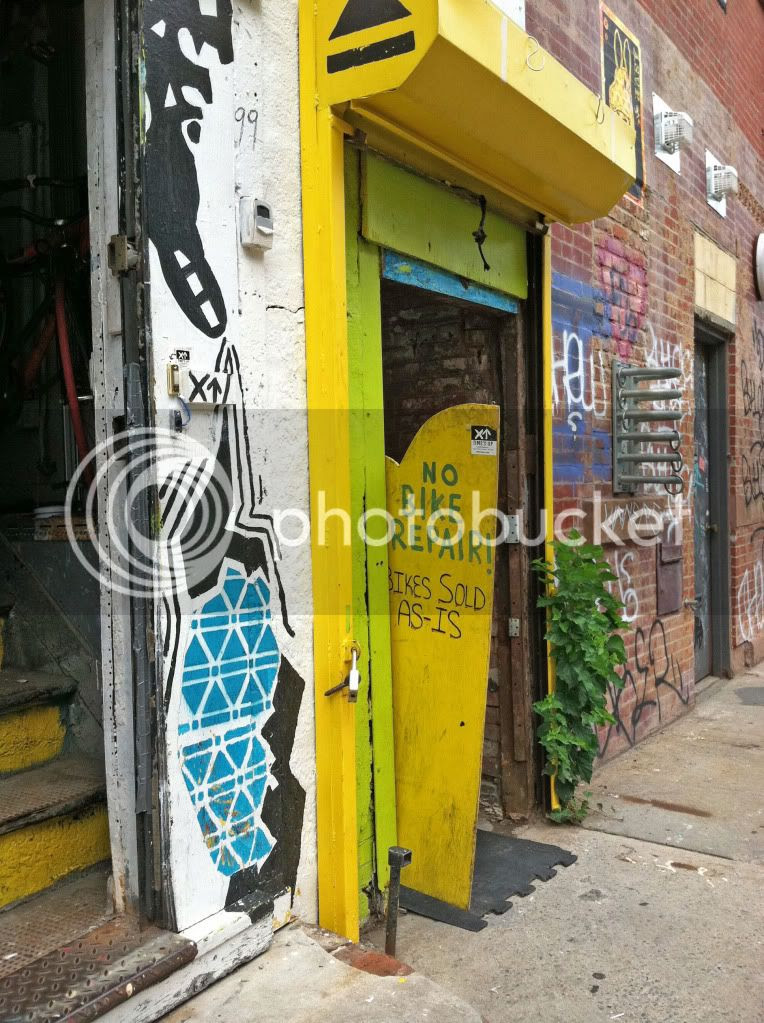 And something I had never seen, a vending maching that seemed to dispense various small hardware stuff. Maybe it was stuff to repair your bike.

It Was Broken, Though 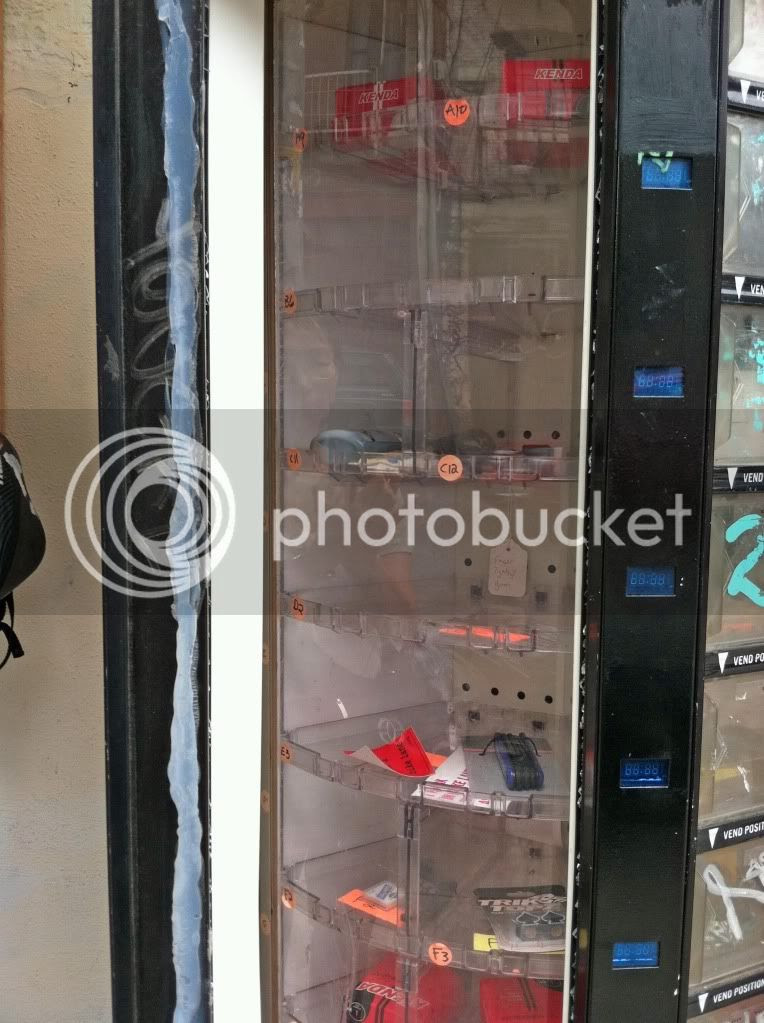 And in one of these older buildings is a small restaurant and bar that has received a bit of attention lately for it's eclectic menu. 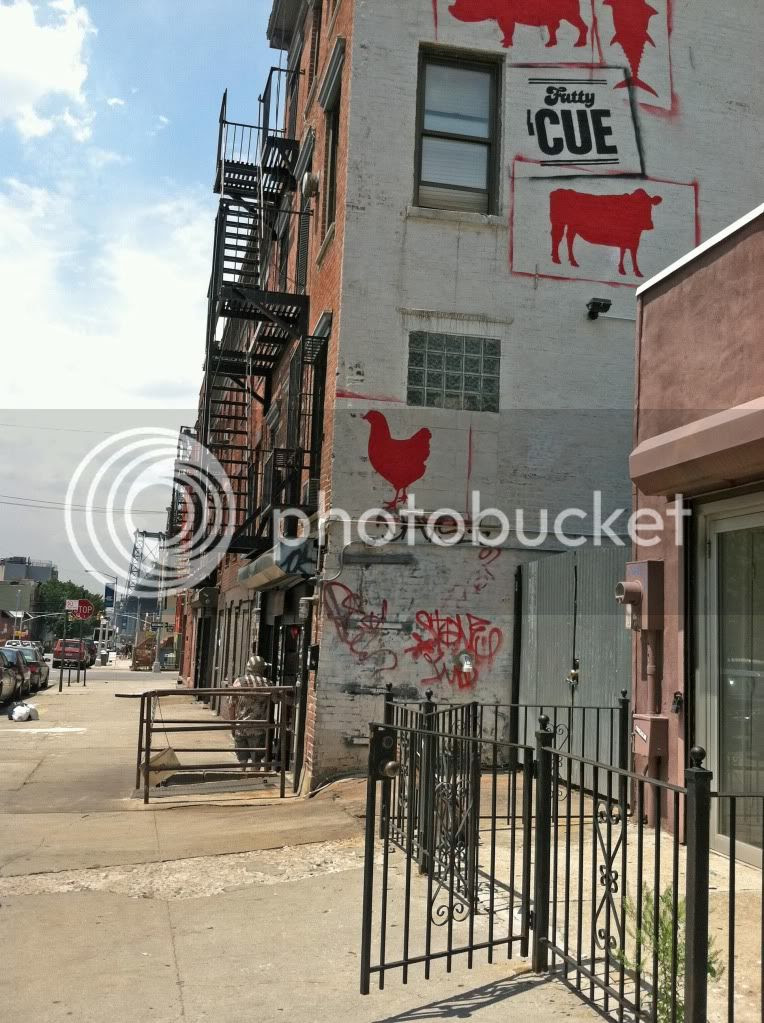 This is just a small hole-in-the-wall with a small bar and just a handful of tables. They did have a small selection of decent beers. I had a Belgium beer, the name of which I forgot, and a bottle of Innis & Gunn Oak Aged Beer, most excellent.

Bar Man And His Beer 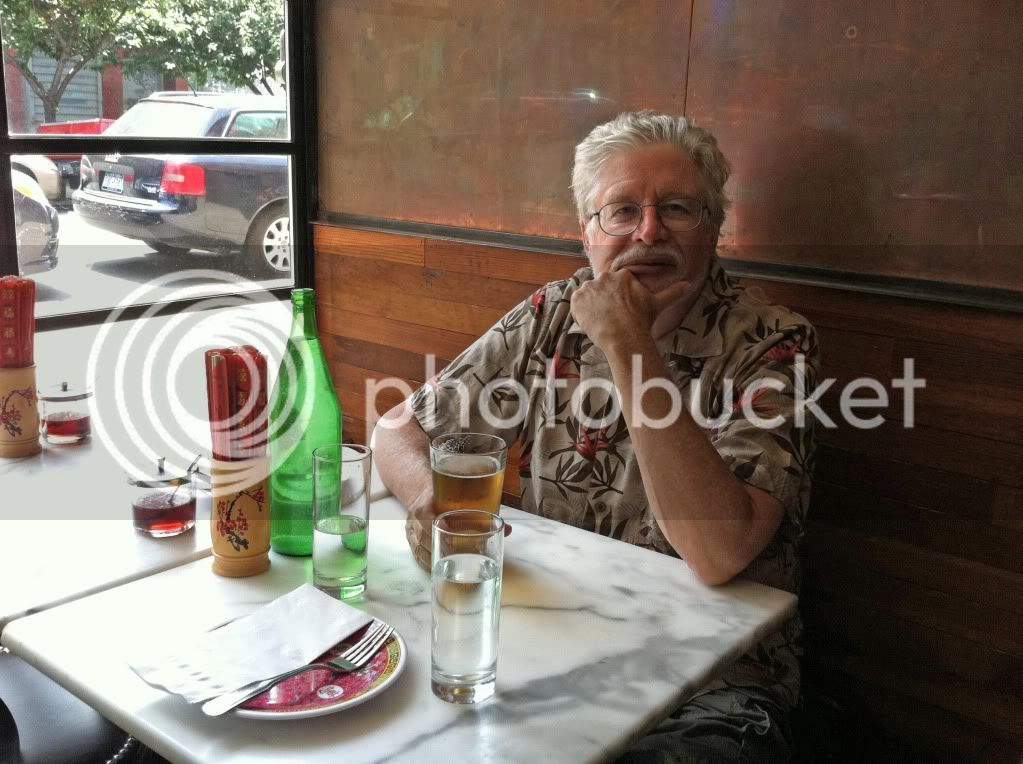 I was pulling a bit of a pout because when I tried to use my camera I found out that the battery was dead. Worse, this morning I moved the camera to a slightly smaller case (still had a little pocket for an extra battery, though) and left the charged spare battery in the other one. The case that was at home.

The Mysterious Chinese Woman was taking pictures with her new iPhone (she is now a Pocket Frogs addict) but I didn't think they would turn out that good. They did though. 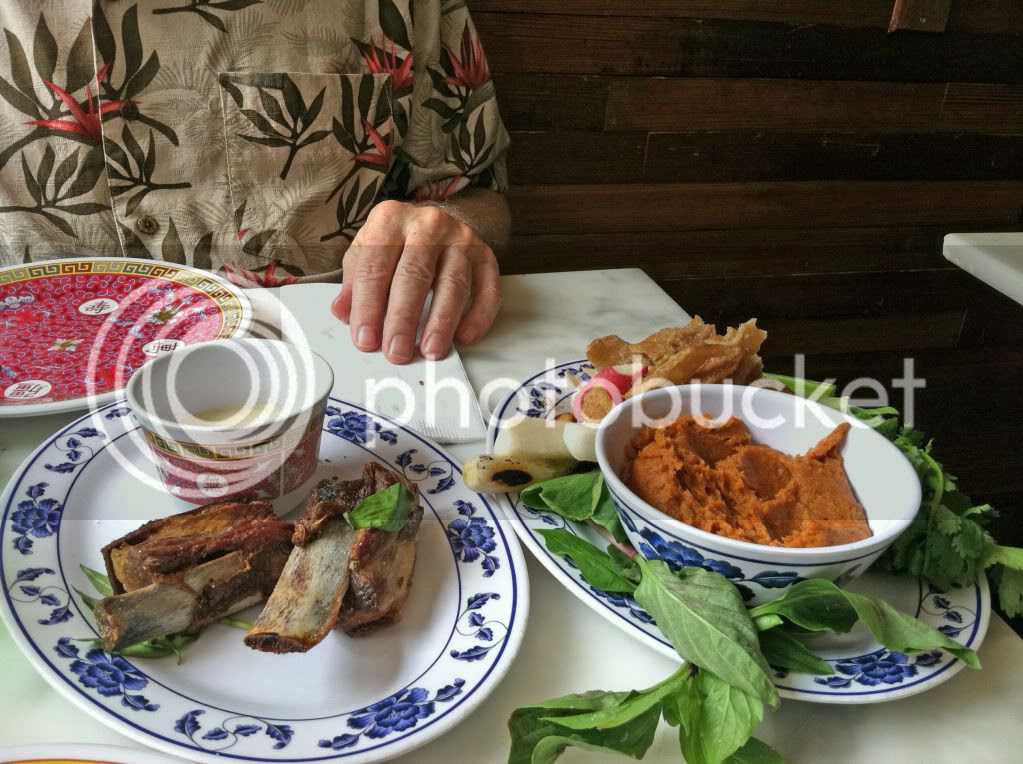 We split a couple of small dishes. The lamb ribs and smoked catfish. The small rib pieces were really good. The Mysterious Chinese Woman thought there was too much fat, but we were in Fatty Cue's, so what did she expect. The ribs came with a strange white sauce that to me had a bit of a fish taste. The Mysterious Chinese Woman thought it went well with the ribs but I didn't care for it. Instead I used kind of a sweet Jamaican pepper sauce that they had on the table.

The smoked catfish was a surprise. It was made into something like a whitefish salad that I get at our neighborhood bagel shop. But it was red, not white, and a bit drier. Oh, and nice and smokey. It was served with a plate of dippables which included fried pork fat (my favorite), radishes (red and white) steamed ginger, green onions, roasted garlic and who knows what else. It was quite tasty. Especially with the fried pork fat.

The two plates came with two cocktails for ten bucks. I was already drinking beer so the Mysterious Chinese Woman opted for a watermelon mimosa. When she finished it the host asked if she wanted another. When she said no he told her it would only be $2 more because they were normally $8 each. The Mysterious Chinese Woman has never seen a bargain she didn't like, no matter how much it costs. But in this case it was a good deal.

Then, for no reason other than we were such good customers, although we didn't spend a lot, he gave us a couple of free deserts.

What A Thoughtful Gesture 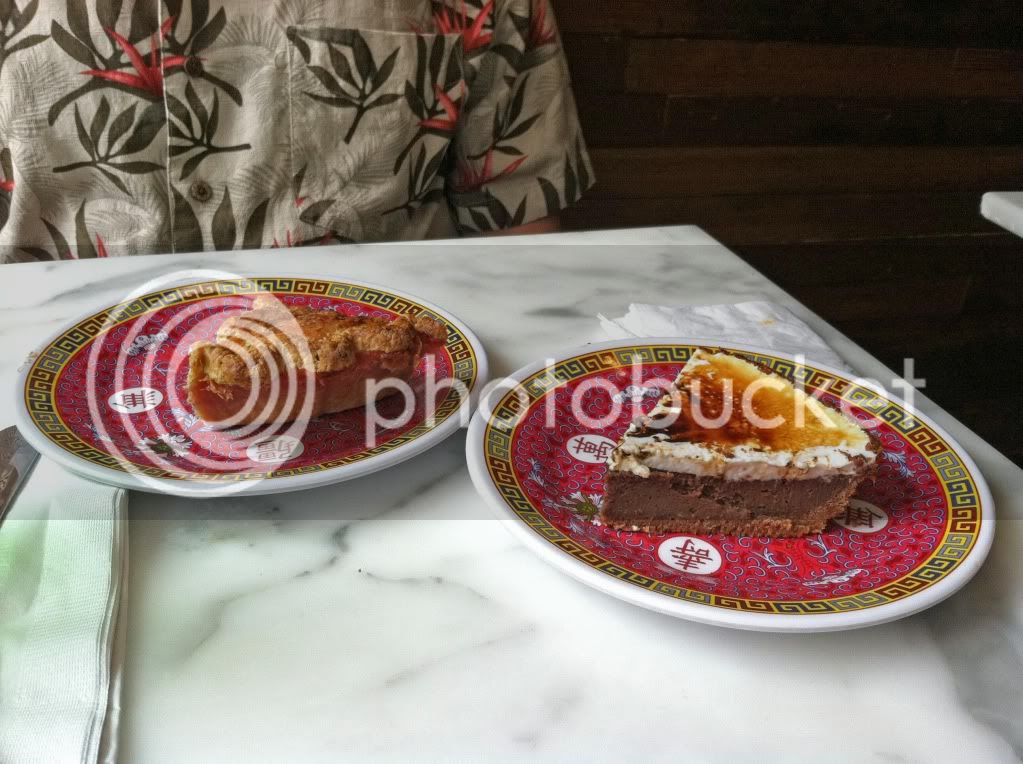 We got a piece of rhubarb pie that was definitely homemade and a to-die-for pie they called a smore pie. I guess that way you can always say "I want s'more pie." It was somply decadent and did taste vaguely of smores. Minus that black burnt sugar crust taste that was so vital.

And, after the mighty fine meal, drink, and socializing, we headed out to continue our wandering.

Tomorrow we will be going out to Coney Island for the annual Mermaid Parade. I will try to post about the rest of our trip to Williamsburg before we head out. If not, Sunday for sure.  Then plenty of mermaid picture.  Both batteries are fully charged and one is even in the camera.
Posted by Bar Man at 1:42 PM 5 comments: