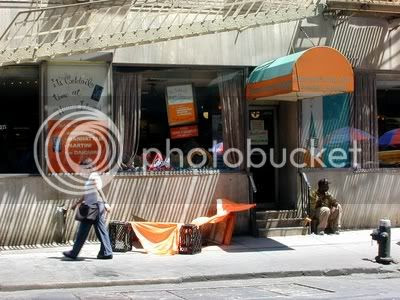 This place, on the corner of 46th and Broadway, really is like stepping back into the 1950’s. A simulated wood-grained Formica topped bar with brass rails top and bottom. Light wood captain’s chairs with maroon vinyl seats surround this two sided bar. The back wall is a gold patterned mirror and the section at the end of the bar has plastic shelves holding the liquor supply and showcasing their selection of bottled beers (no draft beers available). There was a battered blender sitting on the metal beer cooler behind the bar but given that there really wasn’t a bartender on duty I passed on the Pink Squirrel. And it was way to early for a decanter of Manhattans. I am not too sure when the appropriate time for one of those might be, actually. 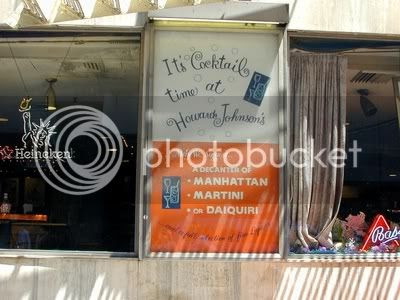 A narrow shelf between two orange and white “COCKTAILS” signs holds Bacardi Rum bottles filled with beans of the appropriate colors; white for the vanilla and coco rum, orange for the orange rum, and yellow for the limon rum. 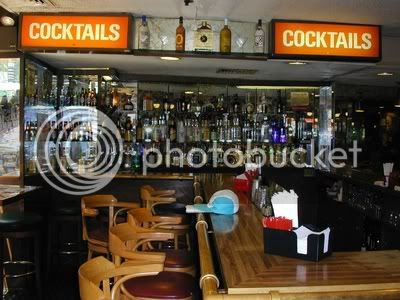 The rest of the décor is pretty standard Howard Johnson’s with a few framed posters for Broadway productions giving a nod to its proximity to the theater district. A brass coat-tree and orange cushioned booths complete the Howard Johnson experience. Large windows give an excellent view of the crowded streets and sidewalks. Sixties rock and roll completed the experience. The waitress that served me my beer put out a bowl of pretzels just for me.

I had a Sam Adam’s Boston Lager. 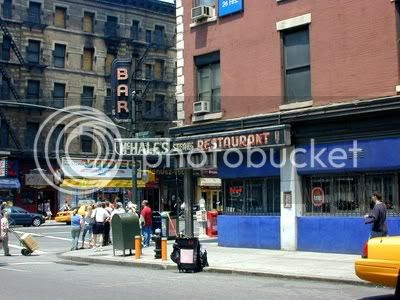 Just down the block at 46th and 8th Avenue is this not to be missed classic Irish pub. This place obviously has nothing to do with Kevin McHale because it is filled with autographed pictures of, mostly long retired, hockey players. There were a few pictures of Yankees players as well as pictures of a couple of race horses owned by one James McHale; Alwaysgoodthanx and Lill Orphan Groovy.

There is a nicely beat-up wooden bar with a brass rail. Black bar chairs with black vinyl seats and backs. An old looking back to the bar has three large mirrors. Kind of orange Lucite lights between the mirrors. Two orange globe lights that look like they were picked up by the claws in those arcade machines where you try to capture a prize hang behind the bar. A single tube shaped orange light hangs over the bar. Four slow turning fans with orange globe lights underneath hang from the ceiling. There are a couple of old living room like lights sitting on the shelf behind the bar that also holds several wedding cake like arrangements of liquor. 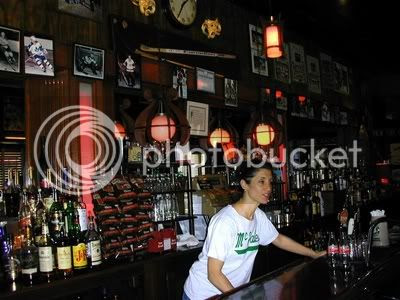 There is a small back room for dining. The hamburger with bacon that the guy next to me ordered looked, and smelled, great. Venetian blinds on the windows and the booths along the wall gave this a bit of a diner-like appearance.

I had a draft Grolsch. 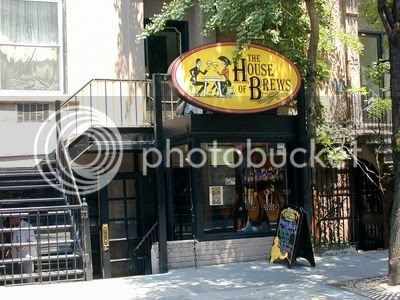 Heading across the street and continuing down 46th towards 9th you come to The House Of Brews at 363 West 46th Street. It is a not overly pretentious place that has a very nice selection of beers and an impressive array of single malt Scotches. This is a narrow space with a long wooden bar and a wooden foot rest. Somewhat fancy wooden bar chairs with red vinyl seats adorned with brass headed tacks. The twenty beer spigots are mounted behind the bar on the fronts of four faux beer kegs. A couple of large screen televisions largely obscure the mirrors behind the bar. One of those large beer tube things with a spigot on the bottom was sitting on one end of the shelf behind the bar. Various colored lights with translucent plastic looking cube shaped shades hung over the bar. A narrow ledge above the bar displays the forty or so bottled beers they carry. 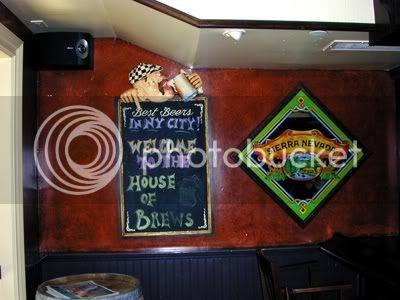 High round tables surrounded by high stools line the wall behind the bar chairs. The walls are paneled about halfway up and kind of a brown marbled paint above. The walls are decorated with framed brewery advertisements. There is a small area in back with booth-like seating for dining. There are also a couple of round tabletops set on top of wooden beer kegs. The floor is old looking wood. A large window in front looks out at the bar across the street that is calling out to Bar Man. Another day, another day.

I had a draft Holy Grail Ale from the Black Sheep Brewery in England. Quite flavorful and full of hops.

Very impressive. If only I had a quest my life would be complete.

Time machine in the middle of Manhattan - soon to closing as well. Another great stop in your pursuit of nirvana.

Your nose knows... McHale's has one of the best burgers in the city.

Trouble yourself no longer, I will sell you a cream that will remove your dark circles and help provide me wealth! Act now! Act now!Never needs winding... Tom Waits...

I was doing research on bar room supply and came across your site 1000 Bars. The title HoJo A GoGo attracked me. This is good reading, I'll pass it on to my girlfriend. She likes this kind of stuff. If you or any of your readers can help or offer information on bar room supply let me know. Glad I ran into your inspiration. I like to read blogs for creative ideas and themes. I get a lot of good ideas for acting. Thanks again for your time. Keep it up.

I was doing research on bar supplies and came across your site 1000 Bars. The title HoJo A GoGo attracked me. This is good reading, I'll pass it on to my girlfriend. She likes this kind of stuff. If you or any of your readers can help or offer information on bar supplies let me know. Glad I ran into your inspiration. I like to read blogs for creative ideas and themes. I get a lot of good ideas for acting. Thanks again for your time. Keep it up.