And Now - The Answers

Well, for those who think that the United States single-handedly won World War II, it might surprise you to know that the Potsdam Conference, held at Cecilienhof, the home of Crown Prince Wilhelm Hohenzollern, in Potsdam from  July 17th to August 2nd 1945 was officially hosted by the Soviet Union. Hence the red star planted in the garden.

To Honor The Host 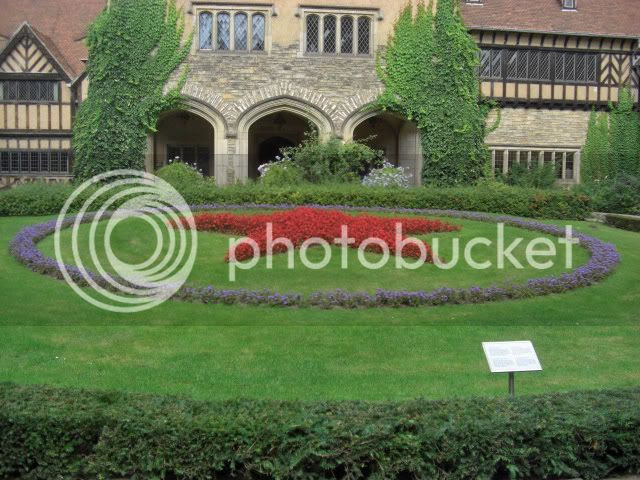 Now, who was there? Well, Joseph Stalin, the Communist Party General Secretary was there. President Franklin D. Roosevelt, however, had died and it was President Harry S. Truman who represented the United States. And, although Winston Churchill was present, he lost the 1945 general election in the United Kingdom, much to his surprise and disgust. So it was the newly elected Prime Minister Clement Attlee who represented the United Kingdom. Churchill, bitter after his defeat, pretty much refused to participate at all.

See kids, you can tell your parents you read this blog because of its educational value.

Have to run now, Bloody Marys being served in the lounge,  Just to warm us up for our lunch, complete with wine, and a beer tasting later this afternoon.  Got to love cruising with Viking.  I think the axe throwing and deflowering of maidens is later tonight.
Posted by Bar Man at 3:03 AM 2 comments:

Today we are docked at Bad Schandau, and it isn't bad at all.  Just a little town on the Elbe, but quite cute.  Most of the people on the boat took buses and went to see rock formations but I stayed behind to explore the town.  That took about ten minutes.  I did buy a coffee and a nice crispy pastry though.  Just what I needed after a breakfast of blueberry pancakes, a mid-morning snack of sausages and beer, and lunch.  I just had ice cream and a bit of bubbly for lunch though.  I am cutting down.

But more of that later. I wanted to give you an idea of what our breakfasts were like at the Berlin Hilton.  As I had mentioned it was kind of like a little champagne brunch in Las Vegas.

The Lines Aren't As Long 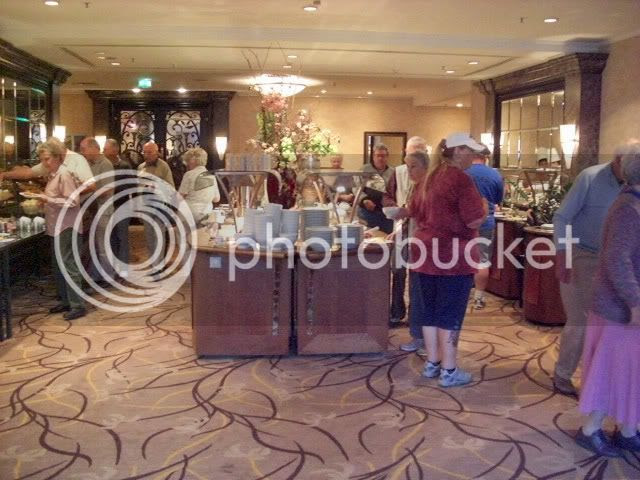 There was a station where you could get your eggs prepared anyway you wanted them, including omelletes or omelettes or omelets (how do you spell it, anyway?).

One Egg Thingy With Everything, Please 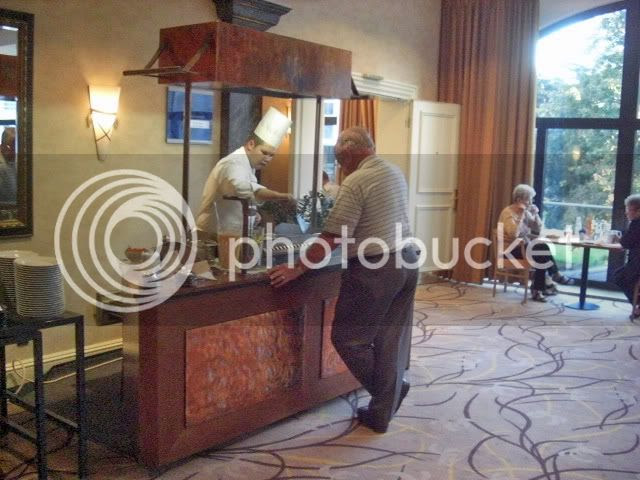 I love smoked salmon and they had two kinds every day, with horseradish.  That and some cheese and dried sausages, a bit of bubbly, the perfect start to the day. 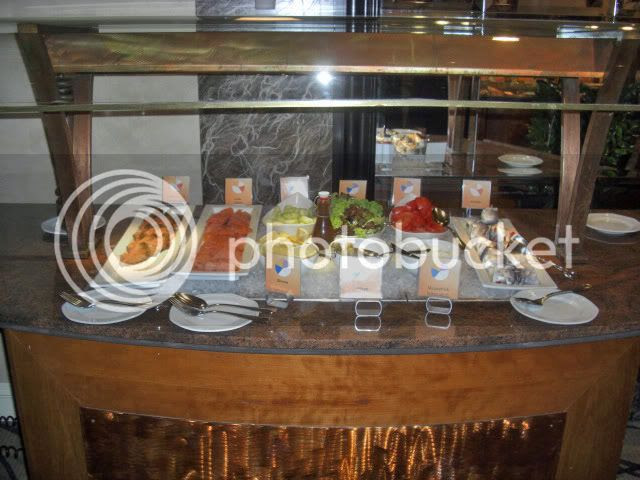 Just Another View Of Brunch And, as you can see, the Mysterious Chinese Woman was pleased with her breakfast selections. 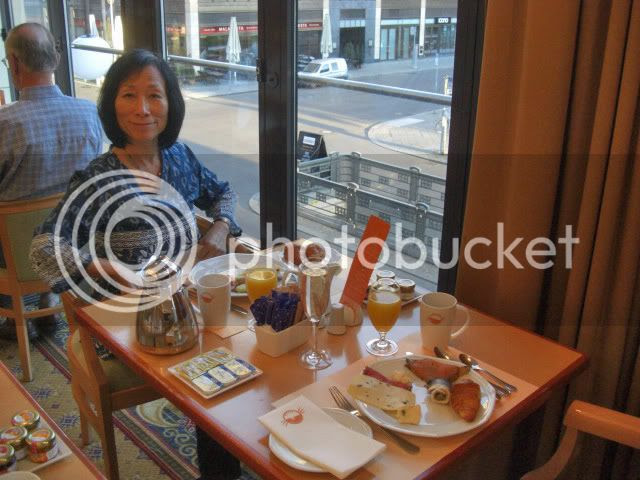 After breakfast we boarded our bus and headed to Potsdam for a little tour before boarding our boat.  Most of you, I am sure, have heard about Potsdam and the significance it played after the end of World War II.  But here is a question for you.  Why do you think this garden was planted with a red star in the middle?

And who do you think represented the United States, Britain, and Russia?  If you answered Roosevelt, Churchill and Stalin you are wrong.

The boat is pulling out of Bad Schandau now so I am about to lose my internet connection.  Be sure to check back tomorrow for the answers to the above questions (or you can use Google if you can't wait).  Our next stop will be in the Czech Republic.  Although they are in the European Union they do not use the Euro, but rather the Czech crown.  For a lot of extra credit, do you know why?

All shall be revealed tomorrow.
Posted by Bar Man at 10:16 AM 1 comment:

Back At The Zoo

Actually, still at the zoo.  A bit of a better connection here as we are docked in Dresden so I managed to upload a few more pictures.  And I didn't want you to tear your hair out wondering who made the poo poo. 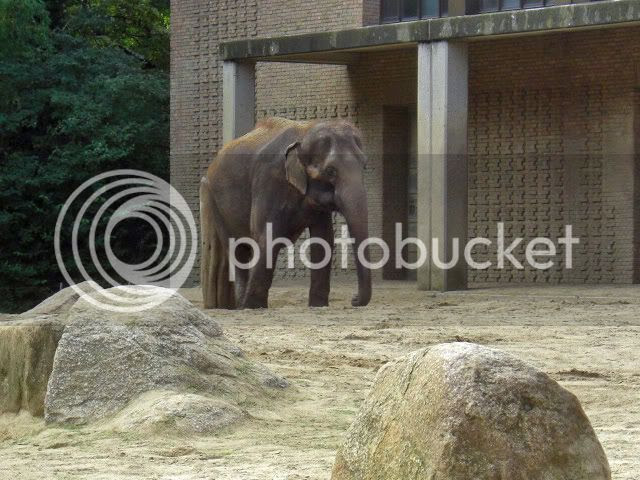 This is supposed to be one of the largest zoos in all of Europe with one of the largest collections of animals.  It isn't one of those huge zoos like the Bronx Zoo, but that is because they don't really have the animals in natural habitats.  Kind of a few steps up from the old animal-in-a-cage zoos like we used to have.

One of my favorites here was the fearsome pigeons.

Not Their Natural Habitat 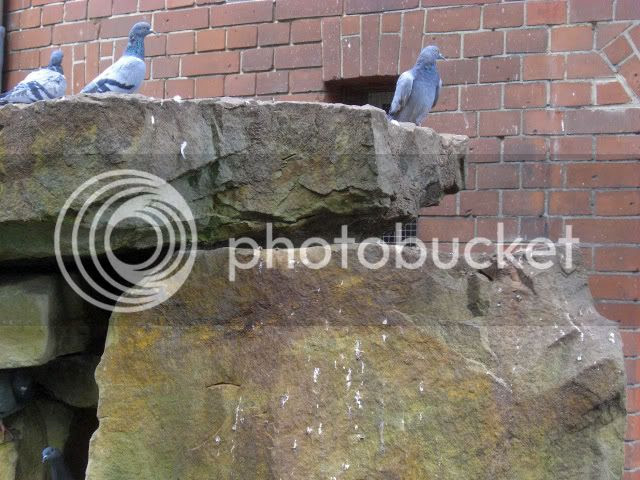 I don't want to bore you with a bunch of pictures of animals.  I am sure you have all seen a giraffe before, and there weren't any really exotic species here.  But on the other hand, how could you not love this guy?

So Cute And Cuddly 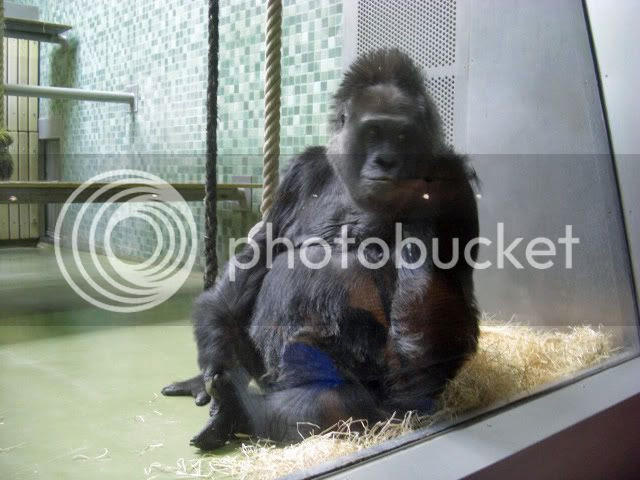 We were in a bit of luck because it was a nice sunny afternoon and there was a little bandstand right in front of the bier garten in the zoo.  And isn't that civilized, a beer garden in the zoo. 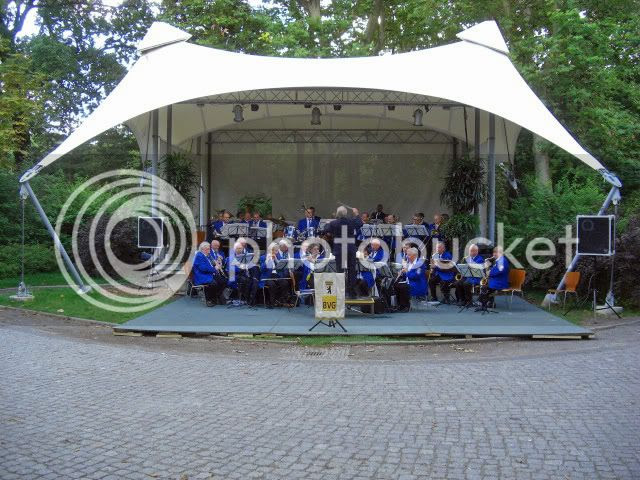 No oompah music though, but plenty of Abba.  And I don't care what anyone says, I like Abba.  Especially Dancing Queen.  And, of course, the beer makes it all go down better.

What A Lovely Sight 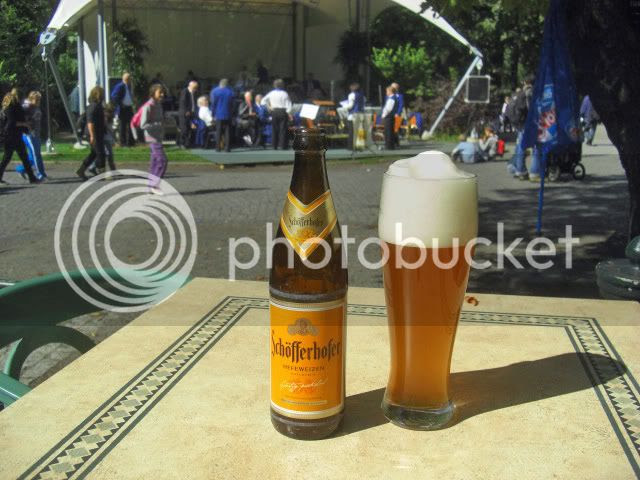 Bar Man And A Beer, Even A Lovlier Sight 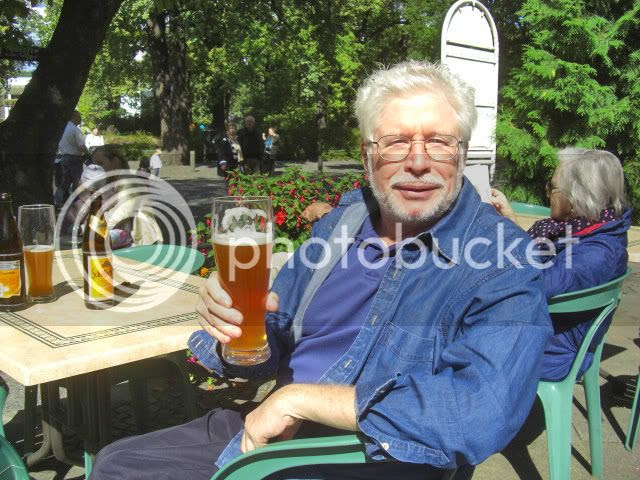 And The Lovliest Sight Of All 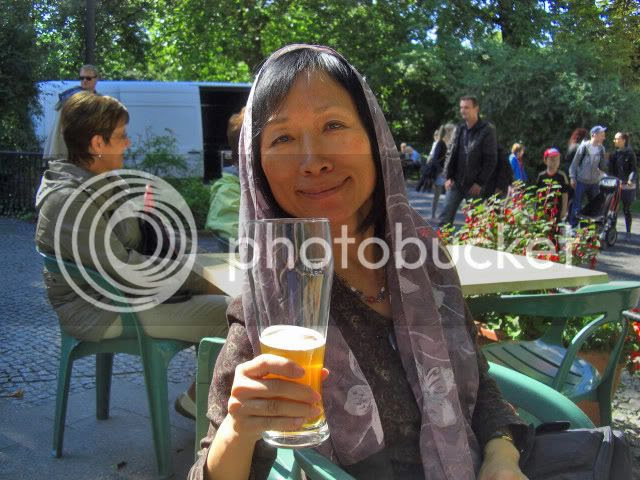 We were thinking of getting a little bite to eat here, but somehow after I saw the kitchen I decided against it.

Just Saw Me Off Something 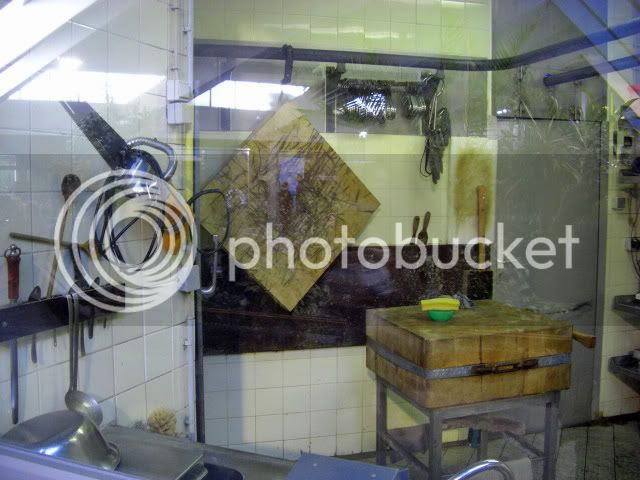 We took the subway to the zoo so, of course, I have to include a picture to show you how clean it is.  Not as new or as fancy as the one in Lisbon though.  And here you bought your ticket out of a machine and validated it before you got on the train.  No turnstiles or gates or anything, but I would guess the penalty for not having a validated ticket must be quite severe.  I didn't see anyone trying to beat the fare, which was 2.1 Euros or about $2.60 per trip. 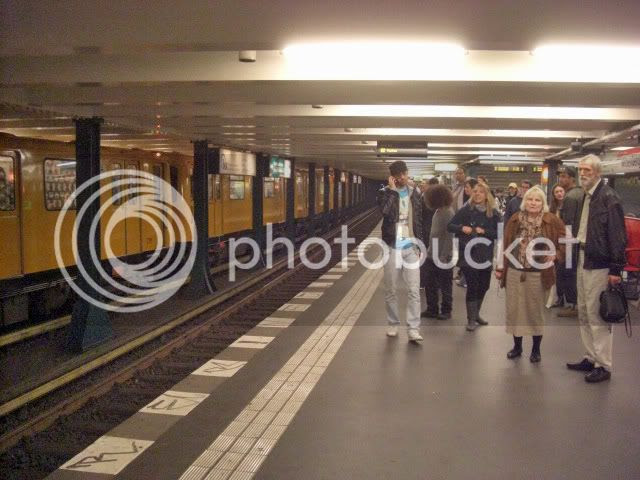 And that is it for now.  We are about to get our daily briefing on our next day's itinerary (I don't even remember where we stop next).  We stay docked here in Dresden overnight and we are very close to the center of town.  If I am feeling ambitious I might toddle into town to find someplace for a beer or two.  But I bought the Silver Service package for 50 Euros and that entitles me to free beer and wine and an open bar all day long.  Plus you get to select your wines from a more extended offering than those going steerage.

Right now I am sitting in the boat's lounge drinking an original Czech Budweiser and listening to the musical stylings of Vladimir on the piano while watching the Elbe flow by.  We are docked, but the Elbe and the beer are flowing.
Posted by Bar Man at 11:34 AM 2 comments:

The Bears Of Berlin

A few people asked me about the bears in the pictures I took while I was in Berlin.  When Germany hosted the World Cup in 2006 they sent out these plastic bears to representatives of the participating countries.  Each country then painted the bears as they saw fit and then sent them back to Berlin where they are placed around the city.  The bears can either stand on their hind feet or on can stand on their heads.

The internet connection is a bit faster today so I may try to upload some pictures later.  Today there is a tour of a porcelain factory here in Meissen, but I am going to pass on that.  Our boat is docked near enough to the center of town that I can just walk there and browse around on my own.

The China that is made here is very, very expensive.  A single cup, for example, costs over $100.  On the other hand, they keep the molds of every piece of China they have ever made.  This means that even if you broke a plate that was over 100 years old you could order a replacement.  Needless to say, this would not be cheap.

Before this factory was built in 1708, the first in Europe, all porcelain came from, you guessed it, China.  This factory was considered to be a lower cost alternative because, as you can imagine, the shipping costs back then were quite high.  And, of course, it was only royalty or the extremely rich who could afford it.  At the current prices that is probably still true.

Okay, I did manage to upload one picture as an experiment and it wasn't that bad.  Perhaps I will have more for you later.  In the meantime, you can try to guess what animal in the Berlin Zoo left this little package.  As a hint, for those of you who remember the old television program Candid Camera... 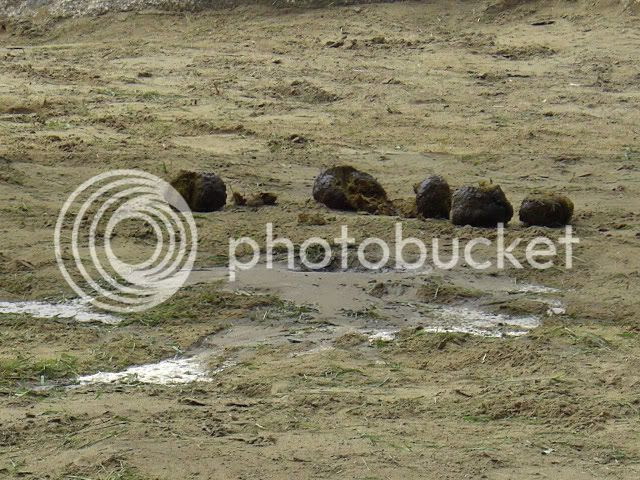 Tonight we sail into Dresden, dock overnight and then tour the city tomorrow.
Posted by Bar Man at 7:26 AM No comments:

I do have an internet connection on das boot, but it is agonizingly, teeth-grindingly slow.  The very idea of uploading a picture is unthinkable.  It looks like I will have to wait until I get to Prague to post anything of significance.

On the bright side, I paid 50 Euros for the all you can drink package on the ship.  Unlimited beer and an open bar.  Good stuff too.  Last night I closed the bar up drinking rusty nails, and they used Famous Grouse scotch, not a shabby brand.  Plus this package lets you select quality wines with your meal so you don't have to drink the cheap stuff like the people in steerage.

So far the cruise has been great.  Sorry the connection is so slow but eventually I will post more with pictures.  Until then, however, you will probably only get short narratives about my journey.

Why is it that they always say that the winner of the match at the U.S. Open had to overcome the wind?  Didn't the loser have to contend with the same conditions?

Free (kind of) beer awaits me so I shall bid you all Uff Wider Stein and may all of your internet connections be faster than mine.
Posted by Bar Man at 8:07 AM No comments: