As I mentioned in my last post, Downtown Bar & Grill is conveniently located between American Beer and home. 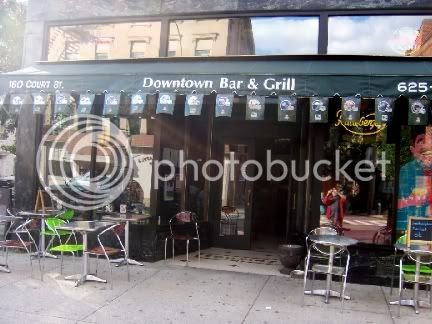 We were thinking of just passing by, but then I saw this guy waving us in and, what can I do. Temptation is not something I pass by. 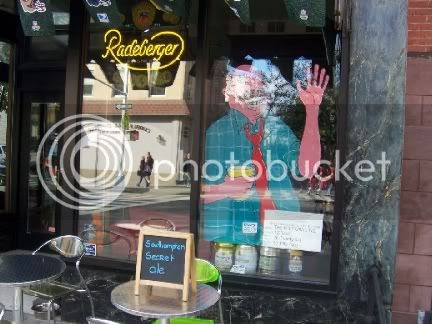 Imagine our surprise when we found out it was just a plywood figure and not a real person. Bruce said now he knows how ducks must feel when they fall for that old decoys in a pond trick. I said the similarity was more than he knew, because much like the ducks, we too were going to get blasted.

My buddy Matt was all to ready oblige by pouring us one of his special beers. 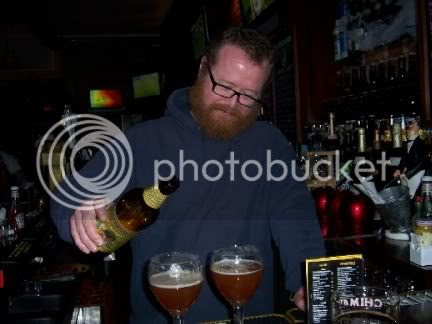 We started out with a Samuel Adams Imperial Pilsner 2005 Harvest. This was brewed only once but Matt does cellar beers so this was a nice treat. 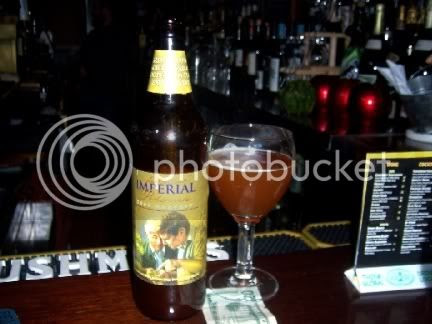 It is quite hoppy, and that is a bit of an understatement. It has so much first harvest noble hops, Hallertau Mittelfrueh from Germany, that the beer is actually a bit murky from hop particles in suspension. It is a nice 8.8% alcohol but there is so much flavor you don't really notice it at first. You smell the spiciness of the hops, and that is the predominant flavor. There is also a nice malt back though. The hazy orange color with a nice white head made for a pretty drink as well.

After polishing off the bottle we switched to something just because we liked the name. 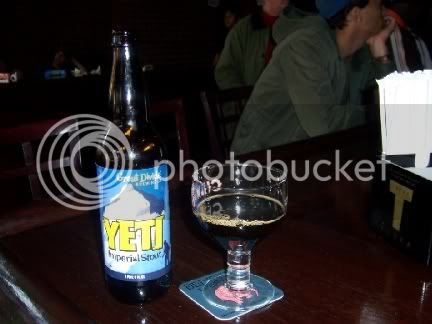 This one kicked up the alcohol factor a bit, coming in at a hefty 9.5% and tasting it too. It has a lot of chew to it and you get plenty of flavor, chocolate, coffee, toffee and caramel in layers. All that and hoppy as well, particulary at the end. There is a reason this beer has won all sorts of awards over the years.

As you can see, both Bruce and I enjoyed it. 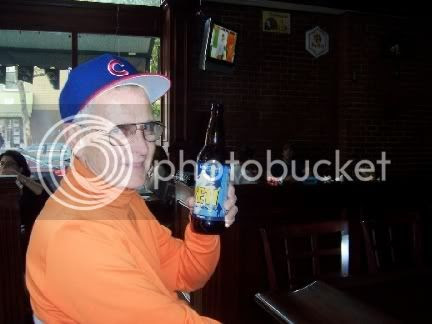 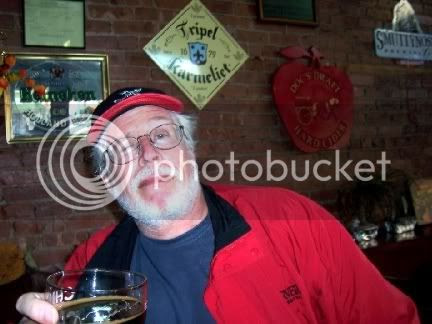 All good things must come to an end though, sort of. Obviously we were having too good a time. Now I usually don't carry my cell-phone and didn't have one with me on this trip. Nonetheless, the Mysterious Chinese Woman and her sidekick Donna (Bruce's wife) managed to track us down and I don't think they were too happy to see how much fun we were having. 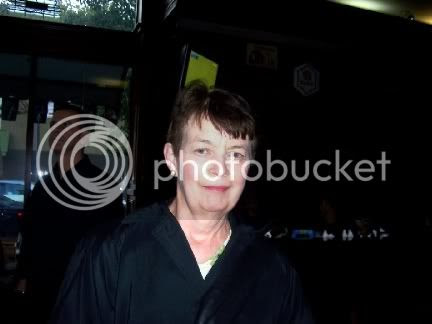 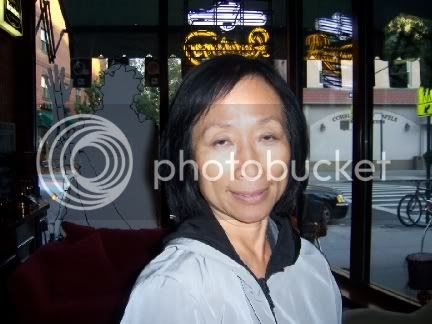 Even though we got hauled off home we still had our purchase from American Beer. We decided to open just one small bottle and, choosing carefully, we selected - 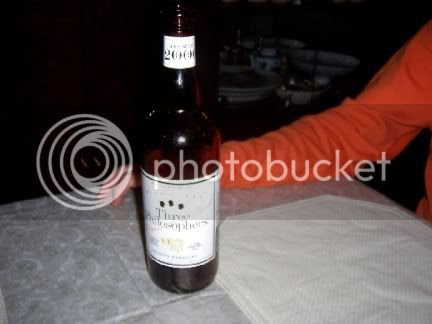 Three Philosophers is brewed by Ommegang, a brewery that specializes in Belgian stlye ales. Nothing unusual about that, except it is located in Cooperstown, New York. Be that as it may, they turn out an incredible line, nary a clinker in the bunch.

Three Philosophers is a Belgian stlye Quadrupel ale and is blended with a small amount of Kriek from Belgium. Kriek is a spontaneously fermented cherry beer. It does give Three Philosophers a bit of a ripe cherry flavor which nicely complements the chocolate taste. Nice for sipping after dinner or, quaffing like we did.

Bruce and Bar Man About To Quaff 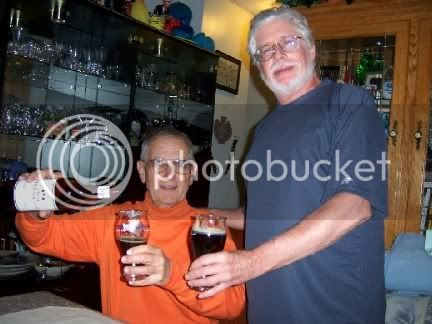 This beer was the strongest of the lot so far today, a heady 9.8%. Again, with all the flavor you didn't really taste the alcohol, but you definitely knew it was in there. This beer could easily replace a port after dinner and, in my opinion, would go with a cheese plate even better than a port. If you can get your hands on it, by all means try it.

Oh yes, the educational part of the blog. Three Philosophers name comes from a 1784 satire written by British poet William Blake. The satire was titled An Island In The Moon and had three philosophers as the main characters. I can only guess that whoever named this was an English major who could only get a job in a brewery (not unlikely) and sampled a lot of the brew before coming up with the name. That is my story and I am sticking to it.

The Mysterious Chinese Woman told me the next day that Bruce and I did, indeed, eat a lot of cheese while we were drinking the beer. But I don't remember.
Posted by Bar Man at 10:41 AM 1 comment:

As American As Beer

Well, in my opinion, there is nothing more American than beer, and no better place to get your beer than American Beer. This, of course, is if you are getting your beer to go. 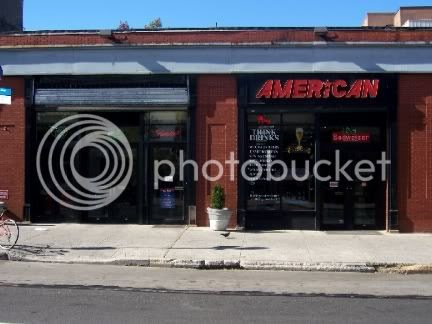 Luckily, American Beer is within walking distance of where I live so shopping there is a breeze. I also believe that walking home with my beer is fairly good exercise. The Mysterious Chinese Woman and I disagree somewhat on that last point. She thinks I should be putting the money I spend on beer towards a membership in a health club. Alas, it is an argument she will never win.

Ever ready to help you with you beer selections are Sabrina and Jennifer.

Sabrina and Jennifer Ready To Help 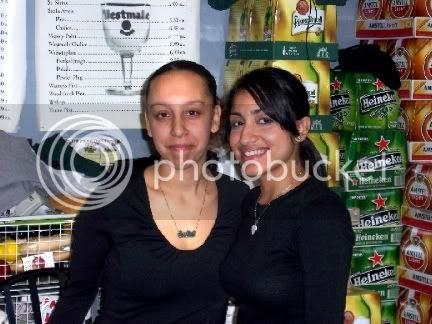 And backing them up is Cindy, who looks to be in charge of inventory control, and just about everything else. 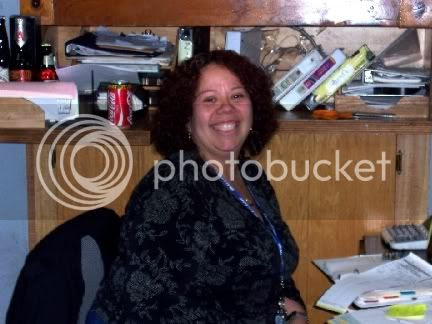 And lets not forget Louie, the muscle of the operation. 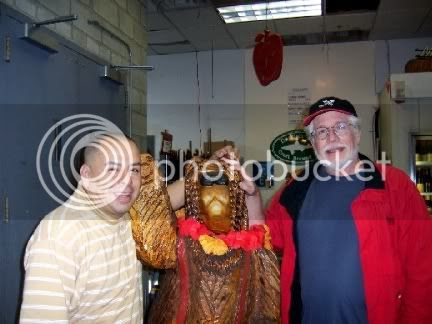 American Beer does have a truly great selection of beers, you can get lost in the bottles. I will often come here to buy a single bottle of beer that I could have gotten at the neighborhood deli just to look around. It truly is a beer drinkers paradise. Just today I bought a six-pack to take to the Jets game on Sunday. But my six-pack has two bottles of Silly Scotch, a Scottish style ale brewed by Brasserie De Silly Brouwerij in Silly, Belgium; two bottles of Out Of Bounds Stout from Avery; and two bottles of 14'ER ESB Ale, also from Avery. Given how much I liked their Reverend the other night I figured I would check out some of their other offerings.

I have had the Silly Scotch before but I will review all three beers after I drink them on Sunday. I better drink them before I start to hit the Glogg I am making or I won't be able to remember what they taste like.

No point, really, in trying to describe the store. I will let the pictures do the talking. They also sell growlers of beer, but I forgot to take a picture of that. Next time, for sure. Maybe I will even buy one to lend a certain amount of authenticity to my posting.

Anyway, without further ado, the pictures: 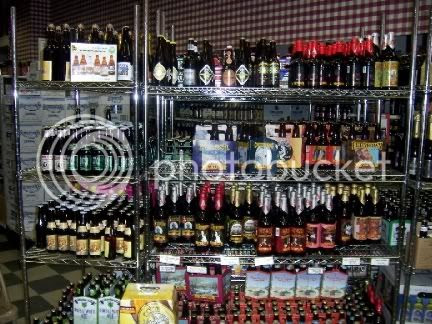 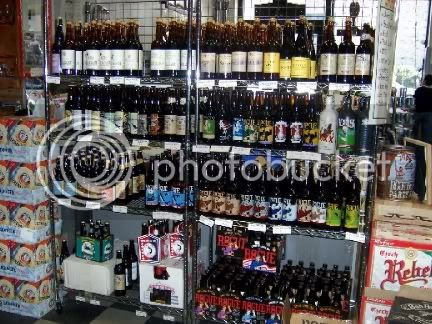 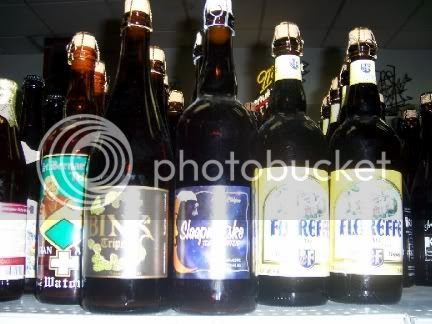 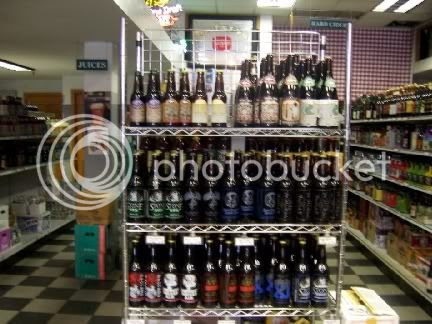 Believe me when I tell you that this is just a small sample of what they have available. It really is a beer drinkers heaven. And just down the street on the way back to my house is the Downtown Bar & Grill where they have hundreds of different types of beer to drink at the bar. I couldn't ask to live in a better place.

One thing, it seems as though nobody that works here actually drinks beer. They can tell you where to find what you are looking for and how much it costs, but they can't tell you a thing about what it tastes like. This is a bit of a drawback, but not too much of one because I like to experiment anyway.

Having made my selection Jennifer checked it out and closed her eyes, either in dismay or in appreciation. How would she know though, she doesn't drink.

Jennifer Checking Out My Purchase 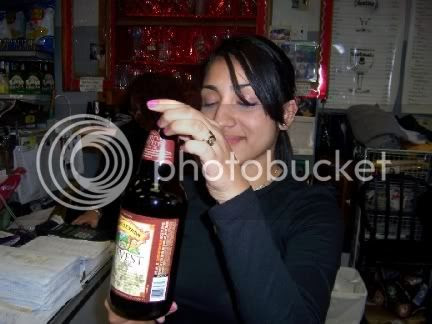 Well, by buddy Bruce was with me and we did have to walk right by the Downtown Bar & Grill, and we had been looking at a lot of different beers so....,

Stay tuned while the adventure continues and we are tracked down like, like, like two guys in a bar who should have been home by now.

By the way, if you want to get more information about American Beer you can just click below to go to their website.

Well, I was minding my own business fully immersed in my second obsession, Everquest. I was planning on staying home and watching the Halloween Parade in Greenwich Village on television last night. Nothing more. Then an Everquest friend of mine, Akkusen, another beer aficionado, asked me what I was going to do for Halloween. It doesn't take much to trigger a desire for beer in me so I immediately began to think of a pumpkin ale or something. Next thing you know I was heading to my old favorite Pete's Waterfront Ale House to get my nose wet. And not by dunking for apples. 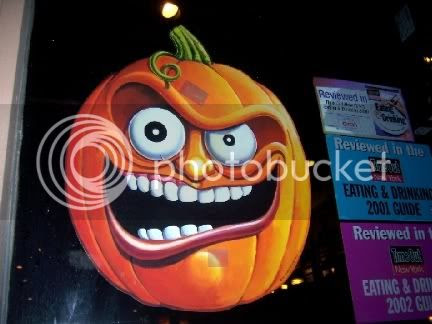 They didn't have any pumpkin ales available but my eye was caught by Avery's The Reverend Suddenly the sounds of the Eurythmics Missionary Man began playing in my head and I had to have one.

Woof, it was a good one. A Belgian Quadruple Ale style coming in at a hefty 10% alcohol. A beautiful tawny color and absolutely delicious. Spicy and malty at the same time with nice chocolate and caramel back flavors. Usually I have several different beers when I hit Pete's, but I stuck with this one all night long.

Bar Man and The Reverend 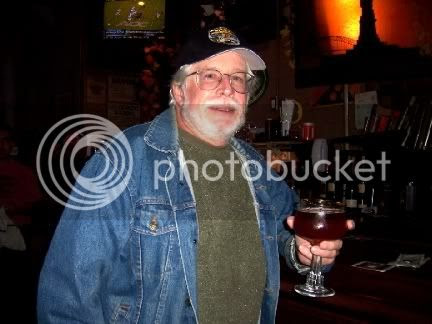 Of course this blog isn't just about drinking and debauchery, it is also educational. That gets me grants and tax write-offs. So here goes the educational part. The Reverend was named in honor of the grandfather of Tom Boogaard. And who, you might ask, is Tom Boogaard. Well, he is, or was, Avery's Sales Manager. And his grandfather was an ordained Episcopal Reverend. And, think about this happy coincidence. It is Halloween and I am drinking a beer associated with Tom Boogaard.

After the beer at the bar the Mysterious Chinese Woman and I headed to a table to have ribs. Again, kind of appropriate for Halloween, I thought. Would have been cooler if we could have just ripped them out of someone.

Mysterious Chinese Woman About To Rip Into Her Ribs 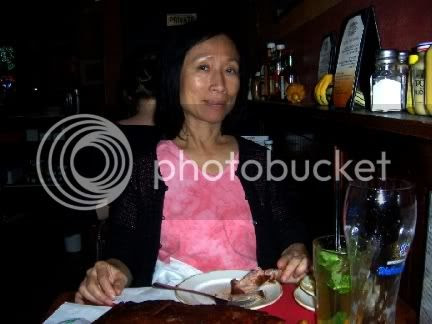 And, believe me, these ribs are worth ripping into. 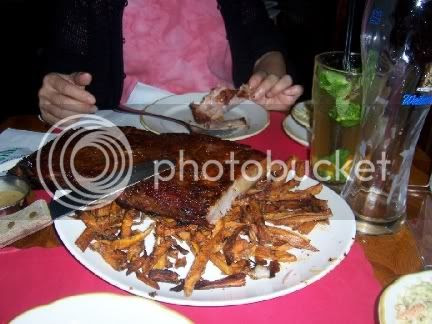 I ordered another Reverend and by a happy twist of fate got it served in a larger pint glass. 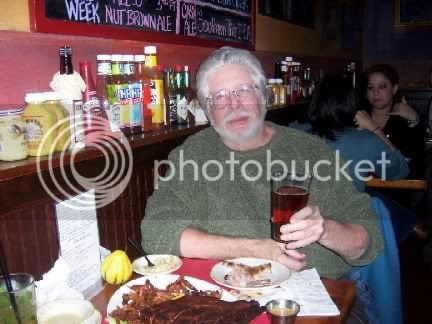 And then, to make the evening complete, my favorite bartender Gaid showed up in costume. At least I think he was in costume. He often looks like this after a night out.

Gaid In Costume, I Think 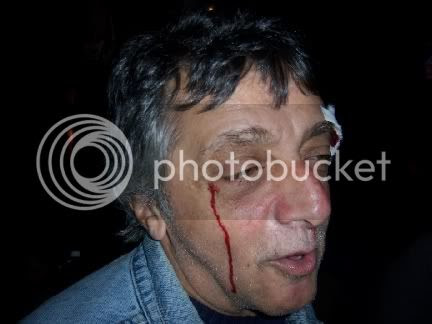 I had one final beer at the bar and then staggered off home. I was going to watch the Halloween Parade on television but fell asleep instead. My evening was a lot of fun though and I have left-over ribs to look forward to for dinner tonight. Life just doesn't get any better than this.

I guess I have to give Akkusen some thanks. If not for his comment (it doesn't take much to set the Bar Man off) I probably would have stayed home.
Posted by Bar Man at 7:43 AM No comments: