Got To Love New York

I won't go into detail about my long and, recently, painful history with the New York Knicks.  But I do have to scratch my head at the wishful logic of Knicks' fans.

When the Cavaliers were on a tear these Knicks's fans were all excited because, so the reasoning went, if LeBron could deliver a championship to Cleveland his work there would be done and he would be more willing to move to New York.

Now, with the Cavaliers not doing so well against the Celtics (my current favorite team because of Kevin Garnett) the logic goes that LeBron will want to leave Cleveland and come to New York.  Why, because the Knicks will have enough cap room to pay him well and surround him with a couple of great players so he has a chance to win a championship.

Hope blooms eternal for Knicks fans who haven't had a team to root for in many years.  I go to Minnesota this weekend for the Annual Fishing Opener gathering and it has been a long time since I have had to try to find a bar with a Knicks play-off game on their television.

But, and remember that you heard it here first, my prediction is that LeBron goes to the Nets and ends up playing in Brooklyn.
Posted by Bar Man at 7:06 AM 1 comment:

Some fascinating news has been coming out concerning the relationship between Neanderthals and modern humans.  It appears that somewhere around 60,000 to 100,000 years ago there was a bit of hanky panky going on between the two.  As a result 1% to 4% of the genome of non-Africans today is derived from Neanderthals.

This may also account for why most hockey players are non-Africans.
Posted by Bar Man at 12:25 PM No comments:

On Saturday I headed over to Williamsburg for the Cask Festival at dba Brooklyn.  The dba in Manhattan was one of the first bars around here that sold cask ales.  They had two of the hand-pump casks installed but usually only sold the ale during the cooler months.

I overestimated the length of time it would take me to get to Williamsburg.  From here, in Downtown Brooklyn, you take a subway into Manhattan and then at Union Square transfer to another subway back into Brooklyn.  Convoluted, but this time I hit all the connections and showed up a bit early. 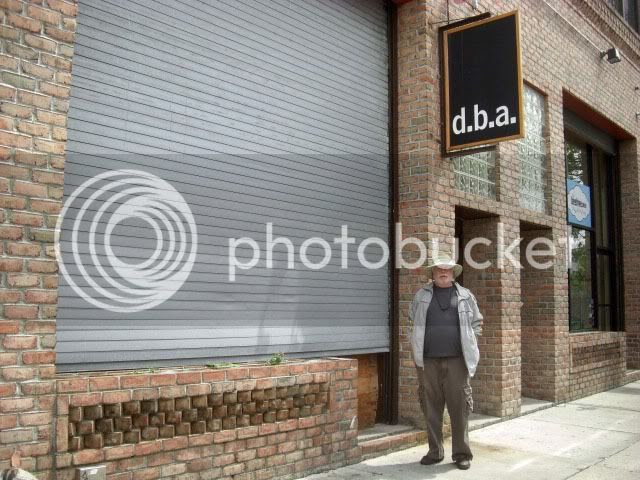 I actually walked right by the place the first go-around.  When it is closed there isn't much to distinquish it from the places on either side.  One metal door looks pretty much like any other.

Although dba Brookyn wasn't open yet Spike Hill was ready for business so I passed a bit of time there.

An Early Morning Kind Of Place 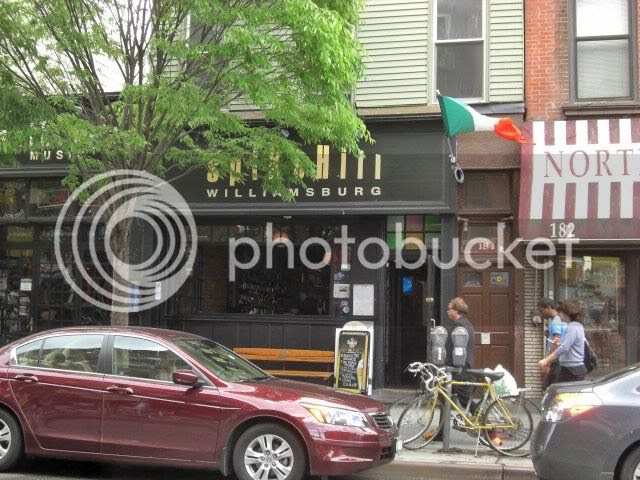 They have a few interesting beers on draft here and the Hacker Pschorr Maibock caught my eye.

Smooth, A Glass Of Brunch 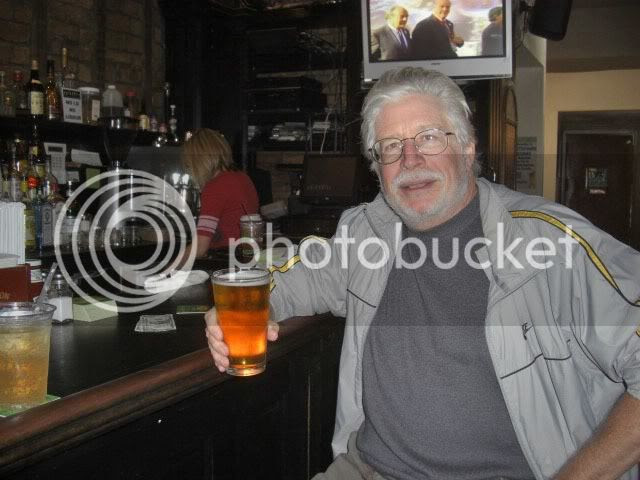 Maibocks are a lighter form of Bock beer and, as you might guess by the name, is typically served in May.  Very good.

I may have had a glass of brunch, but the Mysterious Chinese Woman thought something more substantial might be in order.  Just down the street is a nice little Asian restaurant that we have been to before. 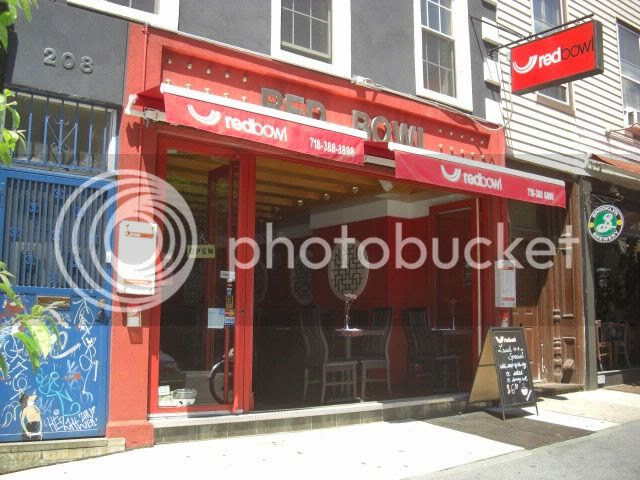 They seem to have a bit of an identity problem.  One sign uses all Capitals and two words while the other signs use all small letters and run the two words together.  I know, picky, picky, picky.

I had a plate of noodles to wash down my Sake.

Sake And Flowers, How Springy 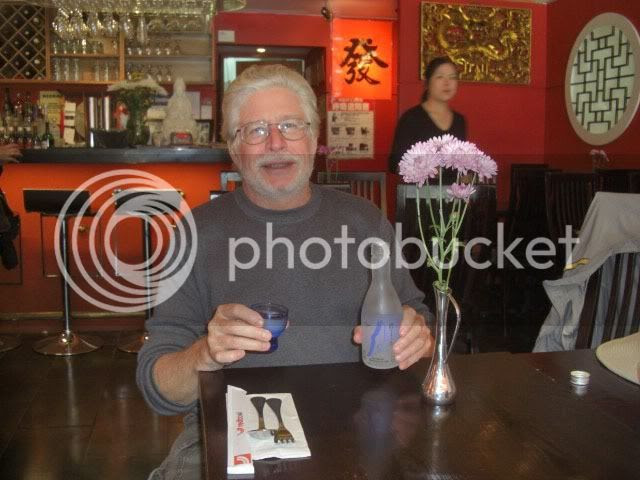 Then it was time to head back to dba Brooklyn. 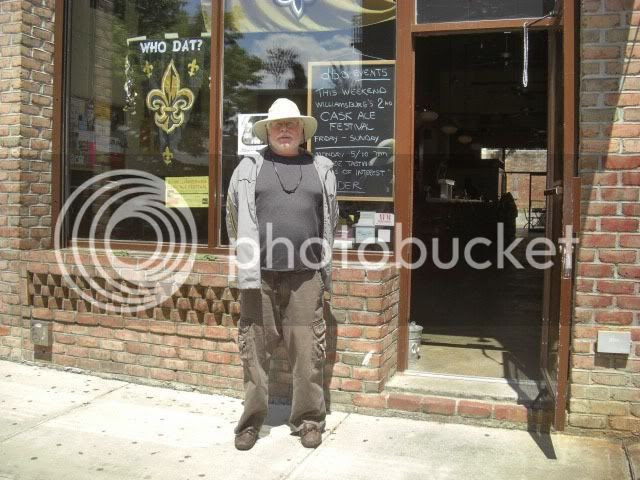 And there was Alex, setting up his wares. 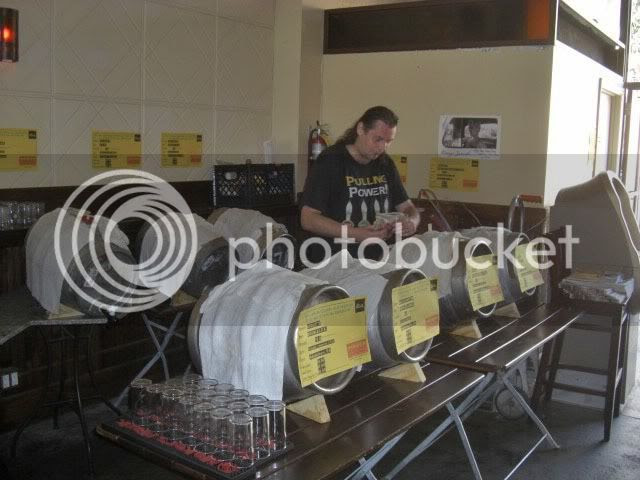 Well, it isn't like it was all fun and games for me, either.  I had some drinking to do.

Started out with the New Jersey '1787 Abbey Single Ale,' a relatively mild 4.8% ABV.  It is in the style of a Belgian Pale Ale and is considered a session ale.  This means it is low enough in alcohol that you can make a session of drinking it.  I thought it was pretty good but had kind of a coppery taste to it.

My next beer, a Fuller's 'London Pride,' was even milder at 4.1% ABV.  You can get the London Pride in both bottles and on draft, but the cask version has much more flavor.  Nice and well-rounded.

I finished up - yes, I know, a short session - with a fairly strong 10% ABV Stoudt's 'Double IPA.'  As you can imagine, this was a fairly hoppy pour.  And the hops was long lasting.  It uses three types of hops, Warrior hops for bitterness and Cascade and Williamette to impart the hoppy aroma. 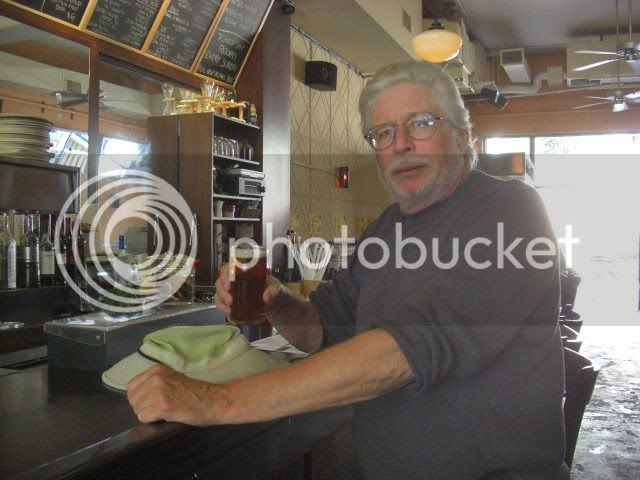 For some reason, maybe because it turned out to be a nice Spring day, I didn't feel like sitting inside drinking cask ales all afternoon.  Note, it was chilly and drizzling earlier in the day, hence the somewhat inappropriate jacket and hat I was wearing.

Anyway, I had been to the nearby Surf Bar before and thought that would be a nice change.  For some reason I thought they served Australian beers.  Maybe the used to, or I am getting it confused with the Sunburnt Cow in Manhattan, which is an Australian bar with a surf theme to it. 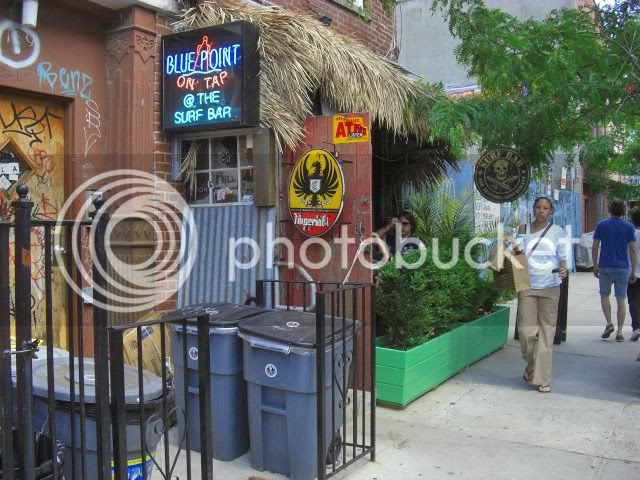 Well, no Australian beers this time around, but they had a nice outdoor seating area. 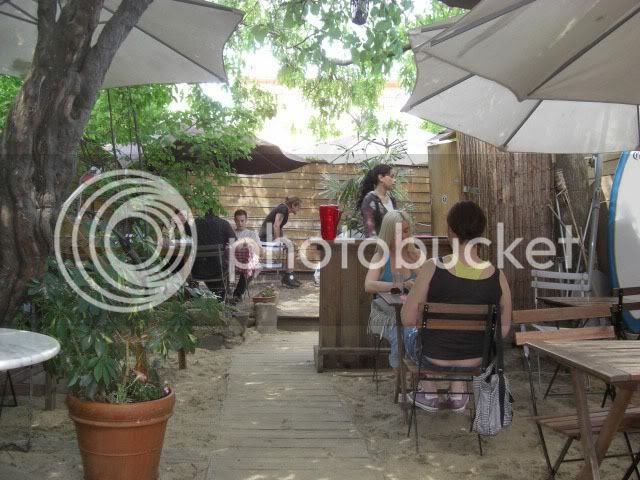 They had a number of Tiki drinks, but I didn't like the looks of the recipes.  A bit on the sweet-side for me.  On the other hand, the Mysterious Chinese Woman found the Zombie to her liking.

What A Pretty Zombie 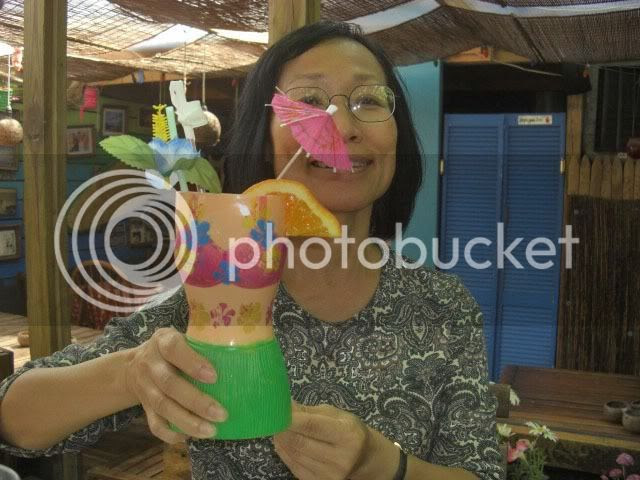 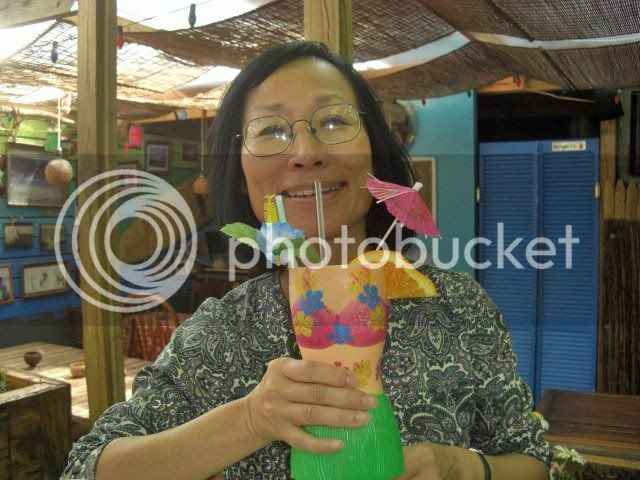 I have been on a bit of a Margarita jag lately so that is what I had.  Not bad, but not as good as the ones I make.  Alton Brown had an episode of Good Eats the other day where he demonstrated his Margarita making skills.  I will have to try it his way.  He doesn't use any orange liquor, kind of a staple, but does use fresh orange juice.  He also makes a big deal about muddling the limes and ornages with a bit of agave syrup to extract all of the oils from the skins.

Another tip, he dips the glass in tequila and lets it dry for ten seconds before dipping it into salt.  I will have to try this next time.

Not One Of Alton Brown's 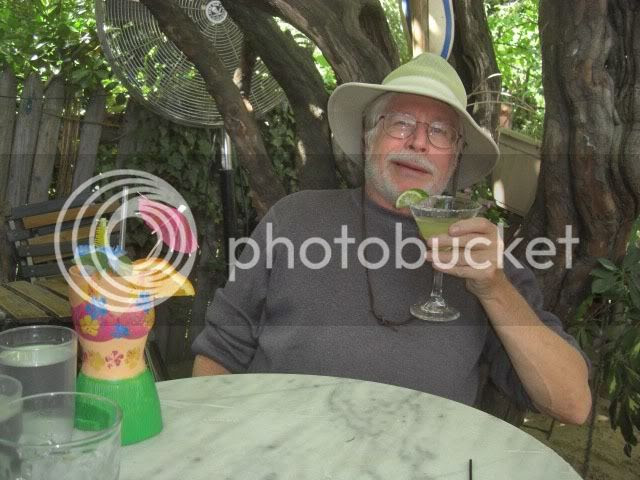 Then it was back home after a quick stop at Spike Hill for a bathroom break and one final Margarita.

After heading back to Manhattan there was Jim, but he was by himself.  Apparently the Mysterious Chinese Mother-In-Law didn't feel like going out.  So we ended up the evening with dinner, a couple of Rob Roy's and an after-dinner Rusty Nail.

But First A Word From Our Sponsor

Not really a sponsor, just my favorite neighborhood bar that, by now, you probably know is Pete's Waterfront Ale House.

I popped in on Friday for a quick bite and they had a corned beef sandwich on the special menu board.  Sam, the grilll-master, was there and I asked him if he did his own brisket.  I should have known, of course he did.  The spicing and brining and smoking, the whole thing.  Well, how could I resist. 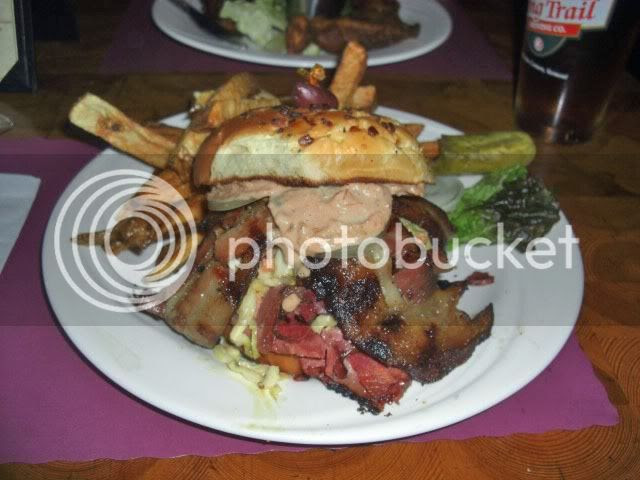 It didn't take me long to dig right in. 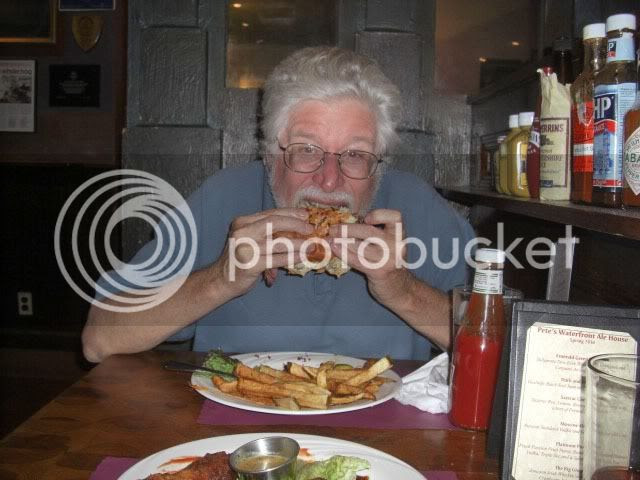 I have said it before but it is always worth repeating, the food at Pete's Waterfront Ale House is always surprisingly good.  They don't advertise themselves as a rib place, yet their ribs are some of the best I have ever had anywhere.  And they sure don't advertise themselves as a deli, but their corned beef  sandwich, dare I say it, was even better than Katz's.  Smokier, which I prefer.

Now they don't often do a lot of Mexican food, but I think they did have some Cinco de Mayo specials last Wednesday.  They do, however, have pretty decent Margaritas.

Good To The Last Drop 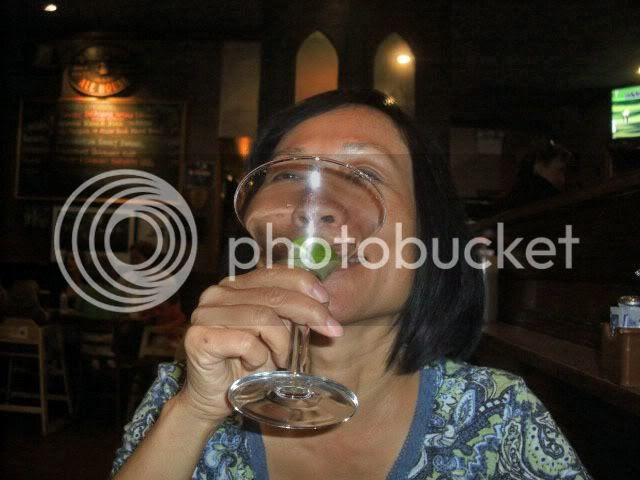 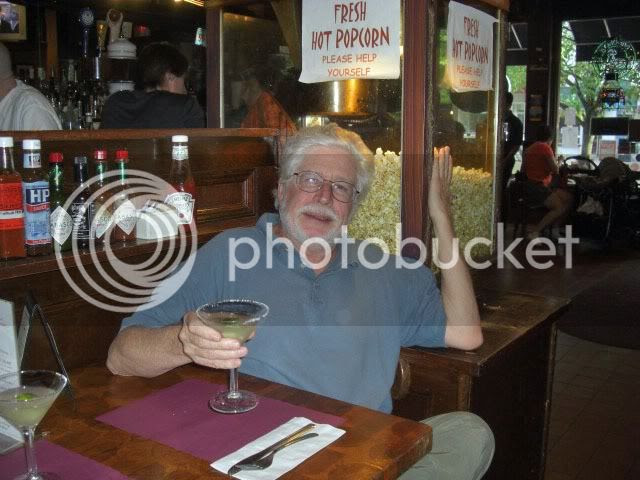 The next day, Saturday, I went to dba Brooklyn for another cask ale festival, but more on that later.

And The Pot Calls The Kettle Black

Is it just me, or does an obviously obese or, at least, very over-weight, U.S. Surgeon General warning about the dangers of obesity seem, well, a bit strange?

Hey, Cut Out The Cupcakes 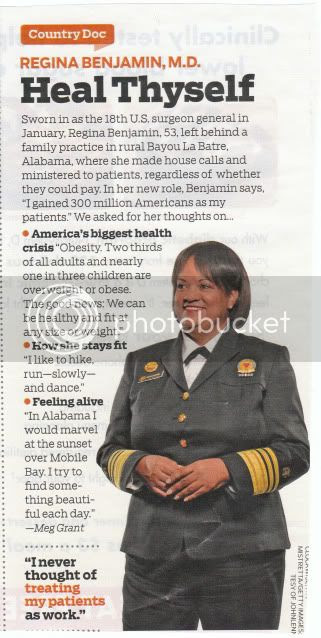 Kind of like me warning about the dangers of drinking.

And what's with that "I never thought of treating my patients as work" all about.  You are a doctor.  You see your patients while you are at work.  What, you treat them as a hobby and don't charge them?

Sanjay Gupta should never have turned down this job.
Posted by Bar Man at 11:13 AM No comments: