Although the food in Costa Rica was delicious, I had built up a hankering for some good old ribs. Luckily, my old favorite, Pete's Waterfront Ale House, has some of the best in town.

Well, I never got the ribs. It wasn't because they didn't have any though, they are always on the menu. It was simply that I was too intrigued with the evening's specials. 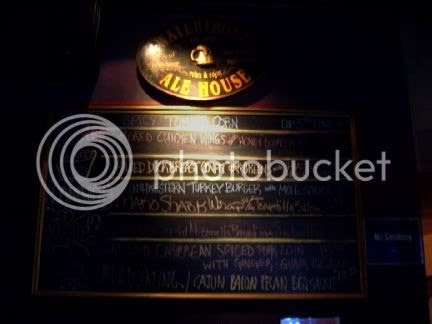 As I said, they always have ribs, but how could you pass up something like Grilled Caribbean Pork Loin with a Ginger and Guava Glaze? Well, I couldn't. 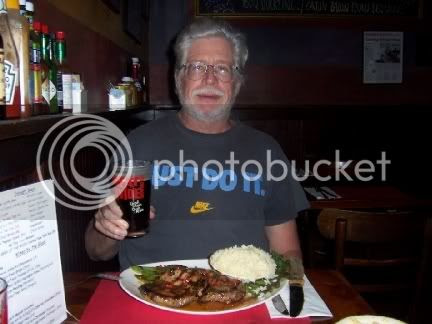 And, as you might expect, it was absolutely delicious. They also have some of the best coleslaw I have ever had. I think it has a touch of horseradish in it to give it a nice bite. And they serve you a decent sized portion too, not one of those little paper cups like you usually get. 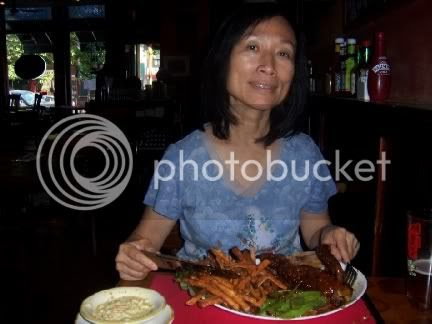 She said it might have been the best duck she has ever had. Now that is saying something, especially because I pride myself on my own smoked duck. Even I couldn't really argue though.

Of course we washed everything down with a selection of beers, something else Pete's is good for.

I started out with a Southern Tier Hop Sun Wheat Beer. If you have ever had any preconceptions of what a wheat beer tastes like, this one will forever change them. If you didn't know it was a wheat beer you would probably think was an IPA. It is very flavorful. It has just a hint of wheat to it and a bit of citrus. What really comes through is the hops though. And not just the bitterness, the aroma and taste is very distinctly that of fresh hops. This is a beer I could easily drink all night long. Hell, I could drink it all morning long too.

But, inveterate seeker after the new that I am, I moved along to a Chelsea N.Y. Rye IPA. The Chelsea brewery is a great favorite of mine. They are located on the west side of downtown Manhattan and have a nice bar and restaurant right next door. It is on the Hudson River so you have a nice view and can daydream about owning one of the yachts parked outside.

Back to the beer though. It had a nice orangish color and the white head made it a very pretty drink indeed. After the Hop Sun it tasted a bit washed out, but that was probably only in comparison. The Mysterious Chinese Woman said it was a bit too hoppy for her. A bit of sweetness comes through and just a hint, perhaps, of rye. Another nice session beer.

I decided I wanted something with a bit heavier to go with my meal though so I ordered an Avery Ellie's Brown Ale. Not much hops in this one. In fact it was a bit on the sweet side with a hint of smoke. Perfect accompaniment to the meal. I wouldn't sit around and drink this all night, but it did hit the spot. Bring a six-pack to your next barbecue.

Started out the day by visiting others in our group that were staying at a hotel right in downtown Tamarindo. To get there we walked into town and passed under an overpass made of matting that crossed the dirt road. This was put this up to let the howler monkeys who lived on one side get to a hotel on the other that put food out for them.

Heading To The Monkey Bar 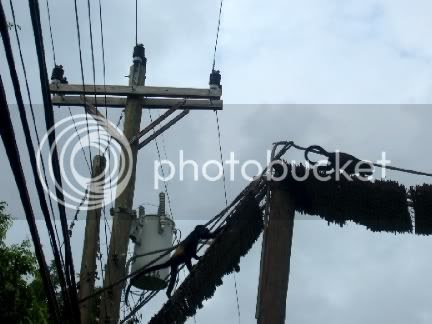 The hotel was quite nice but had a name with an unfortunate connotation. I felt like I should be reaching for my Imodium. 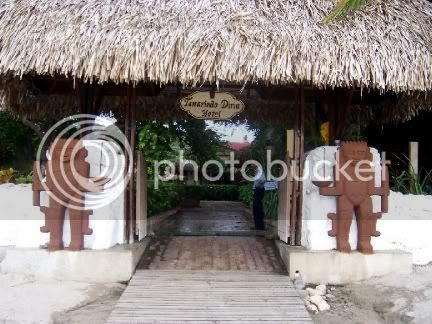 They did have a nice bar area built like a large palapa, and that was where I was headed to meet my friends. 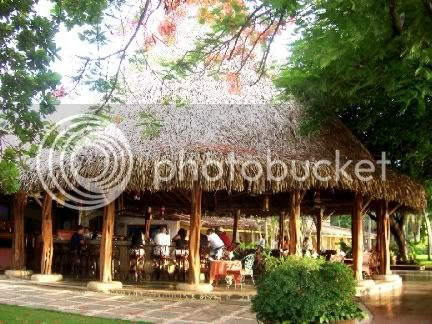 I decided to have a rum and coke and sit for the obligatory bar shot.

Bar Man At The Bar 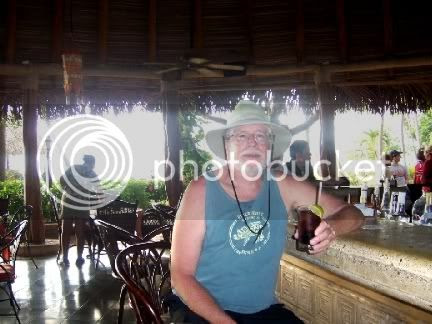 One of our group had slipped on a rock while climbing to the top of a small waterfall. She sustained quite a nasty bruise and seemed to delight in showing it off to everyone. She was a nurse and they seem to have a thing for injuries. I am a guy, so I have a thing for nurse's thighs. 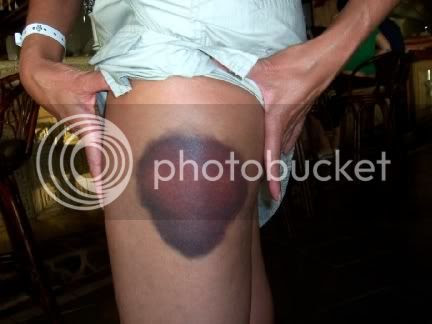 We were going to have a group dinner to celebrate our last night in Tamarindo so I decided to stop for a beer before meeting everyone later. This was a neat looking place, but it was just opening up. The bartender said it is more of a late night joint, and it looked like it. I don't mind drinking alone though, so I had a beer. 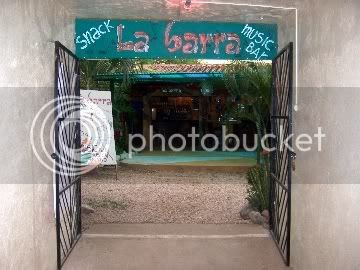 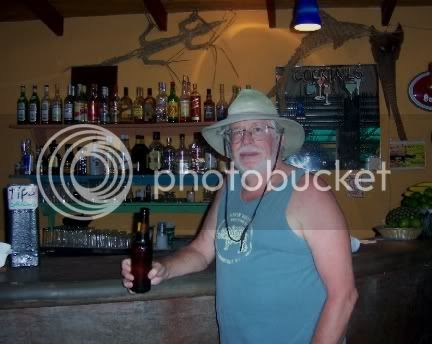 After finishing my beer I headed to Zully Mar for dinner. 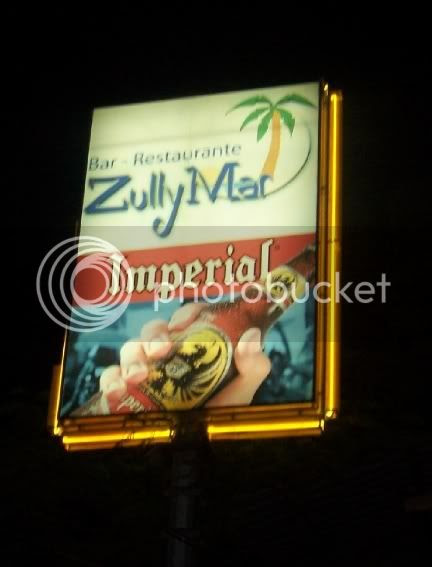 I got there a bit early so I decided to have a drink at the bar while I waited for everyone to show up.

Bar Man At His Usual Spot 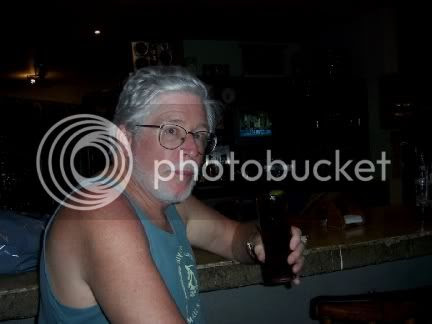 Eventually the rest of the group arrived and people were so happy to see us that we got a serenade. What a treat. 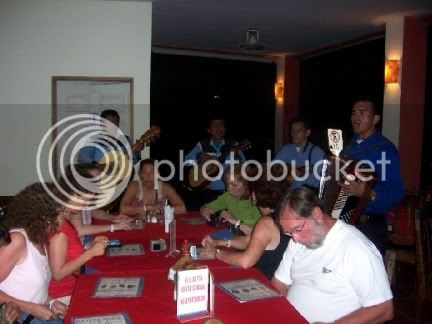 The following day was pretty much a bus trip back to San Juan with a quick stop for lunch and a visit to a souvenir shop. Barely time to get cleaned up and head to a steak house for a final farewell get together before we all called it a night and then caught our planes home the next day. 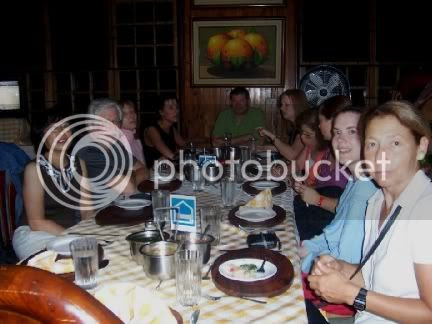 All and all it was a very nice trip with a good group of people. One day I might go back just to spend a bit more time in Tamarindo. So many places to go though, and so little time.
Posted by Bar Man at 12:24 PM 1 comment: