A new place opened up not too far from me on State Street and Hicks. I have been there twice and it is quite nice. 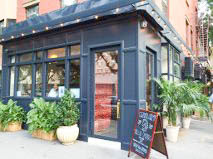 Beers are a bit on the pricey side and you don't get a pint like in most places. But they have a decent beer selection. Next time I will post it but didn't get a clear picture. But, as you can see, I enjoyed my beer.

They have $1 oysters during happy hour, something of a trend around the neighborhood and one that I am happy to see. And they serve them with an interesting selection of sauces. I could use a bit of just plan horseradish, though. But these were quite good. I liked the chipotle the best.

I slurcked them right down. Not sure what kind they were. Bit of an unusual shape, elongated. But they were very good and decent sized. No complaints from me.

For dinner I had the smoked octopus and it was excellent. I would return just for that, but next time I am going for the steak tartar. If they prepare that as well as the octopus it will be dynamite.

I can't remember for sure what the Mysterious Chinese Woman had but I am guessing it was the striped bass. They don't have a real extensive menu, but what they have, at least what I had, was really good. And she really liked whatever it was she had.

I apologize for the quality of the pictures. I forgot my camera and so the pictures were taken with a new iPhone and I don't think I had the settings correct. But you can see more by clicking the link.

Stay tuned, I plan on posting more frequently, but certainly not as frequently as I once did.