Kind of like Ricky Nelson's Garden Party, only he was singing about a concert he gave in Madison Square Garden.  I would go into more detail but I promised to post pictures of last night's affair at the Puerto Vallarta Botanical Gardens before I head off to play Mexican bingo and have dinner.  I will add my always witty and vastly entertaining verbiage later so check back tomorrow if you are so inclined.

I must say, though, that this was supposed to be a night of 1000 Candles and a friend of mine, Gary, charged me with counting them to make sure we got our pesos worth.  I counted 1013 but may have missed a few in the women's banos.  And I probably double-counted at the end after a night's worth of free Margaritas and cervezas with a few glasses of purchased wine thrown into the mix.

Anyway, here are the pictures and tune in tomorrow for the rest of the story.

Okay, here is the rest of the story.

First, because I was busy putting together the pictures for this post I ended up getting to No Way Jose! too late for the Mexican Bingo.  The place was packed with a turn-away crowd.  Hey, it was a charity event so I am glad that they did well.  I had time to kill before heading out to a little dinner soiree so I went to the upstairs dining area for a drink and a little nosh.  It was so nice up there that I decided to book reservations for Valentine's day.  But more on that in another post.  Back to the garden party.

Marie And Bar Man And Margaritas 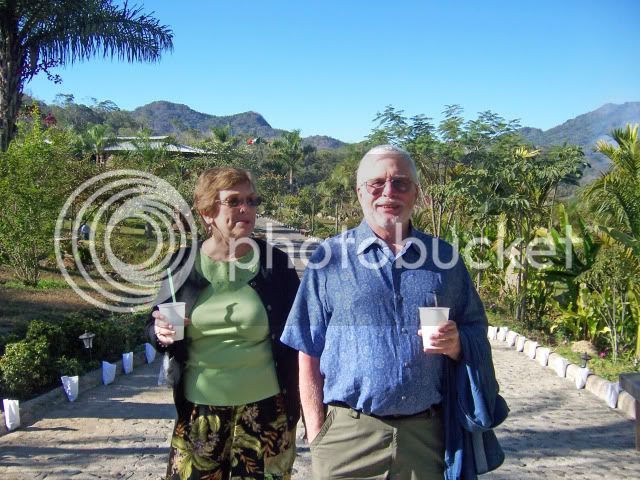 Now don't get excited, I hadn't forsaken the Mysterious Chinese Woman,  Marie is Peter's wife (see the post on the Super Bowl Party) and she came to the Botanical Garden affair sans Peter who, apparently, isn't into flowers. At least not enough to cough up the 500 pesos to become a member of the Botanical Garden.

The Walk To The Main Building 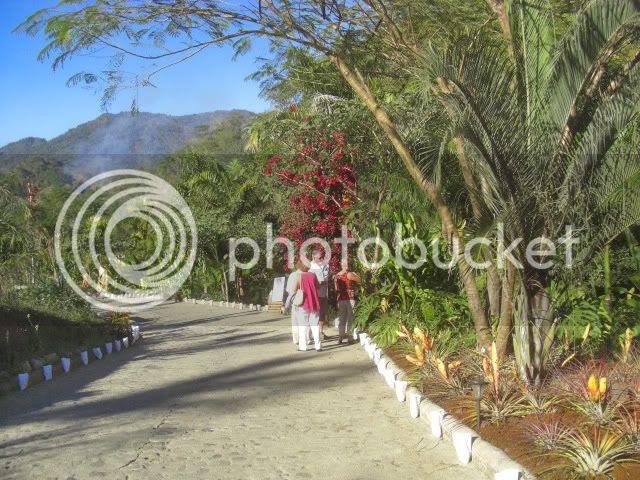 This is my third visit here and the place just continues to grow and sprawl.  Lovely nature walks, one along a river that ends at a swimming hole.  We didn't take any of them this time because we had a party to go to. 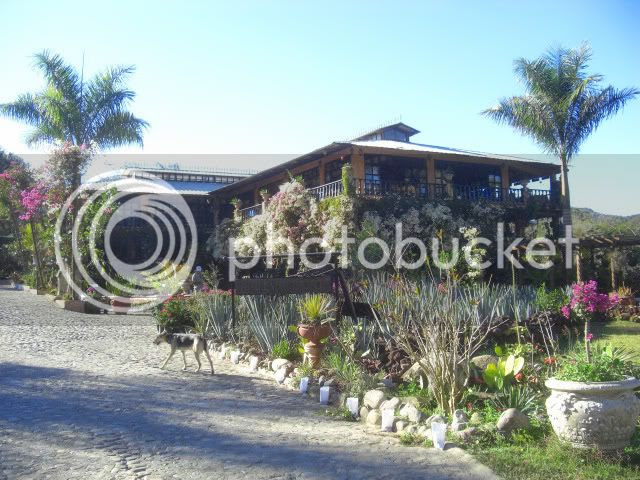 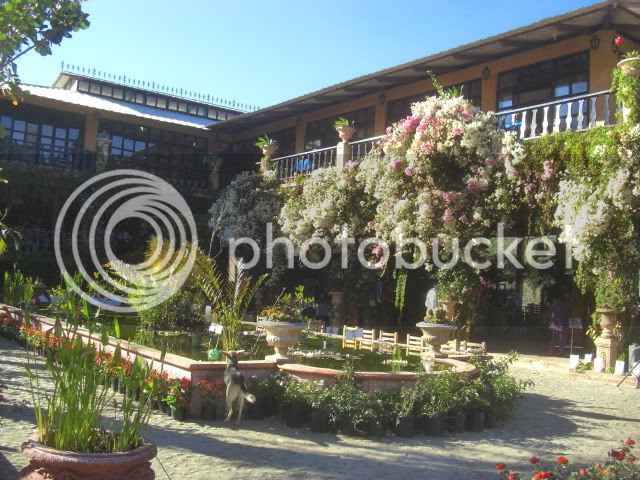 Some Of The Crowd 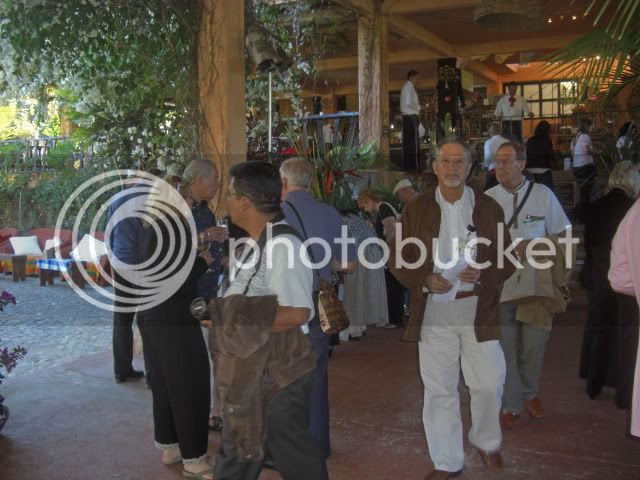 And no lily pond would be complete without a sea-serpent. 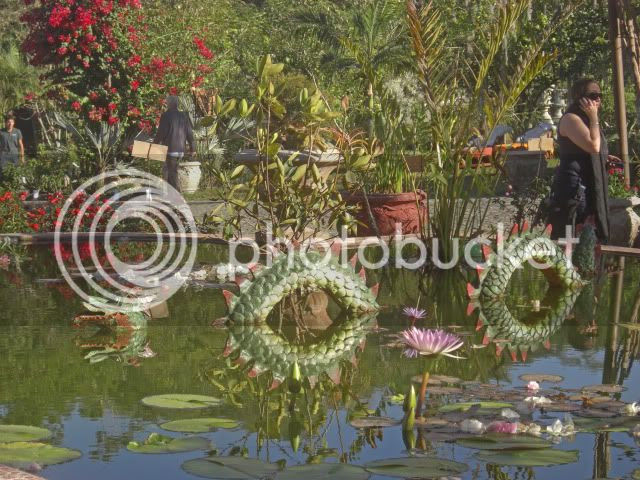 That was in reference to a favorite childhood television show of mine that featured Beany and Cecil, the sea-sick sea serpent.  Hey, if you remember that maybe we can discuss Rootie Kazootie.

There was a nice little crowd.  Actually, quite a large crowd.  Three bus fulls and quite a few people who came by car as well. 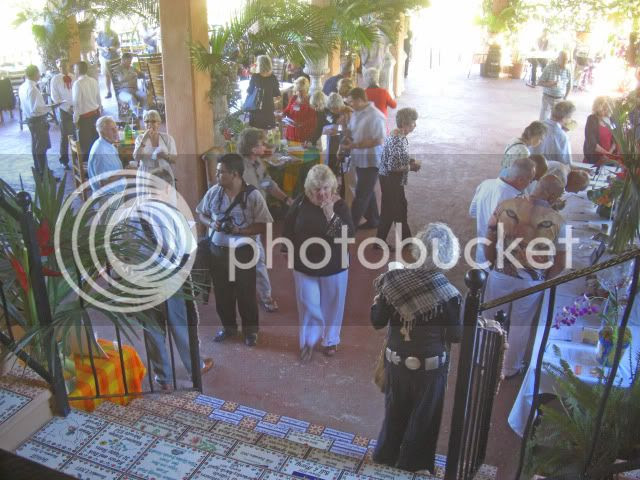 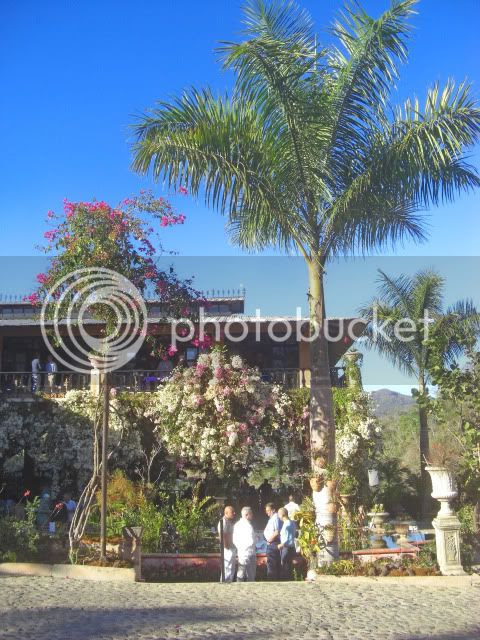 Now I don't know about you, but when I was a kid, back in the Beany and Cecil days, you could send away for your own real insect eating Venus Fly Trap.  The advertisements in the back of the comic books always featured quite lurid pictures of a giant Venus Fly Trap chomping on some horrifying and humongous looking insect.  Of course what you got were four of five scrawny little things that never seemed to live longer than a day or two and would never eat anything.  The ones here were closer to what I had hoped to get.

And A Big Bug Too 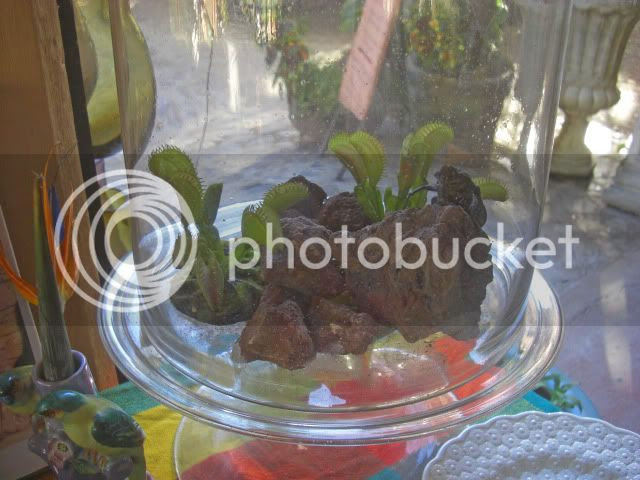 There was also a gift shop where you could buy a variety of souveniers.  The had some nifty tee-shirts and if I visit again this year I will pick one up.

I Liked These As Well 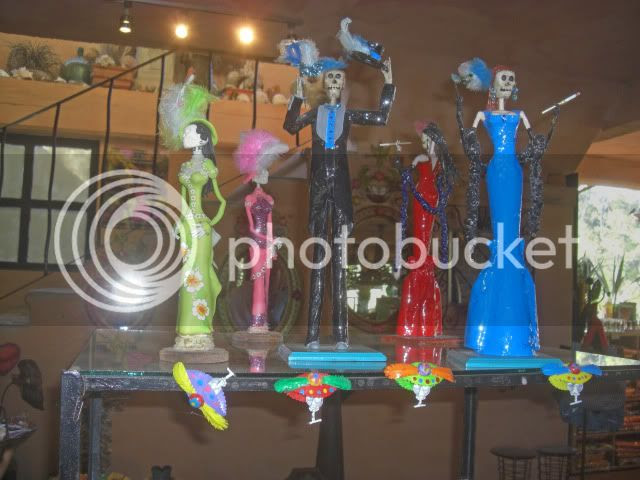 They had a silent auction going on and the people at the table are deciding whether or not to bid on the donated prizes.  The prizes ranged from plants, naturally, to a seven day stay at an exclusive resort with accomodations for six.

Hmm, Do I Really Want This? 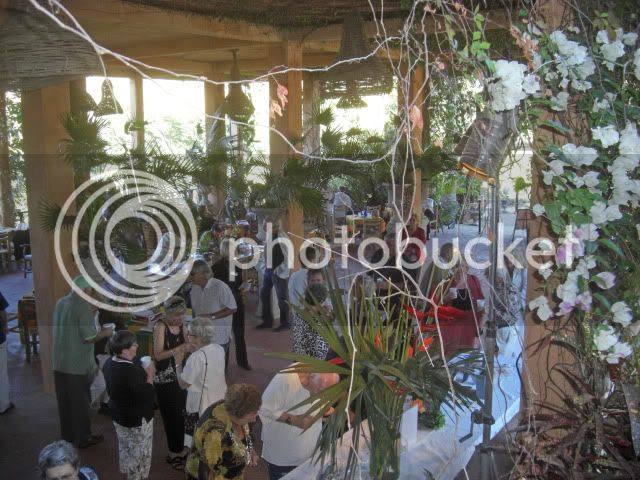 And We Were Seranaded Throughout 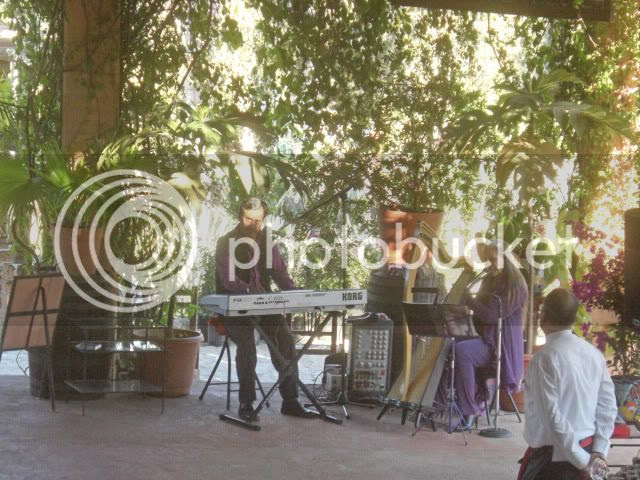 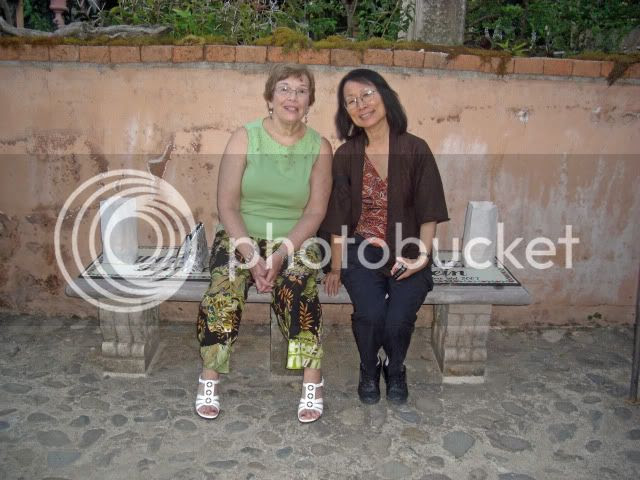 As the sun set it nicely illuminated the mountains in the background.

Believe Me, It Looks Specacular In Real Life 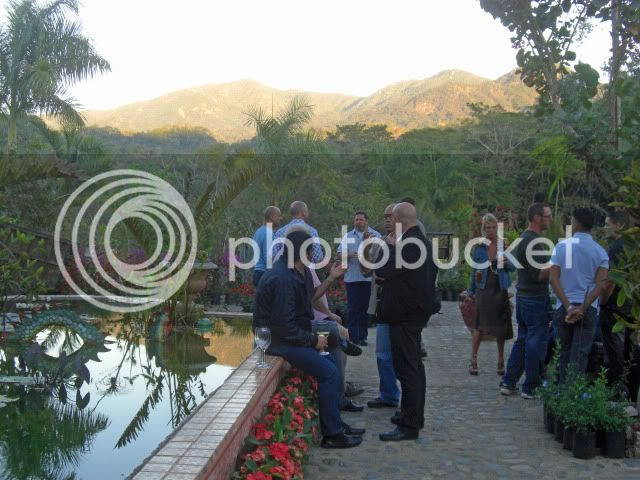 During the silent auction they served pizza appetizers and, in my opinion, they serve the best pizza in Puerto Vallarta here.  The make them in a wood burning brick oven and the crusts are thin and crispy.  And the toppings were great as well except, perhaps, for the pepperoni. Not that the pepperoni is bad, it just doesn't taste like what I am used to.  But these pizzas would definitely rank right up there with the best that you can get in New York.  Chicago pizza fans may have a different opinion, however.

And then there was the buffet.  Tamales and chicken prepared in a variety of ways and a very spicy creamy corn dish.  I had the chicken mole and it was one of the best I have ever had.  They had more, but the chicken mole, tamales and corn were plenty for me.  I could have eaten more but I kind of went overboard on the pizza. 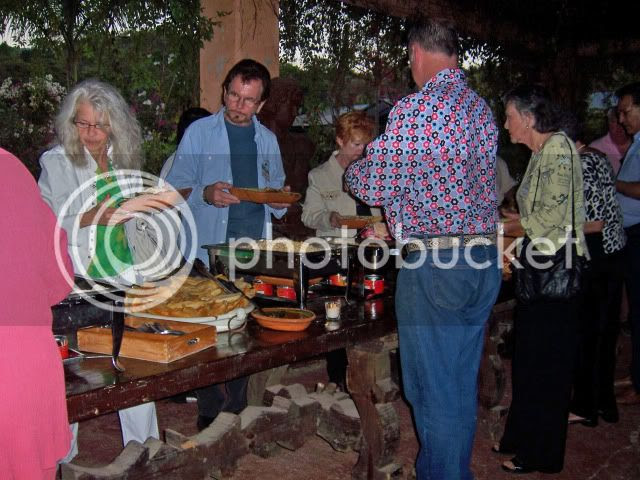 The had children from El Tuito all decked out in their traditional garb dancing for us as well. 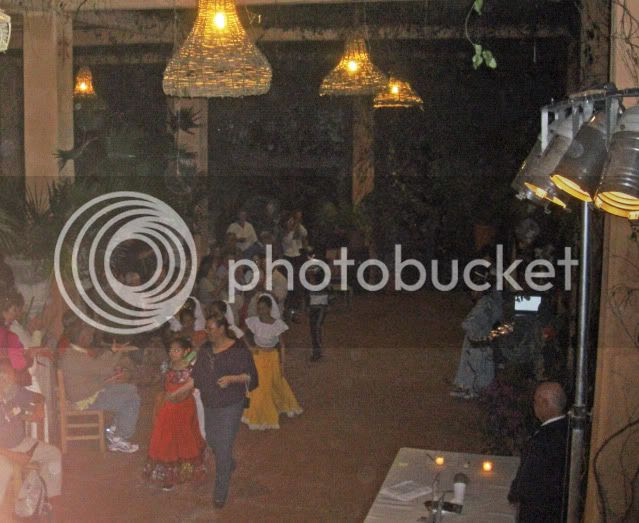 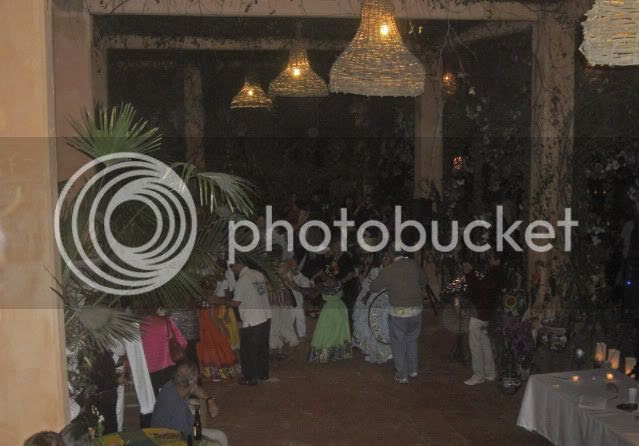 And, then, all too soon the evening was over and it was time to head home. 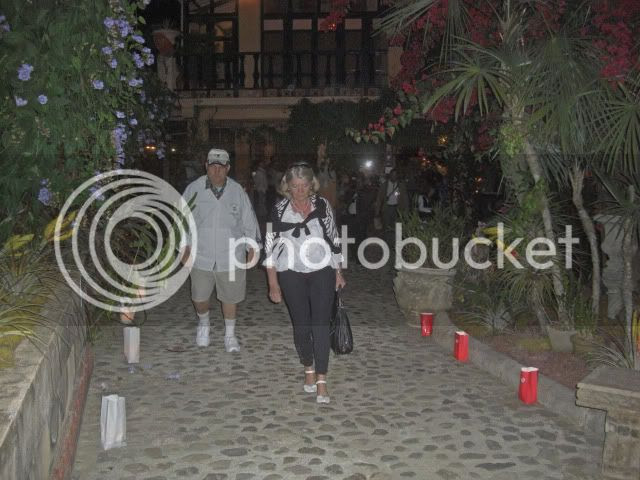 The candles had all  been mysteriously lit and the whole garden, or at least the paths, took on a magical appearance.

One Last Look Back 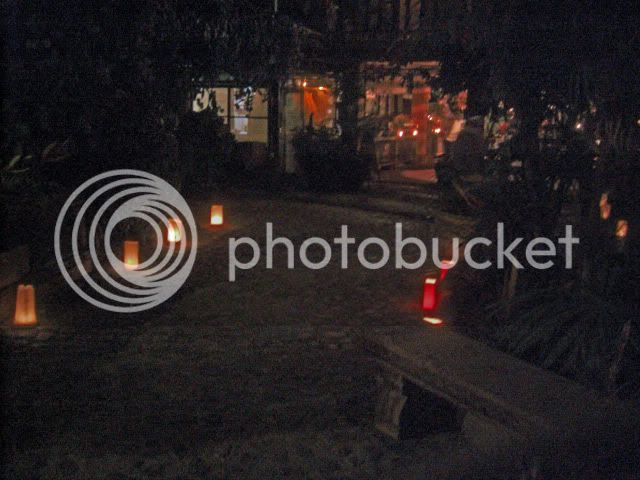 And A Look To The Future, Or A Least To The Bus 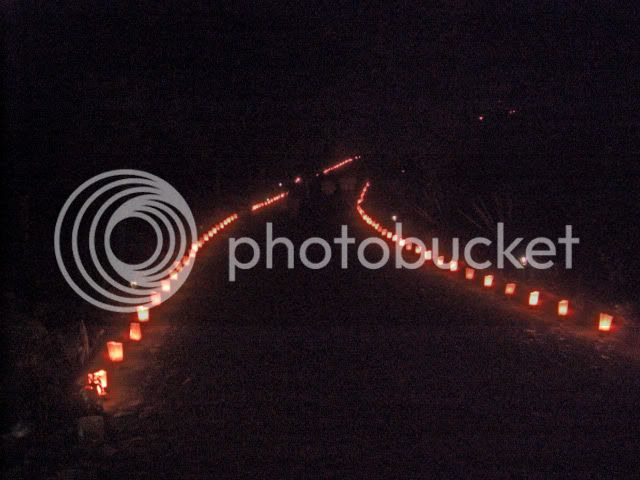 And now that I am an offical Botanical Garden member I can get 10% off when I go back to buy my tee-shirt, and get a whole pizza for myself.  Well, maybe I will share it with the Mysterious Chinese Woman.

Oh, and Ricky Nelson's garden party?  When Ricky, by now Rick, Nelson played Madison Garden with his Stone Canyon Band in  he was pretty much booed off the stage because he was playing his newer country-style music instead of his old 1950;s hits.  Mr. Nelson was more than a little miffed about this and his song "Garden Party" is basically a slam of the unappreciative crowd.
Posted by Bar Man at 5:56 PM