I must be one of the only gringos to ever have to buy a laxative here in Mexico. But after a three day stoppage I had no choice. Now, five major morning dumps later or, more precisely, five major dumps this morning, I feel fine. The strong Mexican coffee also helped, I am sure.

The weather here is still overcast in the mornings and late afternoons with a smattering of light showers. I just read where the storm we had here last Tuesday had winds of up to 85 miles an hour out by Punta Mita, the north end of the bay.

We still have high waves and earlier I got some pictures of surfers right here on Los Muertos. Kind of unusual, they are normally further out of town where the waves tend to be higher. The pelicans are still flocking here so the fish must still be blowing in as well. I haven't seen any whales or dolphins, though.

I will try to post some more pictures tomorrow when I have a better connection and can upload them. I can sometimes get a weak wireless connection out on my balcony, like now, but not good enough to upload pictures.

Here is a picture I already uploaded, just to add some color (other than brown) to this post.

The Local Fruit And Veggie Vendor 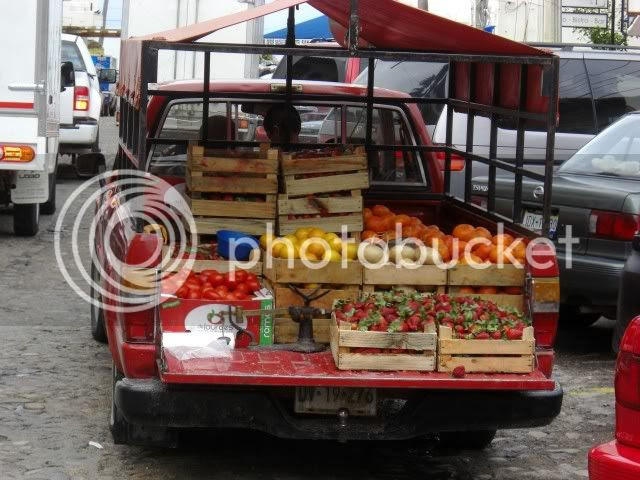 My brother-in-law Jim thought that the Mysterious Chinese Woman and I maybe thwarted an alien invasion when we killed the little white worms yesterday (too much Godzilla vs Mothra when he was young). A Mexican friend of mine said they were just baby maggots. I would have been happier if they were, indeed, aliens.
Posted by Bar Man at 8:41 PM

Having a stopped up pooper is no bueno! Glad the plumbing is in working order again...how fulfilling!