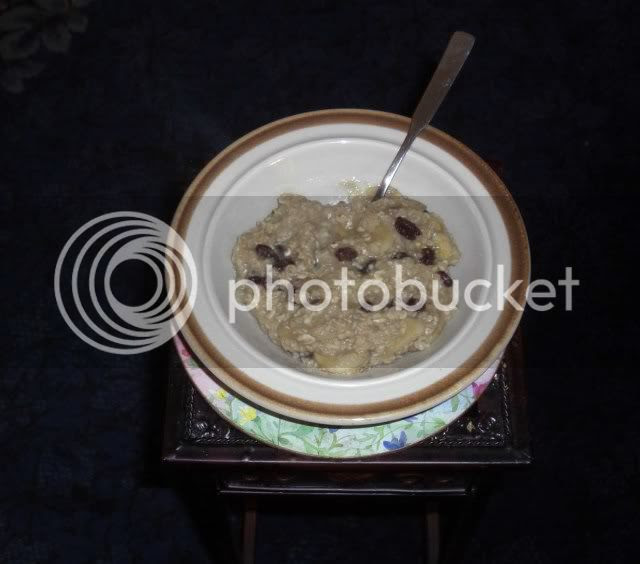 I stopped in at Trader Joe's for the last of my grocery purchases. I really went overboard too. Two bananas at 19 cents each and a potato for 38 cents. Probably not too many people walk out of Trader Joe's and only spend 77 cents. I asked the cashier to double bag it too, just to see her expression. It was, shall we say, one of confusion.

I broke out all of the ingredients for my hash including my last chunk of beef and the two best looking carrots that I had left. The half-dozen or so that remained went into the garbage, they were beyond salvation.

Ready For The Master's Touch 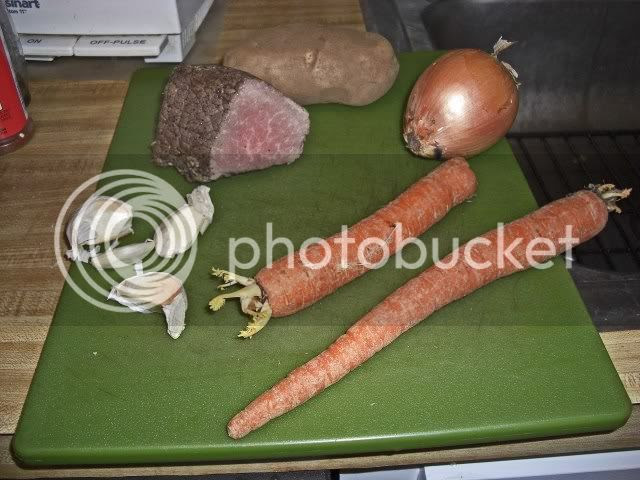 First, I peeled everything that needed peeling. 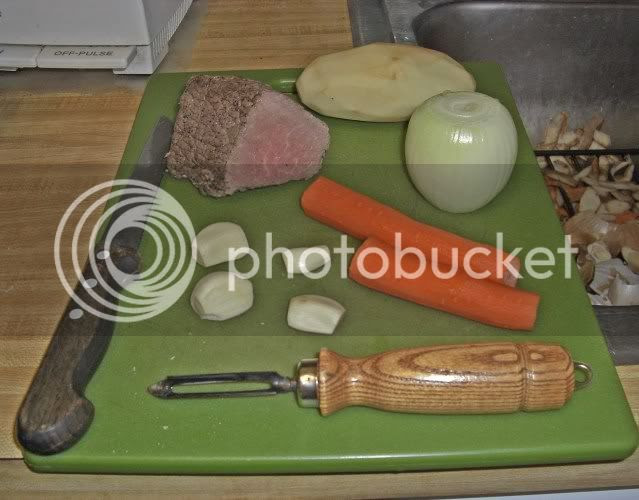 Next I diced up the potato and my two carrots. I derive a certain peaceful satisfaction when I slice and dice things. I am not very fast, though.

First Round Of Dicing Is Done 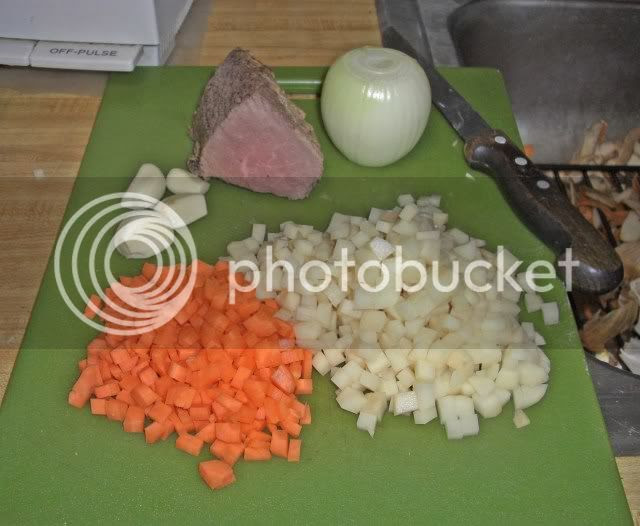 Because the carrots and the potato need to cook the longest they, of course, went into the frying pan first. About a half a tablespoon of olive oil beat them in there, though. 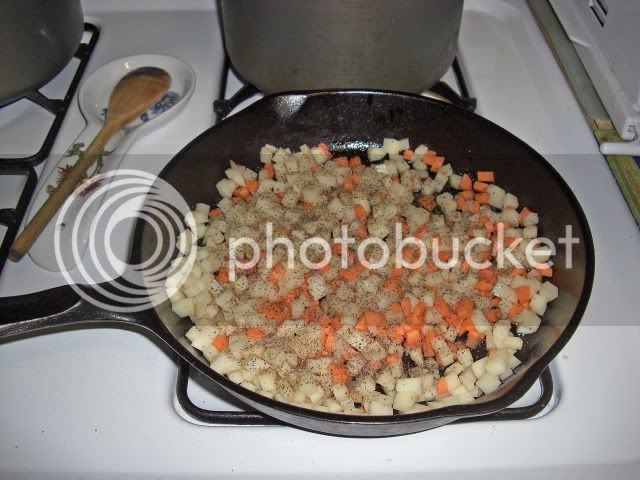 While the carrots and potato were starting to cook up I diced up the garlic and onions.

The Second Stage Of Dicing Done 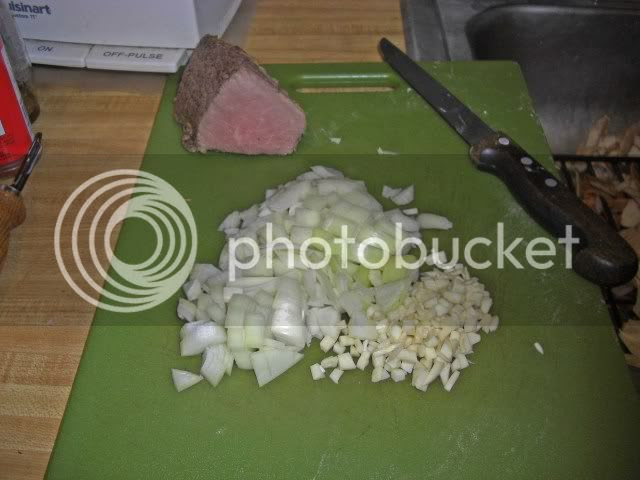 And into the pan they went as well.

All The Veggies Happy Together 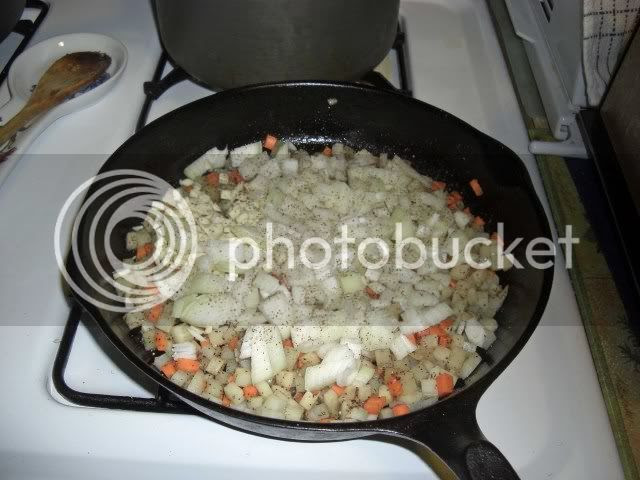 For the meat I broke out my finger-slicer special. By far the sharpest knife that I own. If it ever gets dull I will take it in and have it professionally sharpened. I sharpen all of my other knives, but this one I think I will pass on. 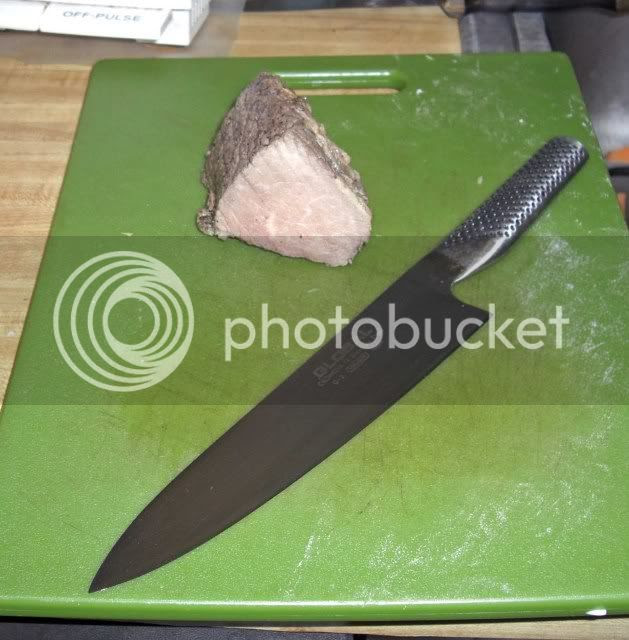 After I chopped up all of the meat I realized I probably didn't have enough. I shouldn't have nibbled. 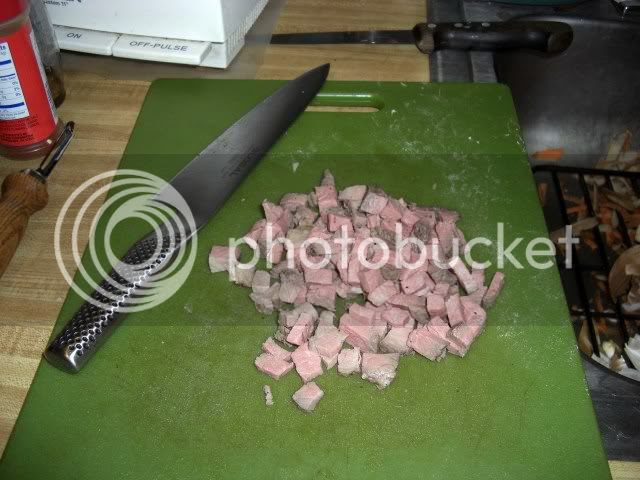 I had at least one pack of pork left in the freezer (there might be another one in there someplace, I forget) so I dug it out and stuck it in the microwave for about a minute and a half and then chopped it up too. 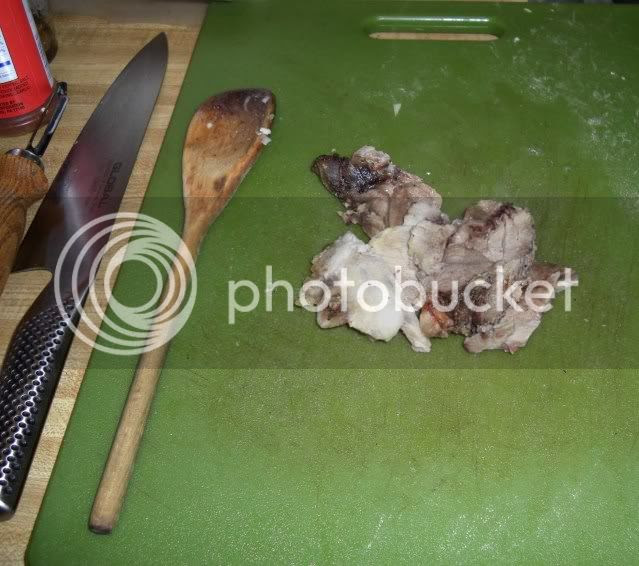 And then threw the meat on top of everything that was already in the pan and let it fry up for a few minutes more.

Everything But The Kitchen Sink 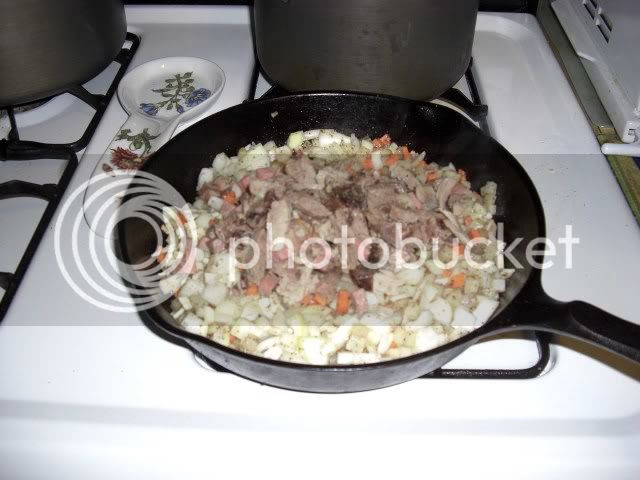 I just fried it over a fairly low heat until everything was nicely browned. 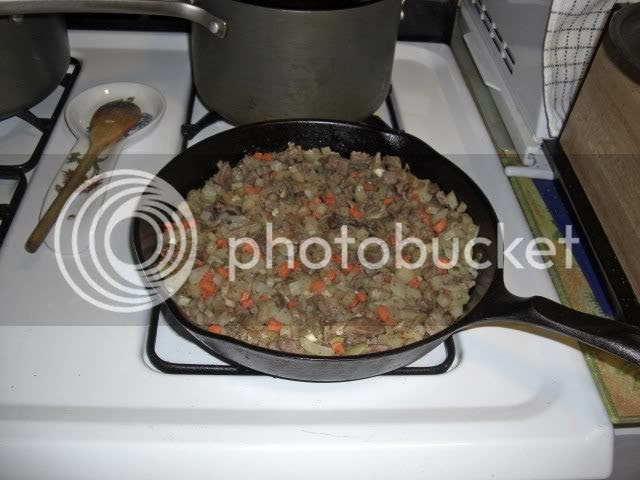 I dished myself up a very healthy portion and I had my lunch. 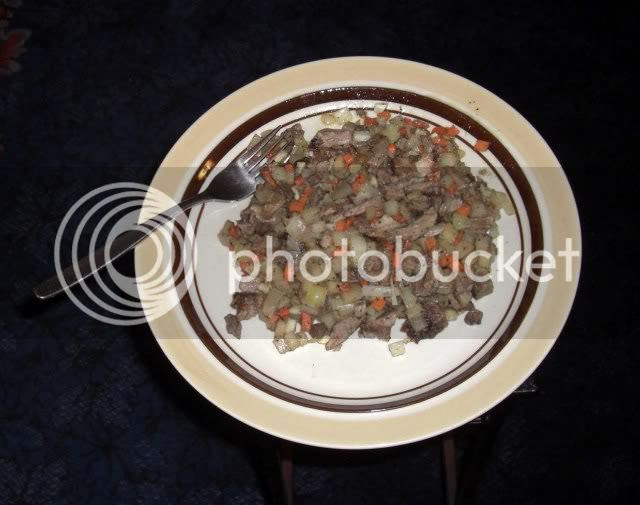 I made a pretty good batch, so there was a lot left over.

I Made A Good Dent, But Still, Just A Dent 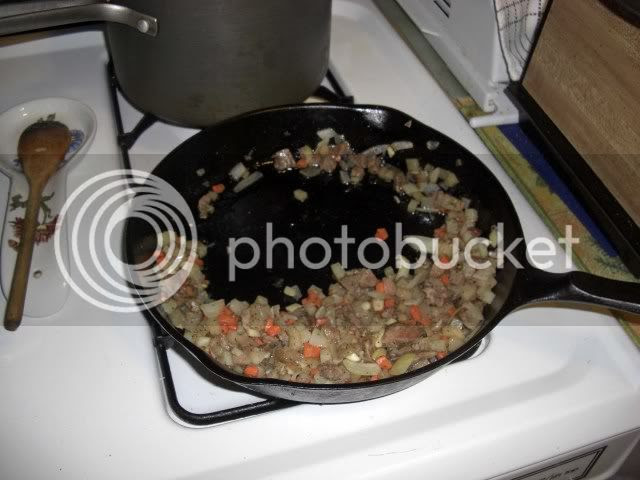 The rest went into the refrigerator and I will have it for breakfast tomorrow with an egg or two. 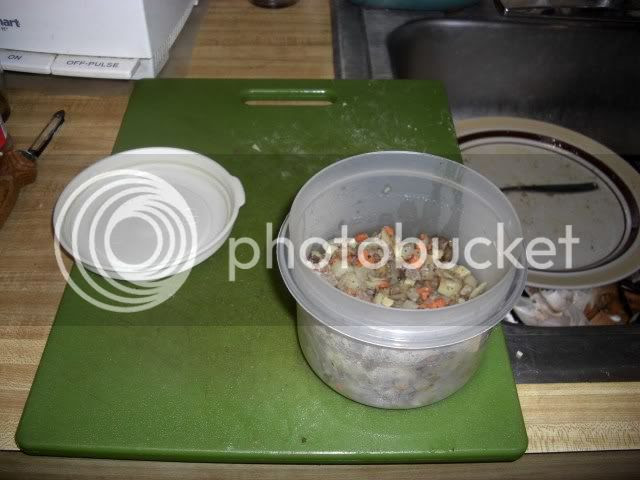 I wasn't all that hungry at dinner time. Maybe my lunch had something do do with it. A bowl of leftover chili was plenty. 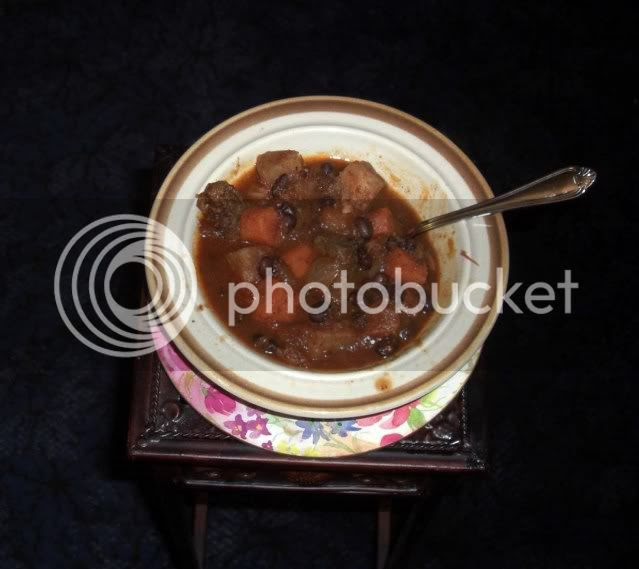 Well, after spending my 77 cents today my grand total for the month is now $138.57. And, for the life of me, I can't think of anything more to spend it on. Not if I want to finish up some more of what I have left. If I was going to carry this forward I would probably start to stock my spice cabinet. But because I already have a fully stocked one, it would be pointless for me to actually do that. I will give you a few more of my thoughts on living on a food-stamp diet when I am actually finished, but I think you can see that it is certainly possible to eat well on this amount of money.

I had to kind of laugh at the guy from CNN who complained that he started to run out of energy towards the end of the month and he thought it was because he wasn't getting enough protein in his diet. I should go back and see how the hell he spent his money, because a lack of protein certainly wasn't my problem. I probably ate more meat this month than I usually do.
Posted by Bar Man at 7:14 PM

Long time lurker - I have really enjoyed reading about your experiement - it seems to me that you had more than enough food, especially protein.

Glad you are enjoying my blog and my month of deprivation. Only kidding about the deprivation, obviously.

Thanks for dropping me the note.