Bar Man is not the neatest cook in the world, as the Mysterious Chinese Woman has remarked on many an occasion. 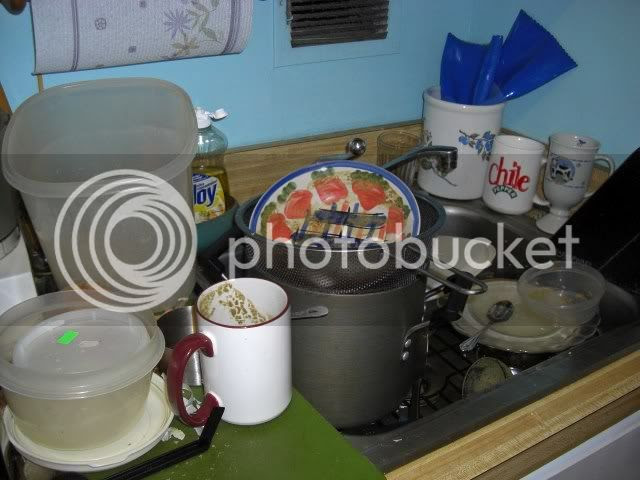 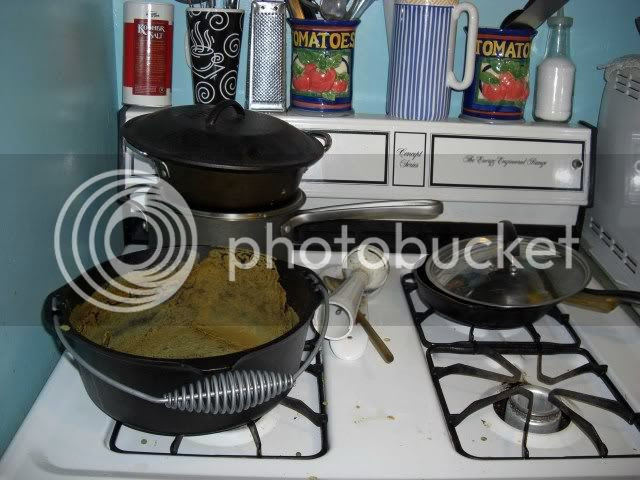 Oh well, that mess could wait until after breakfast. I felt like a bit of a change from the usual oatmeal so I just thawed out some spinach and threw it into my little frying pan with some olive oil, chopped up garlic, a bit of cheese, and an egg.

A Lazy Man's Omelet In The Making 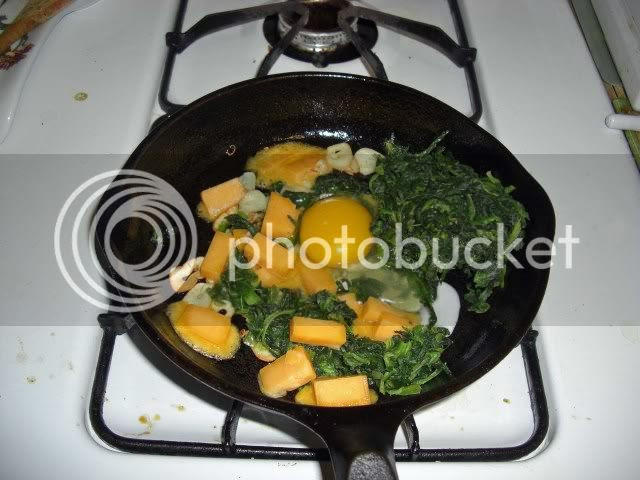 Then I scrambled the whole mess together. 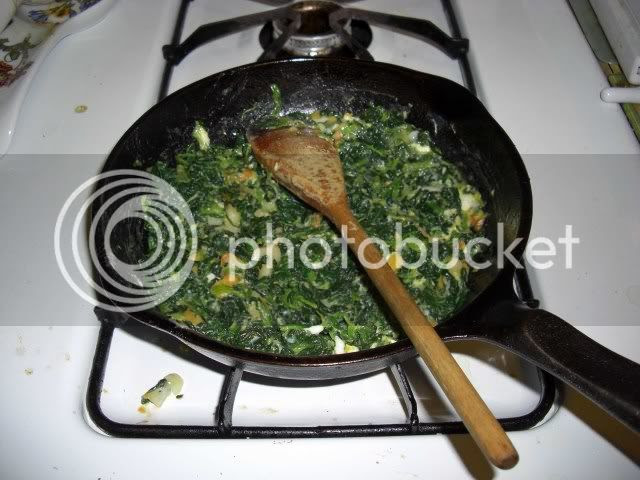 When it was done I just threw it onto a plate and had my mostly green breakfast. 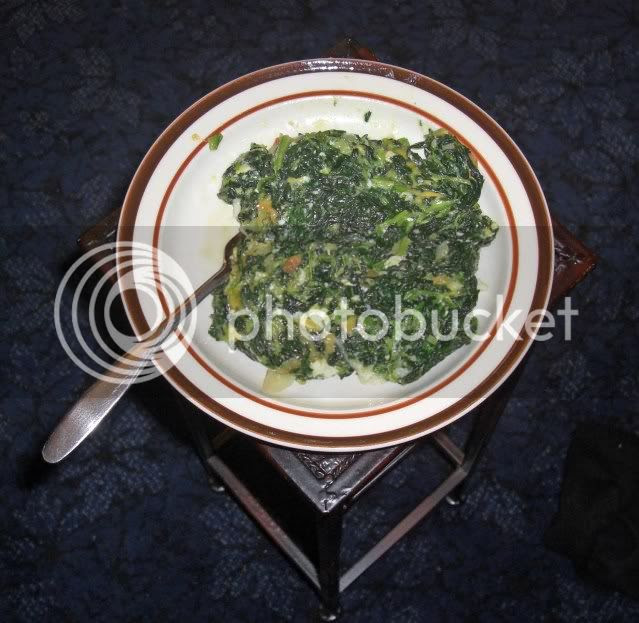 I finished the meal off with a grapefruit to ward of scurvy. I have to be careful now that I am not drinking any margaritas this month. They are my usual ounce, well, more like six ounces, of prevention.

Oh, and I did clean up the kitchen. 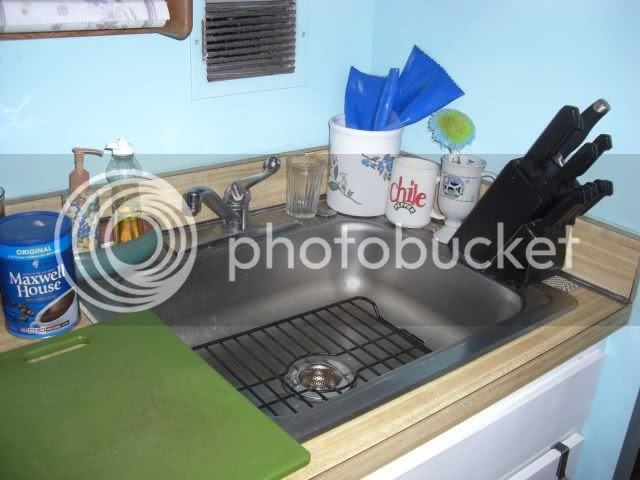 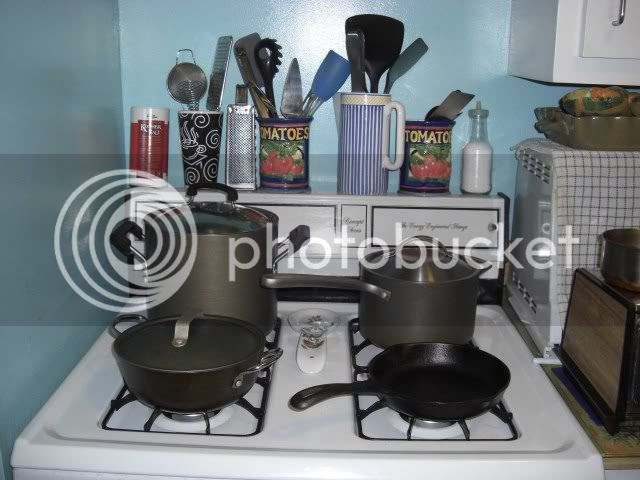 Lunch was a no-brainer, I just stuck one of those containers of pea soup into the trusty microwave and when it was steaming plopped it into a bowl. 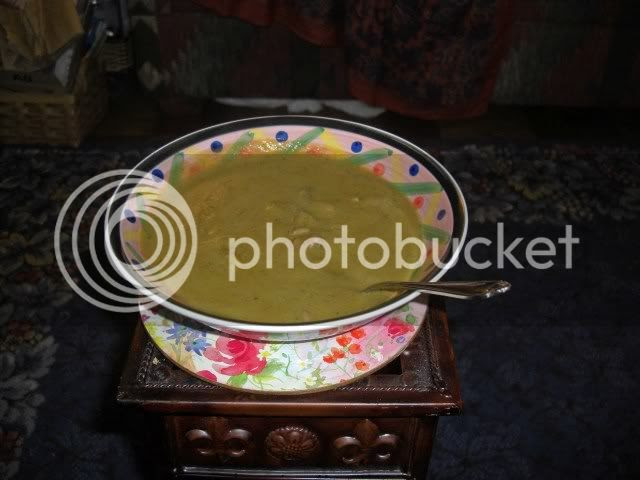 I had a chicken leg and thigh thawing in the refrigerator for my dinner so I had to figure out what I wanted to do with it. 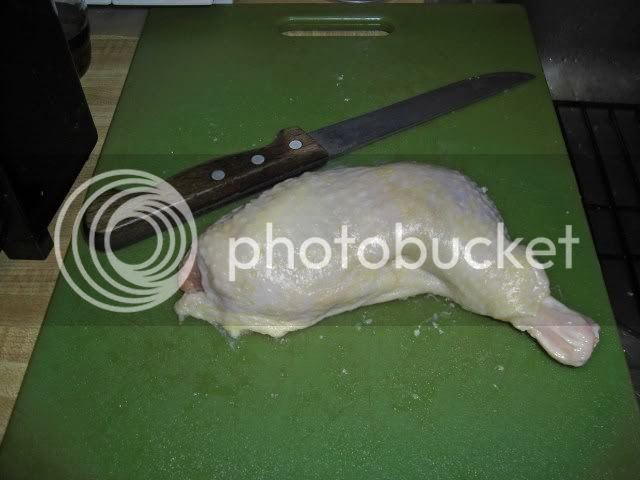 I decided to skin it, for a change. Usually I prefer to cook my chicken with the skin on because I think it enhances the flavor. I am not sure why I decided to remove it this time.

Naked As A Jay Bird 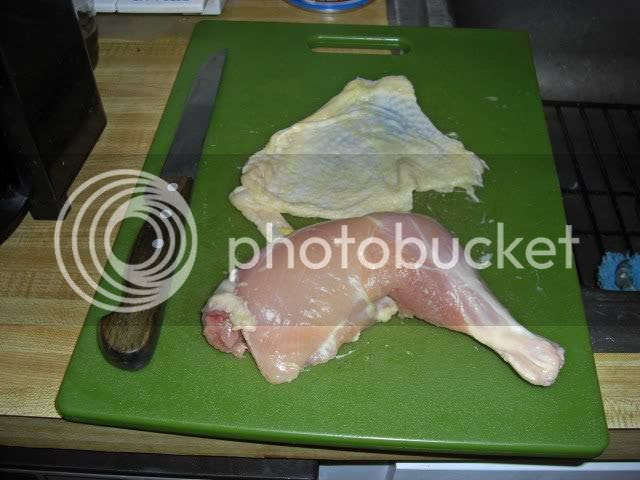 Garlic and ginger are always a good combination for chicken, particularly when I am working with a very limited spice palate. 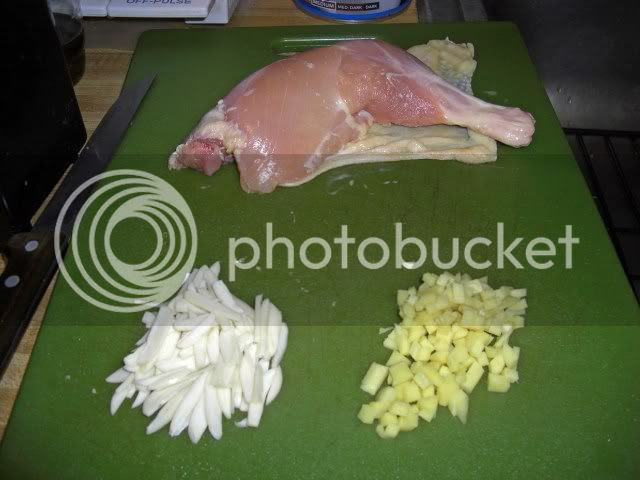 I needed it more than minced though so I stuck it into a spice grinder with some olive oil and gave it a whirl. Then I put it into a mortar with some salt and pepper and had at it for awhile. 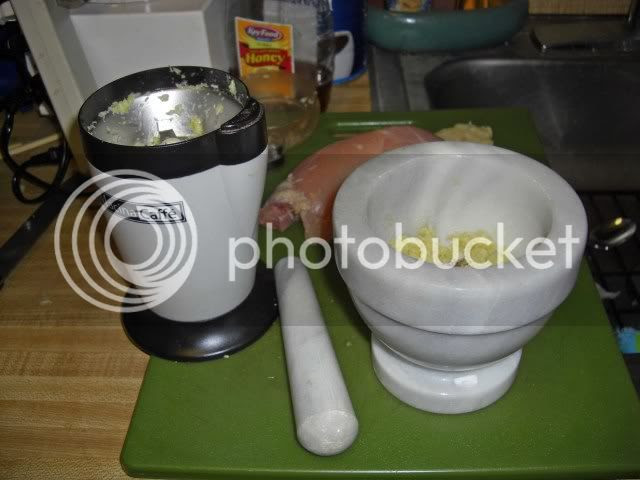 Next I spread the paste all over the bird and then wrapped it up in plastic wrap to let it fester for awhile.

A Leg And Thigh Spread 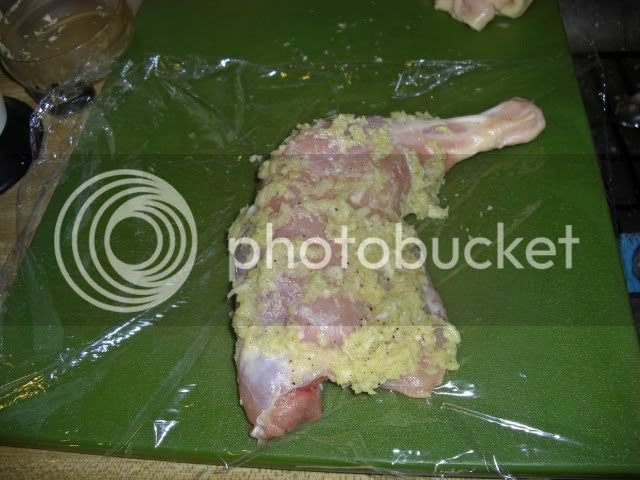 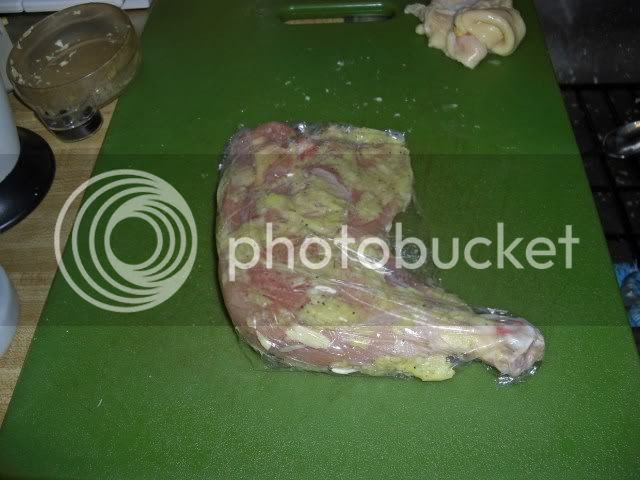 I wasn't going to let the chicken skin just go to waste, though. I plopped it into my trusty frying pan and then put it on a low heat until the fat started to melt.

Nothing Goes To Waste 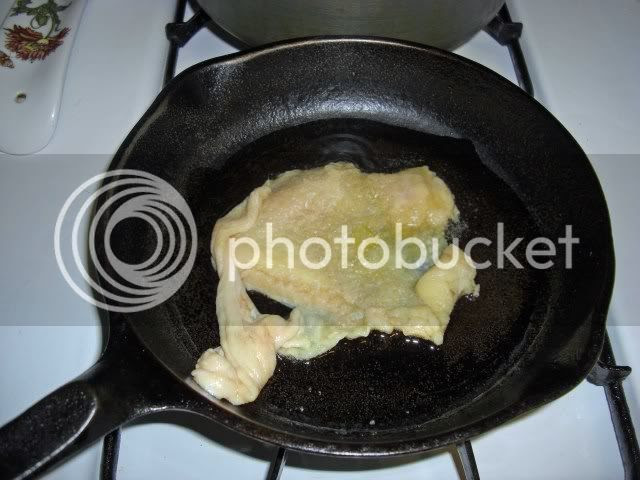 Then I turned up the heat and crisped it up.

Eat Your Heart Out, Mr. Lector 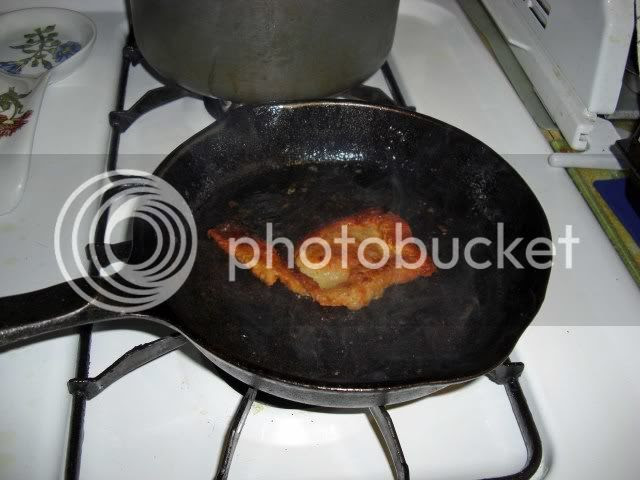 For the pasta sauce I just chopped up some onion and garlic and sauteed it in the melted chicken fat until the translucency set in. 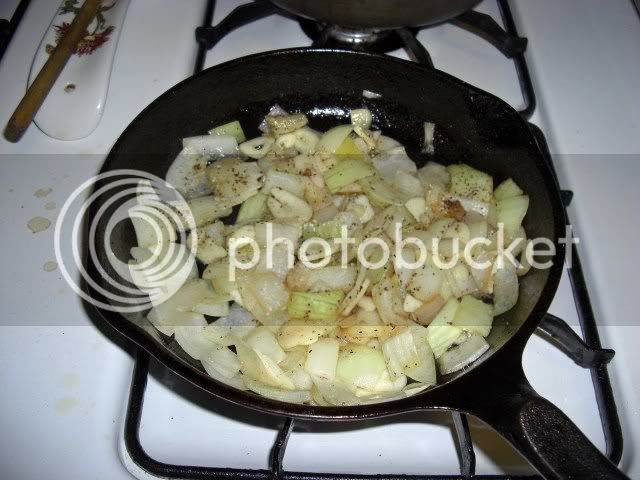 I threw the onions and garlic into half a can of crushed tomatoes and let it simmer while I threw the chicken into the frying pan. The sauce was a little on the thick side so I added two small ladles of pork stock. Then I made the pasta and when it was all over and done with I had my Italian dinner, minus the red wine that I would usually have. Oh, and I crumbled up the fried chicken skin and sprinkled it over the top of the pasta in lieu of Parmesan cheese. Not quite the same, but it was tasty.

I Wish I Had A Bottle Of Red 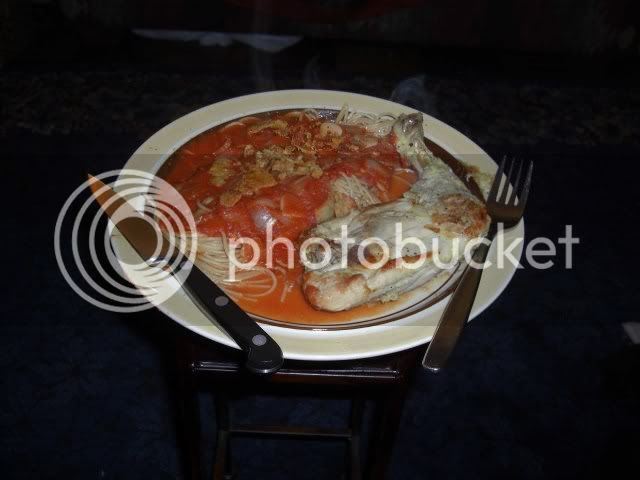 Giving up alcohol hasn't been hard, but there are times like tonight when I miss it as an accompaniment to my meal. I also miss popping into Pete's for a brew or two, but, we all have to make sacrifices for our art. I wonder if that guy on CNN who blogged about eating on a food stamp budget gave up drinking. I don't think he ever really said.

I had another couple of bones to throw into my bone bag and plenty of pasta left over to do something with tomorrow.

Lots Of Left Over Pasta 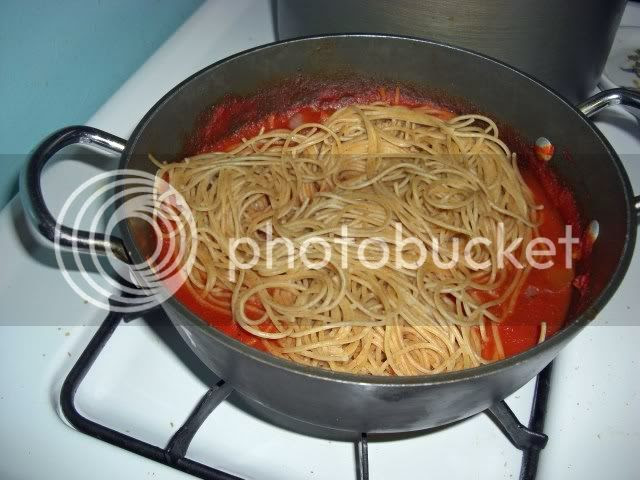 If I was going to continue on this regimen I would definitely have to start building up my spice inventory. The pasta without any oregano or other herbs is a bit on the bland side. It is kind of a tease to know that I actually have all kinds of spices in my kitchen, but can't use them because I didn't buy them on this budget. I usually go through at least one jar of chili garlic sauce a month and a fair amount of soy sauce as well. Plus I brought home a couple of big jars of chipotles in adobe sauce from Mexico, and they have been calling to me. The chicken I cooked tonight wasn't too bad, although a bit bland. In the future I will leave the skin on the bird where it belongs.
Posted by Bar Man at 7:37 PM