Another Shopping Day And Making Stock

I got up this morning looking forward to another breakfast of my pork shoulder hash. Decided to perk it up a bit with an egg so I plopped the leftovers into my frying pan and made it into a donut shape. 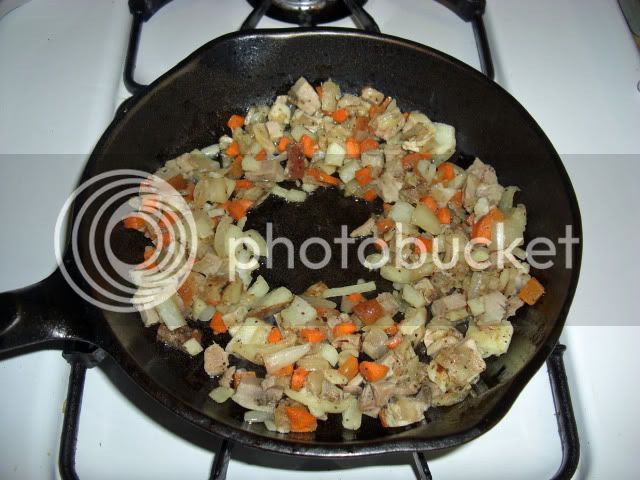 Then I plopped an egg into the middle.

Here's Looking At You 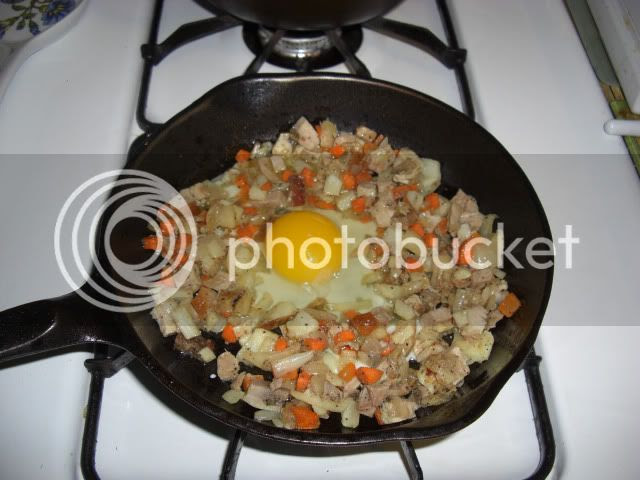 Next, I put a cover over the pan and left it for a couple of minutes. Just long enough for the top of the yolk to turn a bit pink from the steam. 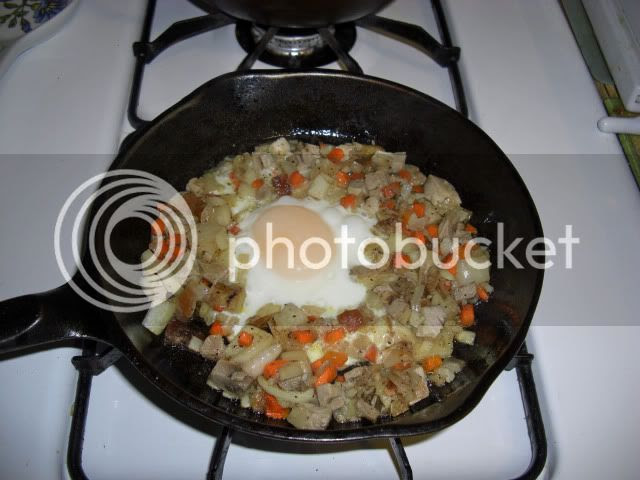 I tried to preserve the integrity of the hash and egg when I plated it, but wasn't adroit enough. It all kind of fell apart so I just mixed it altogether. 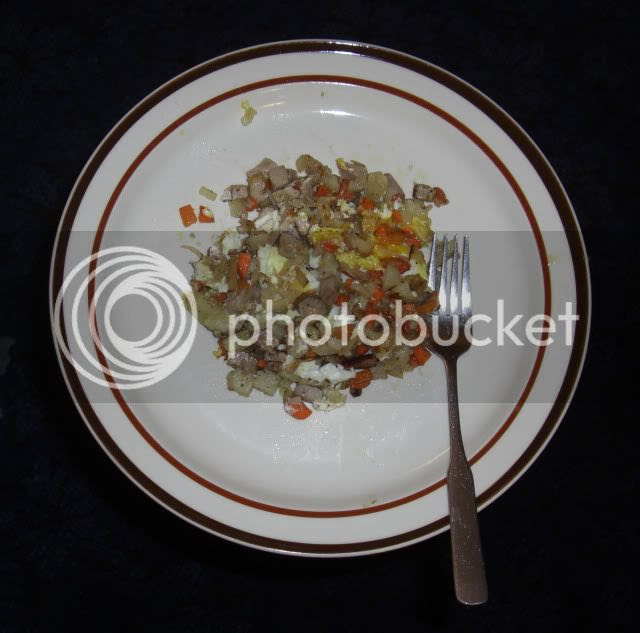 When I order corned beef hash in a diner, and it usually comes out of a can, I ask for it with poached eggs on top. I stir them into the hash, too.

It was time to replenish some of my staples so I headed first to Trader Joe's where I picked up 8 bananas for 19 cents each or $1.79 total. I also bought another jar of their peanut butter, crunchy this time, for $1.52 for 16 ounces. Hmm, I wonder why they label peanut butter as 16 ounces but something like meat would be a pound. Is peanut butter a liquid ounce? But, then, wouldn't it be a pint? So many quesitons.

Next I headed to Key Food where I picked up a bag of onions for $1.99, another five heads of garlic for $1.29, and a bag of green peas, also the mysterious 16 ounces but with 1 pound in parenthesis, and 454 grams also listed. All bases were covered with the peas. The big score was three cans of Centro crushed tomatoes at $1.25 per 28 ounce can and one can of Centro tomato puree, also $1.25. I was going to buy chili powder but they only had a small jar of McCormick's for $1.79, which I thought was too expensive. I will check Trader Joe's and Met tomorrow to see if I can get it cheaper. If not, well I guess I can spring for $1.79 because it will net me at least three meals of chili with the other ingredients that I already have.

My shopping for the day came to $13.35 and my total for the month is now $112.97. After the chili powder, though, I shouldn't have to do any more shopping for at least a week. If that holds true, and my chili powder does come to $1.79, I will have about $60 for the last ten days of the month, well within my budget.

For lunch I finished off the last of my creamy style Trader Joe's peanut butter and then spread the new crunchy stuff on the other piece of toast. I think I like the crunchy better, and it is the same price. 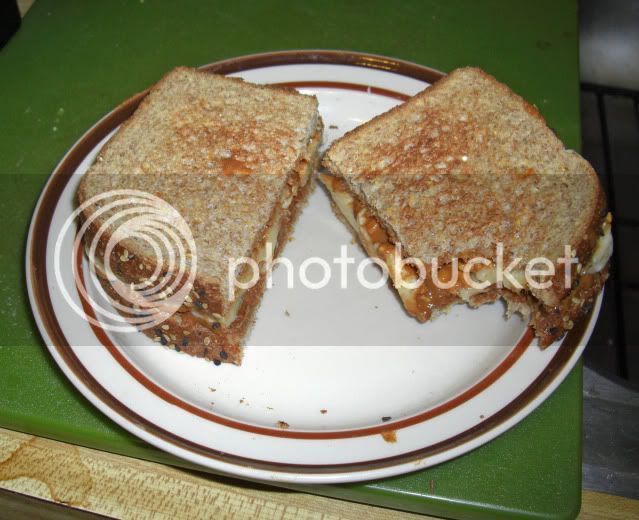 As I was making the sandwich I couldn't help but notice that the label on the peanut butter also stated that it was 1 pound, in parenthesis, and also was 454 grams. So just ignore my earlier musings about ounces, pints, and pounds.

I figured it was about time to so something with the rest of my pork shoulder before it started to get a bit funky. Naturally, I used the bone to make some stock. But first I trimmed of the considerable amount of meat that was still hanging on the bone.

What I Had Left 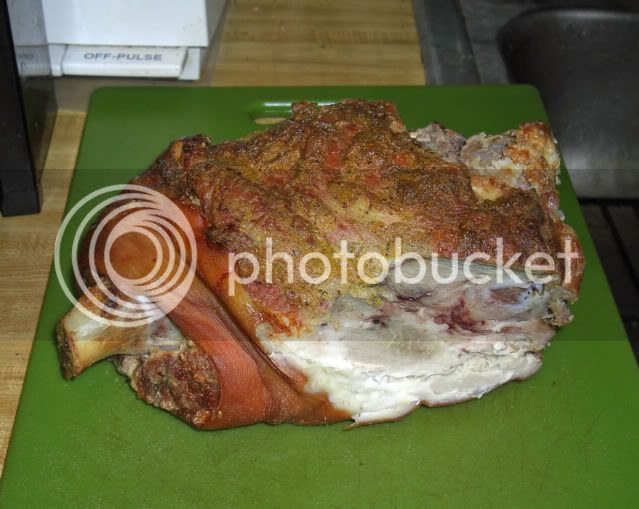 After The Trim Job 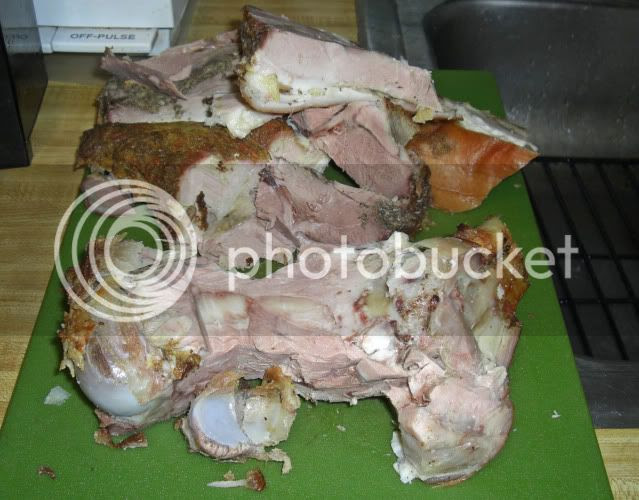 I threw the bone into a pot and added two chopped up carrots, two chopped up onions, about half a dozen cloves of garlic, about a tablespoon of salt, and about a teaspoon of pepper.

Ready For Its Bath 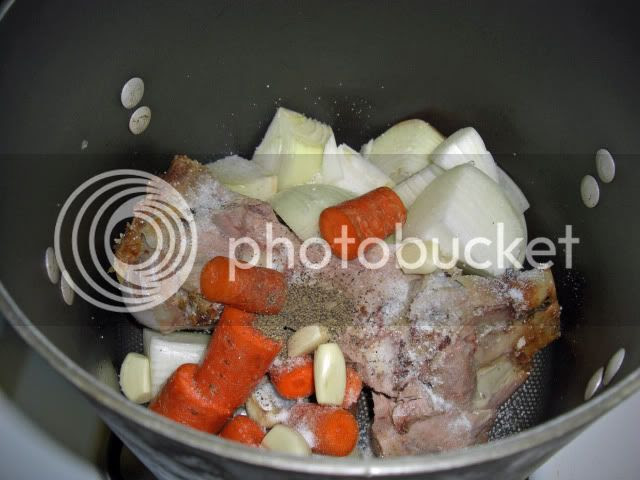 I added the water almost to the top and will then bring it to a boil, turn down the heat, and let it simmer for a couple of hours.

Your Bath Is Drawn 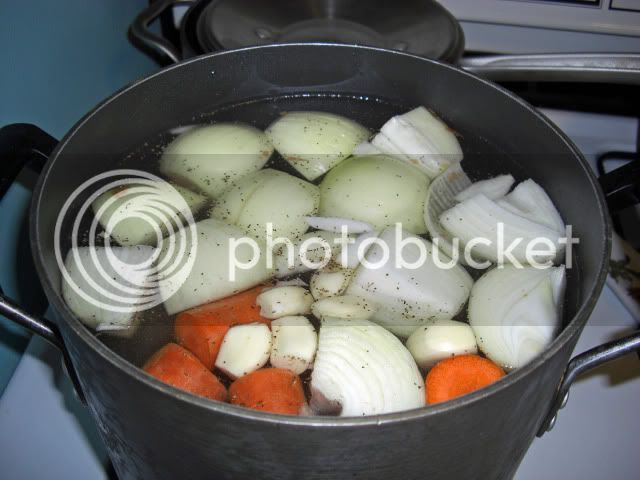 As you can see, I had plenty of meat left after I trimmed it off the bone.

Meat, More Meat Than I Could Imagine 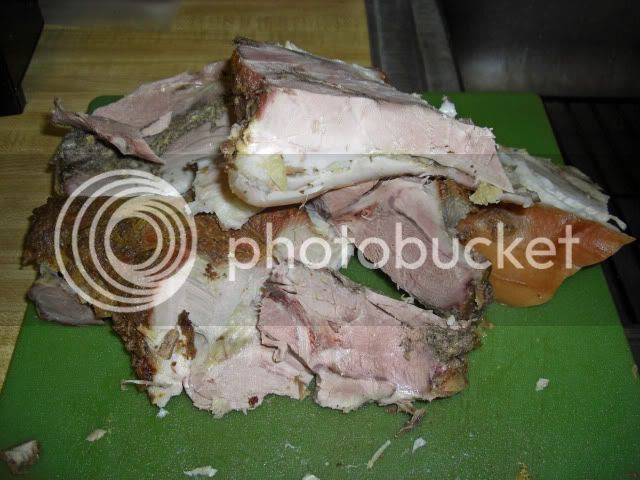 I set one chunk aside for tonight's dinner. 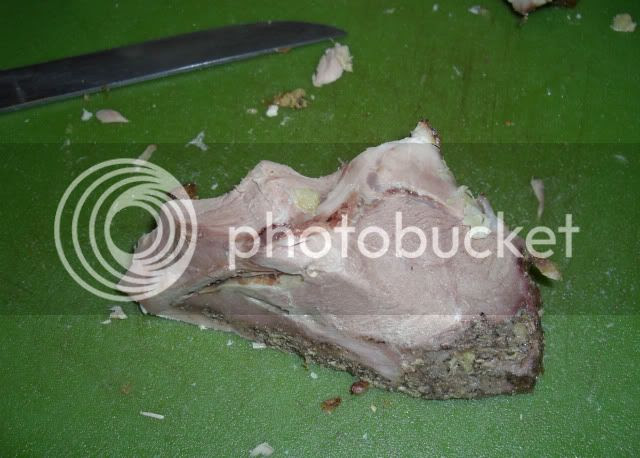 I chunked up another bunch to use in my pea soup, which I will make tomorrow. In addition to chili powder I will have to buy some milk tomorrow. I forgot that the pea soup needs milk.

Meat For My Pea Soup 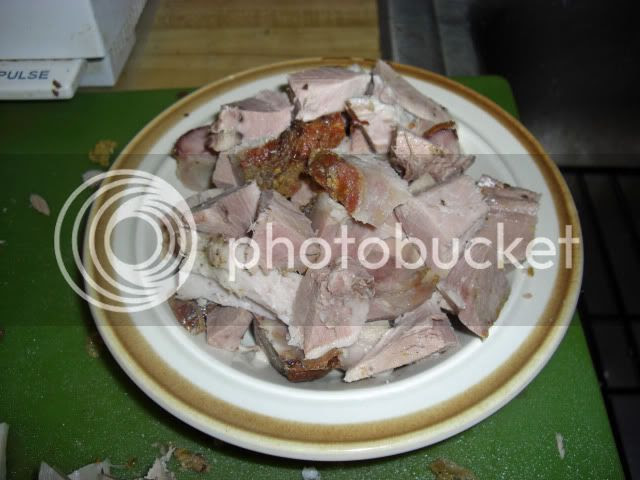 I also sliced up a bunch of pork that I put in three separate bags to stick in the freezer. Each of these will make either a hearty sandwich for lunch or provide the meat for a dinner, perhaps with rice and beans accompanying it.

Destined For The Freezer 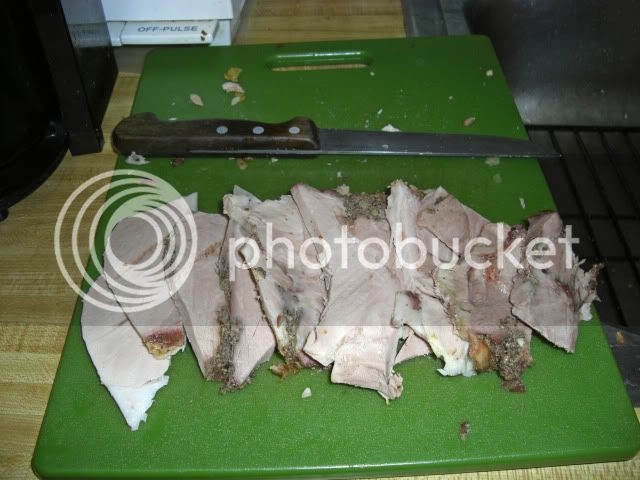 I now find myself in the position of having more meat than I will probably be able to eat during the rest of the month. I have five large beef steaks, each good for two meals, unless I use one of them in chili. I still have two chicken legs and thighs left over. I've got a good chunk of beef roast to cook, and that has got to be worth at least three or four meals. Then I have tonight's chunk of pork, enough pork left for several days worth of pea soup, and three days worth of sandwiches or dinner with rice and beans. That is at least twenty-one days worth of meals, by my reckoning, and I only have nineteen days left to go, counting tonight's dinner. And I didn't have to resort to hamburger, either.

Dinner tonight was a relatively simple affair, and given the length of today's post so far, I am sure everyone is heaving a sigh of relief.

Sweet potato was on the menu, but I wanted to kick it up a notch so some garlic and ginger was in order. Everything diced up or cubed and ready for the microwave.

Well, Just About Ready, That Is 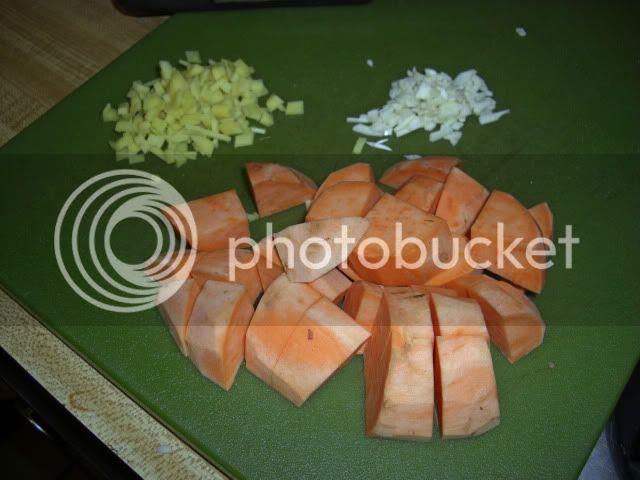 Sweet potatoes, despite their name, are not really all that sweet. I decided to add a banana to the mix to sweeten them up a bit.

Now It Is Ready 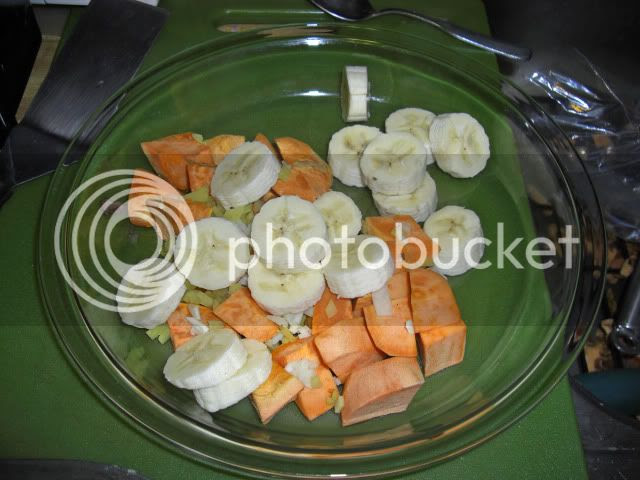 I stuck the whole thing in the microwave for about ten minutes and, while everything was being bombarded with whatever they are bombarded with to excite their little neutrons, or whatever, I fried up some onions and threw in the leftover chunk of pork after I sliced it up. 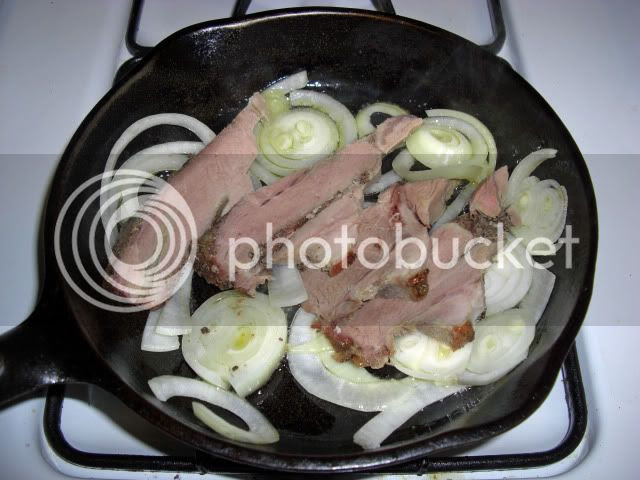 When the sweet potato and banana were microwaved to the proper softness I threw in a few raisins and mashed it all together. Then I put everything on a plate and my dinner was ready. 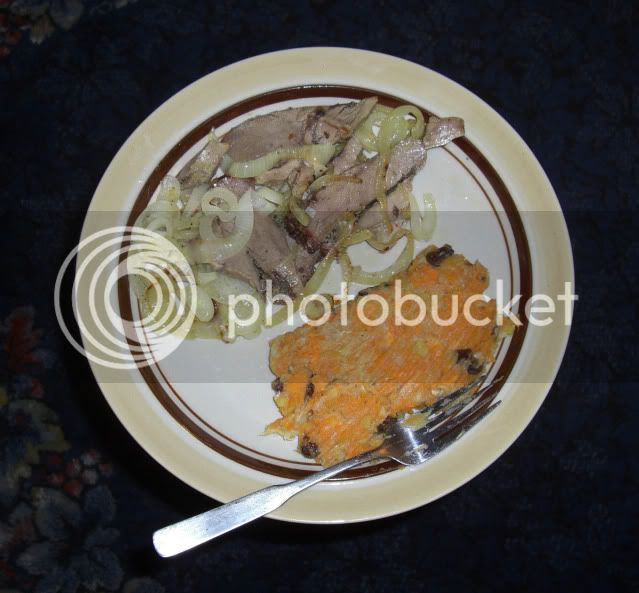 This was the first time I tried the sweet potato and banana trick, but it turned out pretty well. The two make an interesting combination and the ginger and garlic complimented it nicely. The raisins weren't bad either. I saved half of the sweet potato/banana combo and will do something with it tomorrow. I am actually thinking it wouldn't make a bad sandwich. I kind of wonder how it would go with peanut butter.
Posted by Bar Man at 9:35 AM