Now that Rudy is no longer running for president and, perhaps, is wondering where it all went wrong, he should consider this. You can't expect people to believe, as he so often said, that he is America's Mayor when he once, famously, suggested that New York's motto should be:

"We Can Kick Your City's Ass."

Has anyone ever mentioned that Rudy can be, shall we say, a bit divisive.

And then the New York Daily News ran Rudy's slogan on their front page and also distributed pins touting the same slogan: 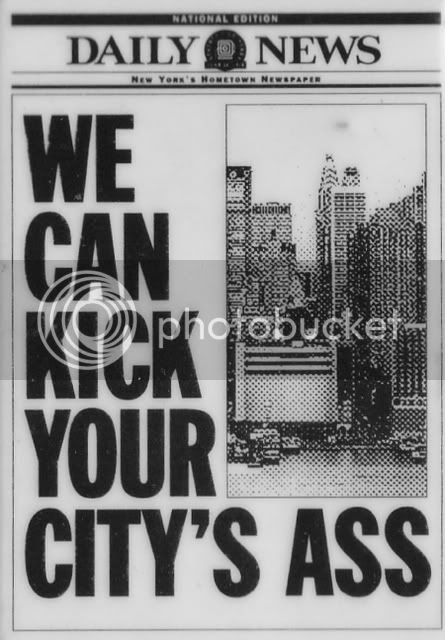 It looks like at least some cities decided to kick back a bit.

Of course the New York Daily News also seems to be in a bit of denial about how people react to New Yorker's attitude at times. When Iowa Senator Grassley suggested that maybe Rudy's New York attitude cost him votes they referred to him as Senator Hick. Hmm, now that was witty, and only seemed to reinforce Senator Grassley's point.
Posted by Bar Man at 9:28 AM