West Of The Pecos, Or At Least West Of Park

I decided to head up to Central Park today, given that it was yet another gorgeous fall day here in New York. I didn’t actually go I the park though, just stood at the southern edge where they park the horse carriages and gazed into it. Always a lovely sight. I wood have liked to have gone into The Plaza for a drink but it is being remodeled so that was out of the question. Instead I just wandered a few blocks until I got to: 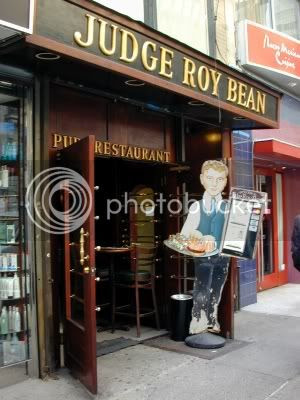 Now I hope most of you know that Judge Roy Bean referred to himself as “The Law West Of The Pecos” and presided over a courtroom in his bar, the Jersey Lilly, named in honor of Lillie Langtry, a British actress (who was known as Jersey Lilly having been born in Jersey, England) with whom Mr. Bean was apparently smitten, but never met. Interestingly, the Jersey Lilly was located in Langtry, Texas and, not unexpectedly, people assume that Judge Roy Bean also named the town after Ms. Langtry. Not so, however. The town, such that it was, existed before the arrival of the Hangin’ Judge and had been renamed from Eagle Nest to Langtry after a railroad boss, George Langry, from the Southern Pacific who was in charge of running the railroad's tracks through it. Lillie Langtry did actually visit the town once, but it was after the good Judge’s death (he died peacefully in his sleep after a night of heavy drinking).

Well, that was a bit of a digression. This bar is located at 39 West 56th Street between 5th and 6th Avenues and is, in fact, just west of Park Avenue. It is a bit of an oasis of tranquility on this bustling street even though it was bustling a bit inside. Despite the Western themed name it is just another Irish bar in a city with a thousand of them. The old, somewhat beat-up wooden bar is set back a bit from the door. Between the door and the bar is a wide entryway that is wood paneled with large mirrors on the walls. There are ledges underneath the mirrors for drinks on the side with only bar stools and for elbows on the side that has little tables and chairs in front of it.

The bar has no foot rest or rail. The bar chairs are dark brown wood with dark green vinyl seats. There are two beer stations, each with four spigots. One is an old brass tube affair and the other is newer and silver. An old Wildwood Hard Cider brass spigot also sits on the bar but it is defunct.

The bar back is kind of plain with arched set back shelves in front of mirrors. Actually, the shelves aren’t arched, that would be silly, the bottles would slide off. The shelves sit under arches. There are plain metal coolers underneath and one ice chest filled with bottled beer. A couple of old chandelier like light fixtures with multiple upturned glass lamp shades hang over the bar. The ceiling is heavily beamed and the spaces between the beams are painted with leaves.

Opposite the bar there is about three feet of light and dark green marble like tiles with dark mirrors above them that run to the ceiling. Mounted on the mirrors are lights that look a bit like truncated ice-cream cones made out of white glass. There is a round illuminated Bass Pale Ale sign and a Stella Artois mirror but not too much else in the way of decorations.

I had a Sierra Nevada Celebration Ale. 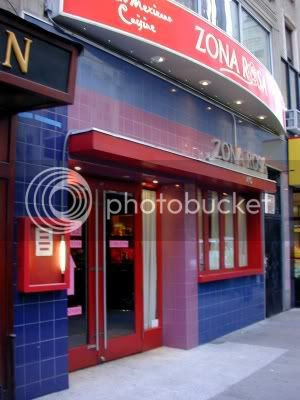 Keeping with the TexMex theme I just walked next door to this Mexican restaurant that has a bar up front. Not a large bar, just seven bar chairs. But the bar chairs were comfortable bucket seat like things in dark and light tan vinyl and the spun around. The had a ring for your feet which was good because this bar didn’t have any place for them. The bar had a light wood top made up of various sized wood planks and wood paneled sides.

The bar back is a combination of wood that matches the bar top and small, reddish orange tiles. Just two levels of shelves, but they are deep so they hold three rows of liquor each, mostly tequila. In the middle of the bottom shelf is a small metal sink that give it kind of a kitchen-like look. A kitchen like Bar Man would want. The wall at each end of the shelves is yellow tile. The floor in the bar area is distressed gray and yellow. There is a good sized dining area in the back with mirrors and wood paneling that matched the floors. On one side the walls were kind of a rounded and padded tan and maroon. This area is set off from the bar by a curved section of yellow tiles topped by mauve poles.

I had a Patron Margarita, up with a salted rim. 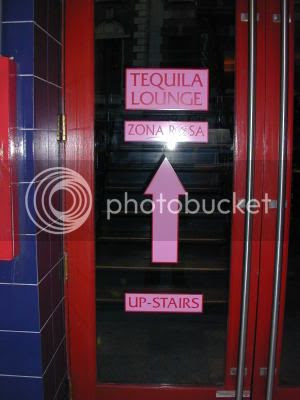 This place is right upstairs to Zona Rosa but has a much larger bar and appears to be much more spacious. The bar is similarly configured to the one downstairs. The bar chairs were also the same but this bar did have a wooden foot rest. There is even more tequila up here with one shelf running beyond the bar and into the next room where tables and chairs were set up for dining. There is a wide window next to the bar overlooking the street. It had white curtains that were pulled back and elongated bare bulbs with the filaments glowing orange hung from the ceiling on black cords. There is a wide ledge in front of the window with small oil lamps, cacti, pumpkins and gourds, and a large tequila bottle sitting on top. There are also chairs in front of it.

They have the same type of flooring up here, both the tiles by the bar and the wood flooring in the back and in the front the walls are tiled the same. More tiles up here though because it is a larger space. When you get too much of this type of tile it always tends to convey a bit of the feel of a subway station or a public restroom. I was the only customer so probably when it gets crowded the ambience changes a bit.

In the back the walls were covered with nice dark mauve or light purple, take your pick, wall paper with white geometric shaped flowers with black leaves. The ceiling was lemon yellow with a pale green overhang separated from the top by a band of orange. In the back the ceiling looked like a pale green as well with large recessed circles of orange. The chairs in the back were plush white and surrounded the small tables. There was enough floor space to suggest dancing later on. I think they were setting up for a private party.

I had another Patron Margarita, up with a salted rim, and then headed on home.

Hello, Your blog is awesome but I was looking for tiffany floor lamp so I guess im on my way searching some more. Thanks for the great info.

I really liked of your site. I love finding sites and blogs that have interesting content. If you have time please visit mine at bar stools