I looked at my most recent Murphs’s email and saw a reference to The Upper Deck on 53rd between 1st and 2nd so I headed on over. Now this was billed as a sports bar so I just assumed that it would be open during the day, but no. Here we go again, why can’t the hours of operation be given when a bar is mentioned in Murph’s, or anywhere else, for that matter. Just so you know, on weekdays, at least, The Upper Deck doesn’t open until 6:00 P.M. 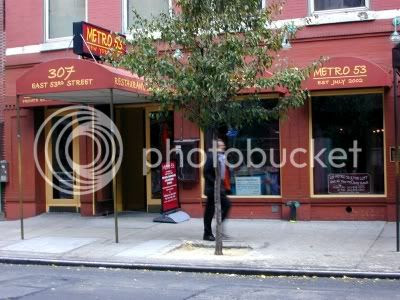 Well, at least this place that was right next door was open. It is a very nice bar and I met the owners, Mike and Tony, who also own The Upper Deck. They were a couple of gregarious Irishmen (aren’t they all) and were really fun to talk to. They made sure that I would return and visit The Upper Deck one day when it was open, and I will be sure to do so. They introduced themselves when they saw me taking a picture of Denise, the bartender, and said the recognized me from a newspaper article. Denise thought she had met me before but I hadn’t been in here yet and she said she didn’t work anywhere else. A case of mistaken identity, I guess, or else it was a variation of that old "Haven't I seen you someplace before" line. 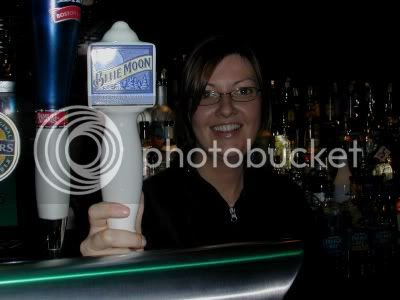 Metro 53 is quite a large place with a large, three-sided bar. The bar has a grayish marble top with black and gold flecks and a wooden arm rest. The front of the bar is wood with wide silvery metal bands at the top and bottom. There is a foot rest and wooden chairs with black vinyl seats. Two beer stations sit on the bar, one an inverted flat-bottomed U shaped affair with eight spigots and the other is an upright round one with four spigots. Blue spotlights in the ceiling illuminate the bar.

The bar back is wood shelving and mirrors. There are tiered shelves for liquor in front of the mirrors on my side and liquor and glasses on the wood shelves as well. Lots of metal ice chests. There are two televisions behind the bar, one on the wall opposite the bar and at least three more in the other room.

Opposite the bar is a wooden ledge above a red painted wall that is a washed pale yellow above the ledge. Black and white photos of old New York decorate the walls along with an Art Deco poster for New York Central System that featuring locomotives. There is a large dining area with tables, chairs, and comfortable looking leather banquettes against the wall. I enjoyed myself in here and I suspect you would as well.

I had a draft Magner’s Hard Cider. 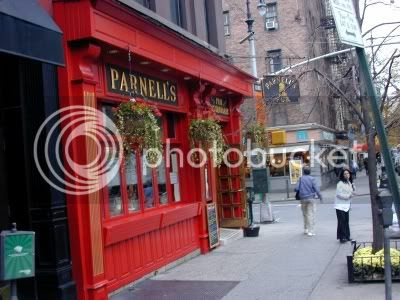 This is a dark Irish bar on the corner of 53rd and 1st that has a touch of old-world elegance to it. A long dark wooden bar with a ledge for your feet and wooden bar chairs that had bright red vinyl seats. There are three tubular brass beer stations protruding from the bar with a total of eight working spigots and a spot where another could be added. Three large mirrors separated by wood shelves are behind the bar. Tiered shelves of liquor sit in front of mirrors at each end and a silver cash registers sits in front of the middle one under a clock. Coolers with brown doors sit below the shelves. A row of orange helmet shaped lights hang immediately behind the bar chairs and lots of lights with stained glass shades with various designs hang throughout the rest of the place.

Opposite the bar is a wood partition with a stained glass set of panels on top and a brass rail on top of them. Small tables with bar chairs line the side of the partition closest to the bar. The wall on the other side is brick and covered with framed racing and hunting paintings. Along the top of the brick wall is a shelf covered with urns, statues, mugs, a cannon, and other assorted knick-knacks. All kinds of mugs and pitchers hang from the tan patterned ceiling towards the back. A ledge in front of the windows are covered with small pumpkins, gourds, and branches with fall colored leaves. Pitchers hang above the window.

There are tables on the other side of the partition, up front by the windows, and in the decent sized dining room in the back. Lots of dark wood paneling and all kinds of shelves with interesting stuff sitting on them. The bathrooms are on either side of a cloak room that is built out from a wall and this structure has stained glass windows. There is a definite look of an authentic Irish pub. The crowd in here was a bit older than usual but everyone seemed like they knew each other and they were all having a great time.

I had a draft Pilsner Urquel.

Parnell's is a good bar. Did you talk to Owen? He's as Oirish as they come as a bartender!

I don't know who was tending bar while I was there, but everyone appeared to be Irish.