No bars today but one hell of a party. It has become a tradition that the last home Jets game before Thanksgiving our tailgate group has a Thanksgiving themed affair. This year was no exception.

Bernie, Bar Man, Bob, and Loretta With The Bird 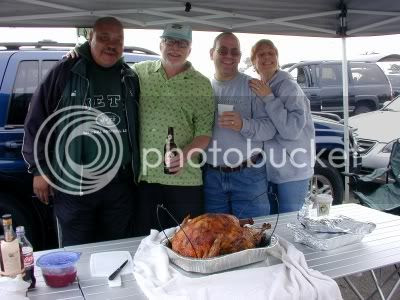 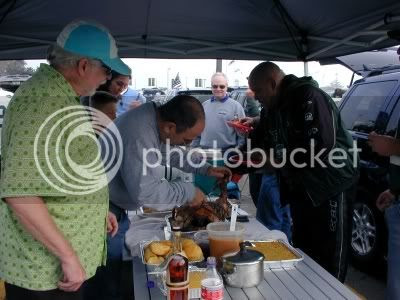 Bar Man Gets His Reward 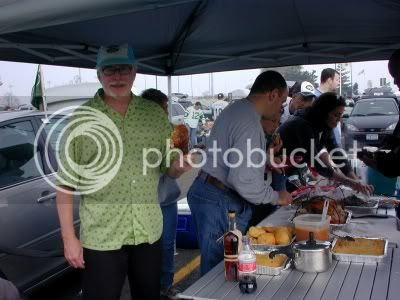 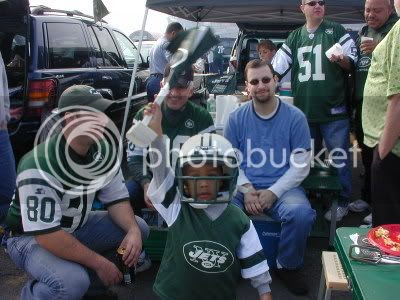 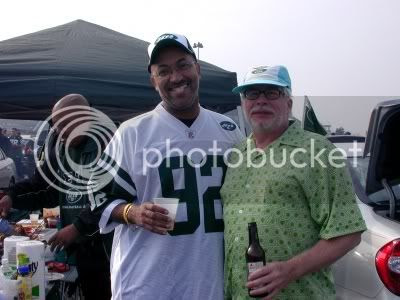 By the way, congratulations to James, the baseball team that he coaches and that his other son, Jordan, plays on won the Championship of the Dumont, New Jersey Baseball League in the 9 and Under Division. He also brought sausages and peppers for after the game. 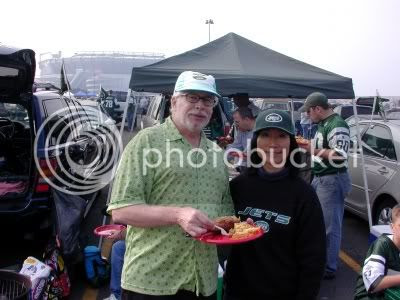 Ronnie bought the bourbon and marinated chicken breasts for the after the game party. 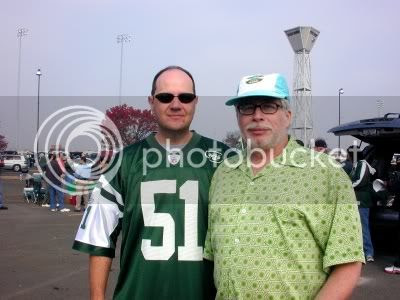 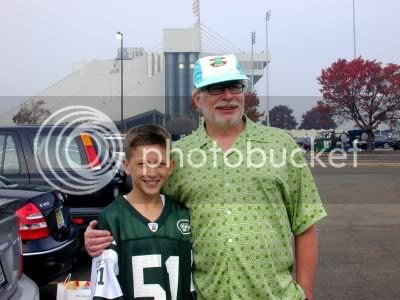 I can't remember what everyone else brought but the elder Steve's wife made delicious apple pie using apples grown in their back yard and Brian's wife made sausage bread. The sausage bread was also delicious, I don't know how she got it so crusty and crisp.

The Elder Steve (Center), Younger Steve Is To His Left and Brian Is On The Right. 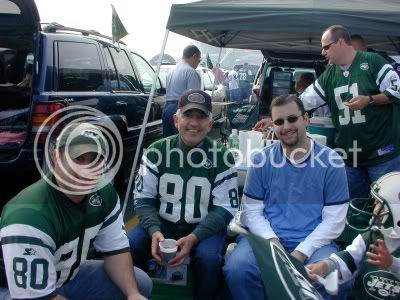 Bar Man Putting On His Game Face (And Attire) 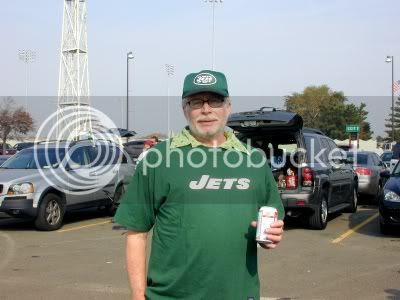 Yes, There Was A Game 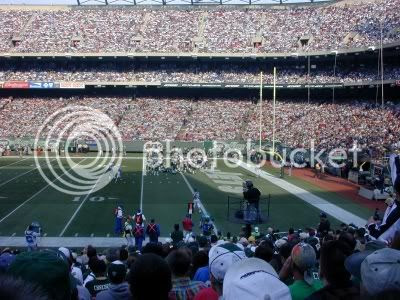 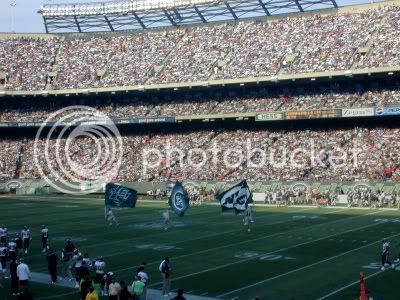 Well, we lost the game and it was a heartbreaking loss. Less than two minutes to play and the Jets had the ball 1st and Three on the Charger's goal line. But could we get it in, NOOO!!! Oh well, it was a lovely day with great company and fantastic food.
Posted by Bar Man at 10:32 PM

Reminds me of the going away party we had for a friend who was getting married, there is another name for this style of party but since we did not go to any artistic dance clubs I dont think we qualified for the name. We did go to a Tampa Bay game and another team...One of them lost. I left in a cab and my buddy who was getting married made sure my door was closed and he closed it on my fingers...real tight. I asked in a civil manner to open the door because my digits were in most likely a bad spot. The door was opened and for the life of me I do not know how I weathered this storm unharmed...Hmmm I just realized this is not my blog so now I have been taking up your space but fear not Bar Man (if you made it this far) posts this long are not read so my rambling is pretty harmless. Power sent to your travels and keep on with the crusade. JW

I have a cube game site. It pretty much covers ##KEYWORD## related stuff.

Come and check it out if you get time :-)

You realize how awful the Jets history is? They won 1 Super Bowl, in 1969. That was 49 years ago, and they havent played in one since. At 82 games under .500 they would have to go undefeated until Week 4 of 2023 to break even. Buddy Ryan will rise from the dead before that happens. Their career passing leader completed barely half his passes, a ludicrous percentage today. Their rushing touchdown leader was 52 touchdowns behind Walter Payton. Their winningest coach was 6 games UNDER .500. Mike Ditka was the Bears 2nd winningest coach and he won 29 more games then that plus he was 44 games OVER .500. The last Jets QB of any consequence was Ken O'Brien and he played 30 years ago. Just a long stretch of suck.