Boys and Girls, let this be a lesson, you are never too old to learn from your mistakes, unless, of course, you are the Bar Man who never seems to learn from his. First off, when meeting people from out of town at a bar you have already hit, do not start out by having “a few beers” just to warm up. Then, well, for yourself. 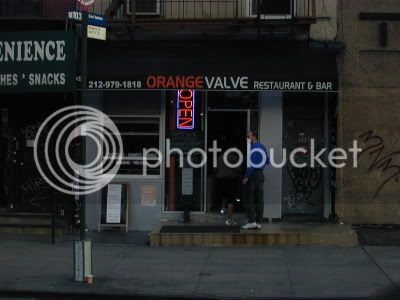 Well, the name was appropriate, because there was an orange valve handle on the door, but other than that nothing was quite as it seemed. It is on the Bowery and certainly looked like it should have been just another dive. Instead it was like walking into a bar in Tokyo. Other than the crew that I stumbled in with there were no other round-eyes in the place. Now, granted, my eyes weren’t exactly round at this point either. The semi-large screen at the end of the bar was tuned to a Japanese station showing some kind of fight to the death no holds barred ultimate fighting match. Makes professional wrestling look like hop-scotch. Between the rounds they switched to what looked like a match between two gamers playing Mortal Combat. The guy at the end of the bar playing some kind of a quick reflex video game of his own, and who ended up behind the bar, gave us the low-down on the screen action. It turns out this was some kind of a championship match and they were down to the final eight or something. The skinny guy who ended up winning went in as a heavy underdog and his entire training regime concentrated on throwing a two-inch punch, something that he seemed to do with devastating effect.

Anyway, there was a karaoke bar downstairs and periodically, like ants, a bunch of people would emerge, order drinks, and then head back down. I didn’t even want to pop my head in for a look. When I was a child I once saw a bunch of ants drag a caterpillar down into and ant hole and I had the horrifying image that this too could be my fate.

Well, as followers of this blog well know, I have a certain, shall we say, taste for sake so that is what I had. Not a shot, well, yes, a shot, but that was just on the side, you understand, but a glass. It seems like the crew I was with, Mike, Gary, Jose, and Sean, had a tradition of calling in a shot to a pal in San Diego (yes, they are chargers fans and I will probably run into them at the game tomorrow). So there is where the shot came in.

Bar Man And The Crew 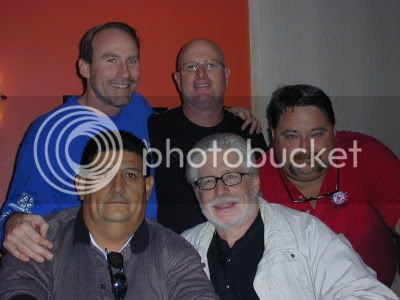 Anyway, all I can tell you is that the bar had a white top and the place was, basically, orange. If you like sake, or even if you don’t, and you find yourself on the Bowery looking for something a bit different, do drop in. 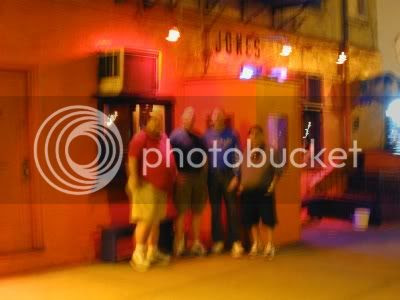 Well, the name is appropriate, it is on Great Jones Street, a short street that spans the distance between Bowery and Lafayette. It is a Cajun place, just a hole in the wall really, but has great food and dynamite Cajun martinis made with vodka they steep in their own peppers. Can’t really tell you much about this place because I was buzzed when I went in and more buzzed when I left. There are 45’s on the wall and, well, and…damned if I can remember. Suffice it to say that I had a few of the martinis and washed away the heat with a beer. The picture pretty much sums up how I was viewing things at the time.

To my credit I did walk with my new buddies to Nevada Smith’s where the were going to watch some kind of a sporting event and then I managed to weave my way to Cappucine’s where I met friends and they ever patient and oh so understanding Mysterious Chinese Woman (do you forgive me now) for dinner. Tomorrow is an all day tailgate party and Jets game. Woot, I can hardly wait. Can't count it as a bar but if I get pictures I will post them anyway.
Posted by Bar Man at 11:41 PM

What are your secrets to get this post listing higher while I searching for Play Station Game Wholesale on Google? It was very refreshing to read posts like yours by people from all around the world. I'm looking for Play Station Game Wholesale Resources and leaved this message thought that You may have this info on your country and want to share with us here. I visit again sometime :-)

Great blog you have here, I will definitely be back. I have a website that might be of interest to you. It has products at wholesale prices, great place to hang out.
wholesale distributor

Great job on your blog. I have just started blogging myself although I own another site bar stools and hope to build a blog around that. Hope I do as good a job of mine ;-)