I was feeling a bit lazy today so I just took the subway to Grand Central Station and hit a couple of bars close by on 42nd. The closest one were both classier than my usual fare so it made for a change of pace. 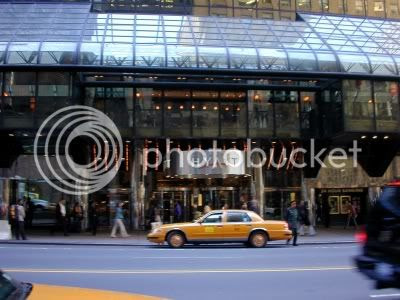 Kind of tucked away in the center of the Manhattan Sky restaurant on the mezzanine level of the Grand Hyatt is this more secluded than usual hotel bar. It has a wavy bar with a thick greenish brown marble top and a pea-soup green front and a thick silver foot rail. The black bar chairs have pale yellow seats and basket weave backs. Two silver T shaped beer stations sit on top of the bar and they each have four spigots. Little silver lidded bowls of snacks including wasabi dried peas sit on the bar as well. Bar Man loves these dried peas.

I asked the bartender if I could take a picture of the bar and he misunderstood and insisted on taking a picture of me instead. 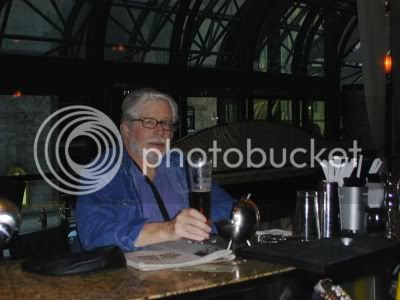 A shelf of marble that matches the bar sits behind it on top of coolers with metal doors. Above the shelf, in the center, is a fairly small television surrounded by an inordinately large wooden frame. Large ripple glass panels with red and yellow panels on the sides and bottom are on either side of the television. Glass shelves in front of these panels hold the liquor and glasses. Orange beehive shaped lights hang over the bar and small spotlights suspended on two wires illuminate the glass panels with the shelving.

A View From The Opposite Side Of The Rippled Glass Panels 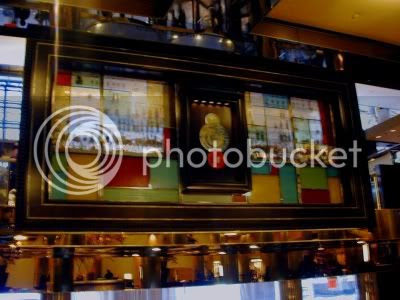 Opposite the bar are large floor to ceiling arched windows that let you look out upon the street below. A couple of tables and chairs sit next to the windows. They are separated from the bar by a curved divider with a marble top and a wavy-topped glass panel on top of that. Somehow I thought there should be a piano on the other side. There are two large shiny round columns with white drapes on either side of the bar area and these serve to separate it from the dining areas on either side.

I had a draft Brooklyn Lager served in a tall glass. 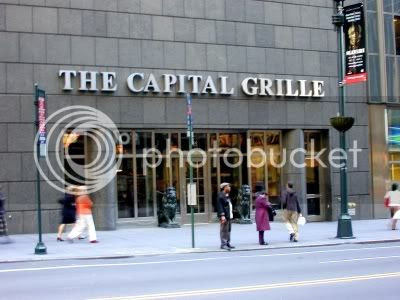 Just across the street on 42nd is another very elegant place with prices to match. Well, they weren’t too high, just strange. My Maker’s Mark Manhattan was $11.28 and when you added in the 94 cent tax it came to a grand total of $12.22. I guess the concept of rounding escapes them.

The bar here is also marble topped, but this time the marble is black with silver flecks. The front is black wood paneling and there is a thick silver foot rail. The wooden bar chairs have plush dessert rose seats and backs. Table lamps with black shades and twisted gold brass bases sit on the bar along with a large glass container with neatly sliced pineapple covered with vodka and a spigot on the bottom. The lady next to me was eating a pasta dish and commented on how good it was but she couldn’t have it with shrimp. I asked her if she was allergic and she said no, she was Jewish so she couldn’t eat shellfish. She wasn’t too happy when I said they probably just removed the shrimp before serving the pasta to her but it most likely was cooked with them. Bar Man was just trying to be helpful.

The bar back is dark wood with large columns at each end and a mirror in the center. The mirror is flanked with glass metal shelves holding liquor and glasses. Down below are cupboards, coolers, and drawers; all dark wood. Above them is a marble top that matches the bar and is covered with more bottles.

For some reason there are several deer heads mounted on the wall and a lot of old portraits. I didn’t recognize too many of them; Eleanor Roosevelt and, I think, Fiorella LaGuardia were a couple I did know. The overhead lights are orangey tan inverted pyramid stained glass ranging in size from very large to just simply large. A dark wood partition with a wavy glass panel on top separates the bar from the seating for dining. There is a large cabinet of wine with wire mesh doors sits against the wall next to the door and opposite the bar. There is a row of clocks showing the times in major cities around the world sits above an archway in front of the open kitchen. There are a couple of televisions viewable from the bar and a news ticker that you have to crane your neck to view.

A lot of people from NBC must eat here, and several of them talk loud enough to make sure you know. They included the woman sitting next to me who made sure everyone knew she was the first female Executive Vice President in whatever division she worked in but had to threaten to resign to get the position, that she came from Michigan, and oh, so much more.

I had a Maker’s Mark Manhattan and did my best to avoid eye contact with anyone but the bartender.
Posted by Bar Man at 11:02 PM

$12.22 for a drink. I hope it was good. I've noticed that airport bars tend to have weird prices like that. A beer is never $5 even, it's always something like $5.37. Somebody explained it to me once. I think it's because airport bars tend to be run by national corporations and the prices are the same nationwide, but since taxes vary from state to state the after-tax price varies as well. I don't know why a local bar would have such odd prices, unless they figure that most of their clientele puts everything on plastic anyway.

Of the coming 1000 I am guessing these are not going to be rated as the most warm and cosey bars, not to mention a good price. I may take a trip just to order a Coors light on ice. Peace Trails JW

Roberto Iza Valdés said...
This comment has been removed by a blog administrator.
7:37 AM

Hi, You have a cool blog here. I'm always interested to see other people's blogs who are interested in wine or beer. I am a wine lover myself, and maintain my own wine blog www.pinotgris.net
Stop by and check it out (and say hi, too)!

Roberto Iza Valdés said...
This comment has been removed by a blog administrator.
2:08 PM

Roberto Iza Valdés said...
This comment has been removed by a blog administrator.
11:03 AM

Roberto Iza Valdés said...
This comment has been removed by a blog administrator.
5:15 PM

Juno-Regina said...
This comment has been removed by a blog administrator.
10:40 PM

Roberto Iza Valdés said...
This comment has been removed by a blog administrator.
9:47 PM

Anonymous said...
This comment has been removed by a blog administrator.
10:40 AM

Your one of my favorite people now ##NAME##. Great Blog! I'm sure glad I found your information... thank you for the knowledge! If you are interested, go see my ##LINK## related site. It isn't anything special but you may still find something of interest.

Unknown said...
This comment has been removed by the author.
9:26 AM