I visited the dentist early this morning and his office is up on 40th near Grand Central. It was an early morning appointment (my teeth and gums are in excellent shape) and nothing in the neighborhood was open so I decided to go for a walk. It was a beautiful morning, crisp and sunny. Well, walk I did, all the way over to 10th Avenue and down towards Chelsea. This is a good morning Irish Bar (well, it was open) on the corner of 33rd and 10th Avenue. The standard wooden bar with a black wood foot rest and light wood bar chairs with dark green plastic seats. Two round brass beer stations sit on the bar, each with five spigots. An old wood bar back with little cupboards that have stained glass windows and three glass mirrors with etchings of a seaside village and the bar’s name. The mirrors are largely covered with pictures, shiny black plastic squares upon which the bar specials are listed in fluorescent colors, a couple of football boards, and a drumhead with a Gallic design and O’Farrell’s Pub on it. Someone must be into origami though because there is a bunch of little paper birds and insects hanging on the center mirror. A clutter of liquor bottles sit on the tiered shelves in front of the mirrors and there are gray metal coolers with glasses sitting on top of them down below. Lightw with stained glass shades hang from the ceiling just behind the bar.

Opposite the bar is wood paneling with a ledge for drinks at the top and bar stools in front. Above the ledge are opaque glass panels. With various designs; a running horse, a harp and shamrocks, an eagle, and some kind of a crest with two flags. There is a narrow strip of dark patterned tin on the ceiling surrounded by wide, and thick, wood paneling. There is a dining area in the rear.

It is getting close to noon and the regulars are drifting in for lunch. Everyone seems to know everyone else in here. Some local lad is fighting somewhere tonight and it seems like most of the bar is planning on being there. I am guessing the fighter is John Duddy because I know he is fighting at the Hammerstein Ballroom here tonight and he is a big favorite of the Irish. He is also 12 and 0 with 11 knockouts under his belt. Sounds like it should be a fun night.

I had a Dewar’s and soda for an eye-opener, and quite an eye-opener it was. They pour with the proverbial heavy hand here. My kind of place. 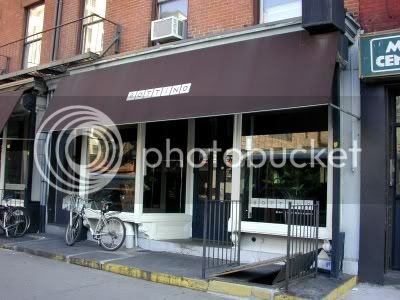 Heading down 10th Avenue I stopped into this place between 25th and 24th. It is a newer place that is following the art galleries that are moving into Chelsea. I guess they were just opening for the day because although there were a lot of people scurrying around there wasn’t anyone behind the bar and, it seemed, nobody seemed interested in going back there. People were drifting in for lunch and the hostess would seat them but didn’t seem able to find a bartender despite my asking here twice. After about ten minutes I finally managed to attract the attention of a waitress who took my order for a glass of Sangiovese di Romagna Poderi dal Nespoli 2003. Now, when you order a $9 glass of wine you should be shown the bottle, given a taste, and then, if it is acceptable, have a glass poured for you. Not here. About two minutes later the waitress appeared with a glass of wine that was already poured. I can only assume that it was what I ordered but have no way of knowing. And it wasn’t all that good either. Probably left over from the night before. I will not be coming back here because for a place trying to appear classy it doesn’t appear to have much class. If this place stays in business I will not only be surprised, I will be appalled.

There is a narrow wooden bar with a foot rail that is flat silver metal. The silver barstools have narrow metal legs and small round seats. The bar back has a plain mirror with a tiered shelf for liquor sitting atop a black cooler with a white top. There is also a set of dark wood shelves with wine bottles, glasses, a bit more liquor, and three shelves of cans of soda and a few bottles of tonic and soda.

The wall opposite the bar is lined with padded dark salmon sofa like seating with round tables and chairs in front. Above that the whole wall is lined with shelves of wine bottles. There is a dining area in the back, but believe me, I will never see it as a customer.

I had my glass of red wine and headed out, never to return. 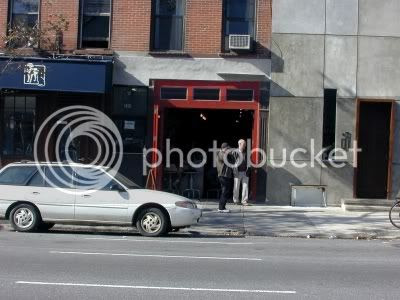 Down 10th Avenue a bit at 205 between 22nd and 23rd is this real hole in the wall. It is maybe 15 feet wide and has no sign out front, but it is a real tapas bar. The place was really crowded and I broke down and ordered the deviled eggs. They were delicious, and Bar Man knows his deviled eggs. The small bar has a white marble top and a distressed metal front with a black metal strip for a foot rest. The bar stools are metal with square brown seats that spin. Whee!! The only problem the place was too small to do it. Three hooked metal silver metal beer spigots sit on top of the bar and there is a round frosted glass vase holding sprigs of branches with rose colored leaves and berries. The bar back is kind of a plain bookcase looking thing with bottles of wine and glasses instead of books. The top two shelves have narrow compartments for wine. A blackboard in the center section lists their daily specials Plain, unadorned lightbulbs hang above the bar from the deep salmon painted ceiling.

The wall opposite the bar is brick and has a couple of beat-up silver painted metal doors on it. One is like a fire door and it is slid open to reveal a narrow nook with a table. There is one other table in the back that seats six. Other than those two tables the only seating, other than at the bar, is a narrow ledge against the wall with stools in front. The doors in front were open to the street and it was really nice on this pleasant day. Very reminiscent of Spain.

Now here, when I ordered a glass of wine that Meryl, the bartender, recommended she showed me the bottle, let me taste it, and only after I said I liked it did she pour me a glass.

Meryl, A Bartender Who Knows How It Is Done 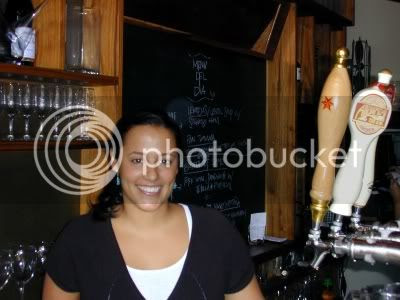 This is the way it should be done. If you are in the neighborhood do yourself a favor and stop in here. There was a reason that this place was packed and it wasn’t just because it was small.

I had a glass of the aforementioned wine and headed on home.

Another three bars today bringing the total for the year to 920 and leaving just 80 to go. Someone who reads my blog is coming into New York tomorrow and I am meeting him and some of his friends for a drink. I will be meeting him at Swift's at 3:00 P.M. I have already had a drink there so I won't be able to count it, but I am sure we will find someplace close that I haven't been to before.
Posted by Bar Man at 8:53 PM

Just searching around for good blogs,
and found yours, thanks for the information keep it going thx.

I am going to add a link on my personal blog if thats ok with you. Excellent Post. Perhaps you will want to take a look at my web site and give me an idea how to improve it. Fresh Breath

Nice blog you have. Recently I created a site about bar equipment and would love you to take a look to see what you think

Really enjoyed your posts. I have a bar stools site I think you might enjoy. Let me know what you think.