I took the subway to Grand Central again today but decided to walk over to 2nd Avenue to see what I could see. 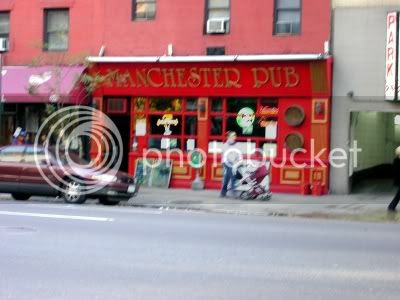 A bit of a hole-in-the-wall Irish pub at 920 2nd Avenue (between 48th and 49th Streets) that is a pleasant enough place to drop into for a pint. There is a decent sized wooden bar with a shiny varnished surface and metal beer signs mounted on the front. A silver foot rail and plain wooden chairs. There is a raised arm rest on the front ledge of the bar (where else would it be) that makes it necessary to use little wooden platforms to set your plates on if you are eating at the bar. A large inverted U shaped silver beer station on the bar has about a dozen spigots.

The bar back is pretty much all mirrors with glass shelves in front of them holding the liquor. A wood shelf underneath holds the glasses and there are metal coolers underneath that. A cricket bat with Double Diamond (a beer) printed on it hangs in front of the mirrors. Bare orange bulbs hang over the bar but they are directed more towards the bar back.

There are four televisions in here including a good-sized flat screen one mounted behind the bar by the windows up front. The ceiling looks like inverted gray egg cartons for very small eggs under dark wooden slats. There are three octagonal tables with chairs opposite the bar. There are also narrow bench-like tables up a step and against the far brick wall. Nothing too fancy in here, just a good functional place to have a drink.

I had a pint of Guinness. 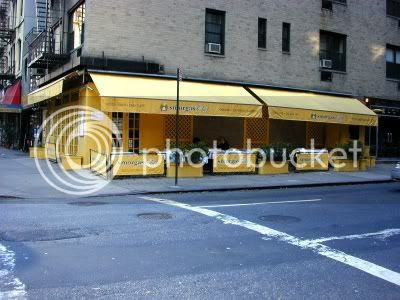 A Swedish restaurant with a Polish bartender just across 49th from Manchester Pub. They didn’t have lefse or lutefisk on the menu, but they did have Swedish meatballs with lingonberries though. It has a nice little bar with a shiny wooden top, and a brown cement foot rest. Just room enough for half a dozen dark, well worn wood bar chairs. A bar back that featured an espresso machine, a breakfront with a mirror and a shelf for bottles near the top and a tiered shelf below. The beer station, a gunmetal gray tubular device, has only one spigot for Carlsburg. The beer glasses surrounding it have gold rims and sport the Carlsburg name. A silver metal modern art kind of a light at one end of the bar looked a bit like five metal eyeballs on a stalk. At the other end of the bar was an empty vase holding a collection of dried twigs. A tubular brass rack for glasses hangs over the bar. There is a large mirror at the left end of the bar that makes it appear so much longer (not).

The rest of the space is filled with little square tables with white and gray marble-like tops. The wall opposite the bar is brick but largely covered with a mirror. There are maroon booth-like seats against it with tables and chairs in front. The lights that hang from the ceiling are made out of small blue bottles mounted in clusters. The yellow flowers on the tables also sit in the same type of blue bottles. The restaurant is on a corner and there are tables and chairs on the sidewalk outside.

I had a glass of E. Guigal Cotes du Rhone, an excellent red wine. 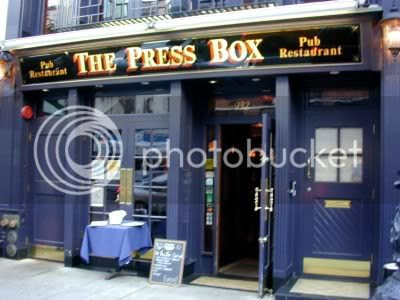 A good-sized Irish bar that veers a bit towards the fancy side at 932 2nd Avenue. It has a nice polished wooden bar with a brass rail. The bar chairs are wood with kind of brocade patterned cloth seats. The bar back is a fancy wood affair with columns, glass shelves, cabinets with glass panes. It really is pretty nice. Coolers with flat-black metal doors and round silver handles are down below. Two U shaped brass beer stations on the bar have ten spigots each. Lights with flat bottomed pot shaped shades of pale tan and brown veined marble hang over the bar. There are brick walls and a wooden floor. Lots of photos of historic events and framed newspaper clippings hang on the wall (Press Box, get it), along with wood framed mirrors. There are a lot of little tables with chairs and stools and small lit candles sit on all of the tables. A large dining area is in the back and stairs in the front lead up to what I presume is another dining area.

I had a pint of Guinness and headed on home.

Another nice day with three bars hit making 917 for the year and leaving 83 to go.
Posted by Bar Man at 7:34 PM