Well, okay, it wasn't really Bernie Day, but my good friend Bernie Carpenter is an usher, although I don't think they call them that anymore, at citiFIELD and won an award for the way he makes the guests (that would be paying customers) feel welcome and at home.  Considering he was the only usher so honored it really was special. And he got four tickets to give to his friends and he got to watch the game himself instead of standing on his feet making guests feel welcome and at home. He told me some of his secrets about how he goes above and beyond, but I promised not to reveal them

The Mysterious Chinese Woman and I got two of the tickets and our friends Bob and Loretta got the other two.  We were all supposed to meet at the big apple because I had the tickets.

The Big Apple Minus Bob And Loretta 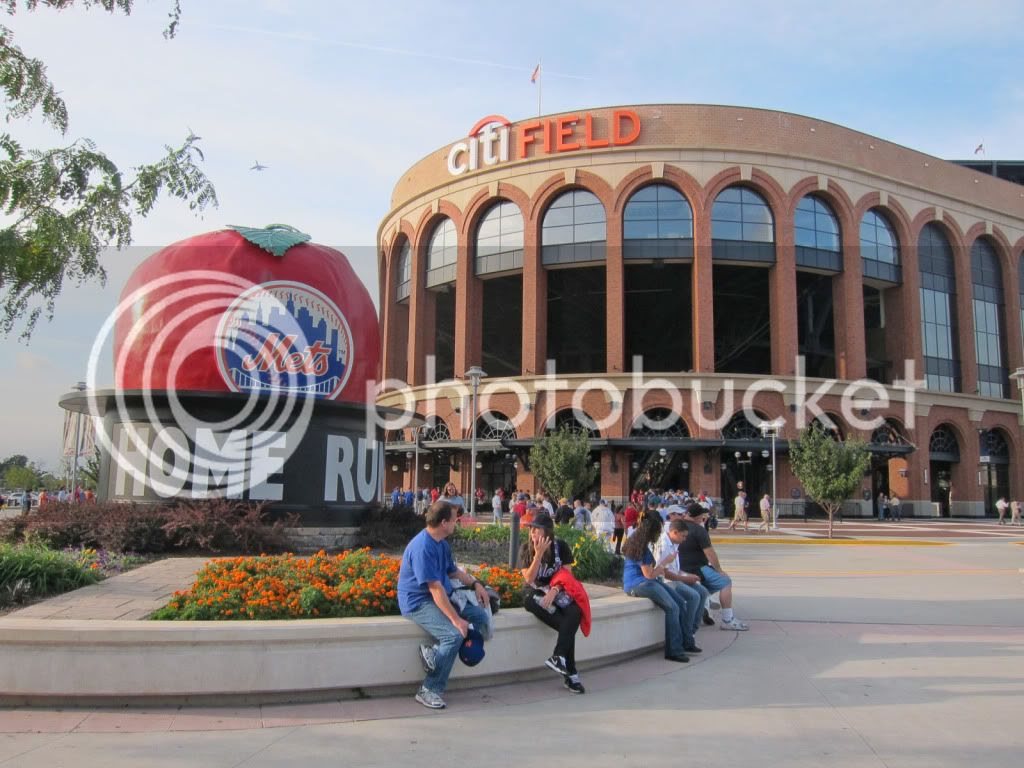 Actually they had called earlier to say they couldn't make it so we weren't really hanging around waiting for them to show up. But we did get to the game early. Bernie said we must be in our seats by 6:30 PM so we wouldn't miss the award ceremony.  And we were.  Earlier than that, even. We didn't want to take any chances. But no problem, there was so much to do. 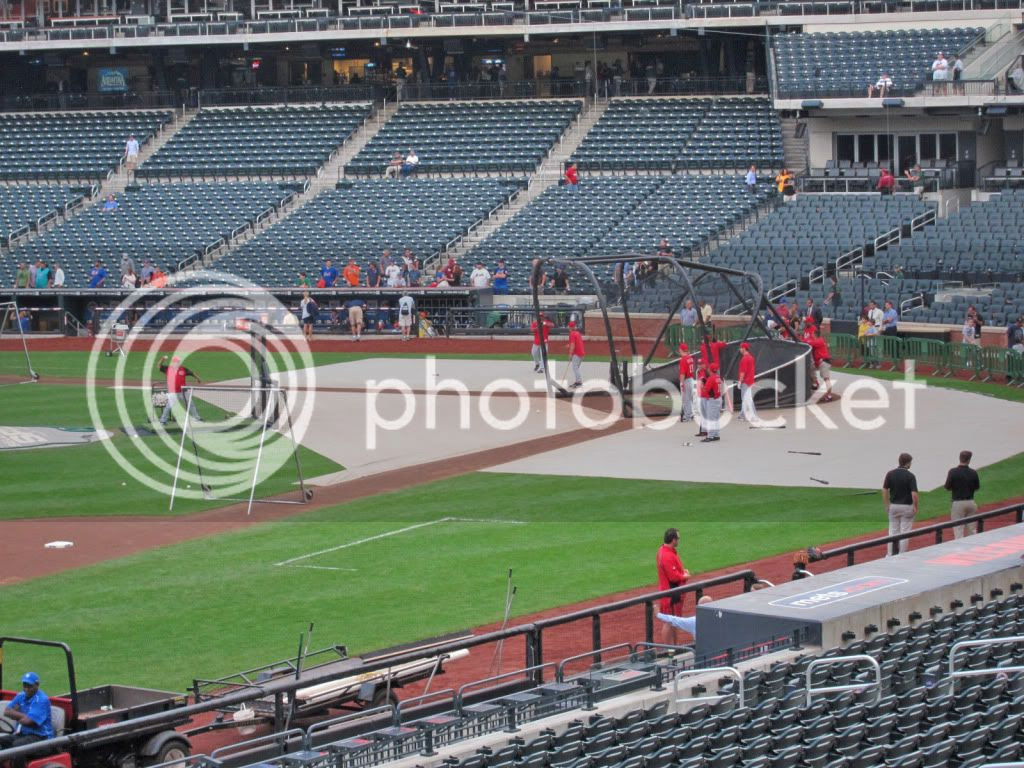 Watching The Lights Come On 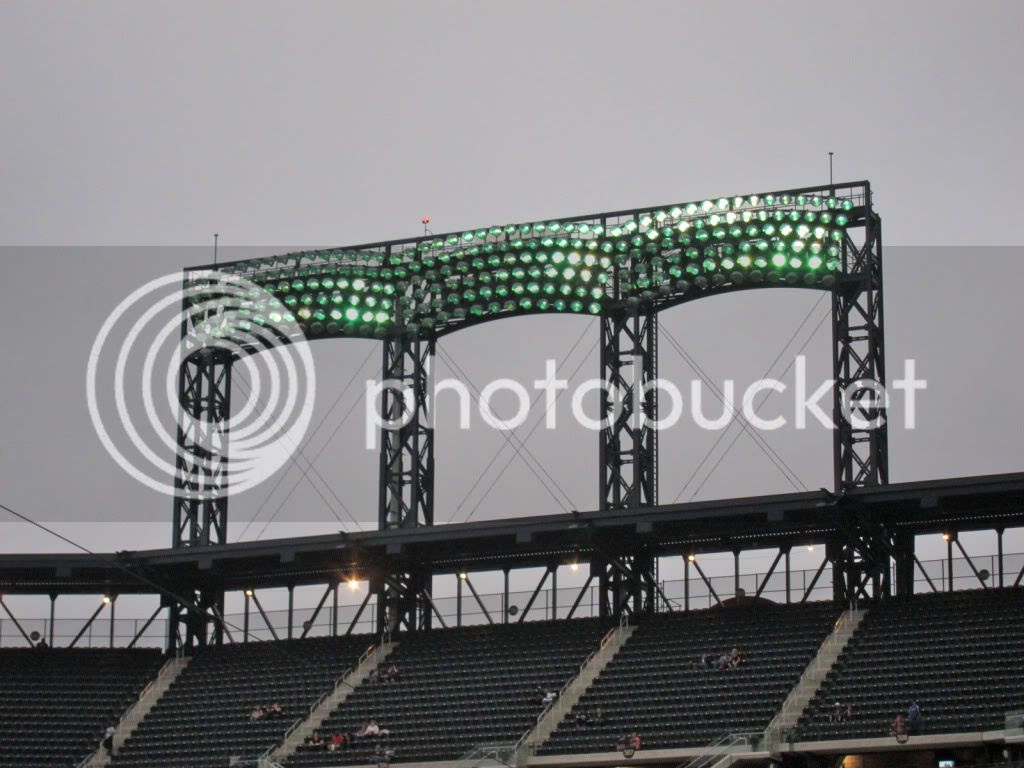 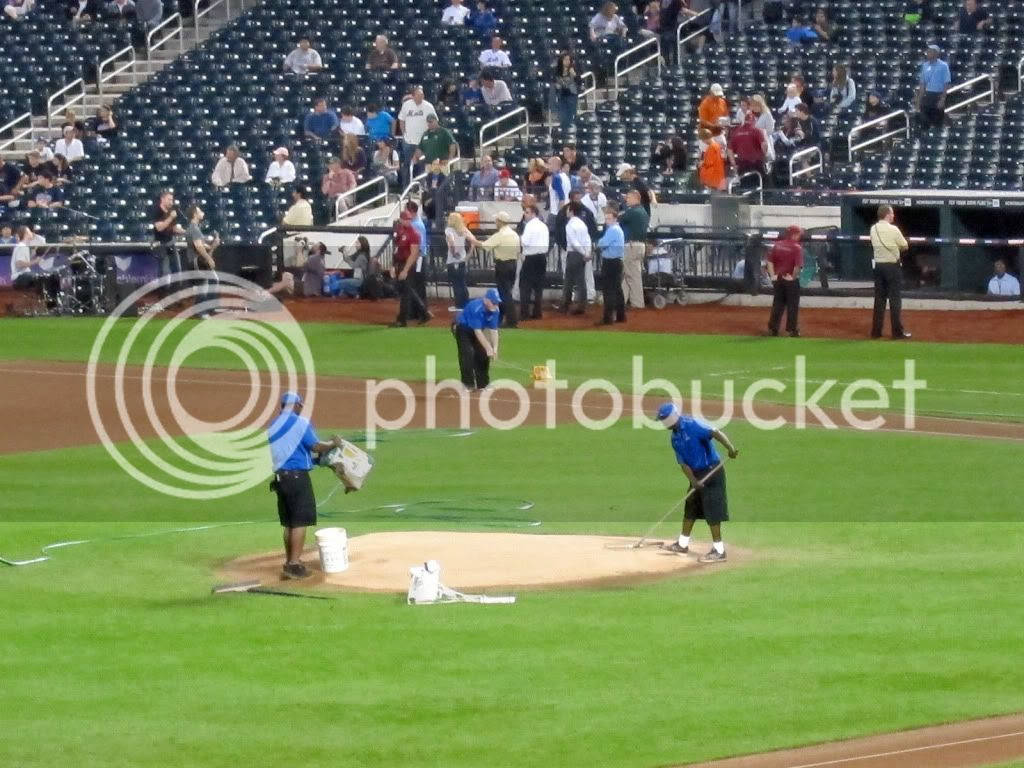 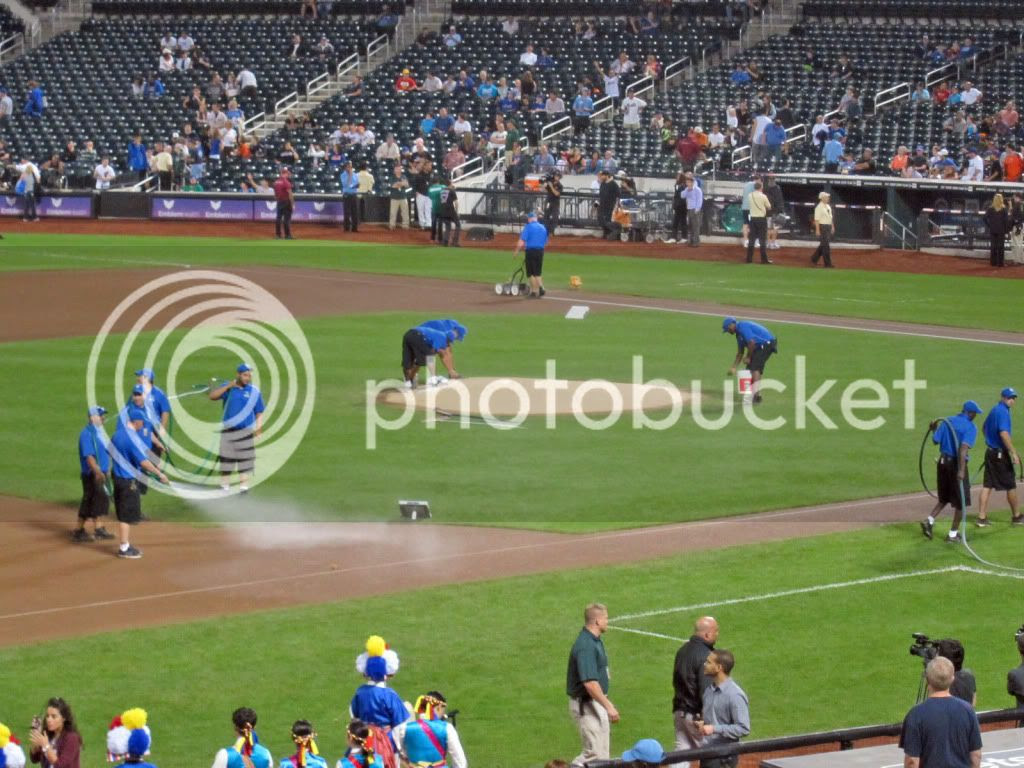 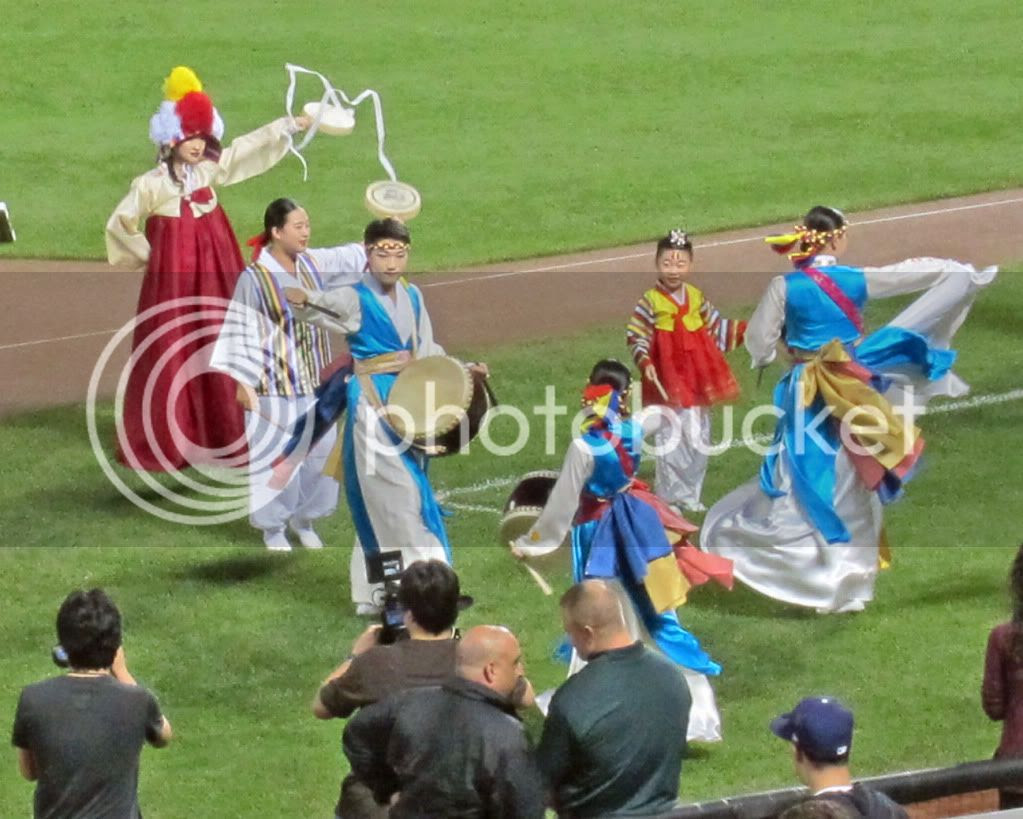 But it was all worth it, because we did have very good seats, ones where you could actually see the whole field, unlike at Yankee Stadium.

Seats With A View And You Could Even See The Scoreboard But the wait was worth it, plus I had time to enjoy a Reuben Dog and a beer without fighting the crowds to get them.

And then, the moment we were all waiting for, Bernie getting his award. 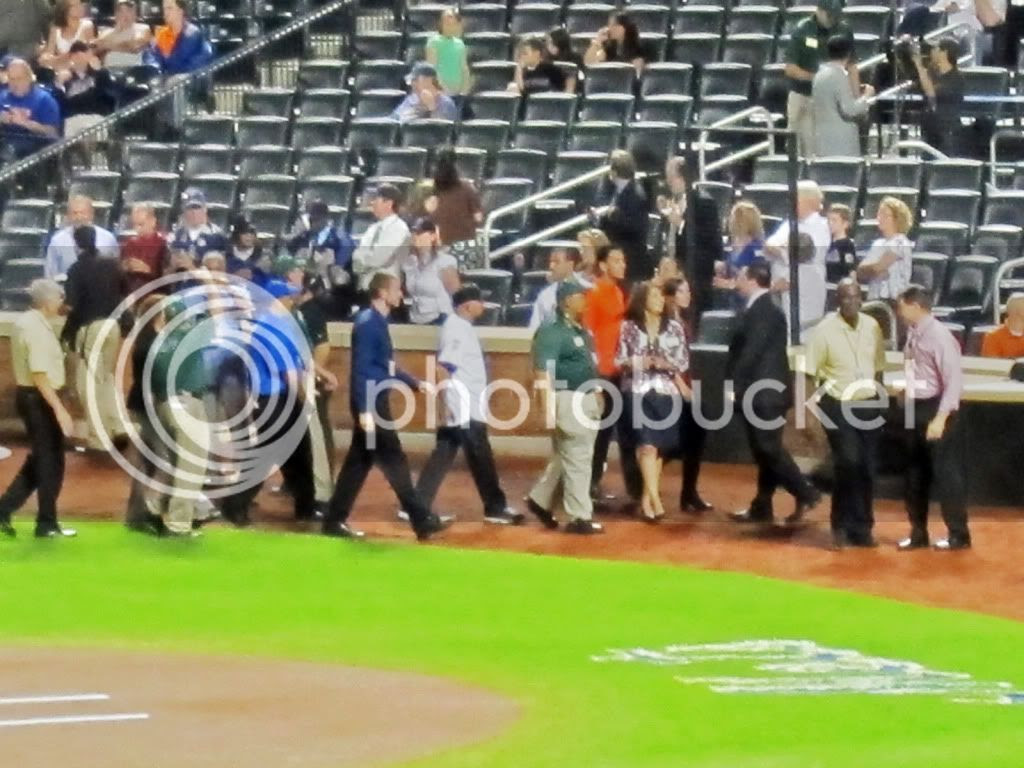 That is him in the green shirt at the front of the line. And in case he is a bit hard to see, this should help. And he should be proud. He hasn't been ushering all that long, just a couple of years, and to be singled out for recognition was quite an achievement. He also got a trip to the Yankees spring training camp in Florida as part of his award. Not bad at all.

And then, believe it or not, a game broke out.

A Swing And A Miss 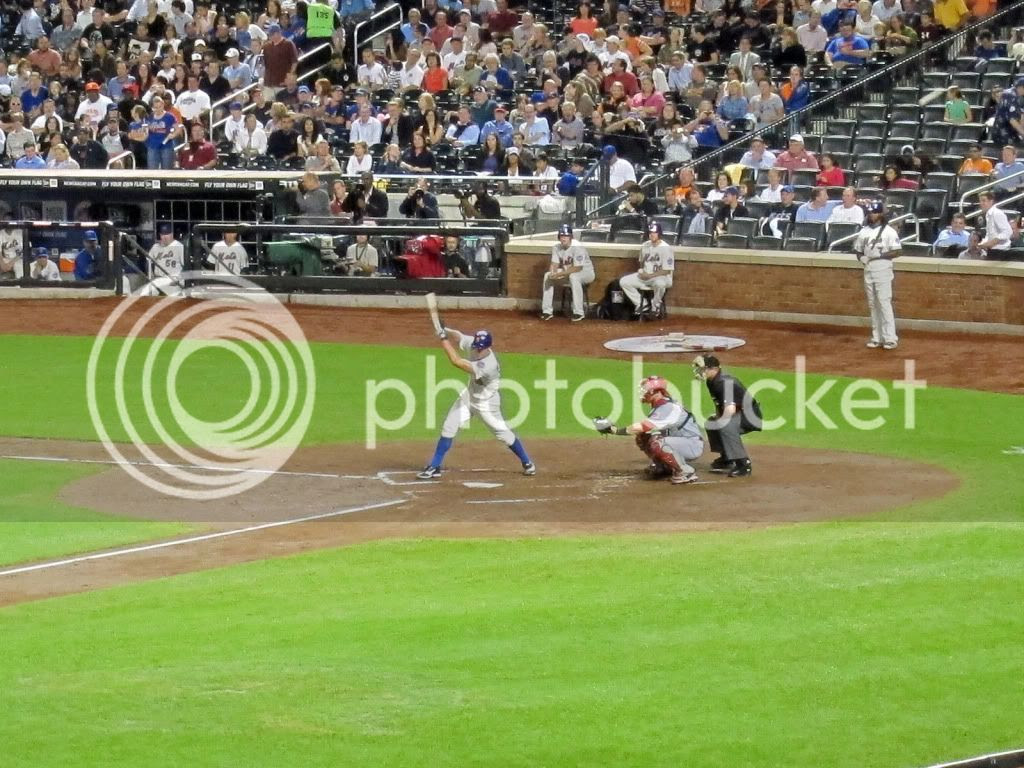 And  because Bernie didn't have to work, he came up and sat with us to watch the game.

Bernie And You Know Who 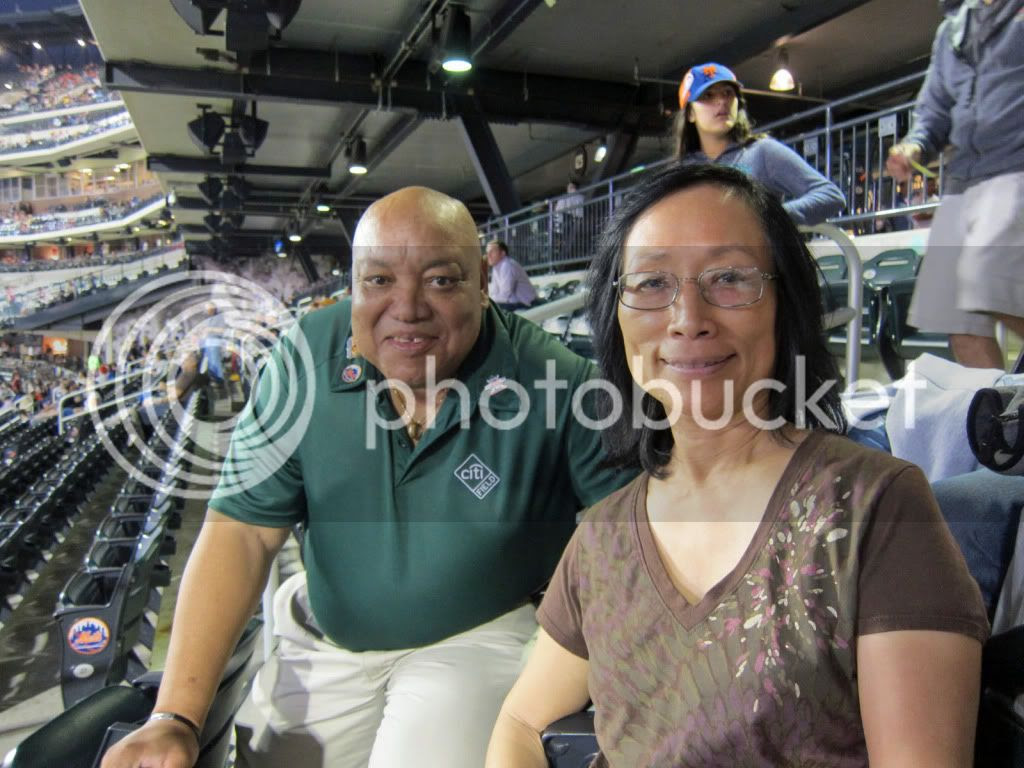 Well, to be honest, we didn't stay for the whole game.  We left before the seventh inning stretch but I don't feel too badly about that. Our subway wasn't running for one reason or another so we ended up taking the Long Island Railroad back to Penn Station. No big deal, just a bit more of a walk to the train, but they didn't charge us. And we got home in time to see the Mets lose in extra innings. Three extra innings, in fact.

Just a reminder, this Sunday is the Atlantic Antic right here in Downtown Brooklyn. The best street fair in all of New York. I will be there and you will be able to find me in front of Pete's Waterfront Ale House from around 2:00 PM to about 4:00 PM listening to my friend Dimitri and The Black Coffee Blues Band. Great food, plenty of beer, and great music. What's not to like?
Posted by Bar Man at 9:58 PM