No Accounting For It

Ah, what a change.  From bright and colorful Puerto Vallarta to dull and gray Brooklyn.  I did manage to find a little bit of color as I headed to the subway for my annual visit to my accountant. 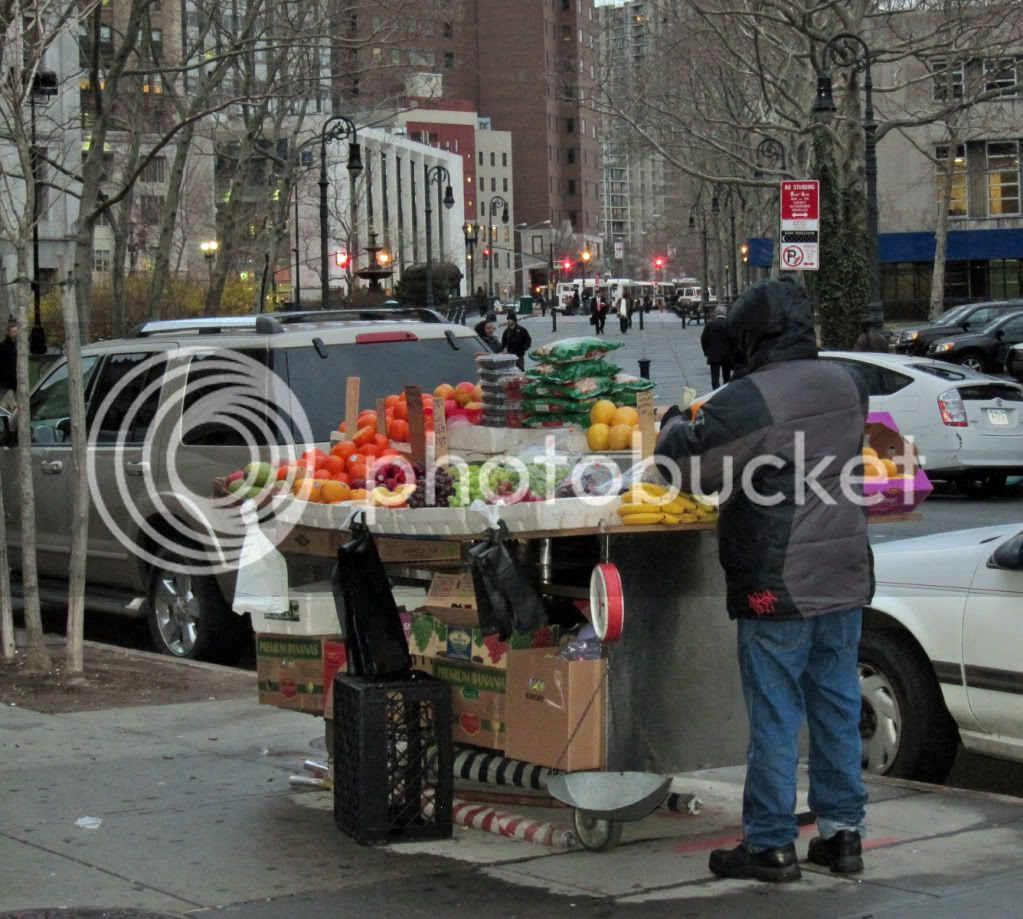 My visits to the accountant are pretty painless.  I just bring him my folder of tax-related documents and then go home and wait for my completed taxes to be messengered to me.  Of course the real pain occurs a few weeks later when I get the bill for these wonderful services.  One of my foolish pleasures, though, having someone else take care of my taxes for me.  I think of it as a mini-vacation, and it costs just about as much.

The Mysterious Chinese Woman and I decided to stop into the Oyster Bar Restaurant in Grand Central on our way home.  I hadn't eaten there in ages, and it is a real New York classic. 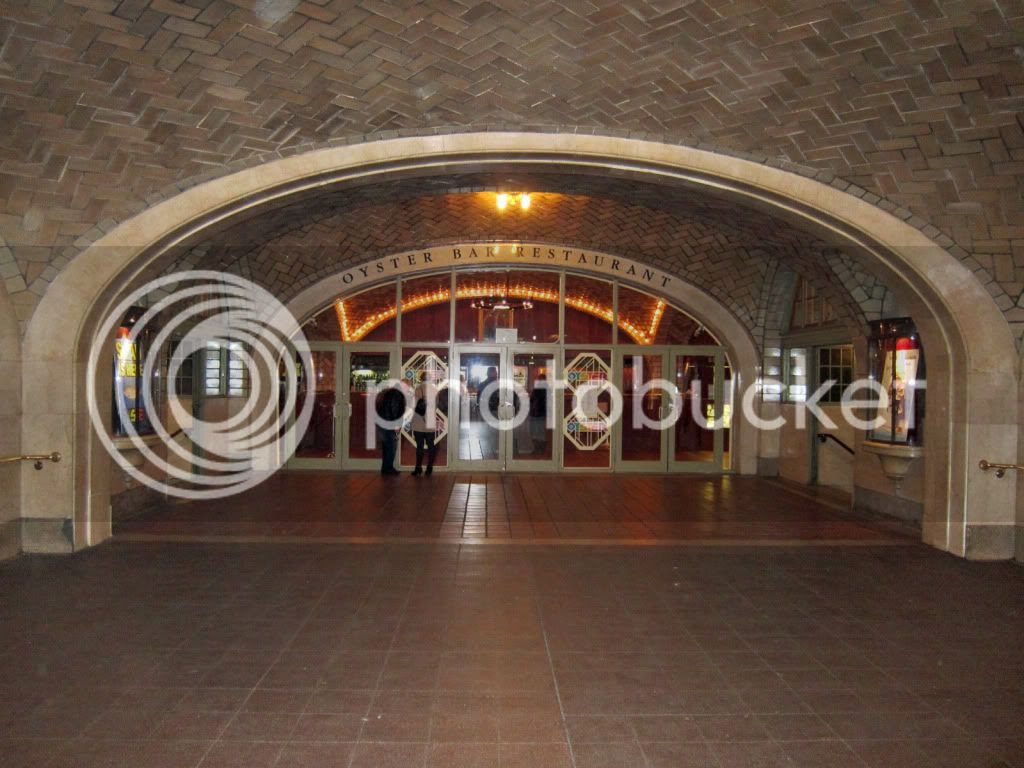 We got there a bit before its 5:00 PM opening so we popped into the adjacent Saloon for a before dinner beer. I had an excellent draft Chimay and the Mysterious Chinese Woman had a Brooklyn Brewery Lager.  I noticed a couple of guys sitting next to me at the bar eating oysters and drinking Martinis.  One was wearing a Yankees cap so I asked them if they were at the game.  Well, obviously, they weren't at the game, they were sitting next to me at the bar.  But they had been at the game.  I liked the looks of their Martinis, just the right size, not the overly large ones you usually get, with a bit extra in a glass on the side.  This comes into play later.

Okay, not much later.  After finishing up our beers and waiting for the Mysterious Chinese Woman to stop belching (she said I made her drink too fast) we headed into the dining room.  Now, she wasn't really belching, I just put that in for comic effect.  She complains when I make up stories about her, like her hollering BINGO when she didn't have a card.  I tried to tell her that the Mysterious Chinese Woman in my blog isn't really her, just a character loosely based upon her.  That got me nowhere.

The Mysterious Chinese Woman, What A Character 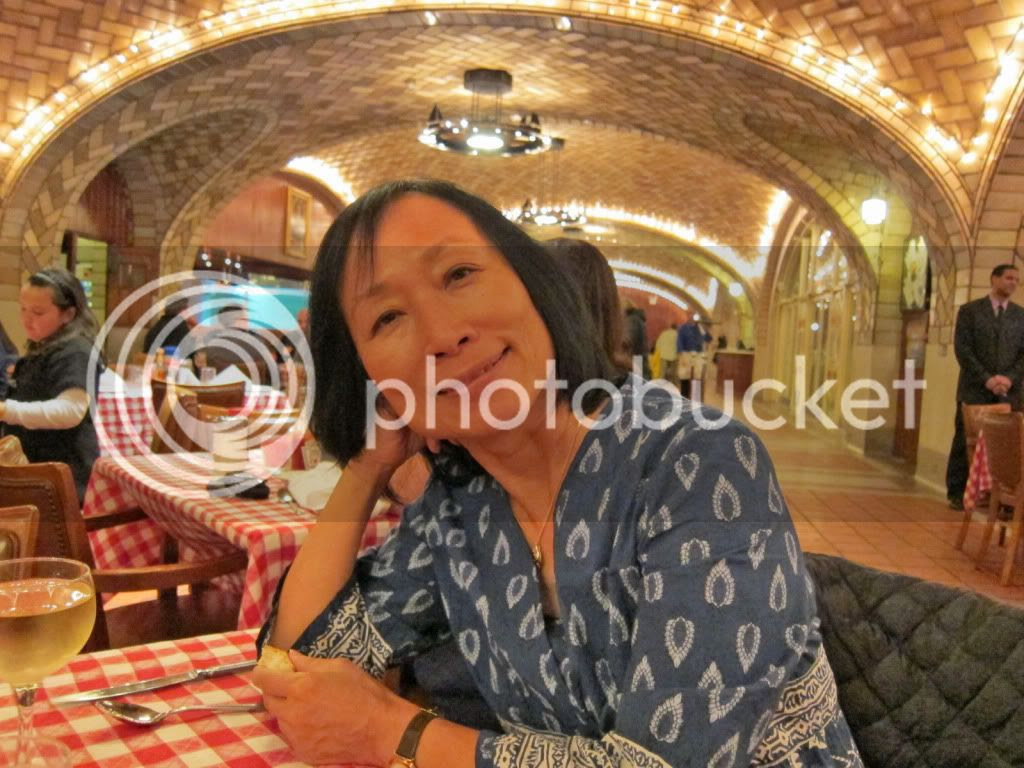 With thoughts of Martinis running through my brain I realized that I hadn't had a Gibson in ages.  I figured if anyplace could make them the Oyster Bar Restaurant would be the place.  And I was right.

Not A Martini, But A Gibson 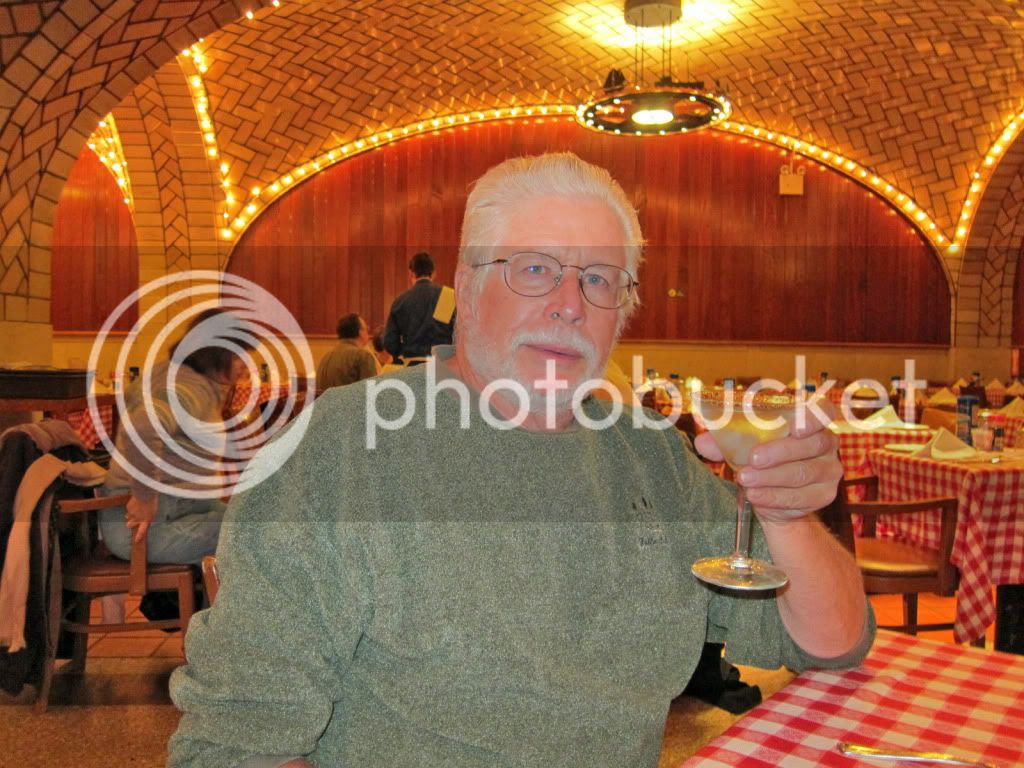 It must be hard for most bars to keep those little onions in stock.  Probably not much call for them.  Kind of reminds me of buying hazelnuts for a bar so they could put them into my Rusty Nails.  That didn't work out very well, but that is another story.  And probably one you have already heard.

Now if you are at the Oyster Bar Restaurant you would really be remiss if you didn't order oysters.  They have several different kinds and they are, like the fish they serve, absolutely fresh.  And delicious.  I ordered half a dozen raw oysters, two each of three different kinds, and wolfed them down before I even took a picture. 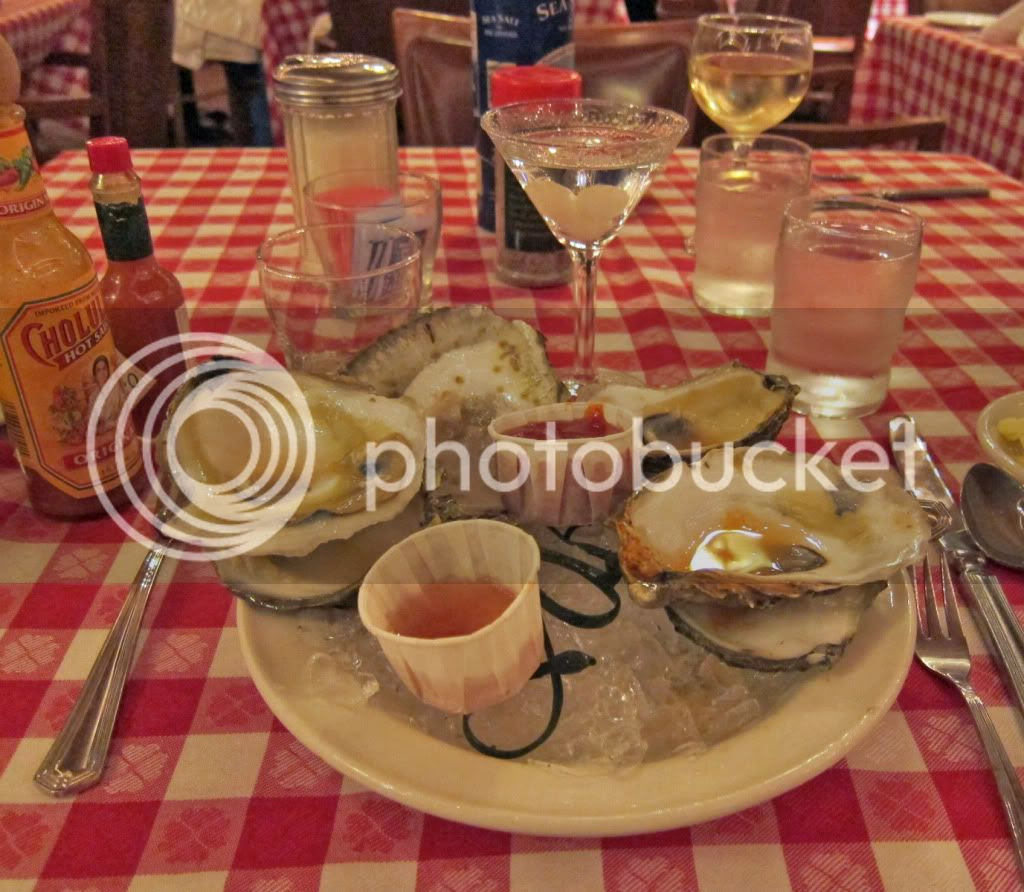 They serve them with a couple of house sauces, but I prefer mine with just horseradish and a dash of Tabasco sauce or, better yet, a dash or two of Cholula Hot Sauce.  And they provided both.  The Mystereious Chinese Woman had fried oysters for her appetizer and there weren't even any shells.

For dinner I had the pan-fried lemon sole. 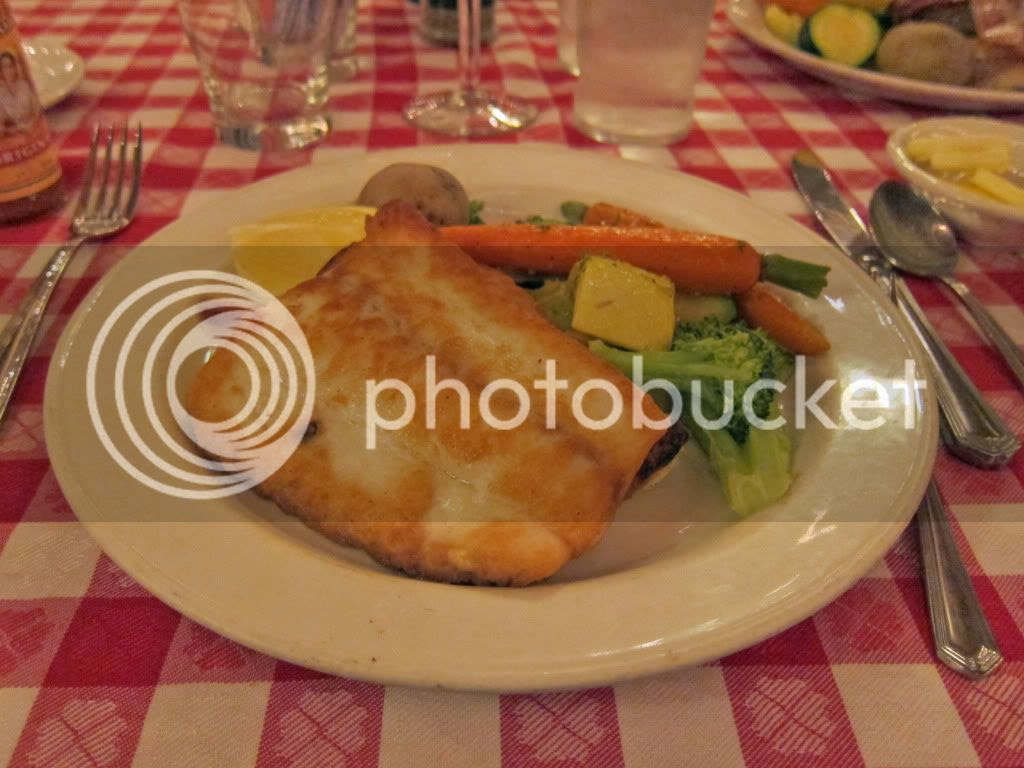 They adhere to the less-is-more style of cooking here.  Nothing at all fancy and no added flavors.  The fish is the dish, lightly browned and served with lightly roasted vegetables.  Quite delicious.

The Mysterious Chinese Woman ordered shad that came with its own roe.  We had gone to a shad festival one time but never actually ate any so she wanted to try it.  I was surprised by how dark the meat was.  For some reason it was served with bacon.  My mother used to cook liver with bacon, the theory being that the smell of the bacon disguised the smell of the liver.  I hope that wasn't the thinking here. 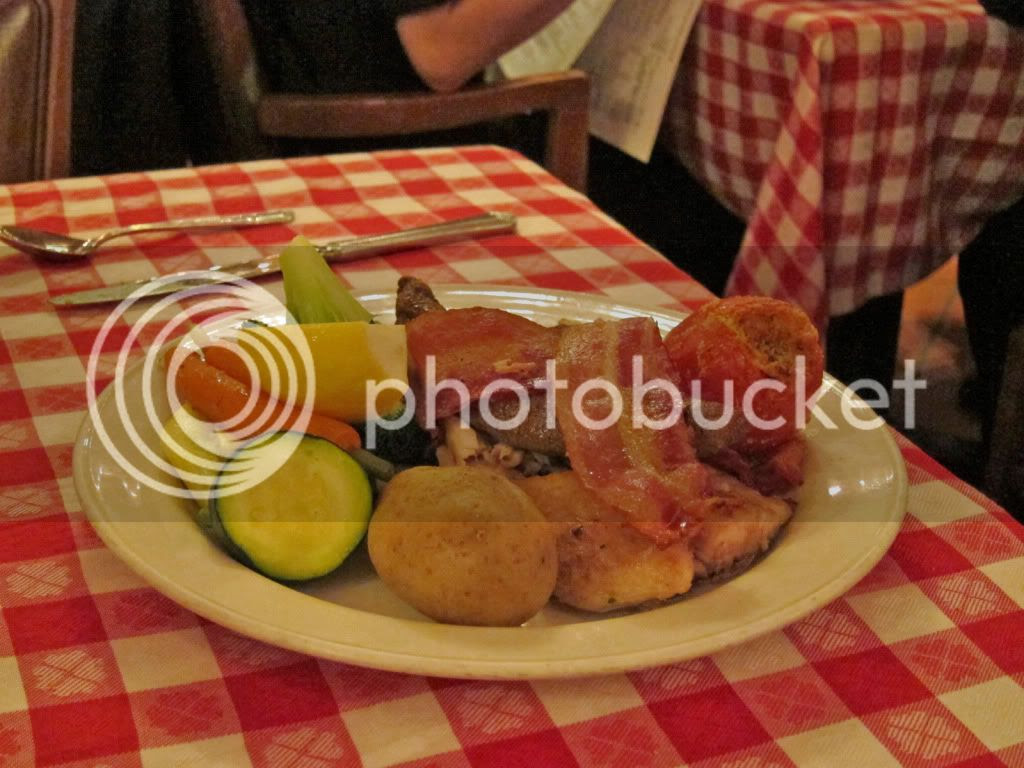 Actually, she said it was very good.  I never did taste it though, but why would she lie to me.

If you ever are in Manhattan you really should visit Grand Central.  It is especially nice now that it has been all fixed up, and there are a number of good drinking spots in there.  A couple of them on the balconies at either end of the main hall.  There is a Michael Jordan's Steak House there too and it is quite good.  And by all means check out the Oyster Bar Restaurant.  It is very classy and like stepping back in time.  Well, except for the prices.

We caught the subway home and I still had a hankering for another old-style cocktail.  I had just gotten an email from Esquire with a few classic recipes.  One was for a Manhattan that they claimed was close to the original, half Rye whiskey and half sweet vermouth with no cherry.  I think they may have gotten the Rye part wrong because they suggested something like a Wild Turkey Rye whiskey.  The original Manhattans were made with Canadian whiskey that they call rye.  Oh well, I went the non-traditional route and used my go-to Bourbon, Maker's Mark and mixed it half and half with Vya sweet vermouth.  Well shaken and served straight up it was a perfect nightcap.  So perfect that I had three.  But they were small.
Posted by Bar Man at 11:25 AM