Oh, I know, I have been back in Brooklyn for almost a week now, but I don't really consider myself to be back home until I have popped into Waterfront Ale House.  I could have gone earlier in the week, but I like to wait until Gaid, the world's friendliest bartender, is on duty.  I hear that Waterfront Ale House actually considered changing their "Happy Hour" sign to "Angry Hour" when he is on duty.  I guess that wouldn't be inappropriate for a bar that boasts of warm beer, lousy food and an ugly owner. 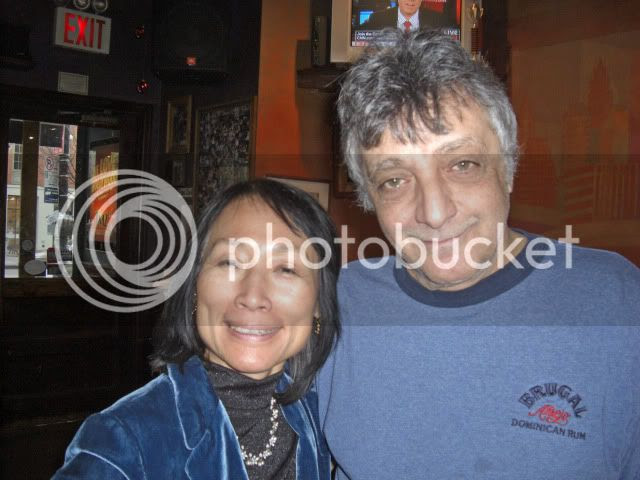 First thing I had to do was peruse the day's offerings.

Plenty To Chose From 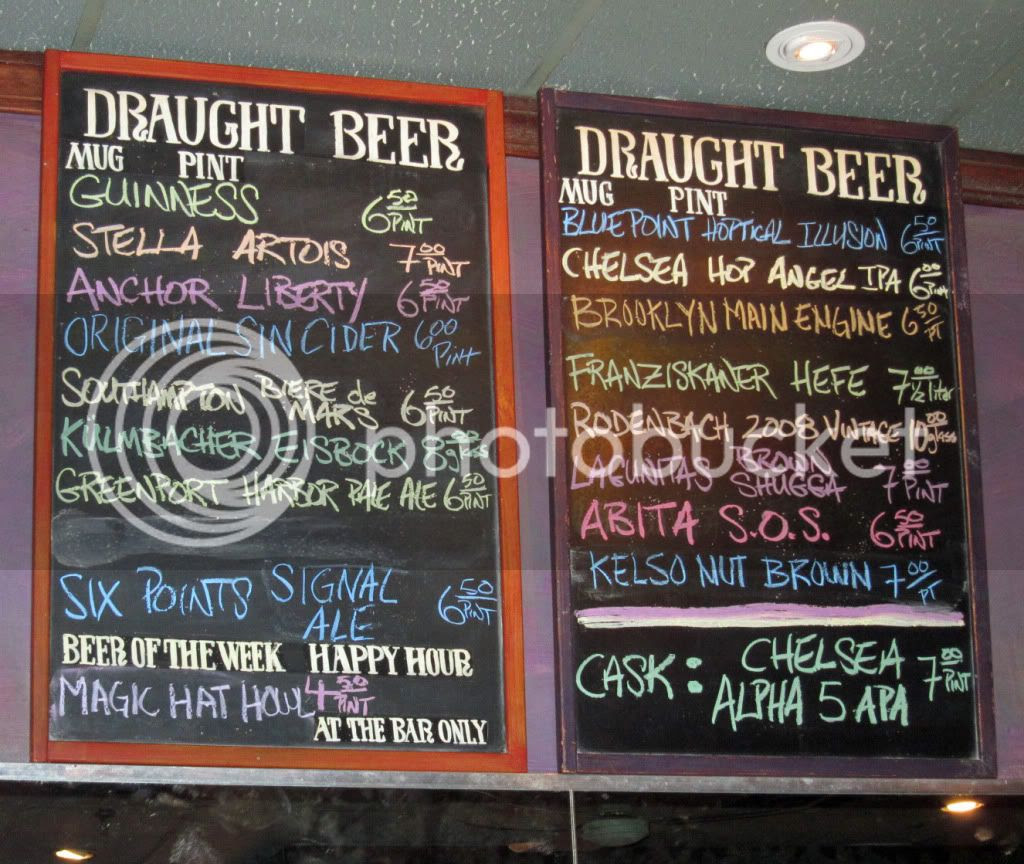 I chose the Bluepoint Hoptical Illusion but then spotted the Brooklyn Main Engine so I thought I would try that and give the Hoptical Illusion to the Mysterious Chinese Woman. But Gaid couldn't find the Main Engine and said they didn't have it. So I switched to the Kulmbacher Eissbock, a dark and hearty beer, not for the faint of heart. 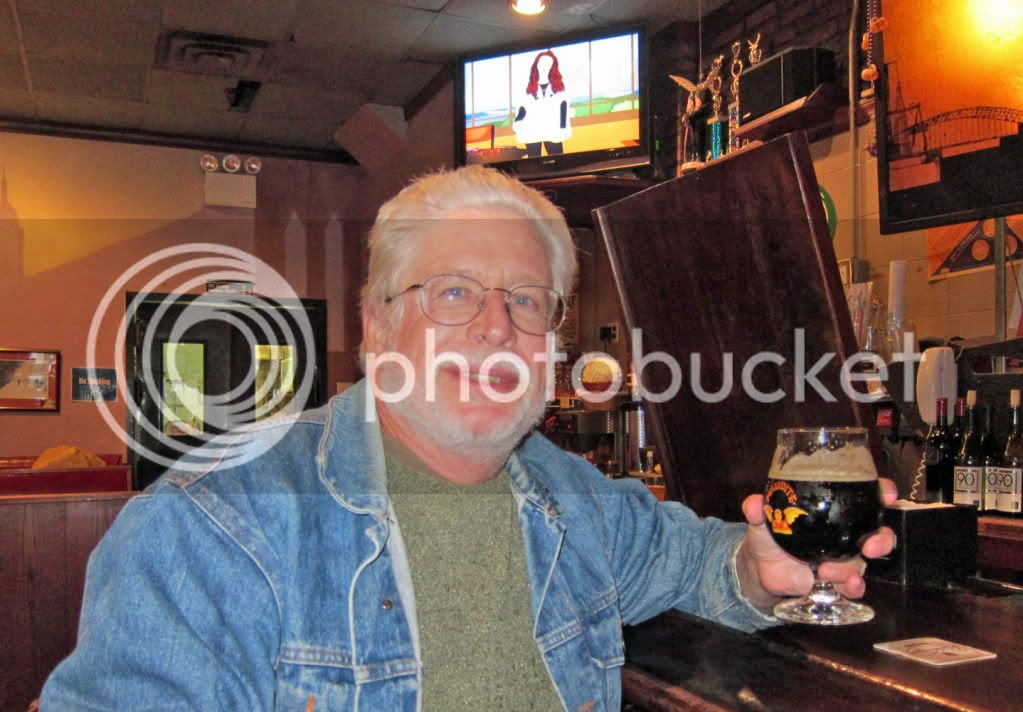 The Mysterious Chinese Woman enjoyed her Hoptical Illusion. I was afraid it would be too hoppy for her, but I think it was a welcome change from drinking nothing but Corona, Pacifico and Tecate for four weeks. My most flavorful beer was a Dos Equis, and most bars don't seem to carry it.  Not that I don't like Mexican beers, because I do.  But I also like variety in my beers, and that isn't something you find too much of.  I will make and exception for Minerva, a Mexican micro brewery that puts out a line of craft-beers which are almost impossible to find in bars and restaurants.  There is a beer store near where I stay in Puerto Vallarta, and they stock it.  It is a bit pricey and the alcohol content tends to be higher as well.  But I digress.

Quite Delish, Said The Dish 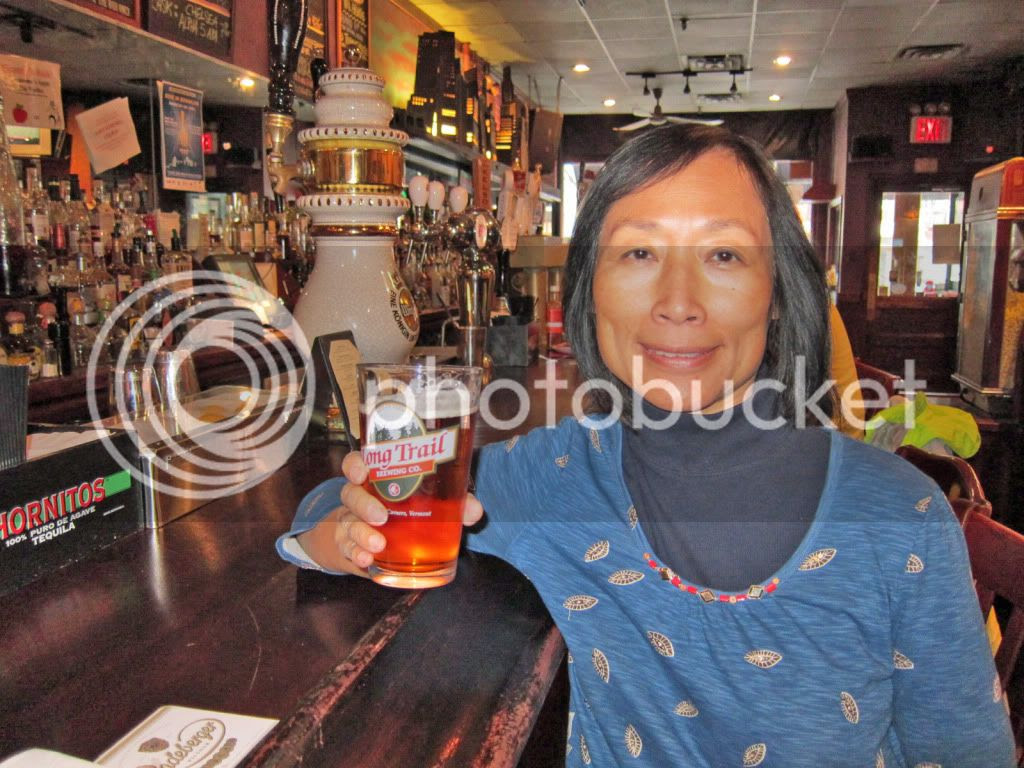 Gaid was a bit harried because there was a table of non-regulars who were ordering all kinds of bizarre drinks. Some of them with Ginger Beer and one that nobody seemed to know how to make so it became a two-man collaboration. When Gaid finally finished making it and, believe me, it wasn't easy to watch, I said that it looked so good I wanted one too. You can imagine Gaid's response. Suffice it to say that I didn't get one (whatever it was).

With my help Gaid managed to find the spigot for the Main Engine so I ordered one of those.  The handle looked like a train engine, so it was kind of hard to spot.  Brooklyn Brewery should put out Caboose, that way the handle would be red and much easier to find.

Me And My Main Engine 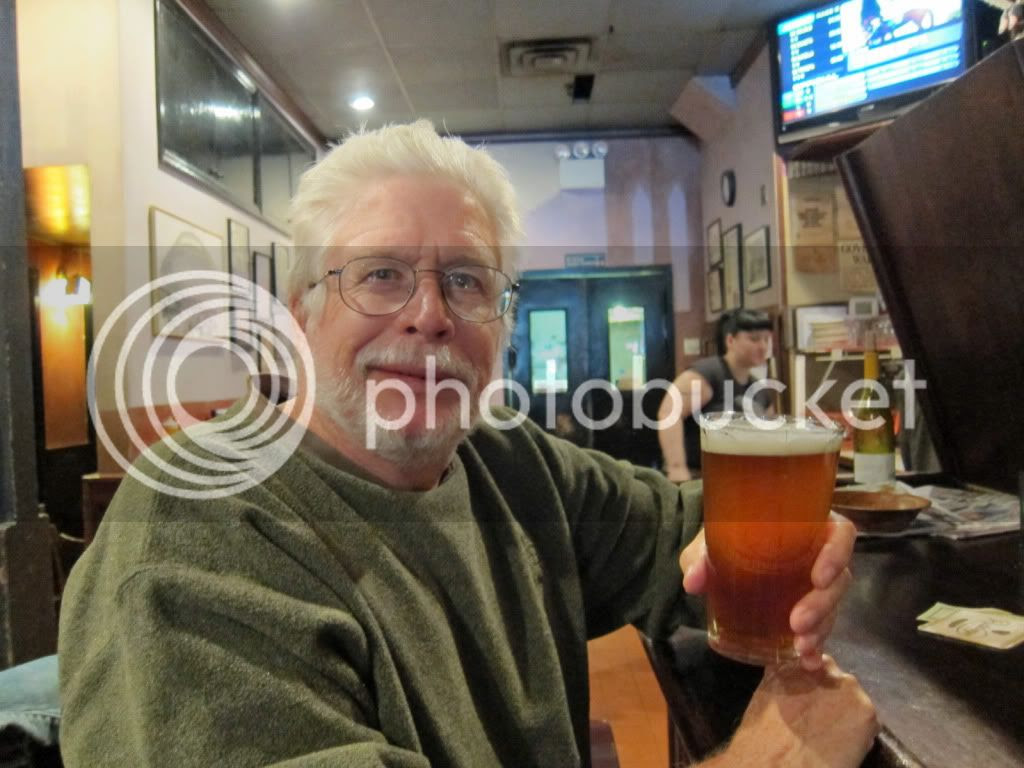 The Main Engine was, in my opinion, just so-so.  And it tasted a bit watery, but that might because it was chasing my chewy beer.

Now Jim, the cook, also aware of Gaid's command of cocktails, suggested that I order a double Negroni. But that would have been easy. And Gaid does have a good command of standard cocktails, just not ones that involve a great deal of muddling and ginger beer.

Anyway, the Mysterious Chinese Woman said something to about a Negroni sounding good. Then we reminisced about a time when I ended up getting everyone at a Greenwich Village bar drinking a Negroni. Now that was a fun afternoon.

But the Mysterious Chinese Woman said she couldn't drink a Negroni on an empty stomach. So she ordered a bowl of French Onion Soup. And the soup here is delicious.

Tastes As Good As It Looks 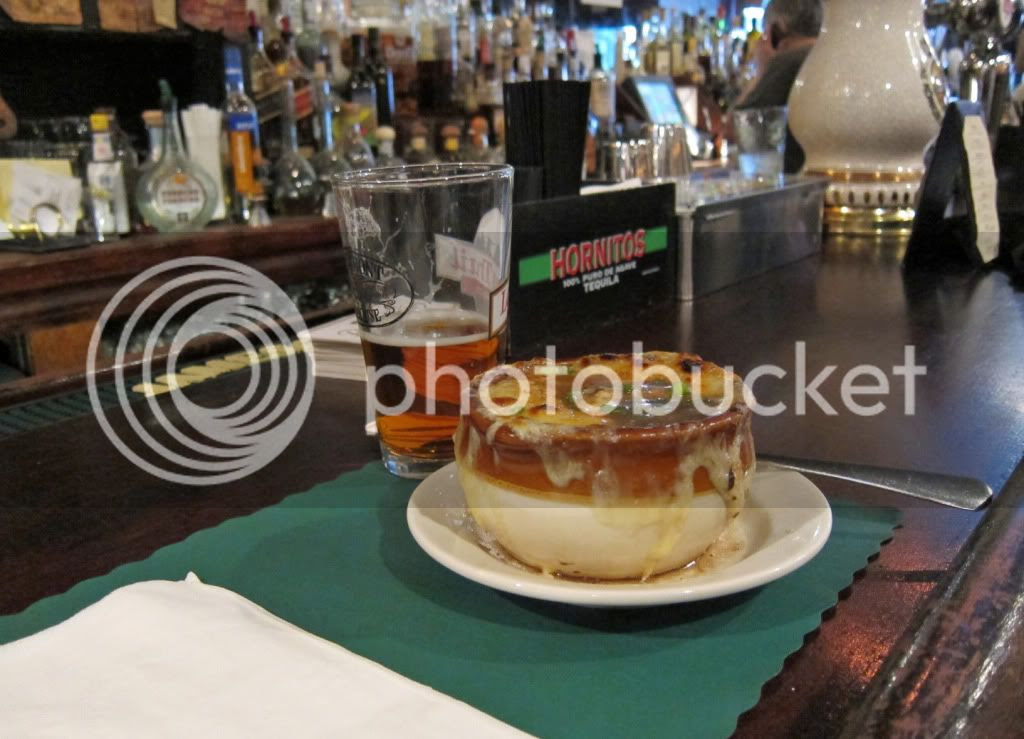 Then, when she was finished eating, she said she didn't want a Negroni because she would be too drunk to walk home. The Mysterious Chinese Woman isn't much of a drinker. Somehow I decided we would have a Negroni after we got home. So I made us up a batch.

A Classic Cocktail In A Classic Shaker 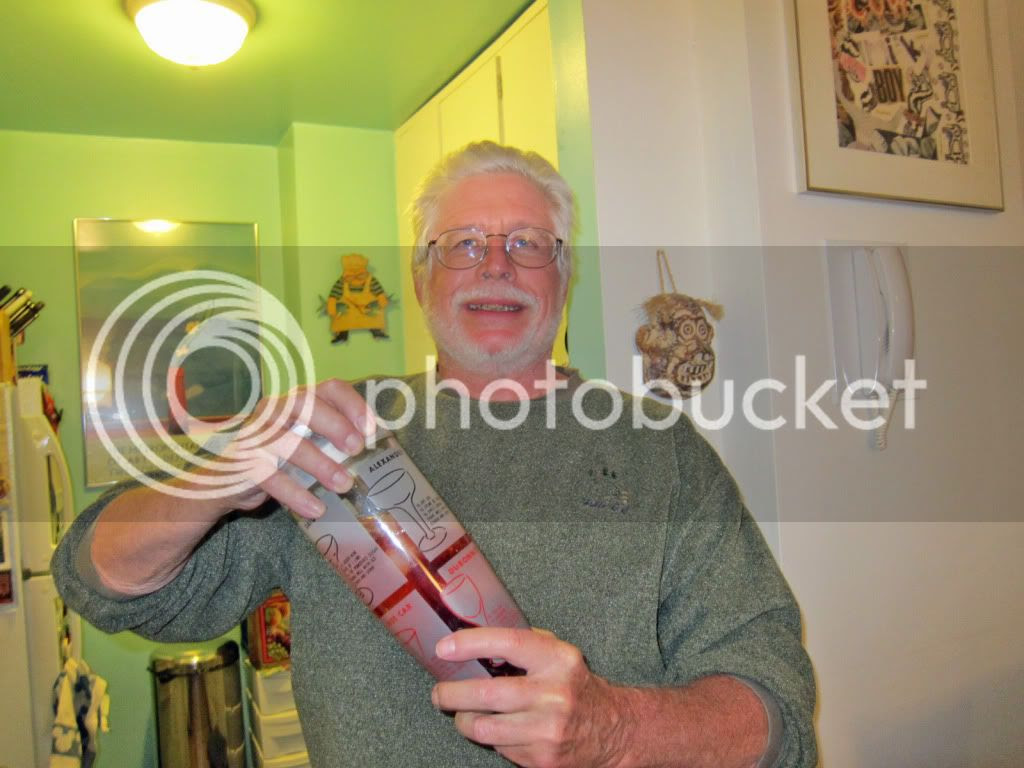 Just one-third gin (I used Blue Saphire) one-third Campari and one-third sweet Vermouth (I used Noilly Pratt). Then you just shake vigorously with a lot of ice and strain into the appropriate glasses. 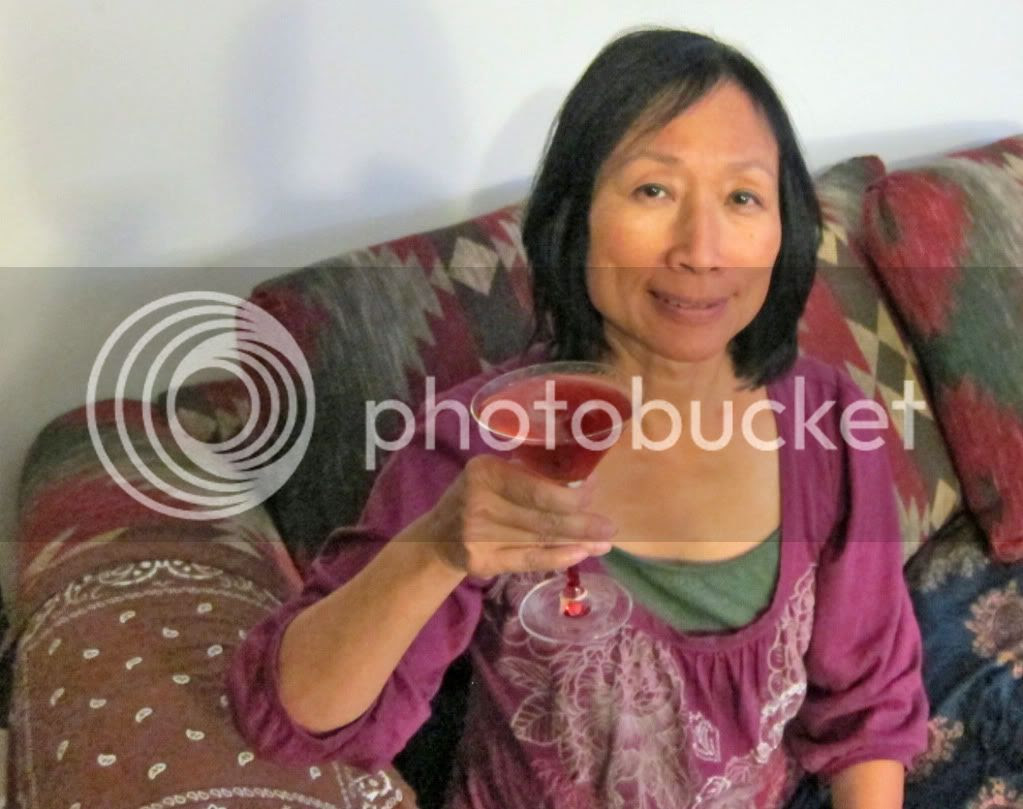 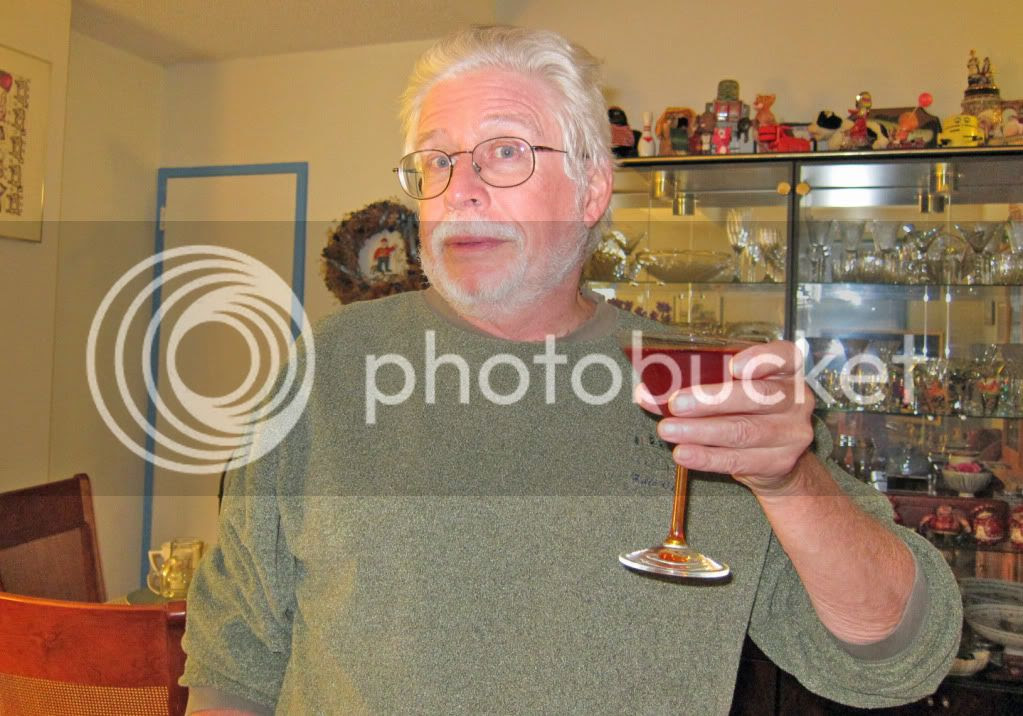 Mario Batali once said that the Negroni was the best cocktail in the world. That got me to thinking, if I could only drink one type of cocktal for the rest of my life (God forbid) which one would it be. Certainly a Negroni would be up there. I don't drink them very often but always wonder why because I do like them. But a really well made Margarita would probably be my cocktail of choice. I wonder if Gaid could make me one.

I try to explain to my friends in Puerto Vallarta how, in some ways, where I live in Brooklyn is very similar. Of course Downtown Brooklyn doesn't have the beaches (got to take a subway and go to Coney Island for that) or, for now at least, the warm weather and sunshine. But according to Conde Nast we are one of the top fifteen places in the world to visit. And the article urged travelers to check out the trendy bars, restaurants, galleries and shops. I would also strongly recommend that they check out some of the non-trendy bars as well. OH NO, maybe Waterfront Ale House is now trendy? That would help explain the rash of requests for strange cocktails, some of which I had never heard of. The only thing that I can think to make with Ginger Beer is a Dark and Stormy, which is just Ginger Beer and Rum. Montero's Bar & Grill certainly isn't trendy.
Posted by Bar Man at 10:06 AM

May Heaven forbid and forfend! A pox upon the hipsters and their ilk. May their seed fall upon stony ground and be eaten by crows.

If margaritas are your first choice, what would make your top ten? I hope that the Manhattan is in there somewhere.

Oh, ten, that give me a lot of leeway and too much to work with. These would probably make the top ten forever: Margarita, Negroni, Manhattan, Martini/Gibson, Gin and Tonic. These would probably fluctuate in and out: Stinger, Rusty Nail, Old-Fashioned, Rob Roy (A Scotch Manhattan), Scotch and Soda, Whiskey and Water, Ouzo and Orange Juice, Bloody Mary.