Nothing like stretching out your goodbyes.  In fact the night after this we had yet another farewell party with a few more friends.  But let's not get ahead of ourselves.

We went to a really lovely restaurant, El Palomar de los Gonzalez, up above the downtown area of Puerto Vallarta.  I should have taken a picture of it from the outside but was too distracted by our cabbie telling us that if we wanted to go to a titty bar we wouldn't have to pay the cab fare.  That if we spent twenty-five dollars each the titty bar would reimburse us.  I suspect that we got this offer because it was the three hombres who rode in the car together.  Lord knows what offer the women got from their driver.

The restaurant offers great views of the city and the bay beyond.  This time of year you don't get a really good view of the sunset, but you do get to see the lights come on and the city begins to twinkle after sunset.

A View Of The City And The Bay 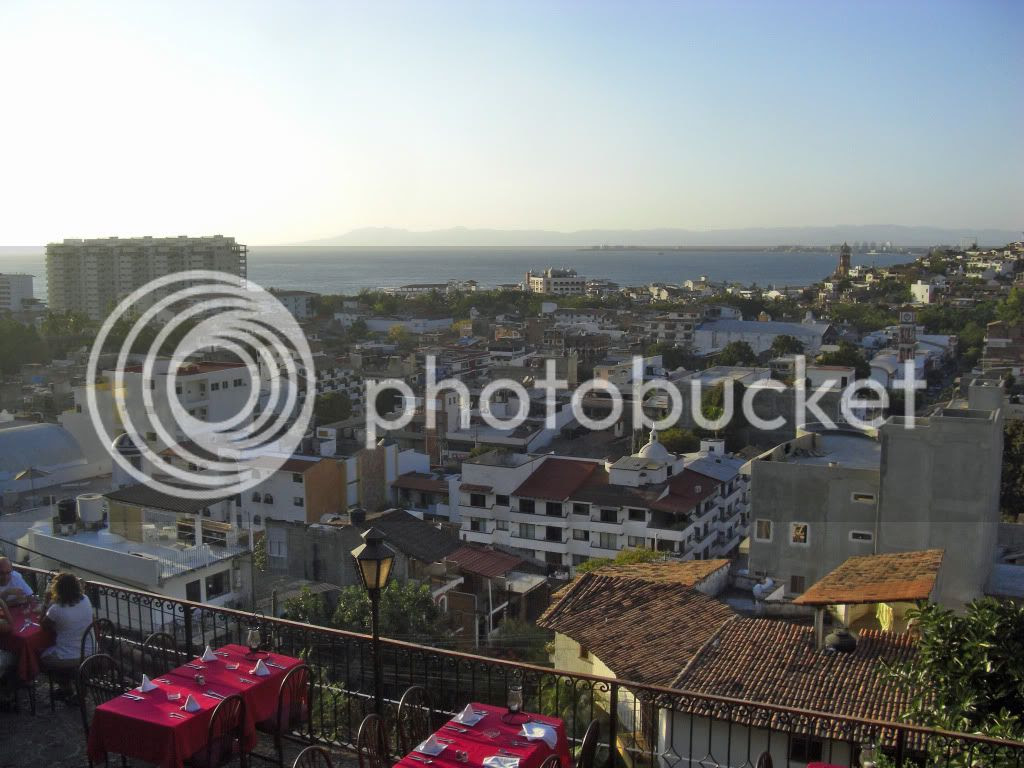 The restaurant itself has been around since 1987 and is inside of what looks to have been a very posh old-style villa.  Very elegant.

And Elegant Customers As Well 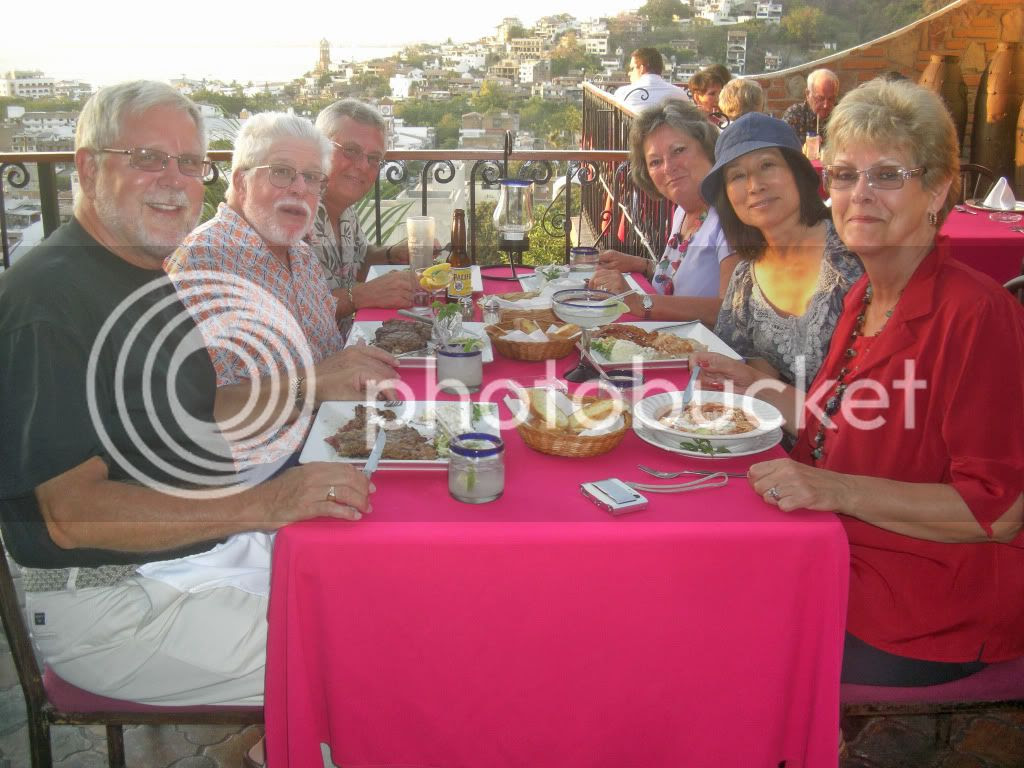 We started out with cocktails, of course.  A stiff margarita on the rocks for me.  Usually I like them straight up, but in Mexico it is generally too warm to get them that way unless you are in someplace with air-conditioning.  And we most certainly were not.

Sharon and Paul started out with a Cesare salad for two made table-side.

The Show Alone Is Worth It 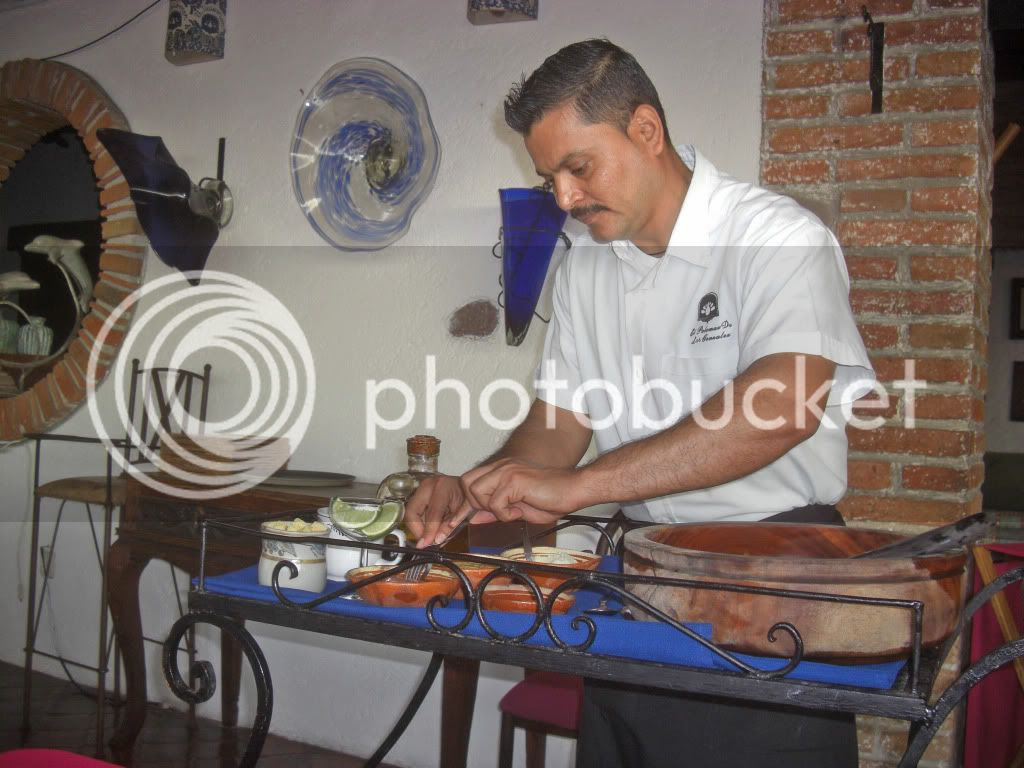 The mussels here in Puerto Vallarta are really big and juicy so I opted to share the mussels with a cheese sauce with the Mysterious Chinese Woman. 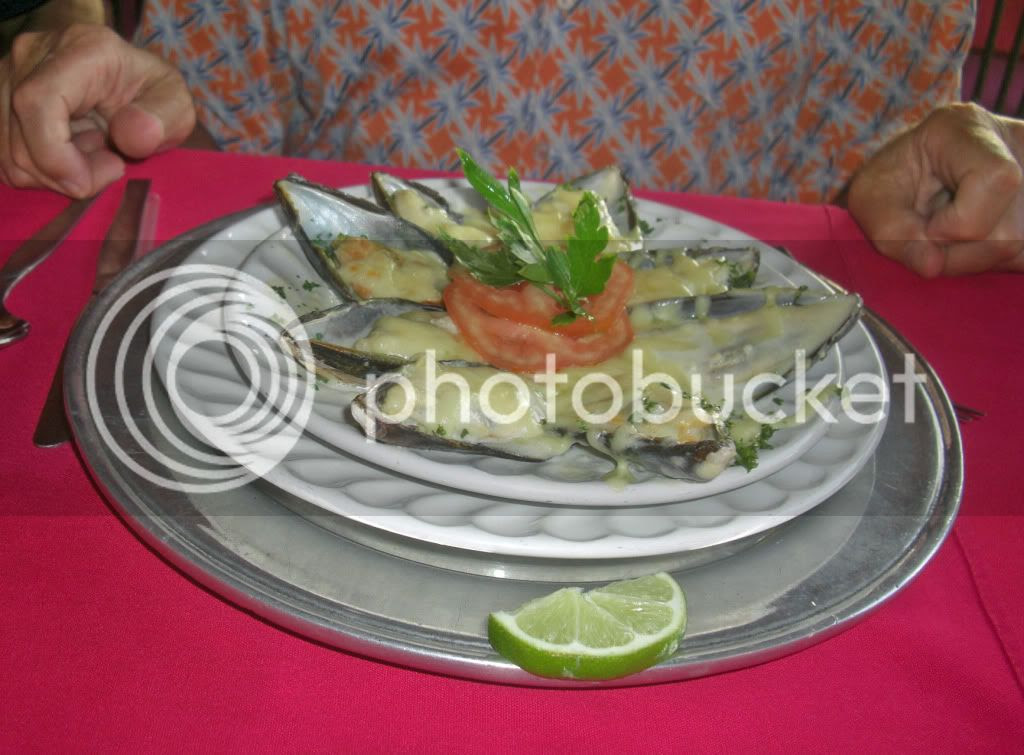 Actually, it was more like mussels with melted cheese on top, and plenty of it.  I thought the mussels could have used a bit more flavor because the dish was a bit bland for my liking.  But that is just me.  The mussels were tender and the cheese was a type that I like.

For the main course both Paul and I got the grilled rib-eyes, and they were delicious.  Done medium-rare, just like we asked for and simply prepared, just grilled with a minimum of seasoning.

Paul Thought Mine Was Bigger 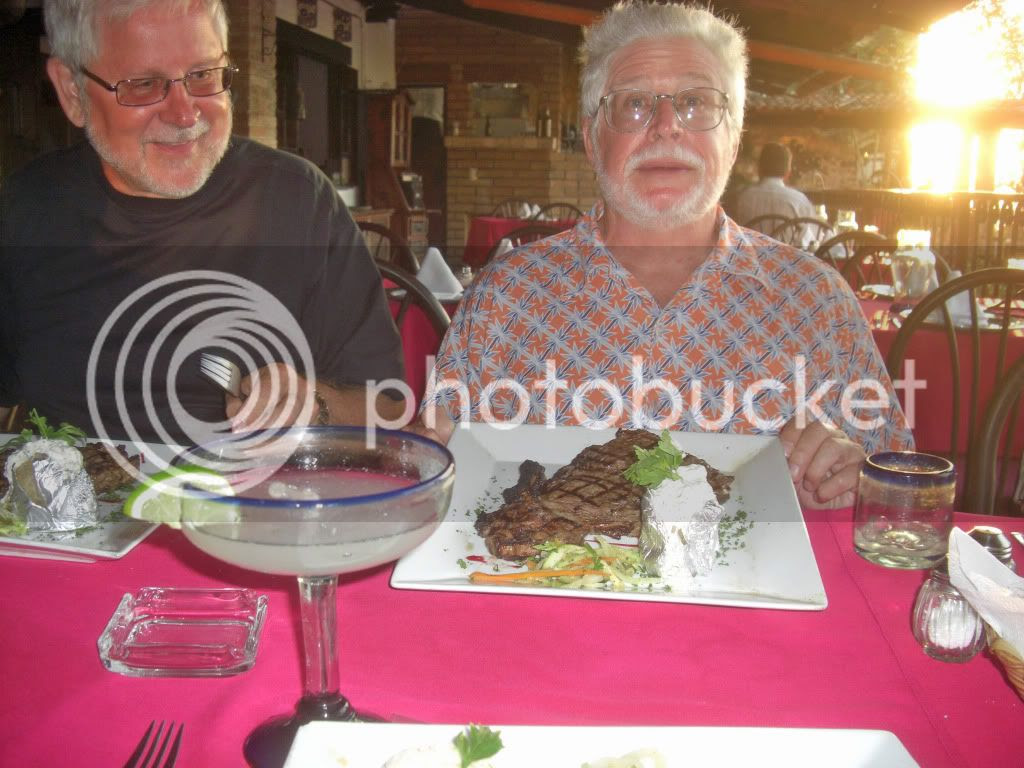 They were both plenty big.  I only managed to eat half of mine and then ate the second half cold for breakfast the next day.  Even cold it was still juicy and tender.

I am not sure what Rico ordered, it looks kind of like a chicken burrito. 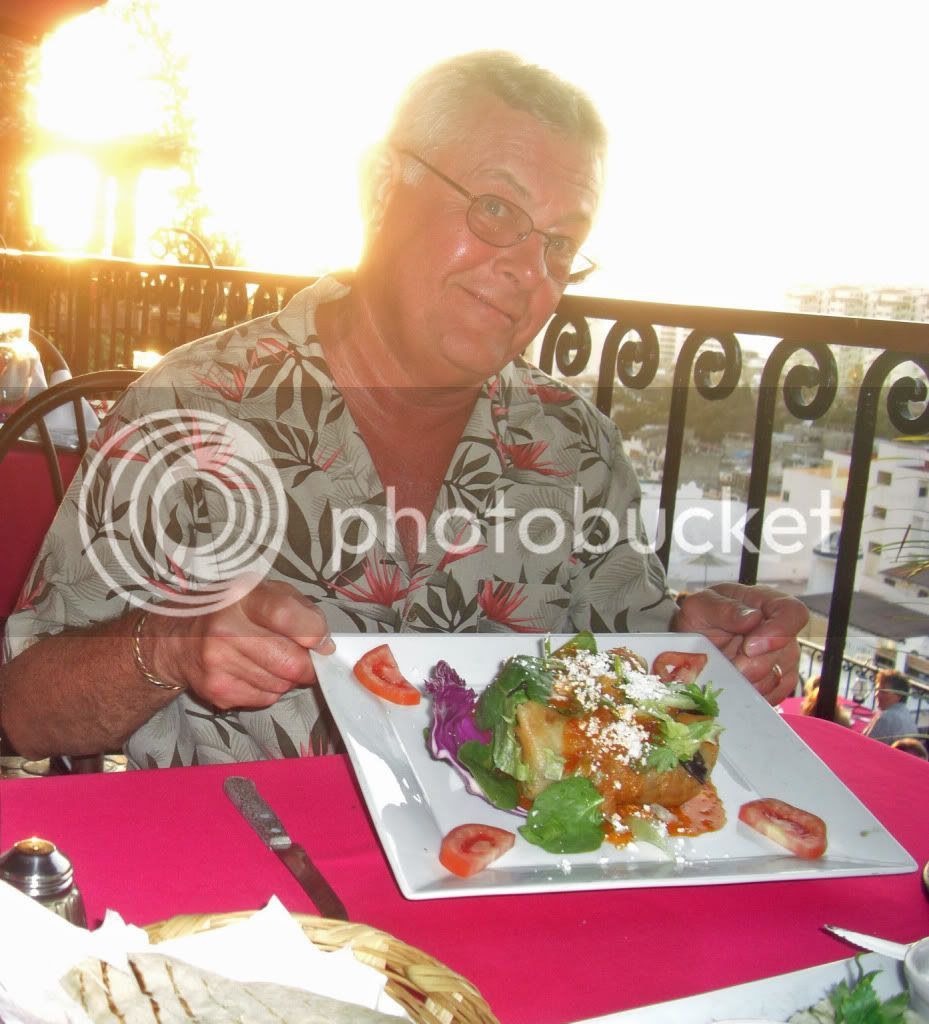 It Was Beef Fajitas For Sandy 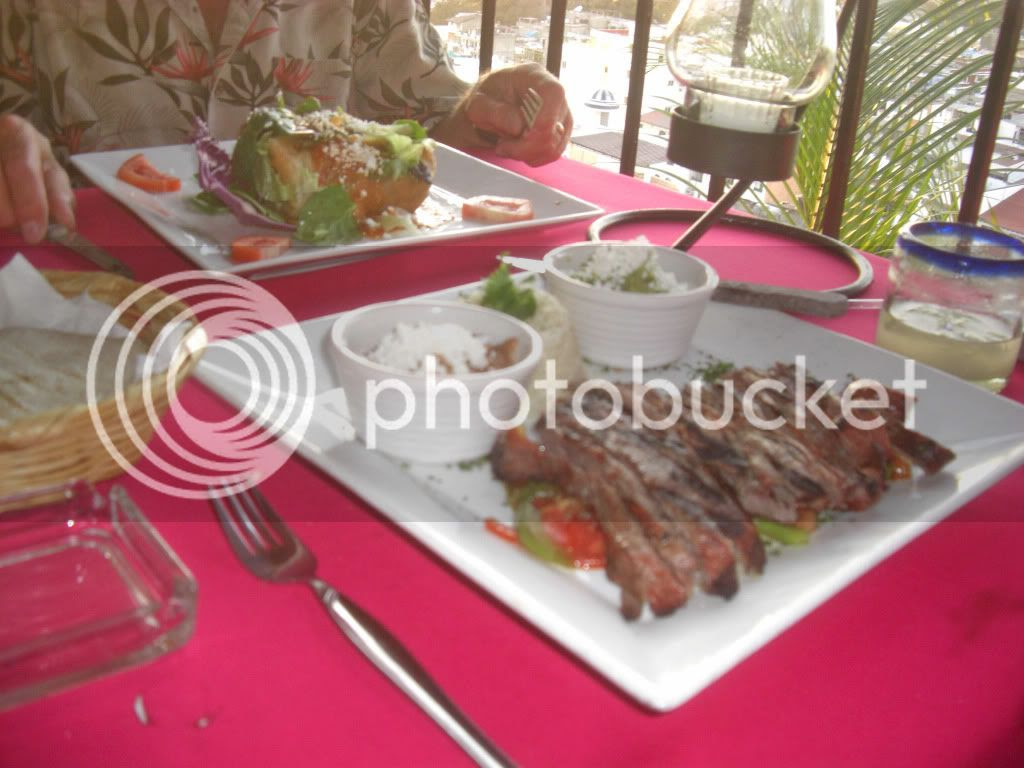 The Mysterious Chinese Woman opted for the Minoneta Shrimp, a tasty looking dish of shrimp with a chipotle sauce topped with melted cheese and bacon.  Now that is a meal that will stick to your ribs. 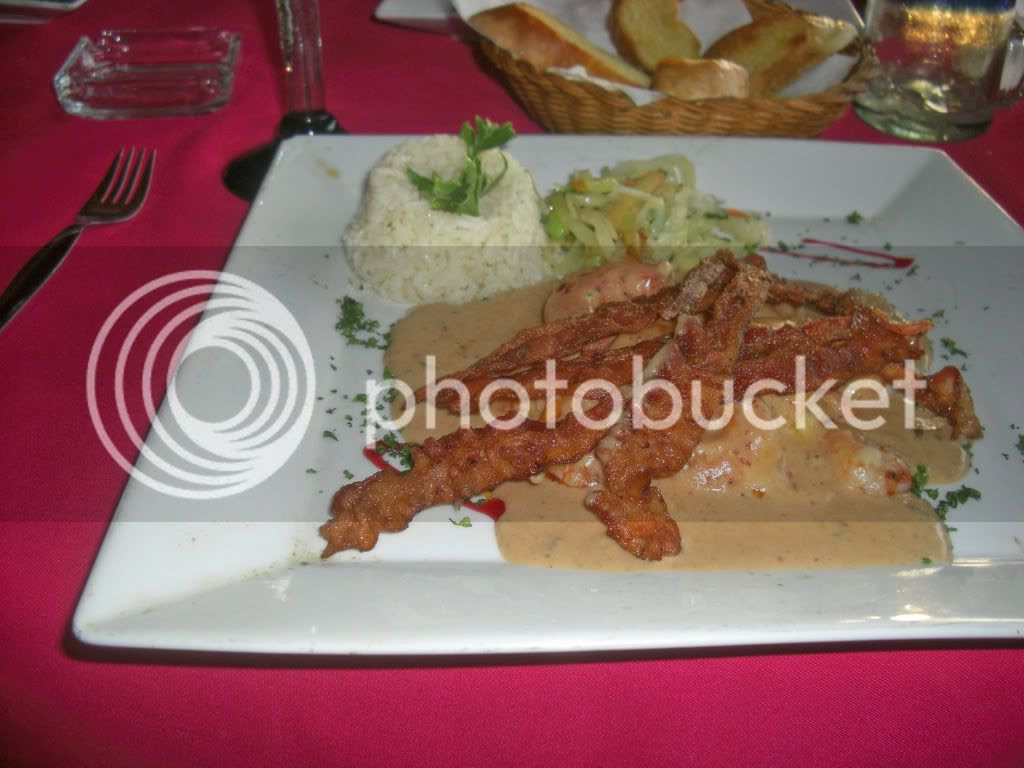 I think Sharon just had a bowl of tortilla soup and I didn't get a picture of it.  It was a pretty good-sized bowl, though and tortilla soup is very good.

We hombres consoled ourselves from having to decline the cabbie's generous offer by ordering after-dinner Palomar Coffee.  It has Brandy and Kahlua, but not topless, it is topped with ice-cream.  But we did get a bit of a show because it is prepared at the table. 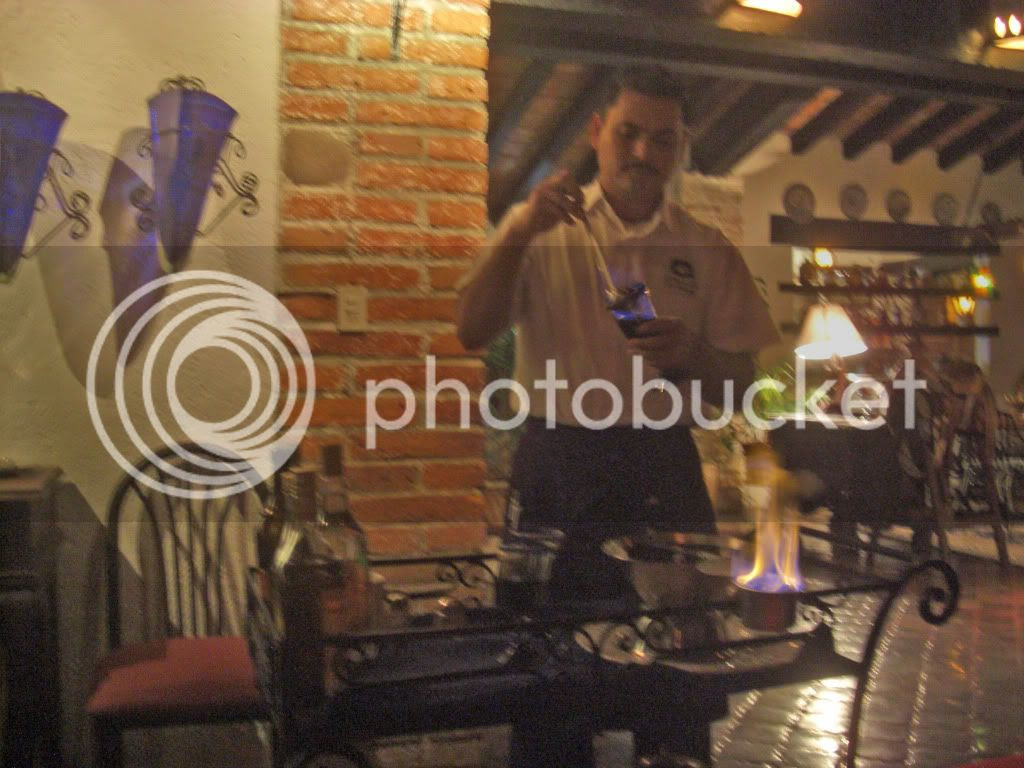 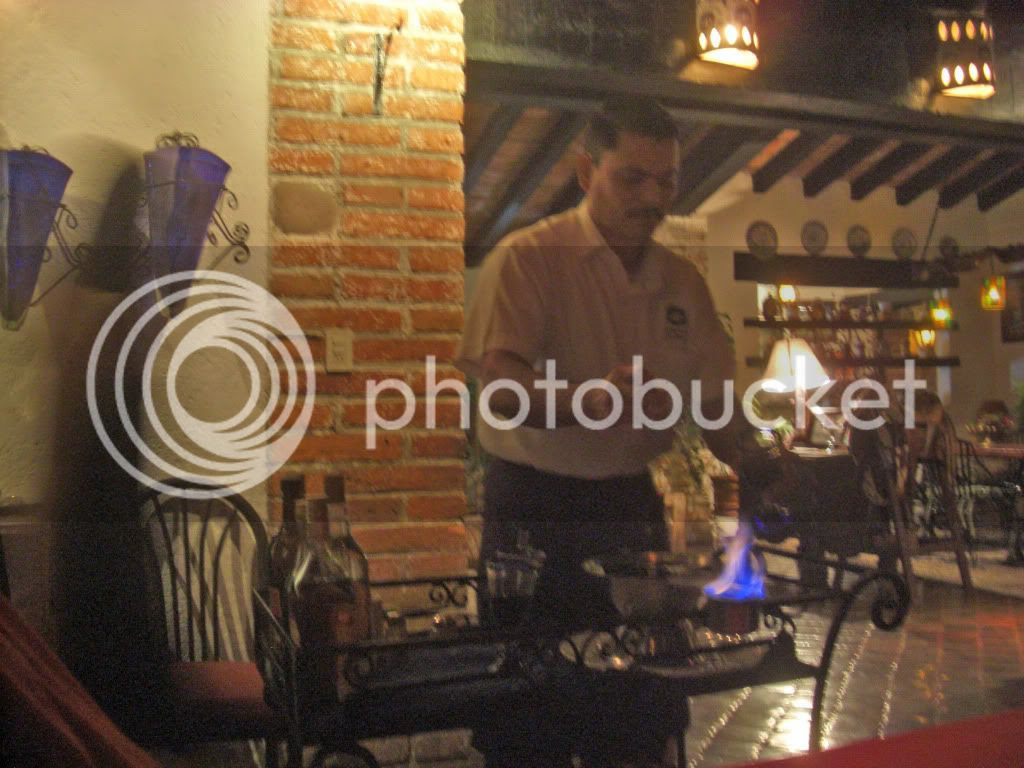 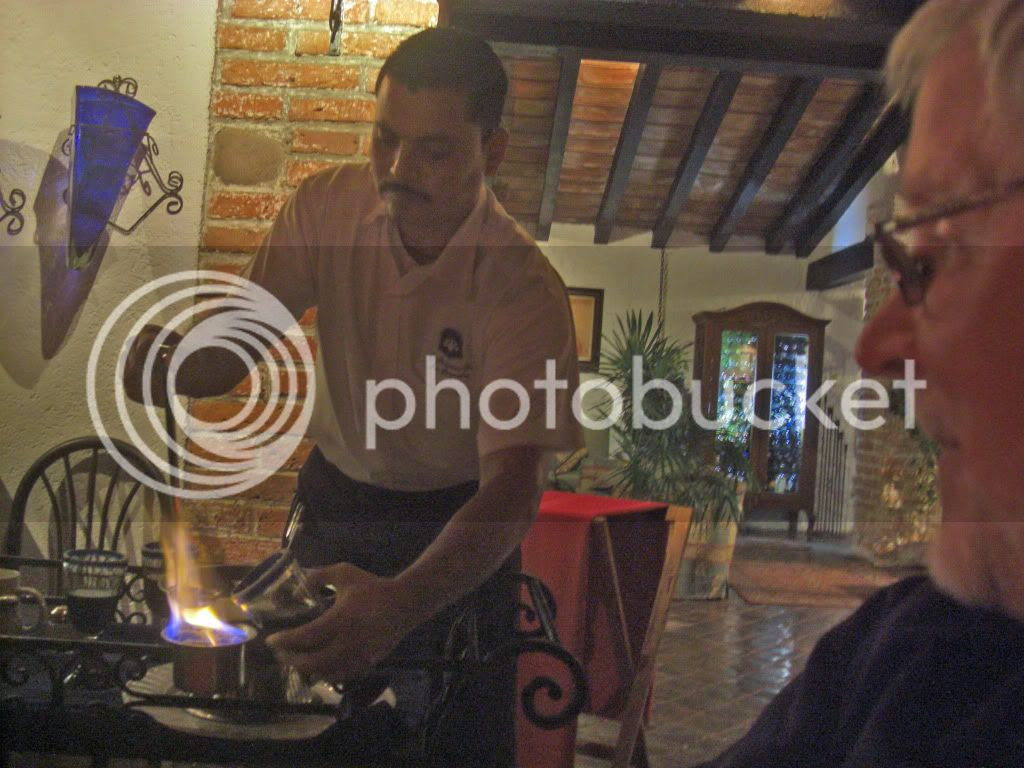 You Wouldn't Want This In Your Lap 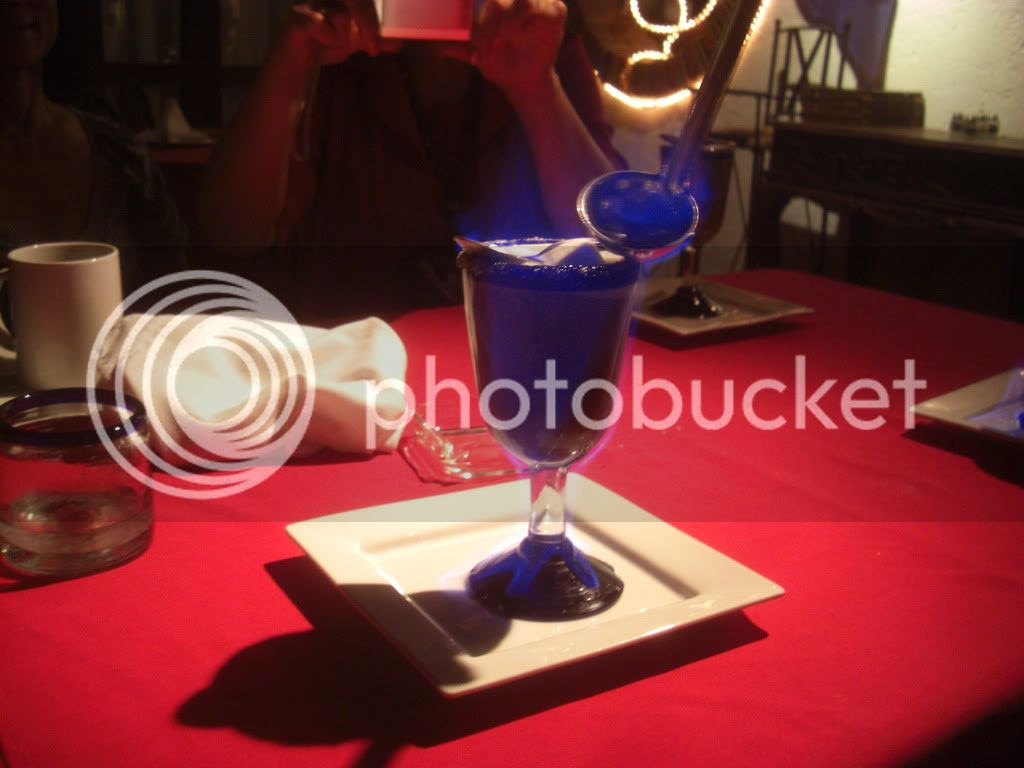 The coffee was great and it was another delicious meal with a bunch of friends.  This is the first time that I have ever been to El Palomar, but I will sure make a point of going again next year.  I have to thank my friends Ira and Linda for prodding me to go here, it is one of their favorite restaurants.
Posted by Bar Man at 6:28 PM