I have already talked about Duvel Green, a mighty fine Belgian beer that you get on draft.  Duvel in the bottle consistently ranks at the top of Belgian beers and the Green, draft only, is a mighty fine beer as well.

Okay, about the inflation.  The last time I was in Pete's Waterfront Ale House this beer was $7 for a glass.  not bad, but still a bit spendy.  And we are talking about a glass, not a pint.

Today I went in and they had it again after being out for a bit.  So, of course, I ordered one.

Spending The Green For The Green 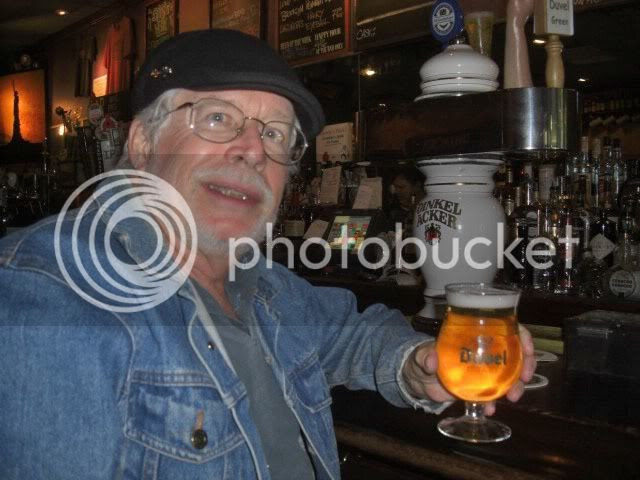 What I hadn't noticed was that the price had gone up from $7 to $9 a glass.  I took a quick glance at the chalkboard and the 9 looked enough like a 7 that I didn't notice the increase in the price.  Now, again, this is a glass and not a pint. 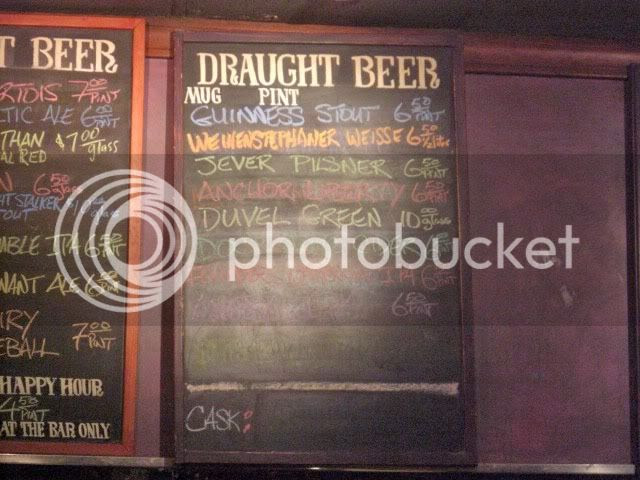 And, I have never seen the price of a beer or a drink go up while people are in the bar drinking.  Couldn't you at least wait until after the bar closes before you raise your prices?

Don't get me wrong, Pete's Waterfront Ale House, is still my favorite bar, but this is strange even by my standards.  Are we getting to the point where we have to start buying futures on beers when we walk into a bar?

I did have a nice Long Trail Coffee Stout, their Happy Hour Special., with a mighty fine rack of ribs.  Long Trail is in Vermont and they turn out a nice selection of beers.  The Coffee Stout is a seasonal and is usually only available, or at least only brewed, in February and March.  It is a heavy and dark, very dark, and does have a very discernable coffee overtone.  You can also get a hint of burnt sugar.  I saw it when I first came in but it was a warm and sunny afternoon so I wanted to start with something lighter, hence the Duvel to begin.  The Coffee Stout, a hefty 8% ABV and a good compliment to the smokey ribs.

Oh yes, the Happy Hour Special, that I think runs all day, is a beer that has been selected to sell for $4.50 if you order it at the bar.  You can, however, then take the beer to your table.  I suspect they will even bend the rules a bit and let you order it at the table, but why push your luck.

Now, I don't want to be too critical about the price of the Duvel Green, I was more taken aback by the fact that someone actually went up on the ladder and raised the price by a dollar while I was sitting at the bar drinking it.  I came out alright though, I bought two of them at the lower price (maybe it was a supply and demand thing with the price and I was the demand),  Then a fellow, Todd, who recoginized me because he follows my blog, stopped by and bought me another and had one himself.  And the bartender, Mary, did a buyback.  If it wasn't for that Weinenstephaner Weiss ($6.50) that I had to buy for the Mysterious Chinese Woman I would have gotten off fairly cheaply.

I happened to run into Alex Hall, the fellow who runs the Cask Festivals around these parts and across the pond, on the way to Pete's Waterfront Ale House and told him that I would be coming to his Cask Festival at The Brazen Head on Saturday.  He recommended that I come on Friday because he had some rare offerings that might be gone by then.  Well, I guess I will just have to make the supreme sacrifice and go both days.  Maybe Sunday as well.
Posted by Bar Man at 8:02 PM