No Hoorah For Rao's

My first night in Las Vegas was certainly a disappointment. We were staying at Ceaser's Palace and figured for our first night we would just eat at one of the many restaurants there. Rao's caught our eye because we passed it on our way to our rooms. Plus Rao's is quite famous, make that legendary, here in New York. It is located up in Harlem and only has about a dozen tables. Of those most are permanently reserved so getting to eat there is difficult if not impossible. Of course the fact that it was a favorite haunt of Frank Sinatra and his crew has just added to its allure. And, from all that I have heard, the food is excellent. 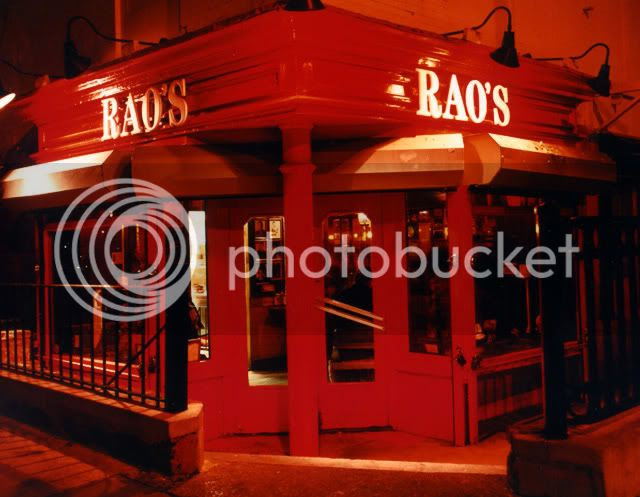 Now Las Vegas has become full of spin-off restaurants or restaurants opened by famous chefs. Bobby Flay's Mesa Grill, also in Ceaser's Palace, is another example (more on that later). And all I can say is that this was just a poor attempt to replicate a classic restaurant. When they try to build almost a model of the original, be suspicious.

The Las Vegas Rendition Of Rao's 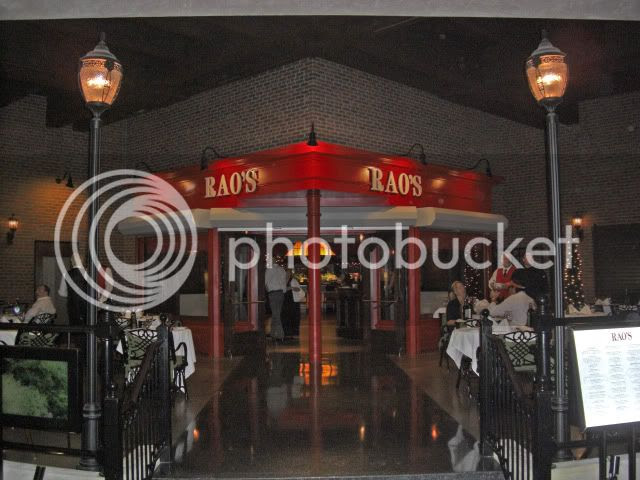 We got to Rao's about 4:30 P.M. just to check on what the reservation situation was like. The hostess said we could either eat at 5:00 P.M. when they opened for dinner or we would have to wait until 9:00 P.M. for an opening. We were running on New York time so 5:00 P.M. sounded good to us. We headed to the bar where I chatted with the bartender, got his philosophy of mixology, and he built me a very nice Margarita.

So Far, So Good 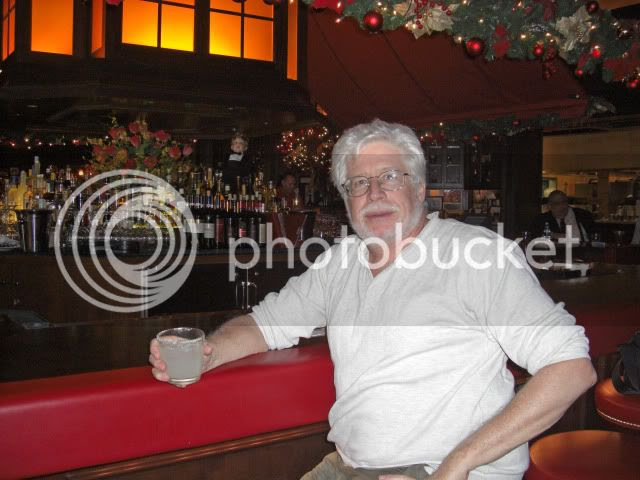 One of the rooms in the Las Vegas Rao is supposed to be an exact replica of the whole Rao's restaurant in New York. You can kind of get an idea of how small that restaurant must be. 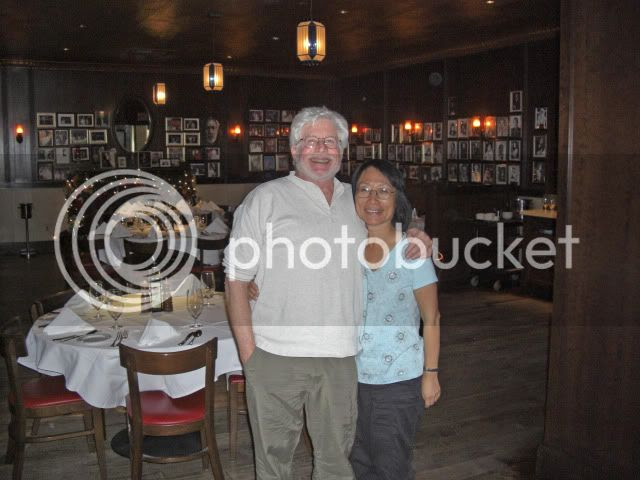 Sadly, the food here was mediocre, at best. And considering the prices and the hype it should have been nothing short of excellent. We started out with an appetizer of deep-fried seafood and, while it looked good, we both agreed we have had as good out on the boardwalk of Coney Island. 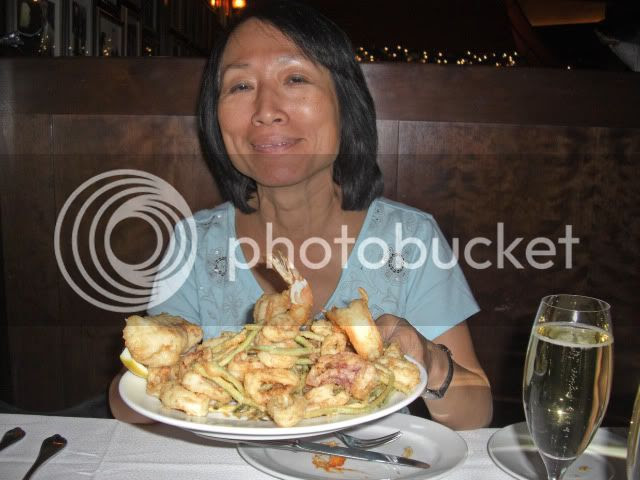 The Mysterious Chinese Woman ordered clams and linquini and it was the same story. The pasta was almost certainly not cooked fresh and they didn't even do a very good job of reheating it. Bland and over-cooked. The clams appeared to be fresh, but that should be a given. The sauce was fine, but nothing special. 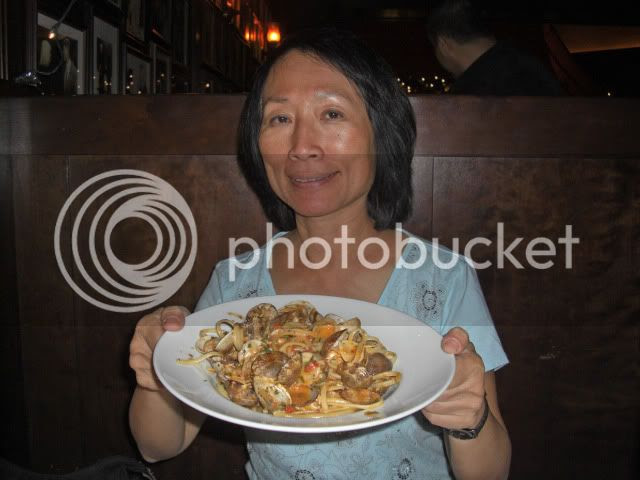 Her Expression Says It All 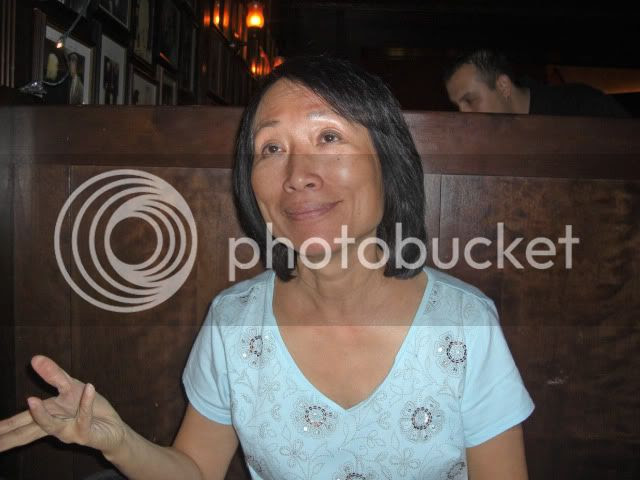 Ah well, we can always drink our troubles away. And at $12 a glass this bubbly was the cheapest wine on the menu.

Well, At Least It Is Cold 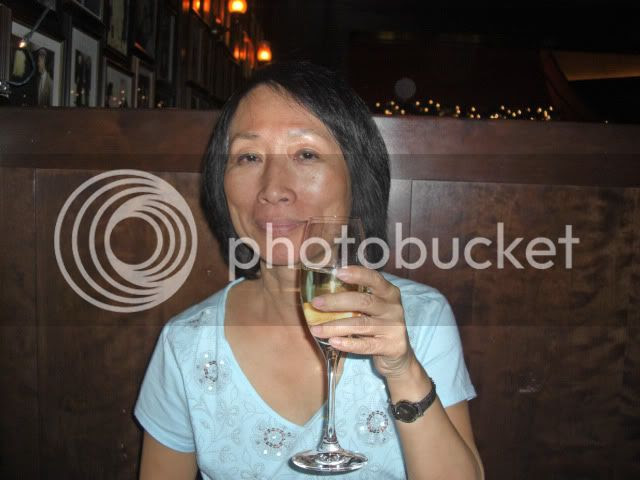 I ordered one of their specials which was monkfish wrapped in bacon. Again, very disappointing. The fish didn't taste or have the texture of monkfish at all. I wouldn't want to accuse them of misrepresenting the fish, but I don't know how you can cook a monk fish and get it to have a texture more like over-cooked cod or something. Not even cod, really, but certainly not that lobster-like texture a monkfish usually has.

The best part of the dish was the way the bacon was thinly layered over the fish and crisped on. Not hardly enough to compensate, though. The salsa or whatever that accompanied it was nice and crispy but, again, nothing special. 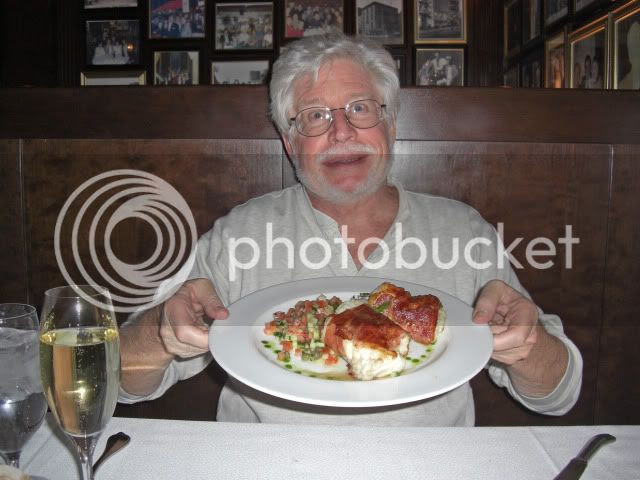 The service was very friendly and efficient, no complaints about that. However, I couldn't help but notice that when we left the place was still mostly empty. I am not sure where all of those people who would be keeping the place filled until 9:00 P.M. were. After our meal I sat at a table outside and watched the Twins game for awhile, and still no people showed up. On several other nights when I passed by (it is right on the way to our room) I also noticed that it was pretty empty, and it was the same when I stopped at the bar later in the week for another Margarita.

In short, stop in the bar for a Margarita, they are really good, but I wouldn't recommend that you go there to eat. I have to believe that the food at the Rao's in New York is much better. New Yorker's don't keep a restaurant in business very long if the food isn't any good. It would certainly have to be much better than what they served here.
Posted by Bar Man at 11:11 AM

One would wonder why the original Rao's doesn't do something about it to maintain their reputation. Might the franchise be beyond their control?

I am not sure what the problem is. By and large the food in top-end restaurants in Las Vegas is very good. The food at Bobby Flay's Mesa Grill, which I will write about later, was fantastic. And, while Rao's sat over half empty, the Mesa Grill was packed.