I woke up this morning and the idea of eating beans and rice with cheese no longer seemed too appealing. I decided on a spinach omelet instead. 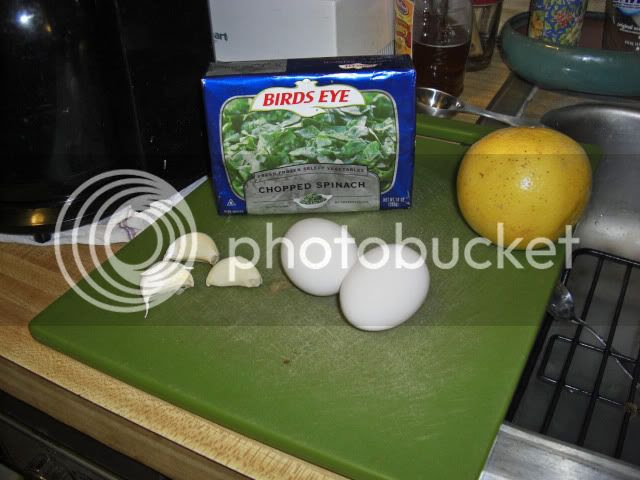 Well, the grapefruit wasn't an ingredient.

I started by slicing the garlic and then cooking it in olive oil until translucent.

I Love The Smell Of Garlic In The Morning 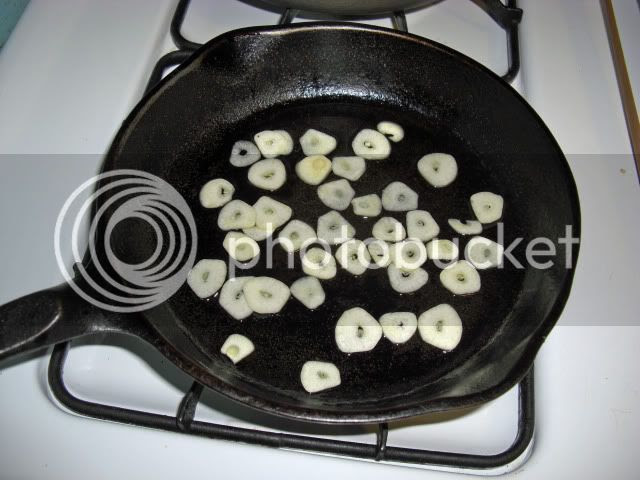 Then I dumped the package of spinach into a pot of water with a pinch of salt and brought it to a boil. 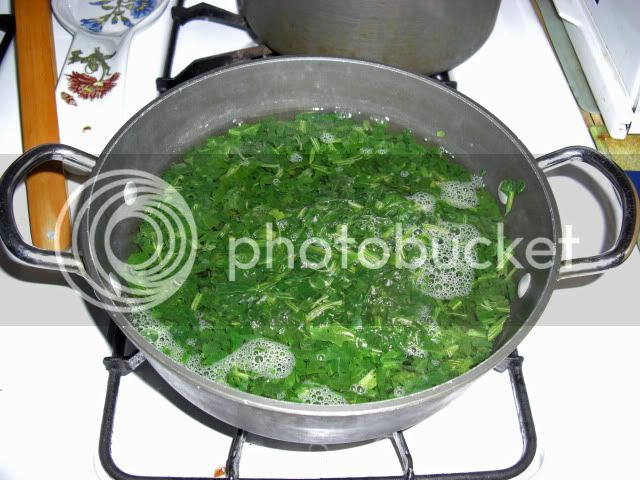 I ended up with more spinach than I could use so I just took a cup for my omelet and then saved all the rest.

Fascinating, A Cup Of Cooked Spinach 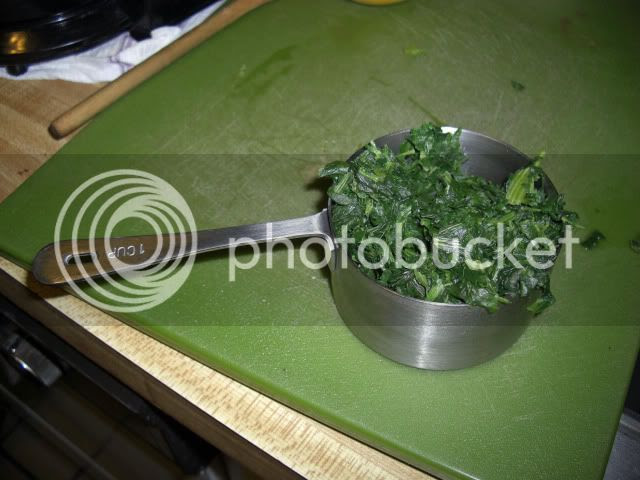 The next step was to throw the spinach on top of the garlic and then crack a couple of eggs over it. 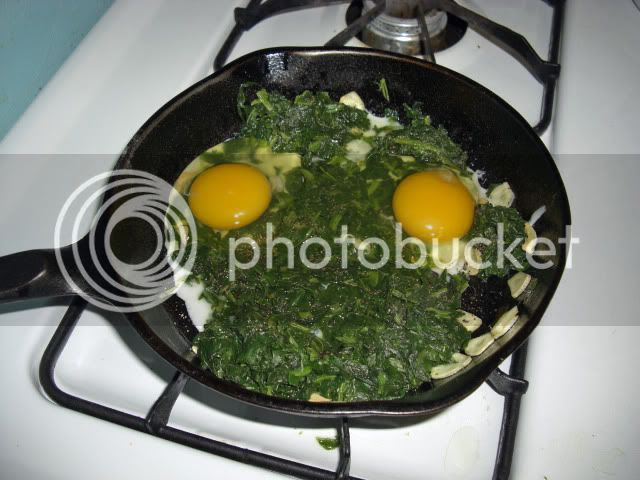 At this point I decided a little cheese would perk this up a bit. 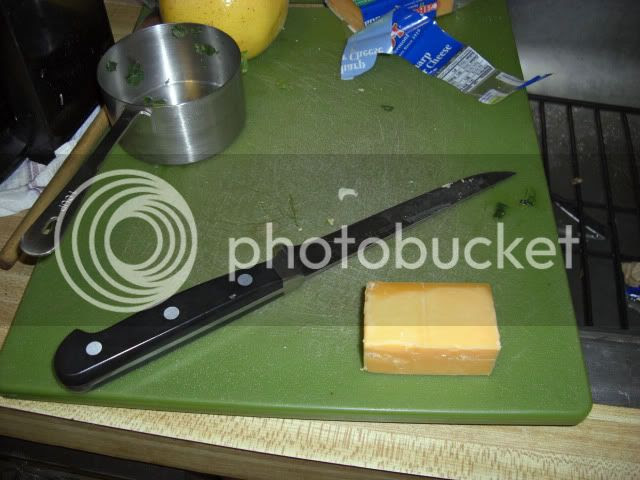 I chopped up the cheese into little chunks and then after scrambling up the eggs, garlic, and spinach I dumped the cheese on top.

Tell Me When This Gets Too Exciting 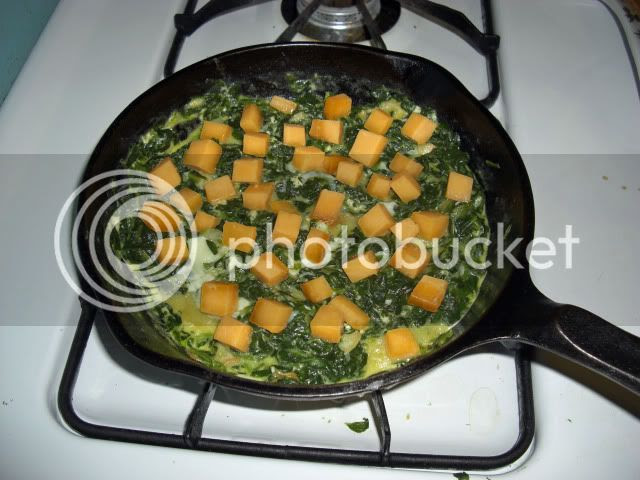 Next step was to stick the frying pan into the broiler for about two or three minutes.

Now This Is Looking Good 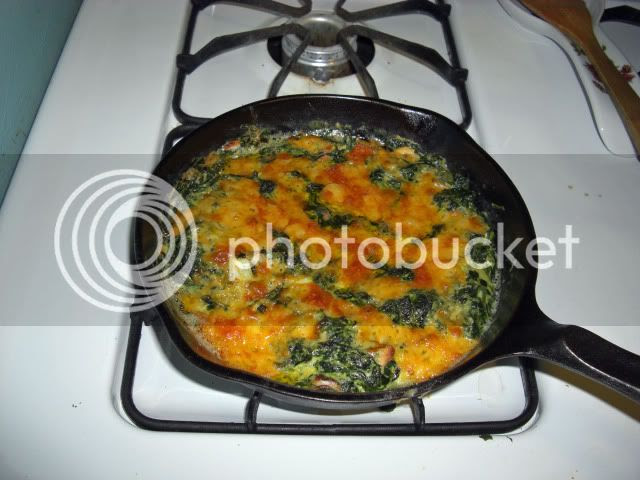 I then plated the whole thing and had a mighty fine breakfast.

Almost Too Much To Eat 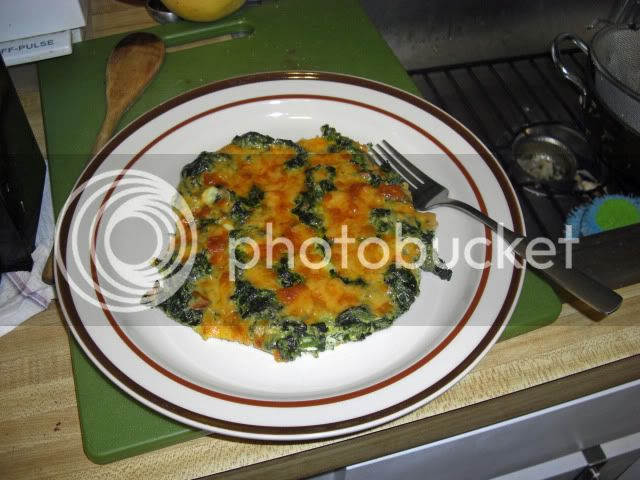 This was a very good breakfast but the next time I make it I will only use one egg and half a cup of spinach. I really was stuffed and didn't even have room for my grapefruit.

For lunch I had my usual peanut butter and banana sandwich. I decided to include a picture, but not until after I had made it. I opened it up though and, quite frankly, it doesn't look quite as appetizing. In fact, for some reason, it reminded me of a dirty diaper. 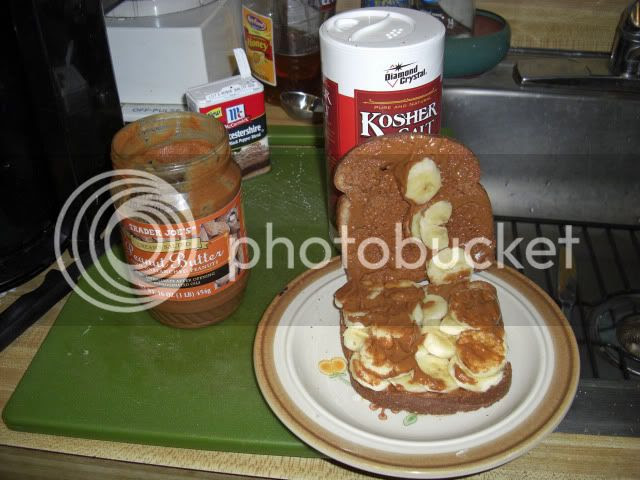 As promised, today I cooked the pork shoulder. First, I just seasoned it with salt and pepper. 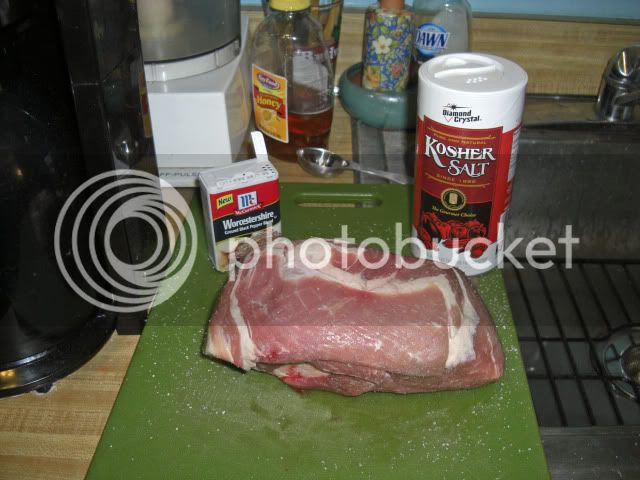 Next I browned it in the smaller of my two cast iron dutch ovens. 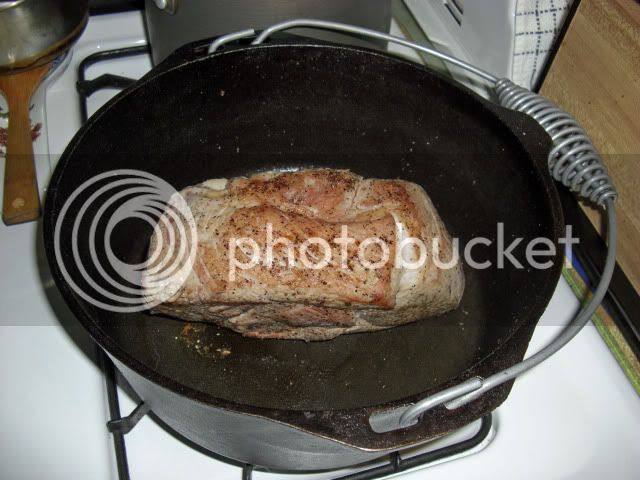 After browning I threw in half an onion and a few cloves of garlic and then stuck it into the oven for a few hours. I had the oven set at 225 F.

When I took it out it looked like this: 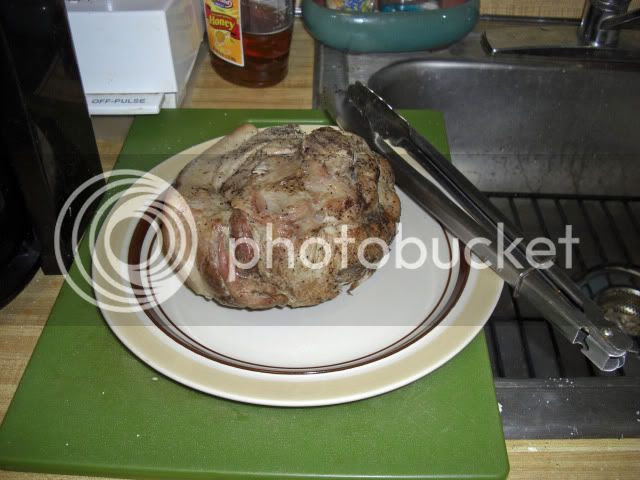 I cut off a couple of slices that I thought approximated a serving of meat.

About The Size Of A Couple Of Decks Of Cards 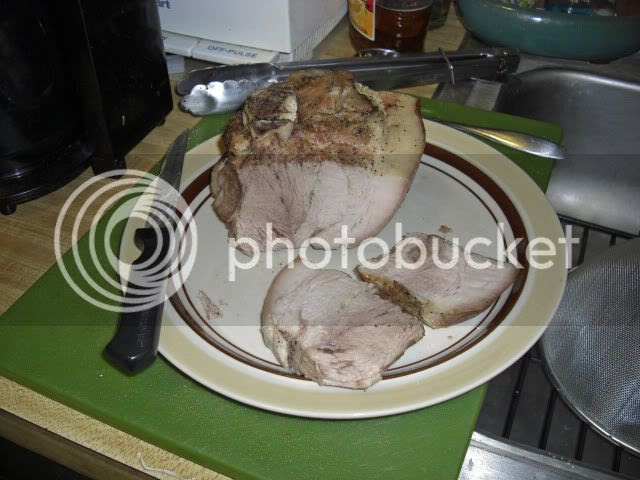 Then I cubed it. 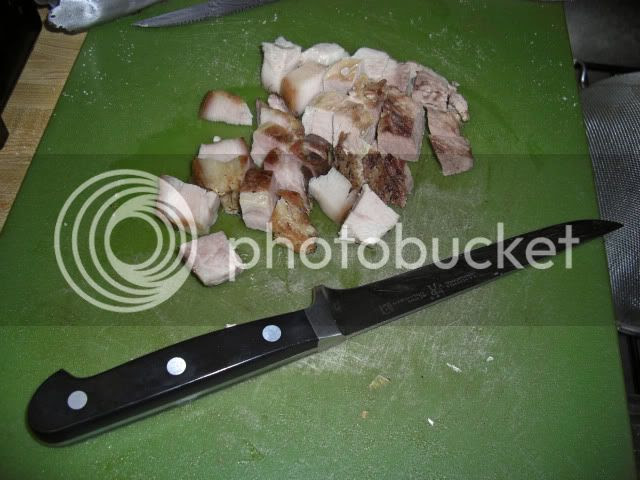 I couldn't avoid the rice and beans forever so I simply heated them in the microwave with a handful of broccoli and then added the pork. I ended up with a tasty and filling dinner.

Rice And Beans, A Variation 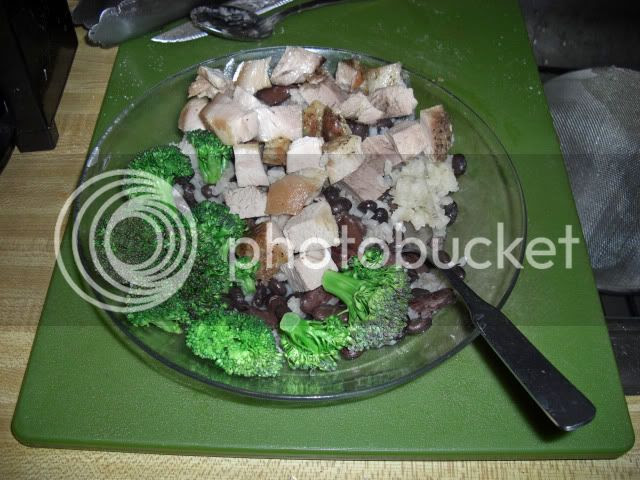 This is what was left after I took the pork shoulder out of the dutch oven. 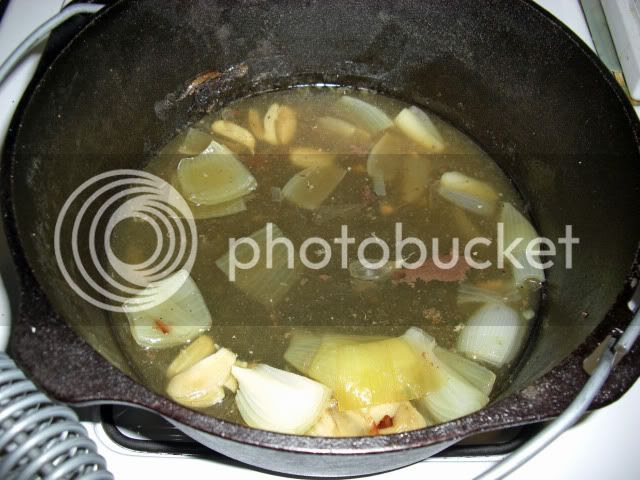 Being of the waste not want not mentality, I poured the stuff through a sieve and then poured it into a plastic container. 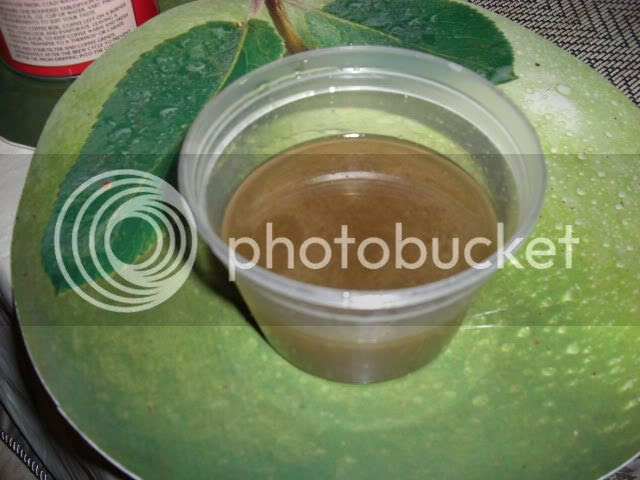 I figure I will use it to add a little flavor the next time I cook up some rice, and to get some grease into my system.

Tomorrow I am going to cook up some pasta for dinner. I think I can do without rice and beans for a day or two. Seeing as how I have plenty of the pork shoulder left I will incorporate that into the sauce, somehow.

Oh, I finally had my grapefruit as an after dinner snack.

For those of you who might be concerned that I am eating too many eggs, I think I will buy some oatmeal and begin incorporating that into my breakfast routine. Maybe get a package of raisins and some almonds to mix in.
Posted by Bar Man at 5:54 PM