Not A Good Tourist

Not only is Bar Man not a very good tourist, he is even worse when it comes to writing about touristy things. I do have some pictures of the touristy places where we went, like the Sistine Chapel. Well, actually, not the inside of the Sistine Chapel itself, but the building that surrounds it. But what can I write about it that hasn't been written before. Oh, except that you can no longer take pictures inside the Chapel itself because of a deal that was made with a Japanese company. In exchange for funding the cleaning and restoration of the Sistine Chapel they got the rights to sell all of the souvenirs, postcards, calendars, reproductions of statues, body parts of deceased saints, the usual. They then mandated a no picture taking policy in the Sistine Chapel itself so that it would increase the sale of said souvenirs. Hey, you want a picture, buy it.

Anyway, I am not good at taking pictures and writing about stuff in museums, even things that I found interesting at the time. I might stuff a couple of those into a future blog though.

Into our second day my opinion of Rome was still one of historical sights and tourist attractions, some of which were built around something historical. Well, in Rome I guess just about everything is historical. They can't even build a subway because they keep digging up antiquities. Then they have to stop construction until a team of archaeologists spends a couple of years sifting through the rubble.

One thing that there are a lot of are open squares, usually with a statue or something in the middle. 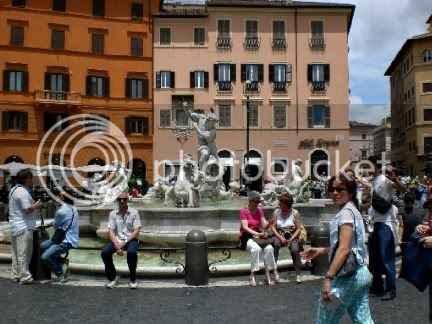 Of course this is prime real estate because these things are to tourists as roach motels are to, well, roaches. Tourists are just drawn to them and once inside they get stuck.

You Can Check Out, But You Can Never Leave 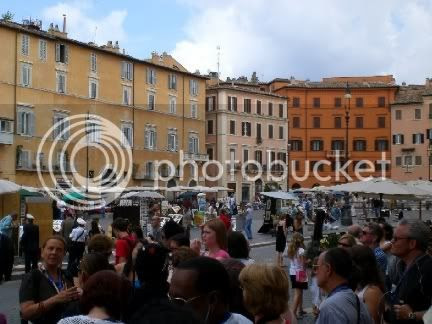 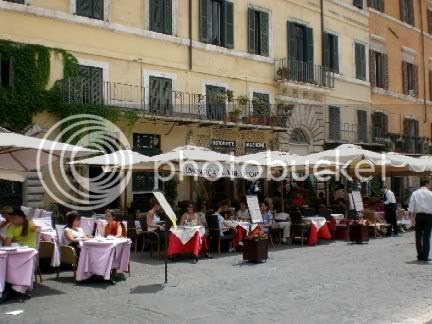 Bar Man isn't adverse to being part of the touristy action though. And after visiting the Sistine Chapel and some other place that has a big hole in the top and a bunch of little ones in the floor, I ended up here as well.

Big Hole In The Top 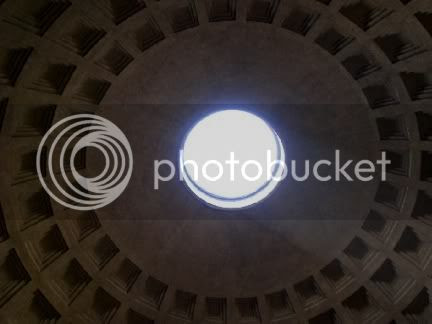 Little Ones In The Floor 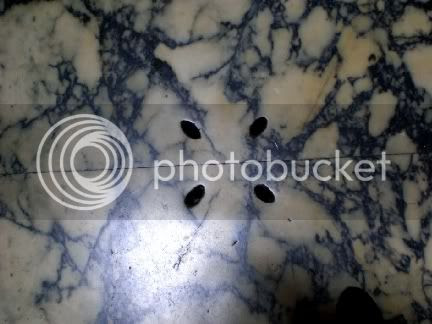 Okay, now this is a real famous place, the one with the holes, so if you know what it is or want to take a guess, post a comment. All will be revealed in the next post, but don't expect too many pictures.

Anyway, after a morning of guided sight-seeing we were let loose. The Mysterious Chinese Woman and her Equally Mysterious Sister decided to go shopping so I followed my basic roach-like instincts.

Hey, What's Bad About This 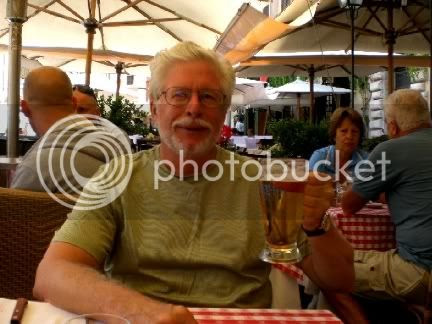 I managed to get a couple beers down before the women-folk showed up. We decided to get a bite to eat as long as we were here. Believe me, this wasn't my idea. I wanted to hunt for something a bit more authentic but was over-ruled. We ended up getting a couple of pizza's that were okay, at best. The Equally Mysterious Sister got a stomach ache later in the afternoon though, and she wasn't able to join us for dinner at, as it turned out, another touristy place.

But that will have to wait until tomorrow.
Posted by Bar Man at 7:03 PM

Cool building, huh? That hole in the top is very familiar- I've got a similar it as my Windows wallpaper at this very moment. I'd forgotten the little holes in the floor, though.

Well, let's just say it's the temple to All The Gods.

"similar picture of it"