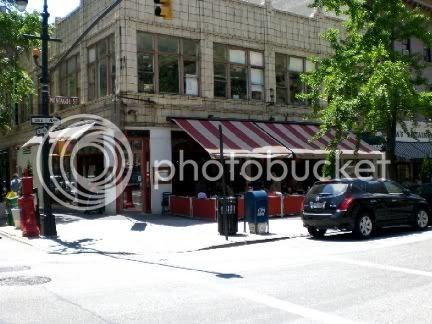 It was a nice a nice sunny day so we figured we would sit outside, just like they do in Europe. We are just so cosmopolitan, but not like that overly sweet, overly hyped, pink drink. Ah, but I am too harsh. You can get a good Cosmopolitan if you have a decent bartender. Sadly, Sex And The City has made them so popular that they are not only over-priced, they are now churned out by the bucket-full by people who don't really know what they are doing. I guess that is okay though, most of them are drunk by people who prefer their margaritas made with a mix.

But, I digress. As usual, I like to at least order my drink at the bar where I can watch it being made and enjoy my first few sips in a familiar setting.

Bar Man At The Bar 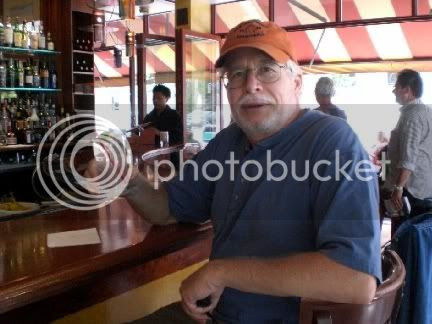 I opted for a Tanqueray and Tonic and it was nicely made indeed. By that I meant it was strong enough so that I didn't really need more than one. Well, that didn't mean I wouldn't have more than one, though.

We moved outside and took a peek at the menu. Lot's of good stuff. I had a hard time deciding but I opted for one of their daily specials, a grilled pastrami sandwich. But this wasn't just any old grilled pastrami sandwich. The grilled pastrami was on a nice multi-grain bread with cranberry and tarragon aioli, caramelized onions, grilled tomatoes, arugula, and Swiss cheese. It sounded kind of bizarre, but it intrigued me. I figured I better get it because I might never see it on their menu again.

It was surprisingly good. Everything was well balanced. I guess it was a takeoff on the classic Grilled Reuben. Now that I think about it, I guess this was to a Grilled Reuben like a Cosmopolitan is to a Martini. But a Cosmopolitan made by a really good bartender using fresh ingredients. The sandwich was served with a side of fries that were thin and crispy and quite good. 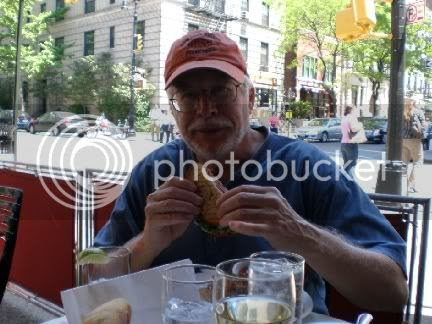 The other item on the menu that intrigued me was a Texas meatloaf sandwich. This featured meatloaf wrapped in bacon which sounds decadently delicious. This is on their regular menu though so I will be making a trip back shortly to try it.

The Mysterious Chinese Woman had a sesame crusted salmon and tuna salad that was served with marinated vegetable sprouts and mesclun greens with a wasabi vinaigrette. It certainly looked good and apparently tasted good too. At least the plate was cleaned.

We also got a nice bread basket with both bread and rolls. They weren't served hot, but the they were tasty nonetheless.

I found the bartender to be pleasant although too busy to talk much. There was just one and he had a lunch crowd to contend with. The service was prompt and courteous and our waitress was very nice. She was the one that suggested I get the grilled pastrami sandwich because, she said, the specials were always good and the Texas Meatloaf was always available.

Now that Amando's is no more I will probably visit here more often than I have in the past. Damn, now I can't get that Texas Meatloaf out of my mind.