A Tisket, A Tasket, A Cask, It Is Better

Another three day Cask Festival is about to be held at The Brazen Head, and this one I will not miss.

"You Get A Decent Enough Do At The Brazen Head" 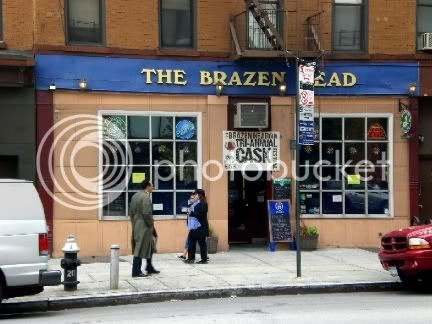 That quote is from James Joyce who used to hang out in a pub in Ireland named The Brazen Head. 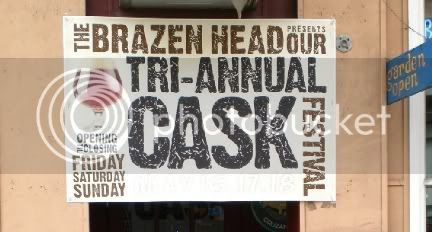 The Cask Festivals at The Brazen Head are always a joyous affair. Luckily I live close enough so that if I am in town I can easily make all three days. And I fully intend to because that is the only way you will be able to sample all of the offerings. Actually, even three days isn't really enough. They will have 25 different cask ales and lagers over the three days with at least eleven on any given day. 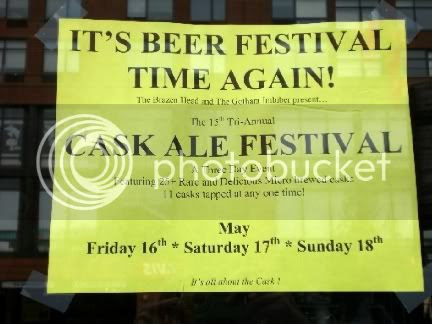 What I also like about this festival is that you don't get little sippy cups. You buy your beers by the pint or a smaller glass, eight or twelve ounces I believe. To fully taste a beer you need to drink at least this amount. And no spitting allowed.

The Brazen Head always have a couple of cask offerings so I got an early jump on the festival by having a Chelsea Hop Angel.

An Angel, Miriam, Pulling Me An Angel 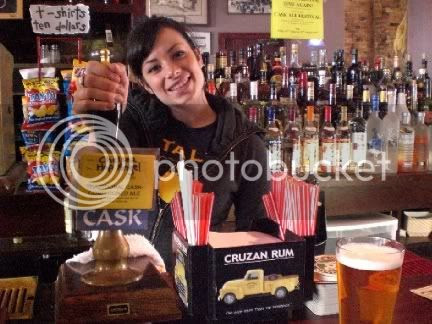 And Bar Man Enjoying His Angel 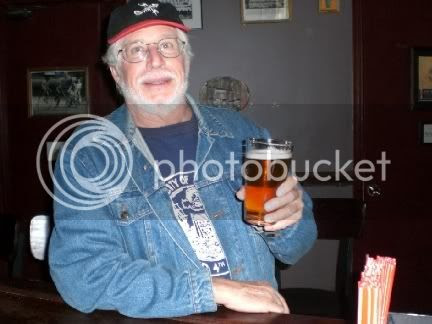 The Hop Angel is an IPA and comes in at a decent 7% alcohol. It pours a nice golden color with a frothy head that doesn't stick around too long. There is a nice citrus nose to it and just a bit to the taste as well. The hops are there, but not overwhelming like in so many IPAs these days. I could easily go through a bunch of these on a hot summer day. Sadly it was a chilly, overcast and damp day so I only had the one.

There is a little outdoor area in the back that I am sure will be packed during the festival.

Perfect Place For A Pint 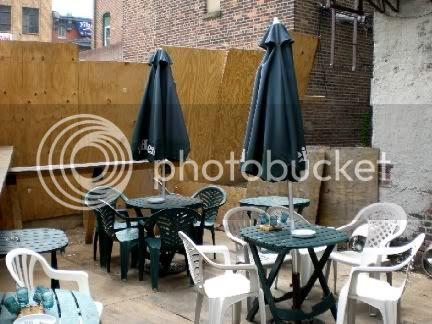 I noticed that they were hauling in cement and tiles today so I think they are going to upgrade the patio in time for the festival.

There was another big sign announcing the festival on the plywood wall out back. You can see that the dates have been changed. They were originally going to have it next week but someone decided that maybe having it on Mother's Day wasn't the best idea. I am glad they changed it because I will be in Minnesota that weekend for the opening of fishing. 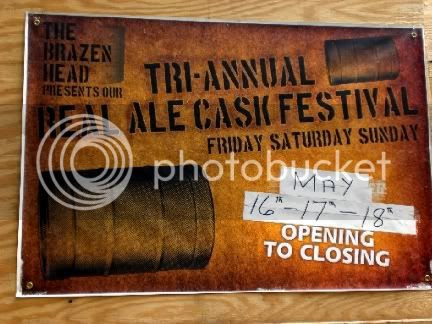 I would encourage you to show up early for this because by mid-afternoon many of the beers and ales will be gone.
Posted by Bar Man at 10:20 AM

I love your blog. I work in NYC and may have to join you on your Manhattan bar conquest. Please check out my blogs as well at:
'http://yougoaheadandkeeponbelievingthat.blogspot.com/'. Tuesday word game is a big hit and our 'Peachfest' is coming soon.
Keep on drinkin'!
- The Mountain Cat