Nothing infuriates Bar Man like shoddy reporting, particularly when it is on a subject dear to my heart, like bars, or beer, or drinking. This is a classic:

A Brewery, I Don't Think So 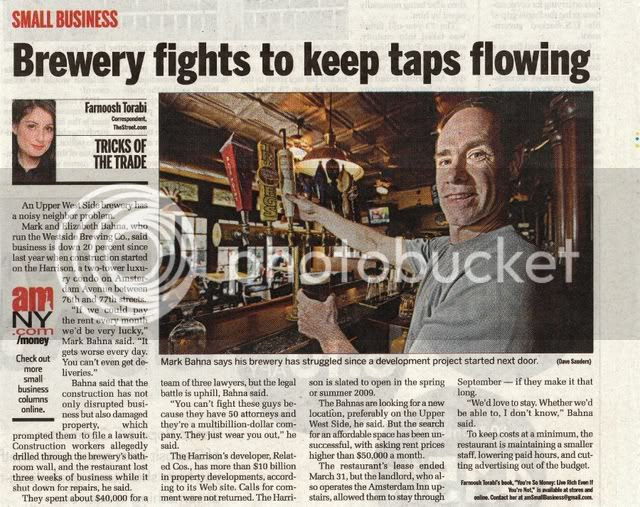 This article by Farnoosh Torabi appeared in Monday's edition of am New York, a free publication that is worth every penny of its price. Actually I am being a bit harsh. I read it on a daily basis although I have to say it is a pretty light read. Good to grab when you are getting on a subway though.

But I digress. The headline of this article might lead you to believe it will be about a brewery. I know, I am probably being a bit naive. But then the first line of the article is "An Upper West Side brewery has a noisy neighbor problem." And the caption of the picture is "Mark Bahna says his brewery has struggled since a development project started next door."

Personally, I don't think Mr. Bahna actually said that. Although the restaurant and bar that is being talked about is named Westside Brewing Co., no brewing actually takes place there. At one time, long ago, it may have been a brew pub (which is different than a brewery, by the way) but it hasn't been for many a year. You would think a reporter might have noticed the absence of any brewing equipment. The last time I was there they didn't even pretend to brew any beer, serving no beers that even carried their name.

Of course Ms. Torabi probably thinks the Heartland Brewery chain is made up of brew pubs as well. None of Heartland's locations have brewed a drop on their premises for many a year either, not since they expanded beyond two locations and decided it was more efficient (read that as cheaper) to brew their beers off-site and have them delivered. I will cut Heartland some slack here, they also claim that they have better quality control since they consolidated the brewing. And for awhile, maybe still, they had their brewmaster continue to do the brewing. Now don't get me wrong, Heartland still serves mighty good beers brewed to their specifications, they are just no longer brew pubs. Westside Brewery doesn't even bother with that.

You can go to Rocky Sullivan's in Red Hook and get beers fresh from the Six Point Brewery next door. And, by the way, I don't believe breweries, unlike brew pubs, are allowed to sell their beer for consumption on their premises. I am not sure what kind of an arrangement Chelsea Brewery in Manhattan has, but next door to the brewery proper is a great bar and restaurant where you can get their beers on draft. And mighty good beers they are too. As are the offerings from Six Point.
Posted by Bar Man at 11:04 AM