Ribs And Beer, Some Of My Favorite Things

Last night I had a hankering for some barbecued ribs and so headed to one of my favorite bars, Pete's Waterfront Ale House.

Now I know that good bar etiquette suggests that you should know what you want when you belly up to a bar so as not to waste the bartender's time. I try to make a habit of this but sometimes circumstances don't allow it. Deciding on a beer at Pete's is one of these circumstances.

As I have mentioned before, one of the things I like about Pete's is not only the decent selection of beers they offer, but the fact that they change their offerings quite frequently. As a result you need to peruse the beer menu, thoughtfully posted above the bar, before deciding on what you want. 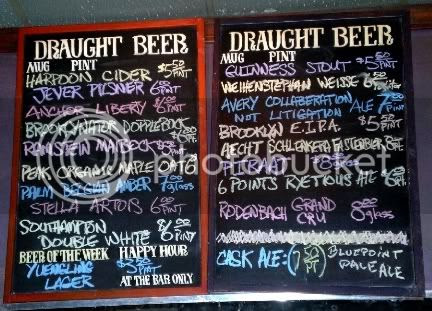 After pondering for a few minutes I decided to start with the Palm Belgian Amber, and I thought it was a good decision. Leigh Ann, the bartender, agreed . 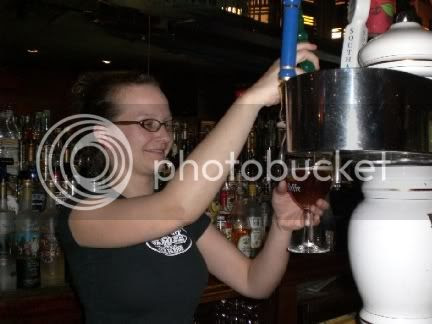 Palm is an old Belgian brewery that has been around from the 1700s so, as you might expect, by now they have the brewing process down pretty well. The Palm Amber is decently strong at 5.4% and is a nice golden color with a firm white head. Not too much hops that I could detect, but certainly not a sweet beer by any means. It was quite good.

A Palm In Hand 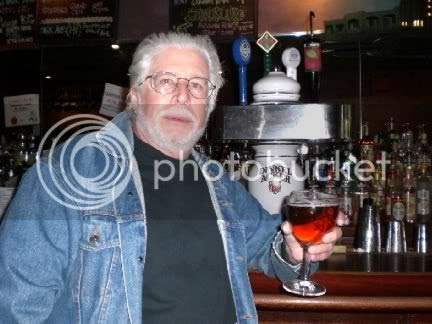 I generally like beers turned out by the Six Points Brewery located not too far from me in Red Hook, Brooklyn. When I saw the Six Points Ryetious I had to try it, and I wasn't disappointed. 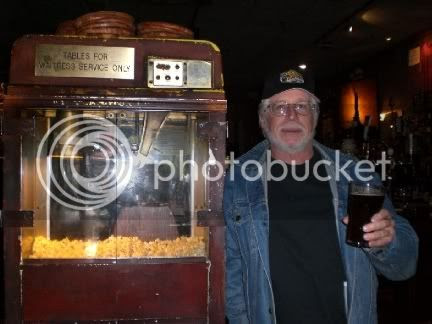 I think the Six Points Brewery is now going by the name Sixpoint Craft Ales. It looks as though they are in the process of setting up a website but as of today there is just a single page that is ready. This was a darker beer and was fairly hoppy. Not too heavy, and very drinkable.

Well, I came in for the ribs but, as always, I like to check the specials to see if anything looks particularly appealing. 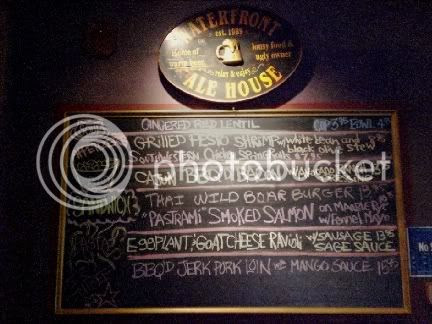 The BBQ Jerk Pork Loin looked tempting, but it had been a long time since I had the ribs so that is what I settled on. There were a couple of beers that looked like they might go well, the Aecht Schlenkera Fastenbier and the Avery Collaboration Not Litigation. Leigh Ann graciously let me have a taste of each to help me make up my mind.

A Taste Of Each 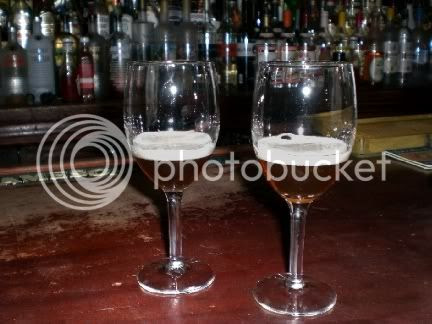 The Avery Collaboration Not Litigation pours a cloudy dark amber and my first sip let me know this was not a beer to be trifled with. It is a hefty 8.72% alcohol and the alcohol comes through this flavorful brew. Because I only had a small taste and the alcohol came through so strongly I can't say that I had enough of it to give you much more information about how it tasted. I knew having a pint of this with my ribs might not be the thing to do though.

The Aecht Schlenkera Fastenbier is brewed by Brauerei Heller-Trum in Oberfranken/Bayern, Germany. This is a nice malty beer with enough hops to give it a bit of a bite. It pours dark and has a nice smoky nose to it. It also has a nice smoky taste. I like smoky beers and this is one of the best I have had. Not over-powering, but not so subtle that you have to search for it. It was a reasonable 5.5% and I knew it would go perfectly with the smoky taste of the ribs. I was right and I ended up having two pints (well, there were a lot of ribs).

Traditionally this beer is sold only during lent and because of the nourishing yeast used to make it the German's say "Brotzeit already included" "Brotzeit" is the German word for afternoon snack.

I think I am going back today though to have a pint of the Avery and I should be able to give you a better description afterwards. That is if I stop at just one pint. I must be strong.

I envy you...you get to enjoy the fruits of your labor every day. I live in an area where we don't have such things as good ribs or good beer. I need to move to Brooklyn.

I am getting injured causes of pub accidents due to slipping up because of a greasy or wet slippery floor. according to medical reports rapid movement damage to the neck and upper body. I want to file Pub slip claim for compensation. I don't know how? What should I have to do.