A few posts back I said I would tell you about the Brasserie des Rocs Triple Imperiale that I had at a family get-together. And now I shall.

In New Jersey they have a bit more civilized approach to selling alcoholic beverages than they do in New York. In New York you buy your liquor in a liquor store. Liquor and wine and nothing else. No mixes, no beer, no snacks, no nothing. For beer you go to either a Deli, some of which have very good, if not huge, selections or you go to a beer distributor. In New Jersey the stores can sell everything, liquor, wine, beer, mixes, snacks, a bottle opener, you name it. As a result you can do one stop shopping and any decent liquor store will have a very large selection of beers. I picked up my Brasserie de Rocs Triple Imperiale at a one of these when buying the supplies needed to whip up a batch of chocolate martinis. Now, don't get on my case, my sister-in-law really likes them and I kind of like them too. I just don't think they should be called martinis. Chocolate drinkie-poos maybe. Put them in sippy-cups and give them to the kids. Makes for very mellow birthday parties.

Anyway, I picked up this beer because it had a really high rating on one of those obscure scales you have never heard of before (97 rating by the Mongolian Herdsmen at the 1999 international Yak Festival). But, as it turned out, this beer deserved its accolades. And for the observant amongst you (no religious connotation) that is indeed my brother-in-law Jim displaying the bottle.

Now you would think a brewery with a name like Brasserie de Rocs that puts out a triple would be one of those old monastery based breweries that was started by Druids or something. It isn't. It was actually started in 1979. But it is located in a small Belgian village, Montignies-sur-Rocs. The brewery is also located close to the ruins of a 12th century abbey, Abbaye des Rocs, so all is good.

The Triple Imeriale is a strong, 10%, triple ale, quite dark, thick, and hearty. The beer is unfiltered and the third fermentation is in the bottle. This gives it a nice creamy head and pretty good carbonation. It has a heavy, almost burnt, malt flavor that is offset with a nice spicy hops touch. It is a very drinkable beer even in the summer. I would imagine that it would be great sitting on a lake in September or October. The high alcoholic content does come through with a bit of warmth in the tummy, but it probably won't slow you down while drinking it. Whether that is good or bad depends. 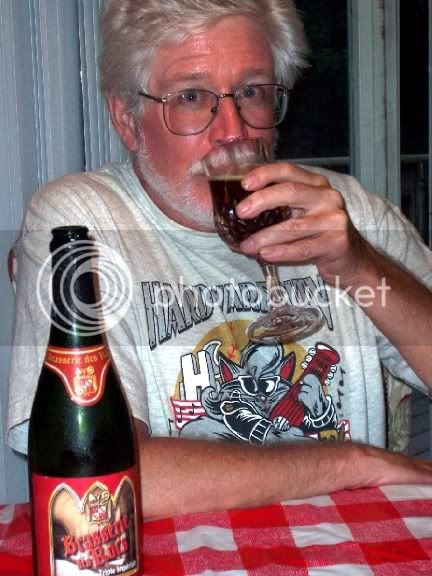 By the way, tomorrow I will be heading to Minnesota to spend some times with my friends up in International Falls and Ranier, both towns on the Canadian border, and my friends in Minneapolis. I may not have an opportunity to post again until I get back on the 28th so don't get concerned by my absence. Perhaps I will have some good stuff for your when I return. I think Sha Sha has re-opened so that will certainly be one place I will visit.
Posted by Bar Man at 1:01 PM

so now i just have to find a liquor store here that stocks it - i'm a lifelong fan of the guinness and this sounds like it's be right tasty!

too funny, you mentioned International Falls and memories of child hood bloom in my brain - I lived in Fort Frances for a coupla years.