Just time to put up one last post before heading off to catch my plane to Minnesota.

The Mysterious Chinese Woman and I decided to have our last meal in New York before departing at my old favorite, Peter's Waterfront Ale House. And, of course, I had a couple of beers to wash down that meal. As I may have said, Peter's does have a mighty fine selection that they change fairly often so you can always find something new. 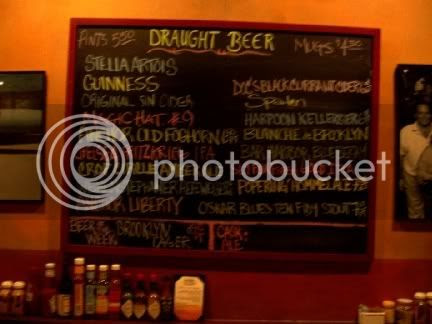 I started out with the Popering Hommel Ale to go with my salad. 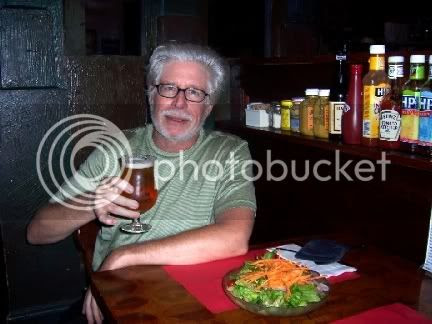 The Popering Hommel Ale is a Belgian Ale and is reasonably strong at 7.5%. It has a nice flowery, fresh hops nose to it and the hops do come through in the flavor; kind of subtle though. Certainly not like the hopped up IPAs that are out there now, although I like those too. This one has a nice maltiness to it and a bit of spiciness as well, pepper mostly. Quite good and certainly one to keep an eye out for.

I decided to go for something a bit meatier to go with my ribs and the Oskar Blues Ten FIDY Imperial Stout certainly filled the bill.

No Blues With Oskar Blues 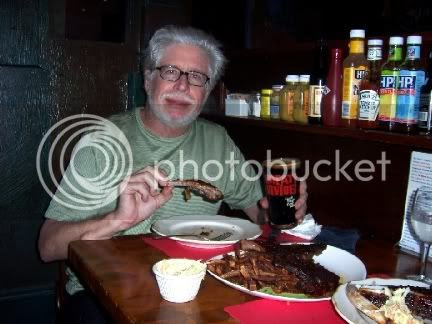 I don't know how Peter's found this one, it is brewed by Oskar Blues Grill and Brew in Lyons, Colorado. They brew a number of beers and one day maybe I will take a trip to Lyons to try a few more because the Imperial Stout was unusually good. It is a seasonal beer and not available in bottles though so it might be hard to find.

It certainly stood up to the ribs though. Flavor it had in spades. Coffee came through heavily but you could also pick up hints of chocolate and malt. It is a bit thicker than your average stout as well. I doubt if you could dump down too many of these and at about 9.5% alcohol you probably wouldn't want to either. However, I would certainly go back and have it again. They will probably be out by the time I get back from Minnesota though.

If you have this beer with a ribs like I did or with a good piece of flavorful meat like a rib-eye you won't be disappointed. It is beers like these that could give wine a run for its money in restaurants. Quite frankly, I would much rather have this beer instead of the traditional red with a lot of manly meaty dishes.

And, might I add, the ribs were flavorful indeed. The Mysterious Chinese Woman and I started out with smoked chicken wings for an appetizer. They were excellent. Then we split a single order of ribs. There were enough ribs left over to take with us to eat on the plane. Let the peasants have their banana and yogurt or whatever they get served, we shall eat like royalty.
Posted by Bar Man at 5:42 AM