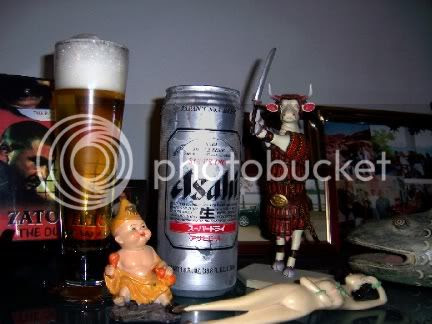 Sometimes you wake up in the morning and just really want a beer for breakfast. When that happens you want a few things; a big beer, a cold beer, and a nice crisp flavored beer. Now Asahi, a Japanese beer, has it all. It is what beers like Budweiser and Coors and all the rest should try for. Hello, you can be a lager and still have flavor. There is a reason that Budweiser has to sell under an alias in Germany where they paid a bundle to advertise themselves in the World Cup. Good Lord, German beers are actually good. How many cups of Budweiser do you think will be sold in the stadium, other than the ones to be dumped on the heads of opposing players.

I just wish one of the major breweries in the United States would actually try to add a bit of flavor to their beer. Are they really convinced that the American beer drinking public likes water with a smidgeon of alchohol?

My tirade is over. I have also discovered the perfect morning drink. Over a tall glass of ice-cubes; Two shots of gin, two shots of orange juice, top with Club Soda. Gin gives you a nice angry edge to face the day, which you need in New York. I am going to try rum when I want to be a bit more laid back.
Posted by Bar Man at 11:05 AM

Why dont you feature the little Monk in one of your beer revues?

For security reasons the Monk does not like his picture on the internet. He was kidnapped once by a very evil person and is still somewhat traumatized by the experience. Perhaps one day he will relent.

The Monk was not kidnapped. He came willingly. If he appears to be traumatized it is only because of what I believe is brain washing tactics. He did impart on me some wisdom. He advises trying Monks Flemish Sour Red Ale. I sure do miss the little guy.

Where'd you get the awesome cow samurai?