Airport Bars, You Have To Love Them

Just time for one beer in the bar at the Minneapolis Hubert H. Humphrey Airport. You have to love an airport that as you approach it has a sign saying “Airport Lane.” Silly me, I thought that meant you should get into that lane to go to the airport. No, that was just the name of a street; you had to keep going straight to get to the airport.

I ordered a Blue Moon at the bar and it came with an orange slice instead of a lemon slice. When I mentioned that it should really be served with a lemon slice I got the typical “This is the way I was told to do it” response. She wouldn’t even replace it. Jeez, sometimes I just love airport bars.

Bar Man With His Beer And Orange Slice 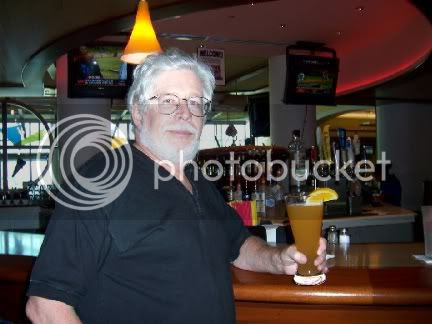 thanks for updating, dan. checking the site was beginning to make me a bit testy. oh, and i think its 'Humphrey,' not 'Humphry'

Glad you enjoyed the new material. I will change the spelling.

I've been reading your stuff since about bar 325. It has been a great trip. As a beer loving IT consultant, you have given me something to strive for. I am a transplant to Minneapolis and enjoy your Minneapolis/Minnesota entries. Lived in DM for 9 years, so your latest entry hit home.

As far as oranges or lemons in Blue Moon, I was in Chicago over Memorial Day and all four Blue Moons I had were served with an Orange. I've also been served that way in DM and Mpls. Maybe it is a midwest thing?!?!?

I miss your Daily notes! I guess it is a bit of a relief not to have to be a slave to the Blog though. I have had several Flying Fish Farmhouse Ales (similar to Blue Moon) They have all been served with Oranges, Including at an upscale Jersey Shore Restaurant. I thought it odd too, but it seems to be a common practice.