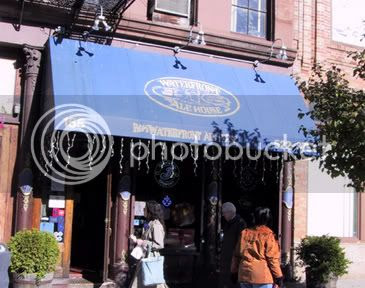 I had to steal this picture from Pete's website because there has been scaffolding up in front of the building for about a year now and I haven't been able to take a good picture myself.

Just thought I would post this because I am going to be there tonight to have my picture taken to accompany a review I wrote for The Brooklynite, a quarterly magazine that comes out in my neighborhood. They asked me to write a short, very, very short review of my favorite Brooklyn bar and Pete's was it.

Why is Pete's my favorite? Well, there are a lot of bars in my neighborhood that I like, but I have been going to Pete's the longest. I started going there when they were across the street where Last Exit is now. When they moved it was to a larger place but they managed to keep it looking and, more importantly, feeling just about the same. They have a great selection of beers, both bottled and draft, and they rotate the selections often enough so that you can always find something new and interesting to try, everything from Ebulum Elderberry Black Ale from Scotland (the last time I was there) to local favorites from Brooklyn Brewery. If you aren't sure what you want just ask one of the bartenders. They tend to be pretty knowledgeable about the offerings.

Pete's claims to have warm beer and an ugly owner but I can assure you, the beer is cold. As to the owner, well you will have to stop in and judge for yourself. They do have delicious food though and it reflects Sam the manger's interest in barbecue. He has a number of trophies that he has won in various competitions on display and they sell his homemade barbecue sauce too. It is also available to put on your food along with a wide variety of other hot sauces that sit on shelves above the tables in the dining area across from the bar.

To top it all off they have a popcorn machine where you can help yourself to a free bowl to have with your beer, or Scotch, Tequila or Bourbon of which they also have a good selection. I guess you could even have one of their specialty drinks like their apple pie vodka if you are so inclined. Not exactly Bar Man's style, but during the holidays their eggnog is good. They do make decent traditional cocktails as well, but I generally focus on the beers and ales in here. Live music on Friday nights is also a treat. My favorite is the first Friday of the month when Dmitri's Black Coffee Blues Band performs.

Pete's Waterfront Ale House can be found at 155 Atlantic Avenue between Clinton and Henry Streets. You can check out their website by clicking below.

IAre you planning on keeping this blog alive. I find your stories very entertaining.

Yes, I will continue to post to this blog, just not as frequently and the theme will be a bit different. Longer reviews of fewer bars, maybe some travel anecdotes, and perhaps pictures of bars that I visited last year before I started to take pictures and with a bit more information about them. I bought a new smaller camera that will be easier to carry around. I am heading to Mexico tomorrow and want to get pictures of some of the places that I visited last year and plan on visiting again.

Real estate experts watch "absorption rates" closely. It's a time-tested yardstick for Windwood investment. Does it prove that the Housing Bubble has already popped? Read more ....

Real estate experts watch "absorption rates" closely. It's a time-tested yardstick for windwood property. Does it prove that the Housing Bubble has already popped? Read more ....

Is your travel experience measured by the limit on your credit card?
Is your family vacation yet another 2 weeks at the in-laws because they have a "pull-out" sofa?
Have you ever had to fly unexpectedly for an emergency and ended up spending the monthly food budget?

What if you could instantly have, all in one place right in front of your eyes: all the travel hot spots, unknown travel secrets and special travel industry deals? This is knowledge that would take you years to learn on your own. Travel Cheap travel channel