I went to Pete’s Waterfront Ale House this evening to have my picture taken for the review I wrote for The Brooklynite. I wasn’t expecting it to be such a big deal. I figured somebody would show up with a camera and snap off a few photos and that would be all. It turned out to be a much bigger deal than I had expected. I am not quite sure if I was ready for my close-up. 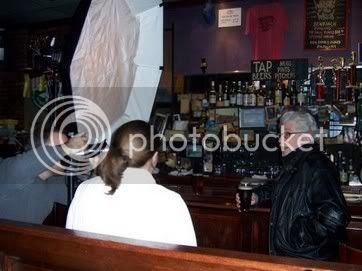 My brother-in-law Jim showed up to observe the hoopla and have a drink or two. Somehow the conversation at our end of the bar got around to the practice of giving neighborhoods cute names, usually by a developer who is trying to get higher prices. Of course New York, and especially Manhattan, has had its share of these cute names for quite awhile, NoHo and SoHo for, respectively North of Houston and South of Houston, and Tribeca for the triangle below Canal. They have been around so long they feel almost normal. Changing existing names kind of gets on my nerves though, like trying to change Hell’s Kitchen to Clinton. Even worse, in my opinion, is coming up with these cute acronyms.

Of course the name Vinegar Hill was also the result of a developer who named it that in 1800 in an attempt to attract Irish immigrants. Vinegar Hill is a rough English translation of the Gaelic term for “hill of the wood of the berries” where a battle in the Irish rebellion was fought in 1798. It must have worked because another name for the area was Irish Town and it was known as a rough and tumble neighborhood of bars, brothels, and gambling dens.

Now I live in Downtown Brooklyn and I don’t intend to ever call it anything else. I like the sound of the name. Much to my dismay though there is now an attempt to rename the neighborhood BoCoCa, short for Boerum Hill, Cobble Hill, and Carroll Gardens, three somewhat adjacent neighborhoods. BoCoCa, now that is just ridiculous. It makes it sound like we are in Miami Beach or something. Instead of wearing black people will probably start wearing Bermuda shorts and Hawaiian shirts. Of course Jim, once he realized how much I disliked the name, insisted on using it at every opportunity and proceeded to tell everyone how much he liked it. 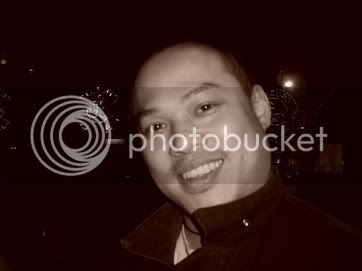 Luckily there was a nice couple next to me with whom I could have a reasonable conversation.

The Nice Couple John and Lisa 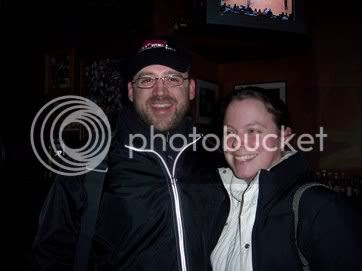 We talked about beers and bars and things like that while Jim continued to try to market BoCoCa to anyone who would listen.

As usual at Pete’s I had a couple of interesting beers that I had never had before. One was Lump of Coal, a Russian Imperial Stout brewed by Hepworth in England. The other was Mogul Madness brewed by Rogue in Oregon. They were both very good, quite dark. The Lump of Coal was kind of like a dry Guinness while the Mogul Madness was a bit sweeter with more malt. I finished the night off with a Maker’s Mark Manhattan just to verify my comment yesterday that they did indeed make a decent cocktail. Research, strictly research. By the way, they do make a decent cocktail.
Posted by Bar Man at 10:58 PM

I'm with you on the neighborhood names. They sound stupid, and you lose a bit of history with every name change. You'd think that New Yorkers would be savvy enough to ignore these contrivances, but I suppose people coming in from outside the neighborhood often don't know any better. Maybe we should just give in and rename the country SoCaNoMex.