Yesterday the Mysterious Chinese Woman and I headed off to Mexico. Took a cab out to JFK, thank goodness the snow had melted, and after checking in headed to a nice, and relatively new bar at what looks to be a new terminal. 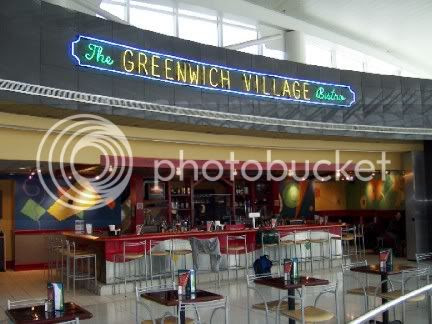 A nice cheery place with drinks that weren't over the top in price. I had a draft Sam Adams in their super-sized 22 ounce glass. 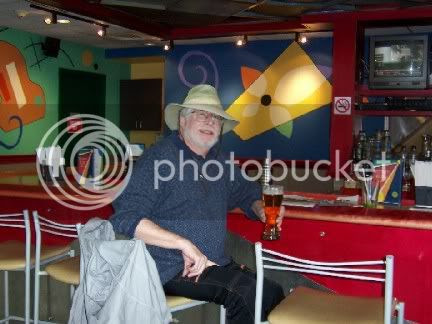 Perhaps a bit of a brighter place than I would have preferred, but quite cheery. It is in a food court setting so you feel a bit like you are drinking in a shopping mall.

We caught our plane and got to Mexico City with no problem but then we ran into a bit of a snag. They changed the procedures this year so that now you cleared customs and immigration after you got to Puerto Vallarta. In the past you had to retrieve your bags in Mexico City, clear customs and immigration, then recheck you bags before boarding your connecting flight. Well this would have been great, if they had told you about the change in advance.

We got off the plane in Mexico City and, as usual, there was nobody around to actually give you any instructions. We did as we normally did, followed the crowd and went down to immigration and customs. By the time we cleared that we had missed our connecting flight so we had to spend the night in Mexico City. This might have been fun except that it was after midnight before we got everything straightened out and got rebooked for the next day. About all we did was hit the airport hotel, quite a nice but also expensive place, and crash.

Of course when we were getting our tickets sorted out we were told that they couldn't understand how we missed our connection because nobody else had missed it. Then next day though we did run into other people who had missed the connection for the very same reason, nobody had told them about the change in procedures.

Everything is well that ends well, I guess. Aside from absorbing the cost of the hotel room and not getting into Puerto Vallarta until about 3:00 P.M. on today instead of late last night all was well. Our bags were waiting for us at the Puerto Vallarta airport so we just picked them up and jumped into a cab.

I will be posting occasionally from Puerto Vallarta so stay tuned if you are so inclined. The weather here is great and there are, as many of you know, plenty of bars and restaurants.
Posted by Bar Man at 10:13 PM