I decided to go back to PaNe e ViNo for dinner tonight, it really did look like a nice place when I was there yesterday and the bartender, manager, or whatever he was treated me well and seemed very enthusiastic about the restaurant. That is always a good sign. I also decided to check out a couple of bars that I had passed that usually open later in the evening. Unfortunately they were both hosting private parties, as were several other bars that I passed along the way. Nonetheless, I did manage to chalk up another one. 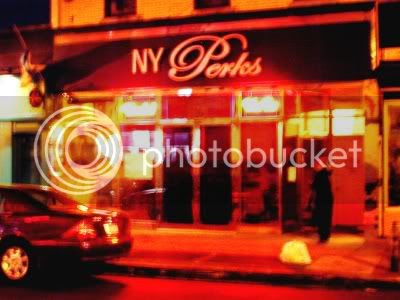 This is another fairly new place at 193 Smith Street that isn’t open during the day and wasn’t really open tonight either. There was a private party going on in the back where there is a separate bar under a fairly impressive stained glass ceiling. The manager let me buy a glass of wine there and bring it up front to drink at the bar by the entrance. This was a nice gesture but it would have been nice if he had turned on a couple of lights. I think he was discouraging non-party goers from entering, but a sign on the door would have been just as effective. As it was the only light came from the large screen television above the bar that was showing an Austin Powers movie, and not one of the good ones either. The continue switching between light and dark scenes gave of a disco effect of sorts and also gave Bar Man the beginning of a headache. The throbbing disco music provided for the party didn’t help either. It looked like kind of a dismal party too, people just sitting around and not really talking to each other. Well, it was a bit early so maybe it was just getting started. It looked like the DJ was just getting set up.

The bar up front is fairly small, just room for four chairs and it is kind of a curved, inexpensive light wood affair that wouldn’t look out of place in someone’s basement recreation-room. The area behind the bar was pretty sparse too, just a couple of plain cabinets with liquor bottles on top and a couple of shelves mounted on the rose colored wall. The smaller upper shelf held a few more bottles of liquor and the lower shelf held glasses.

There is considerable space devoted to lounge areas that consist of nice looking dark plush leather looking sofas and love seats and light wood coffee tables. My guess is that people just go up to the bars to order a drink to bring back to their little nook. Even the bar in back where there was a party going on didn’t have anyone hanging at it having a drink. It might be worthwhile to peek in again when this place is actually open, but nothing that I saw would really draw me back.

I had a glass of white wine.

Well that was just one for the night, but that was what I had planned on. I now have hit 996 for the year and have only four more to go. I probably won’t be hitting any until next week though. I am heading out for Christmas and, although we will be going out for dinner on Friday, it is to a place I have already visited. Word is that the subway strike will be over though so I won’t have any problems finishing up my quest.

Oh, just to let you know, The Mysterious Chinese Lady and I did have our dinner at PaNe e ViNo, and it was very good. I had a poppy seed encrusted tuna in some kind of a lime sauce with spinach and potatos and The Mysterious Chinese Lady had monkfish in a rich spicy soup. Service was very good and friendly too. The same guy that served me my wine yesterday was there and he remembered what kind I had and that I liked it, so I had it again. The place was packed and later on they were going to have live Brazilian music, but we didn’t stay for that.
Posted by Bar Man at 10:15 PM

Hello friendly Blogers if you are thinking about steel stairs and steel stairs Ideas for Home Construction projects. If you own a home and need to work on steel stairs then al I want to say is Yea.... I wood love to let you in on a secret about home repairs... People ask me all the time about steel stairs and they want to know simple ways to solve ther problems ...well I have the answers and If you go to http://stairs444.com steel stairs and go through the site you will find what you are looking for... what can I say butt get going ...

Your blog seems to be a perfect guide in helping opthers to develop a blof of there own. i have taken some tips from it and i hope to implement on my blog. thanxs for the help . regards . payday loans

Hey, you have a great blog here! I'm definitely going to bookmark you!
I have a gold music site.
Come and check it out if you get time :-)
Greetings.