Coping With The Strike

Well, it really wasn’t too difficult. Even though I have gone to so many bars in my neighborhood, new ones open up all the time. I found two today and passed by another two that don’t open until later in the evening. I will probably visit them tomorrow night. Then I will only have one more to hit before my scheduled appearances at bars number 999 and 1000. 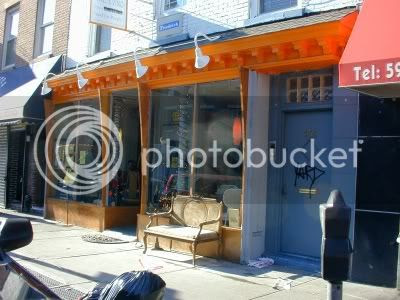 This Italian restaurant and bar at 174 Smith Street has been open for about six months now. I was a bit confused because the décor looked Italian but there was a map of Brazil on one of their flyers. It turned out that they were advertising a Brazilian night with caipirnhas and wine all night. The bar was kind of an angular U shape with the wide center area large enough for six stools with metal legs and round green seats. The top of the bar is dark wood and the front has wood paneling painted to look like green marble that is framed in wood that matches the top. There are silver rails for your feet. Four swollen tube shaped lights, two light lime green ones and two orange ones, hang low over the bar. The end of the bar closest to the front is covered with glasses and the end towards the back has a large espresso machine and a coffee machine wearing a Santa hat.

The wall behind the bar is white painted brick with wood shelves holding a small selection of liquor, several types of wine, and wine glasses. The wall opposite the bar is cream colored with a large wood-framed mirror, a picture of a landscape, and a couple of pictures, kind of sketches, of Roman statues. There is a small statue of a Roman woman clutching a toga around her in a failed attempt cover her breasts. The lights on the wall look like dark waffle cones. There is a real nice looking heated garden in the back.

I had a generous glass of red wine and, as I was getting ready to leave the bartender gave me another generous pour. He recommended that I stop in when they have their monthly wine tastings and I do believe I will. 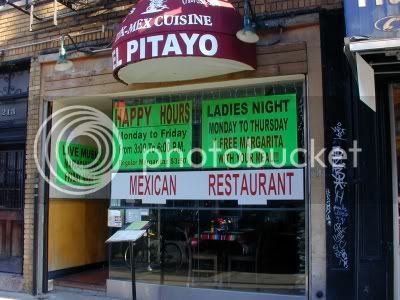 Just across the from PaNe e ViNo was this hard to miss place. And, What do you get when you convert a sushi bar to a Mexican restaurant and bar? A Mexican restaurant with a very low bar. A bit humorous when you think about it. I pictured a bunch of tough hombres walking in and sitting down on the short bar chairs and peering up at the bartender while they ordered their shots of tequila and beers. I guess you could stand, but then you would have to hunch over. It is one of those “What were they thinking?” kind of places. The top of the bar is shiny red Formica with small black and white speckles and it sits above about a four inch drop to the ledge where you used to be able to set your sushi. It is a bit low for a drink though, but when I went to set my margarita on the bar top it flopped over. I didn’t notice that set back about four inches from the front the bar it drops down about a quarter of an inch. My drink was replaced but still, what a horrible design for a bar where you might want to sit and have a drink.

Behind the bar is a set of light wood shelves below a fake brick wall. Kind of neat wood shelves hung from the ceiling against the wall with racks so glasses could be hung below them. There were a few bottles of liquor on display including a couple of decent tequilas. But if you are displaying stuff like Crystal Palace Gin and Alexi Vodka one can only wonder what you use for your well drinks.

There were a few cactuses on the bar and walls along with some colorful ponchos and sombreros. The portion of the wall between the bar and the windows was protruding flat rocks that looked like they were left over from when it was a sushi place. The lights hanging over the bar looked like the shades were made from chicken wire rolled into a tube and covered in aluminum foil Christmas wrapping paper. There were a couple of pictures of Zapata on the wall behind the bar but my favorite decoration was what appeared to be a large road kill mounted on the wall back towards the bathrooms. 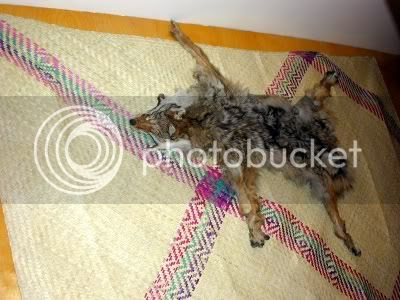 I had a margarita that, despite being told it was made with fresh lime juice, was obviously made with a syrupy mix and was way too sweet as well as being a kind of sickly green. I probably won’t be running back here for awhile.

Not a bad day, two bars close to where I live so I didn't have to walk far and two more spotted for tomorrow. Just five more to go for the year. Friday I am supposed to be heading out to my sister-on-law's house for the Christmas week-end, but if the subway strike is still going on that might be delayed a bit. We shall see.
Posted by Bar Man at 9:12 PM

Hello,
I just happened upon your blog and it's proven to be quite interesting. I run a suncatcher website at http://www.bigchimes.com and I have some deals you may find interesting this spring. I will return often to your blog and check out your new posts. Good luck and keep it going!