Another day, another block. I hit three bars on a single stretch of 54th Street between 8th Avenue and Broadway. I had a fairly decent day, right up until the end. 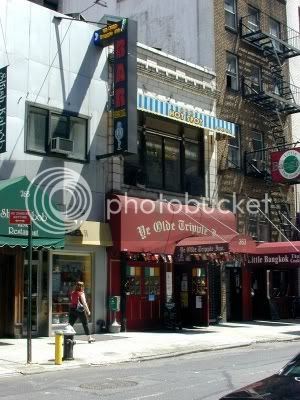 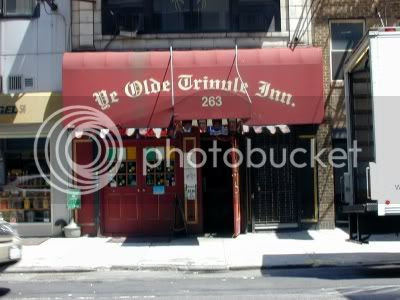 Walking up 8th Avenue from the subway I passed by a number of restaurants that had bars to find a bar bar, and I did. At 263 West 54th between 8th Avenue and Broadway is this little bar, and it is little bars like this that gets Bar Man out of bed in the afternoon. Just a friendly neighborhood bar tucked away on a busy cross-street. A beat-up, somewhat irregularly shaped dark wooden bar with a brass rail. Two ornate brass beer stations sit on the bar and they have six spigots each. Not a real inspiring selection, and not much better in bottles. They did have Pilsner Urquell and Samuel Adams Cherry Wheat though. There is an old bar back with bottles stacked on four tiers of shelves below mirrors. More bottles and coolers are down below. Evergreen garlands with Christmas balls decorate the rafters and green shamrock lights hang above the bar back. There are little unlit lanterns hanging above the bar but most of the light seems to come from neon beer signs There is a Christmas tree mounted high in the corner in the back as well as a large snowman next to a large-screen television. There is a smaller television up front.

A dartboard is set into what looks like the remains of a telephone booth. Good idea, cuts down on the number of eyes put out by ricochets. Two little tables with red and white tablecloths sit in a nook by the windows up front. More of the same in the back and in a small side room. There are also a few tables up on a balcony in the back. The walls are pretty much plastered with old black and white photos of entertainers, many of them signed. I understand they have entertainment in here in the evening but I am not sure where they perform.

I had a bottle of Pilsner Urquell. 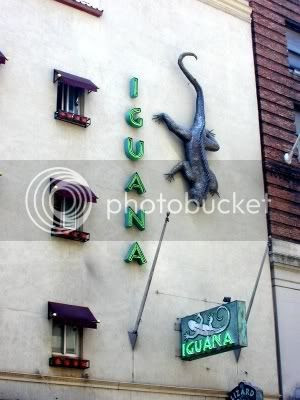 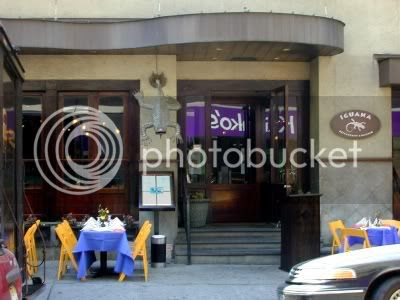 Well, not too far down and across the street but miles away in every other respect is this cavernous place, complete with a waterfall against one stone wall. Where to begin? The shape of the bar wouldn’t have been inappropriate for a swimming pool, although somewhat smaller. Nice dark wood top with green tile sides. The floor is an interesting combination of tiles and wood. Cylindrical lights made up of rectangles of stained glass hang above the bar. Over the frozen margarita machines in the middle of the bar hangs a cluster of large metal star shaped lights. More of these hang elsewhere in the dining area. These lights are reflected, to nice effect, in the large mirror behind the bar. The bar back is dark wood and flanking the large mirror are two mirror backed shelves. As you might imagine, they have a large selection of tequilas.

Festive pictures of Mexican street life adorn the walls as well as some of those chubby people by Fernando Botero. There are small round marble topped tables with stools by the front windows and a couple of square tables with chairs against the red brick wall opposite the longer portion of the bar (behind where I was sitting). A large metal candleholder sits by the door.

There is a very large and festive looking dining area in the back with a combination of chandelier-like lighting and green, yellow, and red carriage-style lights. They also have sidewalk seating but, again, on a day like this it was way too hot to sit out there.

Bar Man is predisposed to be suspicious of any bar that offers 25 flavors of any kind of drink, particularly margaritas and mojitos or, God forbid, martinis. But I liked this place, I really liked it. The bartender was friendly and I got a bowl of chips with two kinds of salsa, one green and one red. They were both very good. He tried to convince me to try a passion fruit mojito but I was resolute and just took mine plain. He was very persuasive though and if this were my last bar he might have convinced me. Maybe next time. 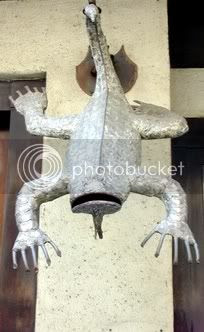 I had a plain Mojito and it was excellent. Minty and tart with lime, in a tall glass, most refreshing on a day like this. Or any day, for that matter. 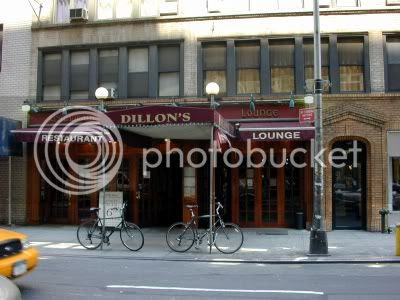 Dillon’s is just down the street from Ye Olde Tripple Inn, at 254 West 54th Street, and across the street from Iguana. It is much smaller than it looks from outside. That is because it is totally separate from the dining area next door, or at least as far as I could tell, and has a separate doorway. It has an old wooden bar and looked like it could have been a decent enough place but it had a messy look to it. A bottle of bleach and some spray cleaner in a yellow bottle sat on the bar and a half eaten meal sat next to me on the bar the entire time I was there. When I sat down there was an empty glass, a crumpled napkin, and a dollar bill on the bar in front of the one of the only open stools. Now don’t get the impression that this place was busy, they were apparently taking applications for jobs so there were a lot of people filling out applications.

There was an interesting bar back with shelves and little wooden wine racks above. It looked like something you might find in a very old pharmacy. Opposite the bar was a nice cut glass mirror above wood paneling and the rest of the walls were painted kind of a sky-blue. There were a couple of televisions showing the Mets game.

Despite the messy look about the place the bartender spent all of her time, after serving me my rather expensive drink, talking to a couple of guys at the end of the bar. Now that wouldn’t have been so bad if she had actually cleared away the dirty dishes first, or at least stashed the cleaning products, but that would have been too much trouble. In fact she said, rather loudly (as she said everything else) that the only reason she came back to work here was because she didn’t have to do anything. I can kind of see why, I doubt if they got much repeat business. Then she, and one of the customers, proceeded to trash the night shift, who were considered to be worthless, other bartenders, owners of other bars, and on and on and on it went. As you can imagine the language was a bit on the vulgar side as well. I always say the bartender makes all the difference in the world, and this one sure did. I downed my drink and headed out and will certainly never return.

I had a Tanqueray and tonic, $7.50 for the dubious pleasure.

Three bars for the day and 703 for the year leaving 297 to go. Feels like the home stretch somehow.
Posted by Bar Man at 6:08 PM

Too bad that the other two bars weren't all that great... at least you found one good one though! Someday, I will follow on that epic quest...

Oh, I liked both Ye Olde Tripple and Iquana, it was only Dillon's that I had a problem with.

God saveth the bar that cross the barman

saturn sl is another saturn sl place to check out.

Great blog, I also have a casino related site, If you want or need more exposure get casino traffic by the thousands at **casino traffic** Works for me!

Your blog is very very good. I would love you to vist bar stools and let me know what you think. Thanks

I grew up in Ye Olde Triple Inn! LOL! Lived in Hell's Kitchen 74-76...graduated from St. Clare's Nursing School. Played darts, drank beer, sang songs, made life long friends. Headed up this weekend....hope some of the crusty old regulars are still there!